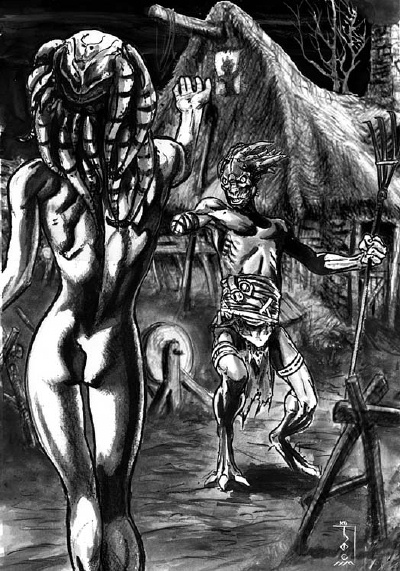 Darrak fell out of bed onto the straw, scraping the stump of his left arm. He cursed, and with his right hand, felt about in the dark for a spear. Outside the sleeping shed, the voice that had woken him continued to taunt his son.

Poor Parm! Darrak remembered what it was like to be an adolescent. He cursed the memory of his own boyhood; he cursed women in general as he stumbled into the night.

The sight of her, lit by the moons, brought him to a halt.

“Away with you,” he said without conviction. His traitorous eyes were already trapped on her six lovely breasts, her skin shining like gray silk.

Cyreen turned to face him. Her gaze dropped to his missing arm and her glossy lips sneered. “I’m doing nothing illegal here; the boy’s of age.” Then she went back to shouting for Parm to come outside, and what she promised would have made the Goddess blush.

“Away with you!” he said again, more strongly this time, for he saw that his son, unable to resist the call, had moved to the window of his bedroom on the upper floor of the house.

Darrak advanced on the woman, feeling ridiculous because in the darkness of the shed he’d picked up a rake instead of his spear. He would use it if he had to, it could hurt her, scar that lovely skin.

She laughed. “Are you going to hit me with that, half-man?” Cyreen had two of her husbands with her but they stayed outside the garden for fear of hanging. She had no such qualms and stepped forward boldly.

Darrak’s only hand shook as her scent rolled over him. He held his nerve. “I’m going to call for the City Husbands,” he said.

Her eyes narrowed. “The boy is of age. Fresh, inviting. You cannot stop me. I will have him.” She indicated the bulge in Darrak’s loincloth. “If I have this effect on you, imagine what it must be like for him only months before the Change. You cannot keep us apart.”

“Useless half-man!” She gathered her husbands to her and stalked off. “I will have him!”

Darrak retreated to the sleeping shed he’d shared with his brother husbands before war had separated them. Parm no longer stood at the window above. At that age an erection could be powerful enough to knock you out with the pain of it. No wonder so few boys made it to the Change.

“Another year, son,” whispered Darrak. “Just one more year and oh, you will be beautiful!”

Angry clouds spat rain at the streets as the boys came out of school. Darrak stood with a gang of other husbands, ready with spears and pomanders, to take Parm and his friends home to safety. As boys and men hurried through puddled streets, women’s heads appeared in doorways calling invitations. Some of the youngsters tried to turn back as if dazed, but the men shoved them into line and kept them moving.

“She came again last night,” said Parm’s friend, Rolfop. Darrak could hear the longing and fear in his voice.

“She came to me too,” said Parm. The rain had soaked the boys through to the bone. Darrak hoped it would rob last night’s memories of any heat.

“I tried to go to her,” Rolfop continued. He lifted up a scab-encrusted wrist for inspection. “But the chain held.”

He should get that wrist bandaged, thought Darrak. But it wasn’t his place to say so. Besides, Rolfop’s mother could no more afford new linen than Parm’s could new shoes for her remaining child. The war had raised taxes and stolen all husbands involved in non-essential activities. It had forced many women to pay the City to escort their children to school.

Darrak thought of his wife, the Matron, and how she’d allowed him to come home from the war in spite of his missing limb. Darrak was determined to be more than just another mouth to feed. He swore to see his son make it to the Change and become as lovely and important a woman as his mother. But the sight of a lithe female form nearby — all breasts and skin pearly with rain — stopped these thoughts in their tracks… He whirled in time to see Parm trotting off in the wrong direction.

“Back in line, you!” He whipped the spear around to catch the boy on the shoulder.

“You might need a chain of your own, Parm,” said Rolfop fondling his wrist.

The boys’ homes emerged from the drizzle one by one. Soon only four husbands stood guard over the three youngsters who lived furthest from the school — Parm, Rolfop and Eglin. By now, even the men were exhausted with tension, for while the women they’d passed were only interested in boys, the adults were far from immune and had to press pomanders soaked in male sweat to their faces. Some of them directed jealous glances at the boys and the slaps they doled out hurt more than necessary.

The group soon came to Eglin’s house, hunkered down at the bottom of a hill where other buildings clustered around it like pups on a she-dog.

“Perfect place for a snatch,” spat one of the men. He was younger than the rest and still bitter at his failure to reach the Change.

“Matron’s Council should make the City Husbands help us,” said another man with such thin eye ridges he was constantly forced to wipe rain away from his face. Nobody answered. Men who hadn’t had the decency to kill themselves when their wives died became City Husbands. They belonged to the community and kept its laws with brutal enthusiasm. Darrak would never trust them with his son.

He moved closer to Parm as the little group jogged down the hill towards Eglin’s house. A commotion awaited them. Eglin’s mother was weeping loudly while two of her husbands on leave from the war stood around in confusion. Chained he-dogs growled and strained in the garden behind them.

Her husbands raised a cheer, clapping each other on the back, pounding spear shafts against the wet earth.

“Nothing wrong with your boy — ” began a puzzled Darrak as the woman pushed through the others towards her son. But she ignored Eglin completely. Striking like a snake she grabbed Darrak’s son Parm by the hand while her husbands plowed into the exhausted guards and barged open an escape route.

“Parm!” cried Darrak. His spear was taken from him in the fray, but he managed to leap and land with all his weight against the woman, throwing both her and his son to the ground. She recovered her feet quickly even as Rolfop stepped forward to help Parm to his feet.

“Get back, you fool!” shouted Darrak, his heart hammering with fear. Too late.

The woman grabbed Rolfop by his scabby wrist and pulled him as far as her own property. She dragged her victim into the garden around her house while her husbands protected her retreat with lowered spears. Her son, Eglin, could only look on in shock.

Darrak had saved his own boy, but knew that his efforts had cost Rolfop his future. “We too have spears,” he said desperately. But she stood on her property and could laugh at his threats. One of her husbands unchained the he-dogs. They’d been trained to treat the men of the house as their pack and to protect Eglin’s mother as their mate. They snarled and snapped at the strangers.

The tall woman held Rolfop close. His nose lay level with her upper breasts, one cheek pressed against them. His eyes had turned glassy beneath their ridges and the gray of his skin had deepened in color. He shivered all over.

“You must surrender the boy you have kidnapped,” said Darrak, “The courts could have you flayed for such a crime.”

“But I haven’t kidnapped anybody,” she protested with a laugh. She looked magnificent. She was not as beautiful as Cyreen who came nightly to tempt Parm, but her body curved sweetly. Her scent floated through the rain to affect even the older men so that they were forced to breathe deeply through their pomanders.

Rolfop blinked slowly, unsure of what was being asked of him.

“You want to stay here and lie with me, pet? You want me to take you in my arms? Take you downstairs?”

“Come back, boy,” said Darrak, “It’s not too late until you sleep with her. Do you want to spend your life as a man? It’ll be the war for you for sure.” He waved the stump of his left arm, his tone bitter. “You want this to happen to you?”

Rolfop spoke in a thick voice. “I want to stay.”

And that was that. The next time Darrak saw him, he was just a man, waiting to pick Eglin up from school with the others.

The complete version of “Where Beauty Lies in Wait” appears in Black Gate 11.

4 thoughts on “Fiction Excerpt: “Where Beauty Lies in Wait””