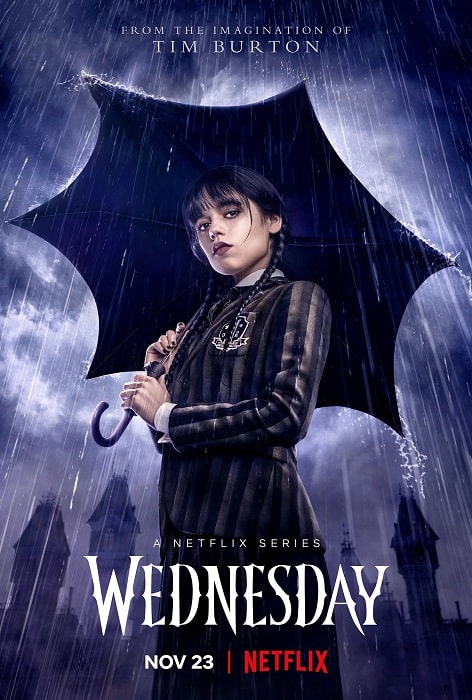 Appropriately, Netflix launched its new mega-hit series Wednesday on the Wednesday before Thanksgiving. This was brilliant marketing even though you might have suspected this gothic, Tim Burton creation would have been better suited for release in October. Instead, a late November release capitalized on the fact that most of us would be in some sort of carb coma Thanksgiving weekend, unable to move anything but the finger it would take to operate the TV remote. We would, therefore, be more than happy to roll up on the couch and binge-watch.

And much as it pains me to say it, the marketers were right. 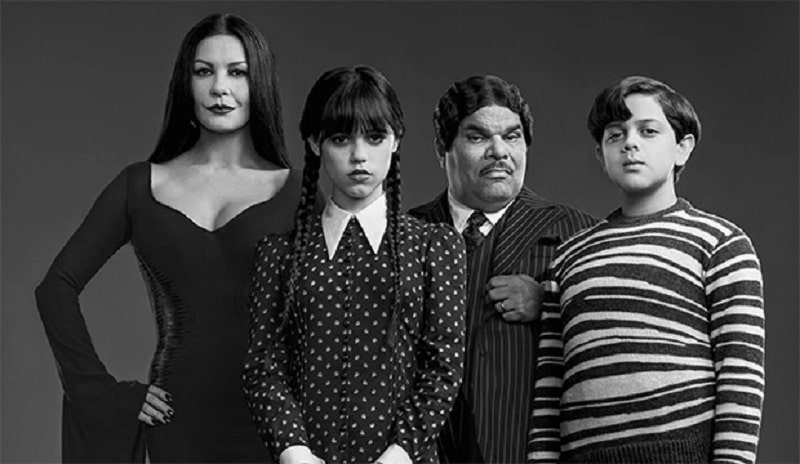 It’s fairly certain that if you’re here at Black Gate, then you’re also the sort of person who has likely already heard about, if not already watched Wednesday. But just in case, here are a few fun, non-spoiler facts:

Admittedly, Wednesday hits me where I live which explains why I’m already on my second viewing. For a goth chick (or most anyone for that matter) there is absolutely nothing not to love about this series. 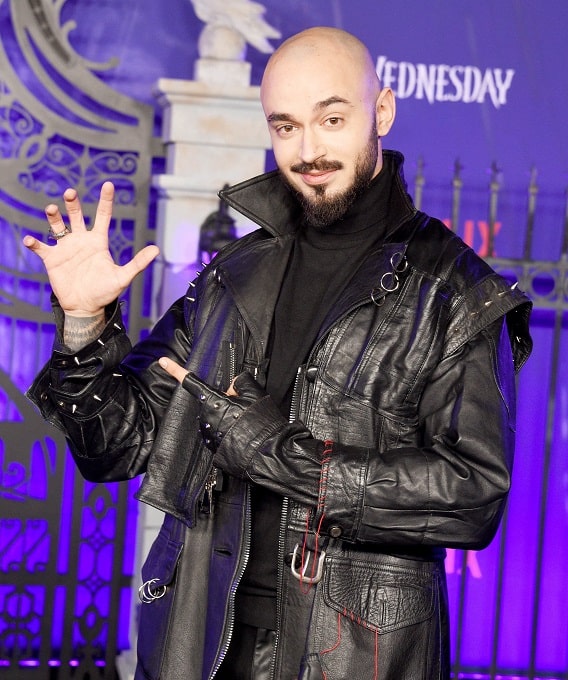 It has the nostalgia of the original characters, the broodingly beautiful sets that Tim Burton is known for, and a whole lot of depth of character masterfully hidden behind black humor and a murderous plotline. And without giving anything away, one of the very best things is Thing, the iconic Addams family hand, who is tasked with watching over Wednesday at school by Gomez (Luis Guzmán) and Morticia (Catherine Zeta-Jones). Hard to believe the incredible range of emotion demonstrated by a disembodied hand, but kudos must be given to Victor Dorobantu, actor, magician, illusionist, and the body behind Thing. 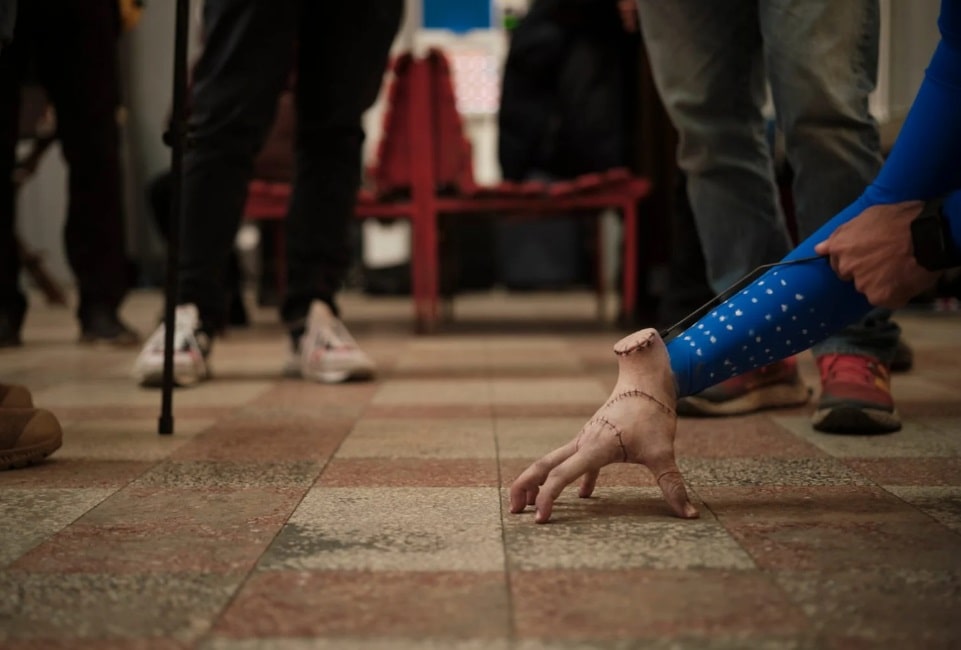 Tim (Burton) wanted it to be an actual actor like they did in the ’90s films, so it was this magician named Victor (Dorobantu). He would wear a full blue suit, and he would hide behind walls and underneath beds. Then they built this prosthetic on top of his hand so that it looked like a wrist knob, and he would walk around. Tim really liked his mannerisms, and he would spend hours in hair and makeup every day just getting that hand on.

I may need to go out on a limb here and say that Thing was my favorite character in Wednesday aside from Wednesday herself, and was responsible for the scenes that made me laugh the hardest. 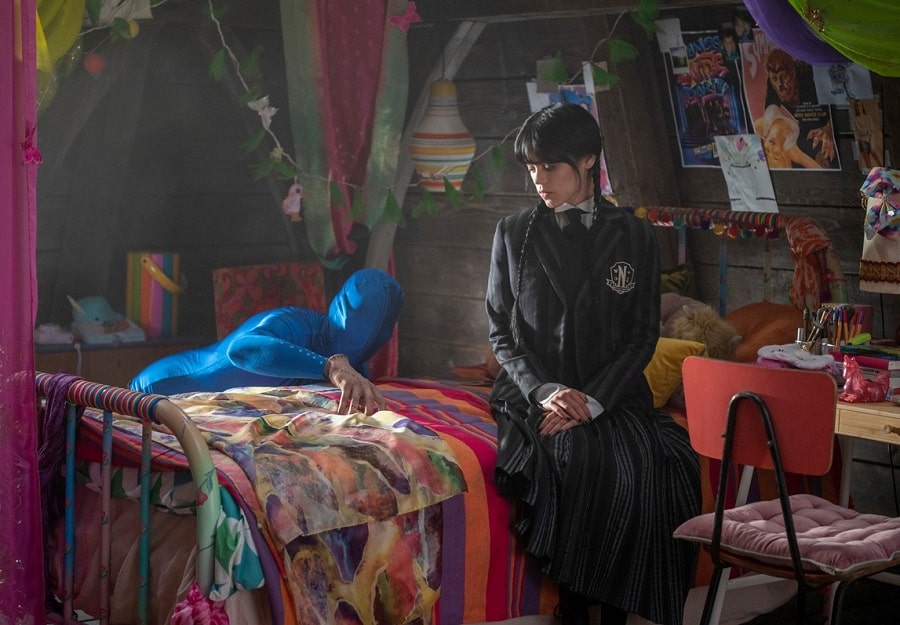 The idea that Dorobantu was physically up behind Ortega in many of their scenes is on its own, hysterical. It is my sincere hope that Amazon creates a Thing version of Alexa; an animatronic hand that galumphs along behind me on its fingers and does my bidding. I’m not even asking for a “real,” sentient severed hand who will watch over me and be my sidekick… yet.

Wednesday is currently streaming on Netflix and word on the grapevine is that it has already been greenlighted for a season two.

And that is a thing of beauty…

Better than I had hoped for.

man oh man i had (or still have) a huge crush on Christina Ricci and have always loved the goth life though i was never a true one. but the attitude i have always celebrated,

only up through 4 right now, and while i dislike most things tim burton, this one is great so far, little too high school but my wife loves it so i am happy to watch with her.

Dante, Mr. Goth Chick agrees with you. He said it was like watching a Halloween special on the CW (though how he knows that is a bit peculiar in its own right). Hang in there with your missus, she’s got good taste and Ms. Ricci doesn’t disappoint either.

I dunno. Like a child who seared his hand on a hot stove, after Planet of the Apes every mention of the name Tim Burton inspires in me an automatic “shrinking back in fear and revulsion” response.

My dear TPark, though it was difficult to forgive Mr. Burton for that, Dark Shadows and (shudder) Charlie and the Chocolate Factory; Sleep Hollow, Sweeny Todd and (especially) Beetlejuice mean I at least give Burton a 15 minute chance. He knocked it out of the park with Wednesday – trust your favorite Goth Chick…

Fess up. How many of you have called one of your younger female relatives “My Little Scorpion” since watching this series? I said this to one of my grandnieces after she and her sisters had binge watched the series with their father and she laughed in my face saying “I can’t wait to wreak upon you the vengeance you deserve, Uncle John.”

JB, I might have chosen to have a little scorpion of my own, if I could have ensured it would have as a quick a wit as that. Lucky man…

She’s eleven years old, reads Shakespeare and is taking fencing lessons. Although I suspect my niece had a hand in her reply, she and her husband have done a heck of a job with all three of their daughters. God bless them.