No, your eyes don’t deceive you. That’s a brand new Elric novel, arriving in hardcover next week.

Described as a prequel, The Citadel of Forgotten Myths takes place between the first and second books in the Elric Saga, Elric of Melniboné (published a whopping 50 years ago, in 1972) and The Sailor on the Seas of Fate (1976). It’s the first new Elric novel since The White Wolf’s Son, way back in 2005, and is highly anticipated.

Because of Moorcock’s stature in the field these days, the back cover of his new novel is strewn with glowing quotes from J. G. Ballard, The New Yorker and NPR — and I have to admit, that NPR quote is pretty darn good. It’s taken from a 2014 piece titled (of all things) These Nautical Reads Will Put Wind In Your Sails, and is written by novelist Jason Sheehan. Here’s the whole thing; it’s worth the read. 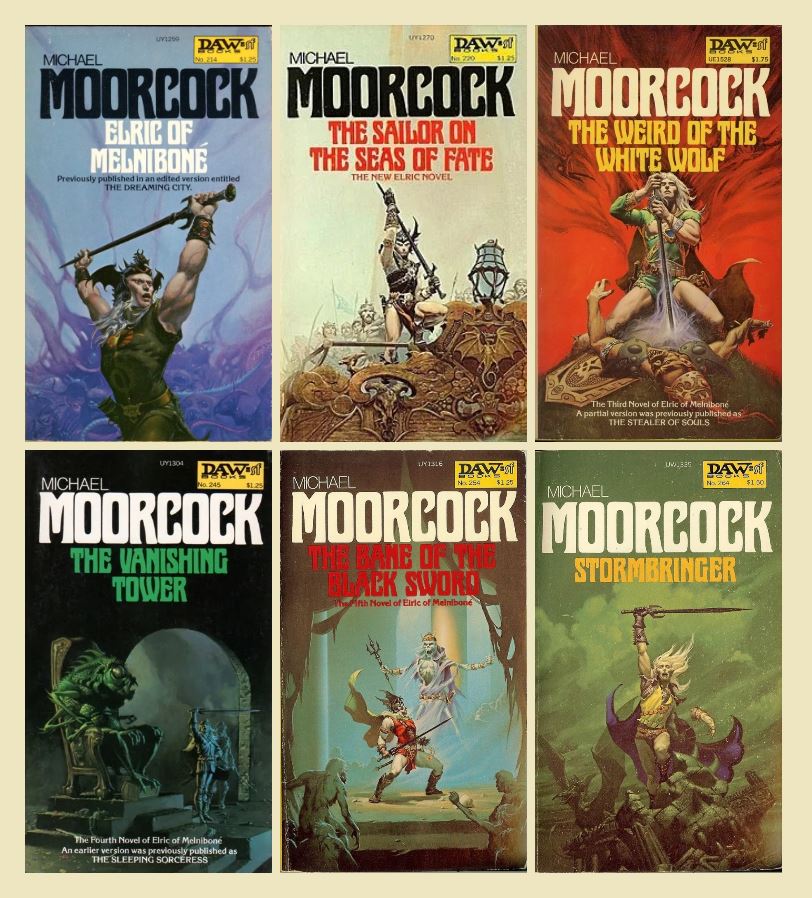 In the long litany of sword-wielding mass murderers that populate the pages of a thousand lesser fantasy novels, Elric of Melniboné is far and away the coolest, grimmest, moodiest, most elegant, degenerate, drug-addicted, cursed, twisted and emotionally weird mass murderer of them all. Elric, though, is nothing without the trappings of the fading and debauched land from which he fled. There are magical swords and Old Gods, evil sorcerers and heroic companions, sure. But the most awesome moment comes when the Melnibonean navy takes to the seas (accompanied, of course, by flights of dragons) in its pyramid-shaped golden battle barges, destroying the fleet of reavers Elric has brought home to punish the corrupt land that spawned him.

What’s The Citadel of Forgotten Myths about, then? Here’s a snip from the Publishers Weekly review.

Leaving the Young Kingdoms after betraying his own folk, Elric and his companion Moonglum travel to the World Below where a segment of Elric’s people, the Melnibonéans, settled alongside the dragon-like race known as the Phoorn. Quickly embroiled in Phoorn family squabbles, Elric survives but loses his prize sword to Chaos Lord Xiombarg, Queen of the Swords. This loss comes back to haunt him when he must defend a valley of apparently peaceful Melnibonéans against Xiombarg’s conquering horde… Longtime fans will find plenty that fascinates in this return to the long-running series. 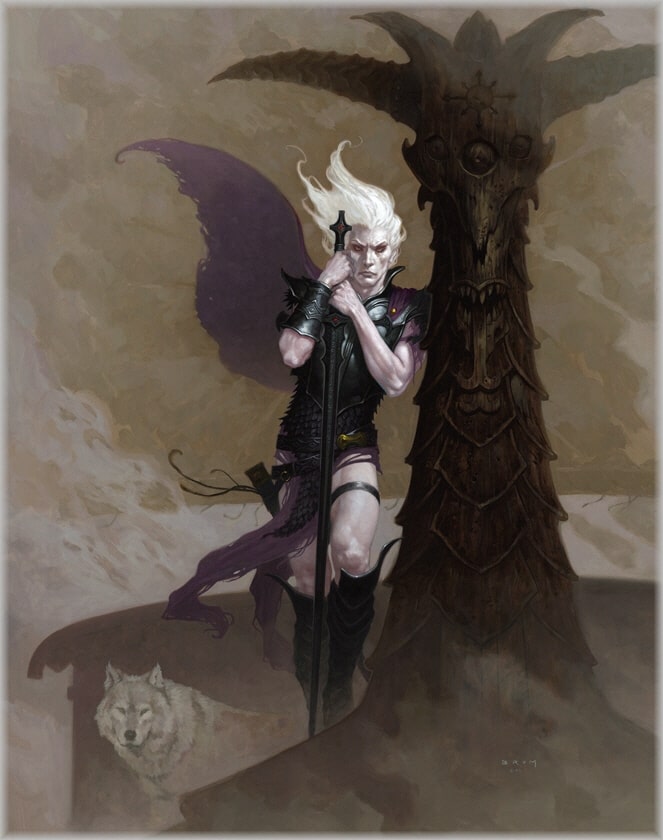 The cover for the Saga Press omnibus Elric of Melniboné by Brom. Published February 15, 2022

Steven H Silver tells us the cover artist for The Citadel of Forgotten Myths is Brom, who’s also done several exquisite Elric portraits recently, including the cover for the fat Elric of Melniboné omnibus edition published by Saga Press earlier this year (and containing three novels, Elric of Melniboné, The Fortress of the Pearl, and The Sailor on the Seas of Fate, and one collection, The Weird of the White Wolf).

But I’m not sure it is Brom, and I can find no credit on the publisher’s site or anywhere on the web. I’ll leave it as ‘unknown’ for now.

The Citadel of Forgotten Myths will be published by Saga Press on December 6, 2022. It is 336 pages, priced at $28.99 in hardcover and $14.99 in digital formats. The cover artist is unknown (maybe Brom? I dunno.) Read an excerpt from the first chapter here.

See all our recent coverage of the best new upcoming fantasy here.

The Publisher’s Weekly summary covers the plot of the novelette Red Pearls, from 2010. Is this novel an expansion of Red Pearls? Or is Red Pearls one of a collection of short pieces mashed up into a novel (like most of the original six books)?

Excellent questions Alec. My guess is the former, but I have nothing but guesses at this point. We didn’t receive an early copy and we’re waiting for next week like everyone else.

I don’t think it’s too much of a stretch to think Moorcock took the “Red Pearls” short story (published by Lou Anders and Jonathan Strahan in their terrific 2010 anthology SWORDS & DARK MAGIC: THE NEW SWORD AND SORCERY) and used it as the start of his new novel. 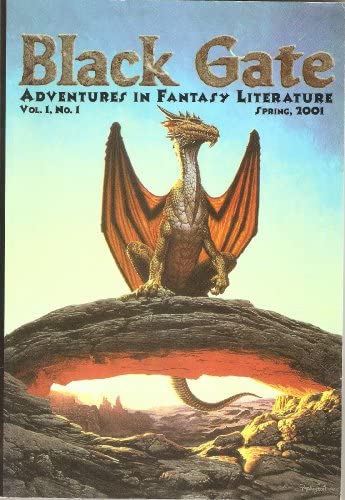 I thought that was a Von Beck? Frankly found it to be the worst part of issue 1. Pompous and somewhat boring. Rest of issue 1 was awesome.

I enjoyed the story very much — but obviously, your mileage may vary. 🙂

And we certainly agree that the rest of the issue was awesome! The Jeffrey Ford story “Exo-Skeleton Town” won the top prize in the 2006 Imaginaire awards, and is one of our most reprinted stories (at least four times, by my count). Richard Parks “Golden Bell, Seven, and the Marquis of Zeng” was reprinted in David Hartwell’s YEAR’S BEST FANTASY, and Charles de Lint’s “Wingless Angels’ got more mail than any other story that issue. It was a hugely successful launch, and definitely set us on the road to success.

I enjoyed the first two Von Bek novels, the first more then the second but couldn’t work up interest for the rest.

I am certain I have read book II another anthology. I think they are three standalone stories loosely connected by the setting on the other side of the world.

I think there’s some question as to where this actually fits into the existing Elric saga — Elric doesn’t meet Moonglum until relatively late in the series. When they describe it as falling between the first & second books in the “Elric Saga”, I’m guessing that means between the first & second _collections_ published by Saga Press, i.e., between Weird of the White Wolf and The Vanishing Tower; but there’s been some discussion on the Whetstone Discord server that it might actually fall somewhere in the _middle_ of the second Elric Saga collection.

Well regardless, I’ll be more than happy enough to work it all out for myself once it’s released.

I agree Joe. Having just read my way through the ‘entire” series, he definitely only met Moonglum after Sailor n the Seas of Fate.

Hmm — that’s very helpful, Joe. And yeah, I puzzled over that “between the first & second books in the Elric Saga” identifier too. I figured it probably meant the order the original DAW paperbacks were published (which is in itself very different from the original publication dates), but that was probably old-school thinking. The first and second omnibus editions published by Saga actually makes more sense.

Ah well — nothing like a good mystery to sharpen anticipation for a book! 🙂

If he’s left Zarozinia behind, wouldn’t that imply that this takes place after “Kings in Darkness” and possibly “The Flame Bringers?

Which one, Bob? The Oona Von Bek novels, like The White Wolf’s Son? Or before that?

‘Fortress of the Pearl’ is when I began losing interest in Elric.

Exciting!
The cover looks awesome. Brom, possibly, I am no expert but it does have a certain look. Would have been great f the could have pulled one of Rodney Matthews’ pieces out the archives, no disrespect to this great art cover.

Funny this book should come out now. I had shied away from reading Elric for no tangible reason for so long, but when Fletcher published his re-read of Stormbringer here: https://www.blackgate.com/2022/07/23/carving-out-destiny-emstormbringerem-by-michael-moorcock/
I finally decided to bite the bullet and have been reading the series from start to where my books run out (Elric at the end of Time). I don’t have The Fortress of the Pearl or The Revenge of the Rose – yet.

Interesting note, the copies have are the Grafton UK early 1980’s editions, except for Stormbringer which is an old mayflower. the covers are all the same as the DAW’s, but in different order. Think the only common one is the Vanishing Tower.

Fletcher’s article inspired me to do a re-read as well, though I didn’t get as far as you did. I got through the first half of ELRIC OF MELNIBONÉ before I was called away to other duties.

I suppose the mystery of the cover artist will be solved when the book finally appears as well!

Bring it! I could use another dose of Elric.

Me too — but I still haven’t read anything after STORMBRINGER, so I’m not totally caught up yet either.

Criminy! I though I was done with this cursed yarn! What did Michael Corleone say? “Just when I thought I was out, they pull me back in!”

LOL. Yeah, ain’t that the truth.

The ‘Citadel’ cover is definitely not Brom. He style is quite distinctive.

True enough — though the cover for Elric of Melniboné (above) I wouldn’t have pegged as Brom either. His Elric work seems to be a departure from what I would consider classic Brom.

Still, THE CITADEL OF FORGOTTEN MYTHS doesn’t strike me as Brom. It’s missing his distinctive signature, for one thing.

The Brom has his hallmark alien/demonic humanoid quality, perfect for Elric, and the ship’s prow and brushwork for the mist and spirit forms does as well. I loved the cover he did for Tales of the White Wolf. It was a personal favorite of mine out of hundreds of excellent pieces through his decades of work.

[…] was hoping for a review, but it wasn’t to be—John O’Neill has spotlighted the new Elric novel in his Future Treasures series, but only to call attention to its release next week. (Is your […]

I know what I am getting for Christmas

I am enjoying listening to the Audible edition Citadel of Forgotten Myths during my gym workouts. I have read them before. Book I appears in the anthology Swords and Dark Magic: The New Sword and Sorcery Edited by Jonathan Strahan and Lou Anders with the title Red Pearls.

I am just at the beginning of book II and I am sure I have read that before as well though I can’t determine where.

So it isn’t exactly a brand new novel but rather three (or at least two) loosely connected short stories. That said I am thoroughly enjoying them in audible format and will probably grab the Kindle edition at some point.

“Moorcock’s ability to convey action vividly, to envision otherworldly vistas, and to couch it all in elegant prose remains undimmed. I mentioned Lord Dunsany as a predecessor for Moorcock, but I would also have to enter Clark Ashton Smith as an inspiration and coequal. This alliance extends to Moorcock’s great ability to conjure up names, although I did object to one such: the evil Ramada Sabaru. The given name, of course, instantly evokes a hotel chain, while the surname echoes a carmaker. But aside from that, all is Vancian perfection.”