Kerstin Hall is the Senior Editorial Assistant at Scott Andrews’s excellent online magazine Beneath Ceaseless Skies, and perhaps it was years of reading submissions that gave her the chops to write her acclaimed debut, the Tor.com novella The Border Keeper, a 2020 Nommo Award Finalist. (Yeah, I didn’t know what a Nommo Award was either, but I googled it and it’s legit — it’s presented by The African Speculative Fiction Society.) The Guardian called it “A phantasmagorical picaresque through a lushly realised underworld, populated by a grotesque bestiary of fantastical creatures… [a] twisty example of the new weird,” and Max Gladstone summed it up as “A labyrinth of demons, dead gods, [and] cranky psychopomps.” That sounds pretty cool.

The Border Keeper appeared in 2019, and the follow-up Second Spear arrived in August. Looking at the covers above, radically different in design and tone, the two books don’t look related (at all), but they are both part of what’s now being called The Mkalis Cycle. I much prefer Jamie Jones’s dynamic cover for Second Spear over Kathleen Jennings’ more abstract effort for The Border Keeper, but I gotta believe the dramatic cover shift was risky, and probably confused a few readers. I hope it pays off.

Martin Cahill at Tor.com, who’s demonstrated an unbiased eye in the past when reviewing titles released by the mothership, doesn’t rein in his enthusiasm this time. Here’s an excerpt from his rave review for Second Spear.

In Kerstin Hall’s debut, The Border Keeper, we met Eris (the border keeper in question), and a man named Vasethe who needed her help crossing the border she kept. Which border is that, you ask? Why, the ways into Mkalis, the 999 realms of the afterlife — a multiverse replete with gods, demons, monsters, magic. Each realm is ruled by larger than life figures of myth, all involved in a delicate balance, lest the entirety of Mkalis fall in on itself.

Hall’s second installment in the realms of Mkalis focuses on a handful of new characters, but this is a sequel, not a standalone. Tyn, a soul who in death has found herself the Second Spear to a demon ruler, questions who she used to be in life, and what she must do now to save her ruler and realm.

Second Spear primarily follows Tyn as she reels from knowledge she gained in The Border Keeper: Vasethe knew her when she was alive… Stuck with the First Spear and a new, sullen recruit, Tyn must traverse the realms of Mkalis to find an answer to the conquering tide of an old enemy, while also coming to terms with her fracturing identity.

With the Mkalis Cycle books, Hall has literally hundreds and hundreds of fantastical stories she could tell across the 999 realms. And so far, based off of her first two stories in these multitude of realms, she’s having an absolute ball as she ricochets from realms of flame to realms of horror, from clockwork nightmares to mind-obliterating feasts, fog that lurks for souls, forests that yearn for bodies, and more and more. Pairing her intense and bountiful imagination alongside her rich prose that sings with momentum, each single sentence doing the work of ten, there is no way that anything Kerstin Hall creates won’t leave a lasting image in her readers’ minds…

Second Spear is an invitation to the beautiful, haunting, and raucous mind of Kerstin Hall, a writer who I trust to light the candle of my imagination and see me through, time and again. Tyn’s journey is enthralling as she struggles to make sense of the life she found after life, and as she bounds from realm to realm, understand she is not shackled to any destiny but the one she chooses. So far we’ve had two stories in the realms of Mkalis, and I hope we still have nine hundred and ninety-seven more stories to come.

Tor.com generally specializes in novella-length releases (usually 90-150 pages), priced accordingly. The Border Keeper and Second Spear are both a lot closer to novel length (234 and 288 pages, respectively), but the price for the first is still in line with their usual novella releases ($14.99). That’s a bargain in my book, and a great way to get introduced to a popular new series.

Get all the details on The Border Keeper at Tor.com here, and read an excerpt from Second Spear here.

See all our recent coverage of the best new series fantasy here.

I read the first chapter on Amazon. Sold.

Nice! Thanks for letting us know. Did you read the first chapter of THE BORDER KEEPER or SECOND SPEAR?

That second cover is undoubtedly much better / cooler, but it might not be such a risky change as all that. It strikes me as aiming squarely at a “Gideon the Ninth” kind of vibe — successfully I’d say — and as such seems a good tactic for snaring readers, given that work’s massive popularity.

I had to look it up. A psychopomp is a guide for the soul in the underworld. Like Charon, I guess, or Virgil in Dante’s Inferno. (I love the fact that there’s a word for that.)

I hadn’t picked up on the GIDEON THE NINTH vibe in the cover art, but now that you point it out, it seems obvious. Tommy Arnold’s terrific cover art for GIDEON THE NINTH has influenced a LOT of books over the past two years. 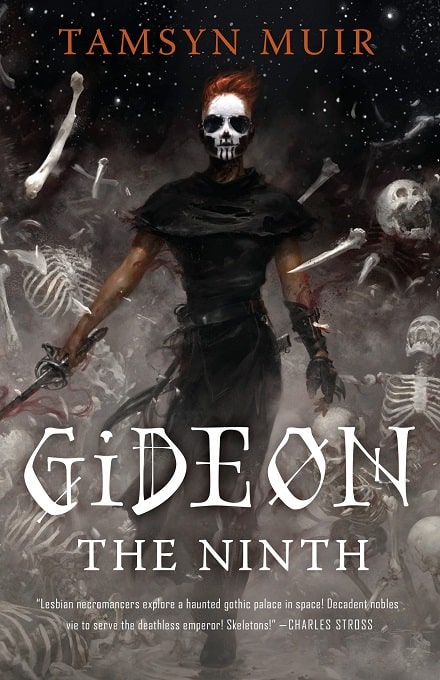 Well, I’ll be damned (which, hey, means I could soon meet a psychopomp). Thanks for relaying the definition, that’s an utterly new one to me. Definitely agreed the word’s existence is cool.