Recently I’ve been on a steady diet of anthologies from the most respected SF editors of the 20th Century, including Isaac Asimov, Terry Carr, Mike Ashley, Lin Carter, and Karl Edward Wagner. And I cannot lie, it’s been a blast. I’ve been thoroughly enjoying classic tales by some of the best storytellers in the business, from A.E. van Vogt to Lucius Shepard.

But it’s time to branch out! I dunno, be intrepid. Try some new editors, maybe. Like Jack Dann, who’s produced over 50 SF anthologies in the past four decades. I recently picked up a copy of his very first, Faster Than Light, co-edited with George Zebrowski in the distant year of 1976, and it piqued my curiosity immediately.

It purports to be  a serious study of the problems and possibilities of FTL travel, with five highly-regarded essays on the topic by Isaac Asimov, Arthur C. Clarke, Keith Laumer, Ben Bova, and Poul Anderson, plus the first appearance of Harlan Ellison’s original teleplay for the TV show The Starlost, Phoenix Without Ashes, and original stories by Poul Anderson, Ian Watson, Chelsea Quinn Yarbro, Gregory Benford, Hal Clement, A. A. Jackson and Howard Waldrop — and two long stories by George R. R. Martin.

In their intro to Faster Than Light, the editors suggest that the discover of FTL drive will be spurred on by science fiction, in the same way early rocketry development was inspired by SF of the 20s and 30s.

A number of series writers on astronautics have said that science fiction now stands in relationship to interstellar travel as it did to space travel and rocketry in the 1920’s and 30’s. As was the case with space travel of the local variety, star travel is increasingly the subject of much “premature history” in articles and books which often seem more imaginative than the stories and novels which introduced the concept a half century earlier. There is an interestingly complex relationship between science fiction and real-world innovation, one which goes beyond specific prediction (which is impossible)…

In editing this book, we have tried to get writers to see the subject freshly, in terms of the newly emerging indications of the last dozen years. Some of these these indications are staggering. Our entire picture of the universe has changed. An entire cosmos has died. The new one is full of mysteries and new puzzles: quasars, black holes, tachyons, new forms of matter, superspace — these are only a few of the new things. Old SF notions like FTL, antigravity, even time travel (often considered hopeless by SF writers) have turned up in serious scientific journals. A whole generation of scientists which grew up on science fiction is now seriously examining concepts discarded by many SF writers….

Think of unrestricted access to the entire universe of stars-like-dust and galaxies-like-grains-of-sand; swift travel to as many worlds as there are people on Earth now. The tyranny of space-time may be considerably weaker than our technology. It is already weaker than our disciplined imaginations.

Will we suddenly find ourselves as natives in canoes paddling to the shores of more advanced cultures? Is there a galaxy-wide culture which is placing bets on our survival? The writers here have tired to take your breath away, but also to make you think as well as wonder. They have not tried to make you see yourself on this tiny Earth. The grand picture of Earth from the Moon taken by the Apollo astronauts has done that much too thoroughly. Rather, the writers of these stories have tried to make you see the sun and its planets as a tiny neighborhood in the vast lighted city of our galaxy.

The whole introduction is well worth reading. To do so you’ll have to track down a copy, but to further whet your appetite I’ve uploaded the first four pages here. 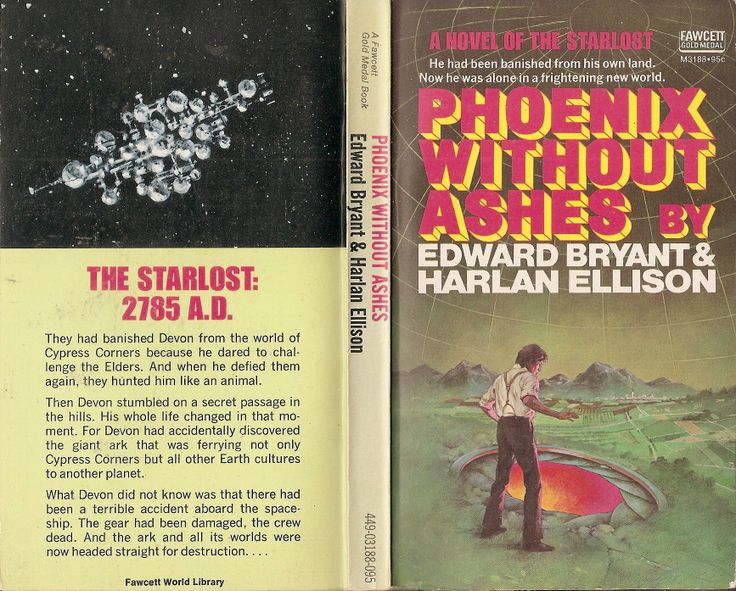 Ellison’s 80-page teleplay Phoenix Without Ashes was filmed in Canada as The Starlost and broadcast on CTV in Canada in 1973 and syndicated to local stations in the US. I remember it well, and still remember watching it with my father in Halifax, Nova Scotia when I was nine years old. The teleplay was eventually novelized by Ed Bryant and released under the original title Phoenix Without Ashes by Fawcett Gold Medal in 1975.

The version included here is accompanied by seven B&W full-page illustrations by artist Tim Kirk. There’s also a 2-page afterword by Ellison that claims his teleplay is brilliant, and squarely lays all the blame for the failure of the show on the “masters of disaster,” i.e. all those involved with production not named Ellison.

Faster Than Light was originally published in hardcover by Harper & Row in 1976. The paperback appeared in the US six long years later — long enough that the Contributors section required an update. Interestingly, they didn’t replace the old one — there’s simply an expanded Contributors section tacked on after the old one, which seems like sloppy editing. But we don’t throw stones (except at Ellison, I guess).

For those who like reading projects with logical themes, the editors have also compiled a two-page recommended reading list of novels and stories (exactly one dozen each) with the theme of Interstellar Travel, plus nine nonfiction pieces and two articles.

Here’s the complete TOC for Faster Than Light.

Dreaming Again: Introduction, by Jack Dann and George Zebrowski
The Ultimate Speed Limit, by Isaac Asimov (The Saturday Review, 1972) — non-fiction
Possible, That’s All!, by Arthur C. Clarke (The Magazine of Fantasy and Science Fiction, October 1968) — non-fiction
The Limiting Velocity of Orthodoxy, by Keith Laumer (Galaxy Magazine, December 1970) — non-fiction
But What If We Tried It?, by Ben Bova (original to this collection) — non-fiction
“Sun Up” by A. A. Jackson, IV and Howard Waldrop
“Dialogue” by Poul Anderson
“Longline” by Hal Clement
Phoenix Without Ashes, by Harlan Ellison
“The Event Horizon” by Ian Watson
“Nor the Many-Colored Fires of a Star Ring” by George R. R. Martin
“Dead in Irons” by Chelsea Quinn Yarbro
“Seascape” by Gregory Benford
“Fast-Friend” by George R. R. Martin
Hyperspace, by Dick Allen (Edge, Autumn/Winter 1973) — poem
Our Many Roads to the Stars, by Poul Anderson (Galaxy, September 1975) — non-fiction
The Contributors
A Selected Bibliography: Interstellar Travel

Faster Than Light was published by Ace Books in March 1982. It is 342 pages, priced at $2.95. The cover is by Attila Hejja. It has been out of print for 40 years, and there is no digital edition.

But the first edition was a hardcover from Harper & Row in 1976. (Which I have.)

True! But that edition has the most boring cover in the history of literature. Also, since it took six years for the paperback edition, the paperback contains the expanded CONTRIBUTORS section, so of the two I prefer the paperback. 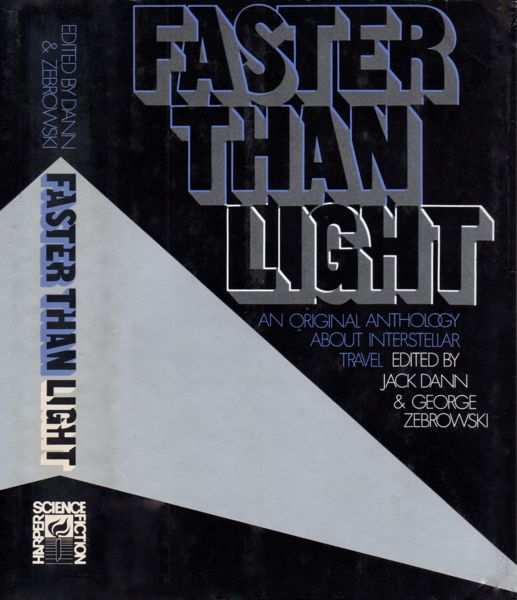