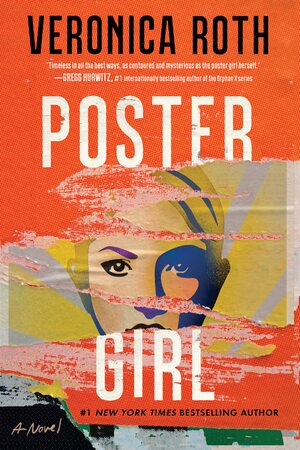 Veronica Roth is the author of the hugely popular Divergent trilogy, adapted as an ill-fortuned 4-part film series that was canceled after three installments (Divergent, Insurgent, and Allegiant, Part One).

That’s the kind of thing that might sour me on the writing biz for good, but Roth has carried on admirably. You can’t blame her for losing her taste for young adult fiction though, and in the last few years she’s turned her skills to adult novels with the dark superhero tale The Chosen One, and her newest, Poster Girl, an SF noir.

Elisabeth Egan at The New York Times has one of the better long-form reviews, calling it “a fun, read-it-in-a-weekend novel, one that pairs well with Halloween candy, spiked cider and a smattering of neighborhood gossip.” I like the sound of that. Here’s her take.

The book takes place in a future post-apocalyptic Seattle — one that hasn’t been altered by a hurricane, a flood or a pandemic, but by the greed and malfeasance of its former leaders, known as the Delegation… Enter Sonya Kantor, who was raised by Delegation die-hards and implanted with spyware from birth… Eventually it accompanied her to a photo shoot where she had her picture taken for a black-and-white Delegation poster printed with one of the regime’s slogans: “What’s Right Is Right.”

In the decade since the Delegation was defeated by the Triumvirate, Sonya has been imprisoned in the Aperture, an apartment complex surrounded by barbed wire where people associated with the bad guys must live out their days… Sonya’s family and her betrothed, Aaron, have been killed by the Triumvirate. Her existence is a gray-scale landscape of chain smoking, scrounging for food and trying to make peace with her grim fate.

Then she gets an offer she can’t refuse: to perform an act of service in exchange for her release from the Aperture. The Triumvirate wants her to locate a girl — an “illegal second child” — who was removed from her family’s home by the Delegation and “placed with upstanding members of the community who couldn’t have a child of their own.”

The task is as complicated as it sounds. Sonya’s detective work earns her a series of furloughs from the Aperture, but traveling farther afield means she’s recognized by strangers who loathe her. She has no idea whom she can trust. With the help of characters who run the gamut from memorable to stock, she begins to wrap her mind around the enormity of the Delegation’s meddling — and her own family’s role in the devastating aftermath…

This is a fun, read-it-in-a-weekend novel, one that pairs well with Halloween candy, spiked cider and a smattering of neighborhood gossip.

Read the whole review at The New York Times here.