Back in the days of Usenet, I started to put together a bibliography of science fiction that were built around baseball. One of the stories on that list is Kim Stanley Robinson’s “Arthur Sternbach Brings the Curveball to Mars.” Originally published in Robinson’s collection The Martians, a companion collection of short fiction to supplement his Mars trilogy that included Red Mars, Green Mars, and Blue Mars. Four months after “Arthur Sternback Brings the Curveball to Mars” was first published in the UK, it made its US debut in the August 1999 issue of Asimov’s Science Fiction, one month before the collection would be released in the U.S. by Bantam Spectra.

Since that time, the story has been reprinted in Robinson’s collections A Short, Sharp Shock, The Best of Kim Stanley Robinson, and Stan’s Kitchen and the anthologies Future Sports, The Hard SF Renaissance, New Skies, and Field of Fantasies (a collection of speculative fiction baseball stories). Demonstrating that interest in baseball is not limited to the US, the story has been translated into French, German, Spanish, and Romanian, in all but the last case as part of the original collection. The Romanian translation appeared in Sci-Fi Magazin.

The story of Arthur Sternbach and his gangly teammate Gregor is set long after the initial colonization of Mars at a time when the colonists have established themselves and consultants came travel to Mars with plans to return home to Earth rather than settle there. Humans have not only been born on the planet, but have also found physical adaptations and formed new societal constructs. Arthur is part of the former group, while Gregor is part of the latter. The two have found themselves playing baseball together in adjacent positions, Gregor at third and Arthur at shortstop, on a team that would need to aspire to not very good.

However, warming up with Gregor and seeing his odd, lanky throws, Arthur realizes that he can teach Gregor to throw a mean curveball, which the Martian leagues don’t use, instead relying on the force of the fastball.  Working with Gregor on the sly, he teaches him to throw a curveball and unveils it at the end of the season as they enter a tournament after ending up last in the standings.

Although Arthur notes that he has no interest in coaching, something he told Gregor and Gregor repeated back to him, Arthur does like to see people improve themselves and he becomes Gregor’s ipso facto coach. When teams of Martians who have only ever had to contend with fastballs face Gregor’s curveball, they are at a severe disadvantage. 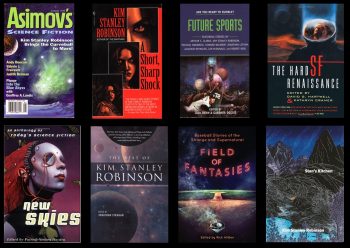 At the same time, Robinson points out the differences playing on Mars would mean, with its lighter gravity and thinner atmosphere. Martian baseball outfields are significantly larger than on earth, requiring a fourth player to achieve coverage, and even then there is significant space between the players. Even more than the talk about the strange social arrangement of Gregor’s family or Arthur’s scientific work on Mars, the discussion of the changes that must be made to the most basic aspects of baseball may be the most science fictional aspects of “Arthur Sternbach Brings the Curveball to Mars” and it demonstrates that Robinson has thought out the changes the game would require, not just transplanted it to the red planet.

In the end, “Arthur Sternbach Brings the Curveball to Mars” is a relatively low stakes story, focusing on a losing baseball team on Mars, however, Robinson makes the reader care about the action because he makes the reader care about Arthur and Gregor. Setting a familiar experience in an unfamiliar location and then finding a way to have it make sense in that new location may seem like background information, but is the heart of the story.

I read this a long time ago, but don’t really remember it.