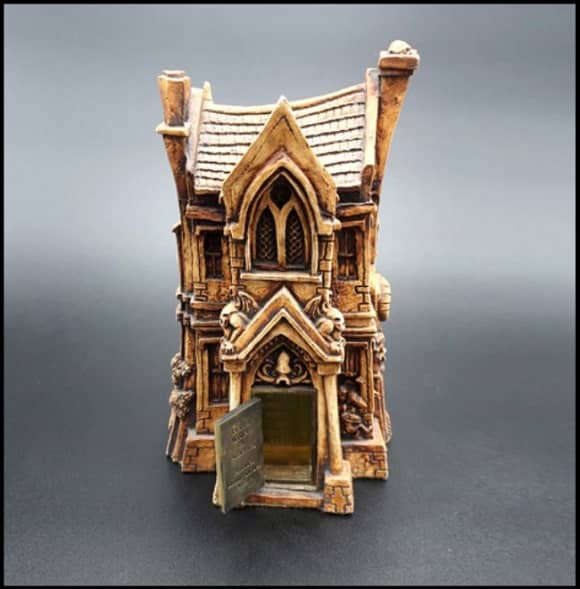 Well, you can’t blame me for trying.

Every year around this time, The Horror Writers Association announces the nominees for the annual Bram Stoker Awards, which recognize superior achievement in horror and dark fiction. Also, every year, I go on an Internet search for one of these amazing awards for sale somewhere.

I mean come on, people have sold their Oscars, which admittedly are not this cool and are probably not this difficult to get. A general search got my heart racing a couple of times, only to discover the link sent me to a page where I could buy a Stoker award-winning book. eBay? Nope. Etsy? Someone has to have duplicated it on Etsy right? No joy, though I did find quite a lot of cool Dracula-related art, such as a bracelet with a quote from the book which reads, “I have crossed oceans of time to find you…”

Still, knowing this particular group of people, the award, a miniature haunted house designed by Harlan Ellison and sculptor Steven Kirk, probably comes with a curse on anyone who tries to create a knock off. That, and as you can see, it’s amazingly intricate and darn right perfect in every way. So, knowing it’s unlikely I’ll ever have one of these beauties on my own shelf, I’m going to do what you can do – load up my 2022 reading list with a whole bunch of selections from this year’s ballot. Remember, these are just the nominees, with the final winners being announced on May 15th at StokerCon in Denver, Colorado.

Superior Achievement in a Novel

Superior Achievement in a First Novel*

*Due to a tie in fifth place, there are six nominees in this category.

Superior Achievement in a Graphic Novel

Superior Achievement in a Fiction Collection

Superior Achievement in a Screenplay

Superior Achievement in a Poetry Collection

Superior Achievement in an Anthology