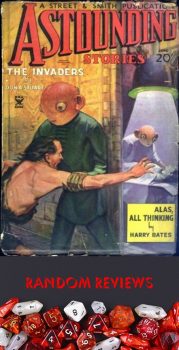 On February 18, 1930, Clyde W. Tombaugh, a 24-year old astronomer, noticed a miniscule dot that flickered when he ran two astronomical slides through a device known as a blink comparator.  Tombaugh had been working at the Lowell Observatory in Flagstaff, Arizona since April of the preceding year trying to find an hypothetical ninth planet that Percival Lowell had predicted would exist.  Tombaugh realized he had made the discovery and reported the news to his superiors. The news of the discovery was announced on March 13 and the new planet would be named Pluto, at the suggestion of an eleven year old girl, Venetia Burney, whose great uncle, Henry Madan, had suggested the names Phobos and Deimos for the two moons of Mars 52 years earlier.

Gallun’s story opens with the aftermath of the crash of a transportation craft on Pluto’s surface. His protagonist, Terry Sommers, is injured and willing to wait for rescue until he remembers that the person in the seat in front of him, Dr. Cairns, had commented that he was transporting a serum to cure Sylfane plague that had struck the city of Pindar. Upon discovering that Cairns, along with most of the other passengers, had been killed in the wreck, Sommers decided it was his duty to try to make it to Pindar with the serum, despite a broken arm.

Before leaving the craft, Sommers realizes that there is another survivor, a Venusian with two broken legs.  Unable to communicate with the Venusian, Sommers eventually decides that he needs to carry the wounded person with him, despite what the difficulties it will add to his already impossible journey.

Sommers’ trek across Pluto reveals that he is completely unprepared to be in the environment in which he finds himself. He knows little about the planet and is really only a visiting actor who never expected to be away from civilization. Along the way, he spots the titular blue haze, which seems to move in ways that indicate that it isn’t an atmospheric phenomenon or completely random.

The story has a very dated feel, clearly written in a different time. This doesn’t mean it isn’t enjoyable, just that the reader will find themselves questioning some of the decisions and set up that Sommers has put into the story. Although there is some characterization, it is kept to the minimum since Sommers barely interacts with anyone, either the Venusian he carries on his back or the nameless doctor he eventually speaks to. However, the main focus of the story is on Sommers’ survival as he moves across Pluto’s alien surface.

Survival stories are common in science fiction, from “Blue Haze on Pluto” to Geoffrey Landis’s Hugo Award winning “A Walk in the Sun” to Andy Weir’s The Martian. Each of these stories tends to build on the survival stories that came before, both in ideas and complexity. Appearing in the mid-1930s, Gallun had examples to work from, but he was still writing during a period in which complexity and any sort of realism had a tendency to take a back seat to new ideas. His Pluto is a planet of new ideas and his alien Venusian, only one of several races in Gallun’s solar system, is briefly sketched without the detail that existed in, for instance, the aliens created by Stanley Weinbaum during the same year. It certainly doesn’t rise to the level of John W. Campbell, Jr.’s later challenge to provide aliens that think as well as, but differently than, a human.

For most of the period that we’ve known of Pluto’s existence, it was little more than an extremely faint point in the sky. On July 14, 2015, the New Horizons spacecraft flew by Pluto, providing us with high resolution imagery of Pluto and its system of natural satellites, and enough data collected to provide teams of scientist lifetimes of work.  As New Horizons sped on to its next target, it turned its cameras to take a parting image of Pluto, resulting in this picture, showing Pluto’s atmosphere, a blue haze on Pluto.

Steven H Silver is an eighteen-time Hugo Award nominee and was the publisher of the Hugo-nominated fanzine Argentus as well as the editor and publisher of ISFiC Press for 8 years. He has also edited books for DAW, NESFA Press, and ZNB. His most recent anthology is Alternate Peace and his novel After Hastings was published in 2020. Steven has chaired the first Midwest Construction, Windycon three times, and the SFWA Nebula Conference 6 times. He was programming chair for Chicon 2000 and Vice Chair of Chicon 7.