Today I want to take a closer look at the one that first caught my eye, The Arbor House Treasury of Great Science Fiction Short Novels, mostly because I find it a really terrific collection of novellas, and a great mix of classics — including Samuel R. Delany’s famous Hugo nominee “The Star Pit,” “The Golden Helix” by Theodore Sturgeon, “The Miracle-Workers” by Jack Vance, and Silverberg’s Nebula winner “Born with the Dead”– and some long-overlooked gems, like Charles V. De Vet and Katherine MacLean 1958 Hugo nominee “Second Game,” Wyman Guin’s “Beyond Bedlam,” and Damon Knight’s “Dio.”

Connoisseurs of 20th Century SF will be intimately familiar with the big names here, including Heinlein (with “By His Bootstraps”), Asimov (with the lesser-known “The Dead Past”) and Clarke (“The Road to the Sea”).

In his Black Gate review two years ago, Rich Horton called Delany’s contribution “The Star Pit” an “Evocation of the Science Fiction Dream of Exploration.”

I remember it as one of the great underappreciated novellas in SF…. it was clearly the best novella of 1967, and I think it’s fair to say that Dozois, Merril, and Lupoff agreed with me…

It’s told by Vyme, a 40ish starship mechanic working in the “Star-Pit,” a huge structure at the edge of the Galaxy, from whence intergalactic ships depart… he has a drinking problem. And he remembers his childhood on out-of-the-way Earth, confined in an apartment, Earth people mostly confined to their “primitive” planet…

It is only some way into the story that we learn one crucial thing. Humans are confined to our Galaxy. Some distance out of the Milky Way, people go insane, then die. Except for one class of people, discovered fortuitously: the golden. These people are psychotic, but in a specific way that makes them able to bear the stress of intergalactic travel…. Vyme has one employee, Sandy, who has also had to leave his family, but who hopes to get back to them… A golden, Androcles, comes to the Star-Pit to work, then kills another golden, which means he claims the dead golden’s ship. Which he gives to Sandy…

This is a story I love, and how does Delany do it? Part of it of course is his image-drenched prose. And behind it is the somewhat implausible but inspiring evocation of the traditional SFnal dream of exploration, enhanced here with the view from the Star-Pit and the description of the alien planets and tech… There is destruction everywhere (and this Galaxy seems perpetually war-torn), but there is also the hope for growth.

Jack Vance’s “The Miracle Workers” is one of his most famous stories, and it has been discussed numerous times. Here’s MPorcius’s thoughtful review on his blog.

“The Miracle Workers” is set on Pangborn, a planet which was colonized by humans, the war-weary crews of space warships, over 1000 years ago. Pangborn’s current human inhabitants have access to very little of their spacefaring ancestors’ hi-tech equipment or technical know-how… When Lord Faide’s army marches off to war on Lord Ballant, behind his mounted knights and foot sore infantry roll the wagons of his cadre of wizards with their cabinets full of voodoo dolls.

“The Miracle Workers” largely concerns the esoteric work of, and rivalries among, Lord Faide’s “jinxmen,” “cabalmen” and “spellbinders,” each of whom has different ambitions, attitudes and ideas; one young apprentice even suspects the scientific ancients’ books and artifacts worth studying….

When Lord Faide finds that the conventional warfare methods of his knights and crossbowmen is of limited use in crushing the native uprising, he turns to his jinxmen, but since the jinxmen’s sorcery relies on “getting into the heads” of their enemies, will it be of any use against the First Folk, whose mental processes, psychology and culture are radically different from that of humans?

This is a fun story, full of violence and understated jokes, but also a story about imperialism/colonialism and about ways of looking at the world, ways of thinking…. Quite good.

Here’s a few more of the magazines in which these stories originally appeared.

Though it’s not nearly as well known as many of the other entries, the overlooked “Beyond Bedlam” by Wyman Guin still has many modern fans. Here’s an excerpt from Perry Whitford’s 4-star Goodreads review.

In the 29th century there is no war, a very happy state of affairs arrived at in a most unusual way. The destructive nature of the unconscious mind was diagnosed as the cause of all conflict, so drugs quashing these negative impulses were standardised.

There was an interesting side-effect however. Everybody became a schizophrenic.

Bill Walden is a hyperalter, Conrad Manz his hypoalter, two distinct personalities who share the same body, each regulated to a five day ‘shift’ before the other takes over. As if this wasn’t enough for a good story, they also share the same wife (without sharing her at all that is!) in Helen Walden / Clara Manz.

As long as the two personalities don’t enter in conflict with each other society is well ordered, work gets done, extramarital sex is encouraged and guilt free. An organisation called Medicorps looks after everybody, ably assisted by the medicops if anyone gets out of hand.

Guin had clearly read Brave New World before, but he creates a completely new world out of the implications of that classic dystopian template. As with Huxley’s story (and Orwell’s 1984) we get to see what happens when someone rebels from the norm as Bill Walden conducts an affair with his wife’s alter-ego. 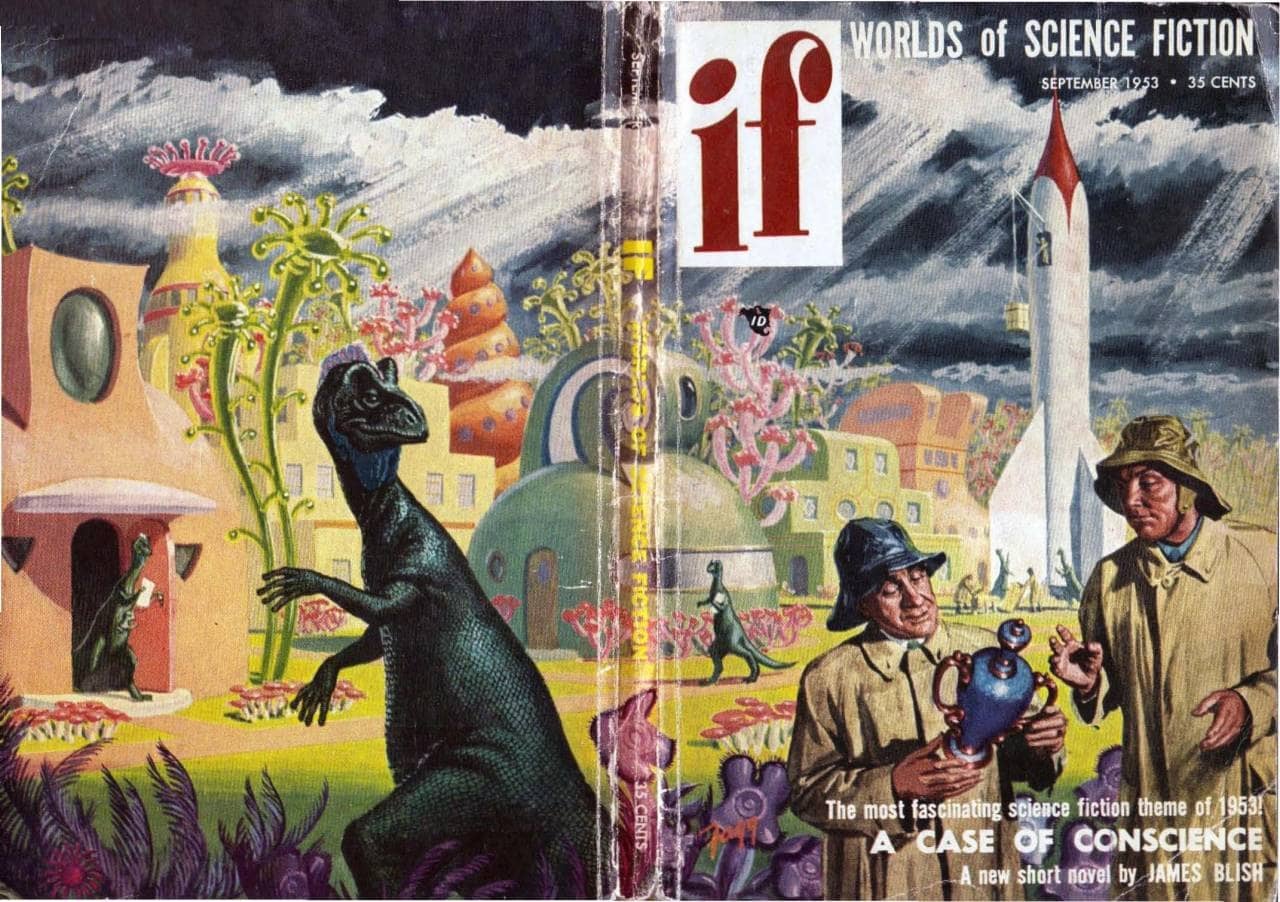 Here’s an excerpt from Mark’s review.

James Blish’s 1958 novel A Case of Conscience, a Hugo Award winner in 1959, is one of the most famous SF novels that deals with religion…

A Case of Conscience… is Blish at his most intellectual and erudite… A reconnaissance team from Earth is on the planet Lithia to evaluate it as a port of call. One of the team is Father Ramon, a Jesuit father, and he discovers that while the local aliens (12-foot-tall lizards) have no apparent religion, their society has an intuitive moral code that exactly matches Christianity’s, and that of no other religion. Disbelieving that such a moral code could have evolved on its own, without divine guidance, he concludes the planet must be a set-up, a trap created by the Satan to cast Earthly faith in doubt, and recommends the planet be sealed off from Earthly use forever.

Ramon’s Lithian friend gives him an unhatched egg — his son.

I’ll take a closer look at some of the other Arbor House Treasuries in upcoming articles. To keep you busy in the meantime, here’s the complete list to track down.

The Arbor House Treasury of Great Science Fiction Short Novels was published by Priam Books’ Arbor House imprint in November 1980. It is 778 pages, priced at $19.95 in hardcover and $9.95 in trade paperback. There is no digital edition. The cover was designed by Antler & Baldwin, Inc.

Many thanks for this feature–I love remembering and discussion vintage SF anthologies!

Glad you enjoyed it Carl! I find myself talking a lot about anthologies these days. There are plenty of exciting new novels on the stands. New anthologies of classic SF… not so much.

I just read Wyman Guin’s “Beyond Bedlam” for the first time and it is truly a great story, capital G Great. Needs more exposure. Original, and wrenching.

You’ve certainly piqued my interest, Rich. I don’t think this story has been reprinted since the Arbor House volume (if you don’t count the 1989 WORLDS IMAGINED, a reprint of this Arbor House title), so it may be a tough find for modern readers.