The first science fiction website I ever launched was the SF Site, way back in 1995. I partnered with Rodger Turner, Neil Walsh, and Wayne MacLaurin to start Canada’s first big SF book blog, and it was a big success, with plenty of early traffic and award nominations. Best of all, we were soon on a first-name basis with the publicity departments at most of the big publishing houses. That’s how I met Andy Heidel at Avon, who helped me understand their big relaunch as they morphed from Avon Nova into Avon Eos in 1998 — including why they jettisoned cover art in favor of purely design-focused covers (“We’re trying to be the next big thing,” Andy explained).

I loved Avon Eos, and their dedication to quality SF and exciting new authors, but I didn’t love those covers. Frankly, I think readers didn’t know what to make of all the abstract shapes and colors, and especially the lack of identifiable heroes or storytelling elements, and they stayed away in droves. Eos eventually reverted to traditional covers, but I don’t think it ever recovered, and it is no longer a functioning imprint.

I think that misfire hurt most of Avon’s authors in the late 90s. Including “Adam Lee,” the pseudonym A. A. Attanasio adopted to publish his critically acclaimed Dominions of Irth trilogy in the US. The series appeared with a series of generic cover designs, and pretty much sank like a stone. “Adam Lee” died a lonely death, and Attanasio returned to publishing under his own name.

Back covers to The Dominions of Irth Trilogy

It’s a pity, as the books themselves are highly regarded. The Orlando Sentinel said they were “In the best tradition of epic fantasy… one of the more inventive imaginary world settings in recent years,” and Kirkus called them “Altogether remarkable.” Here’s just some of the press they received.

Lee constructs an eerie universe of immeasurable beauty and terror peopled by unique interpretations of standard fantasy creatures. Light and Darkness confront one another in a compelling work that spans multiple worlds.

The books were originally published in hardcover under Attanasio’s name in the UK by Hodder & Stoughton, and reprinted in paperback by New English Library with much better covers by Mick Van Houten (see below).

The Dominions of Irth Trilogy, UK editions, published as A. A. Attanasio
(New English Library, 1996-1999). Covers by Mick Van Houten

Here’s the complete details for the Avon Eos paperback editions.

Avon Eos never bothered with digital editions, but Attanasio released them himself in 2013. Copies are $4.95 each, you can check them out here.

See all our recent coverage of the best vintage SF and fantasy here.

I remember those books! And still have a couple of them on my shelf, although I don’t remember if I read the full trilogy. As I recall, they reminded me a bit of Tanith Lee’s Flat Earth books, in that they were lush and mythic.

I was hoping someone would have an opinion. The Tanith Lee comparison is very helpful — and it certainly ups my interest. Thanks!

Attanasio’s Radix blew my mind back in the day. And I never knew he wrote this series.
Guess I need to find them now.

They’re not hard to find, and the paperback editions aren’t expensive. Love to hear your thoughts if you find copies.

These were never on my radar. Have to check them out. As far as covers go, I find the worst to be Baen books but they seem to be effective, but I find them embarrassingly bad.

Baen has followed its own path with covers. They feature strong characters and exciting storytelling elements, and the market has definitely moved away from that in the past quarter century. They’re pretty much alone in their focus on (primarily) male-oriented adventure SF and fantasy, but their core audience loves them for it.

I wasn’t aware Adam Lee was nom-du-plume for A.A. Attanasio. The novels Solis and The Wyvern are two of my favourites. I’ll have to check out this trilogy

I wasn’t aware either, until I started researching this article. It couldn’t have been that big a secret, since he published the books first in the UK under his own name.

https://www.goodreads.com/questions/299967-i-truly-enjoyed-your-work-as-a-teenager
Attanasio several years ago here mentioned three books in the works. I hope he completes them. Along with the rest of his books he self-published a collection called Demons Hide Their Faces (no print version, I think), so maybe he’ll self-publish them too.
Paul Di Filippo recently said Attanasio had “retired”, but the new story in Asimov’s makes me think he hasn’t necessarily given up on writing for publication. He posts poetic pieces of flash fiction on his blog occasionally.

Your recent post on Meredith Ann Pierce: another author whose present and future is a mystery to me too. Where did she go? And where is Richard Calder? Donald Kingsbury? Will they resurface too? I wish I could offer reading experience of them but they’re all authors been sitting in my to-be-read pile for years that I haven’t been fast enough to get around to but still excited about.

You’re not the only one to wonder about Donald Kingsbury! He published his first novel Courtship Rite 40 years ago, in 1982, and it was nominated for the Hugo and won the Compton Crook Award. His fans have been awaiting the promised sequel, The Finger Pointing Solward, for four decades. The artist Donato even released the gorgeous cover art he’d been commissioned to do by the publisher (see below). Kingbury’s last novel, Psychohistorical Crisis, was published over 20 years ago. 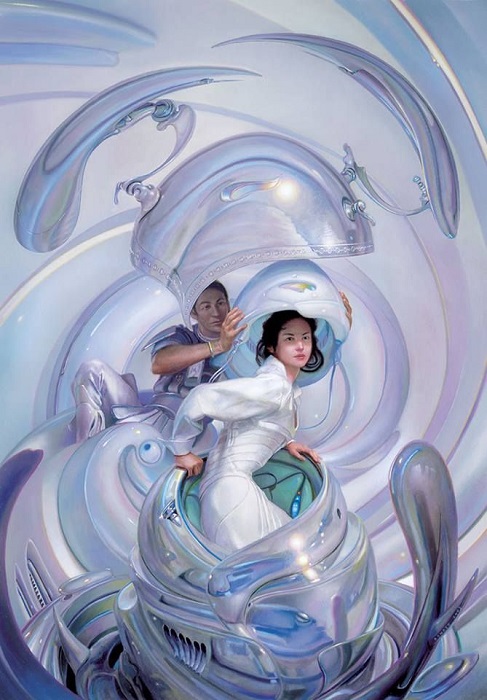 That’s really nice.
Also worth mentioning that Mary Gentle has a new book out this year (first published thing since 2015 and longer since her last book). I had heard Lavie Tidhar say Ekaterina Sedia had given up writing fiction but she had a new story in an anthology recently.

Thanks for the tip on Mary Gentle! You’re quite correct — her new book THE LANDING will be released in June. No cover yet, but as soon as there is we’ll let folks know about it!

Want to also mention that Zachary Jernigan (Jeroun) has a new book out this month after a longish absence
https://www.lethepressbooks.com/store/p599/A_History_of_the_Defeated.html#/

I’m desperate to get a copy of Octoberland– I managed to get the first two on thriftbooks. They’re an incredible bridge between “easy” fantasy and denser stuff, and all the fantasy I’ve read since then has struggled to measure up in terms of non-tolkienian creativity.