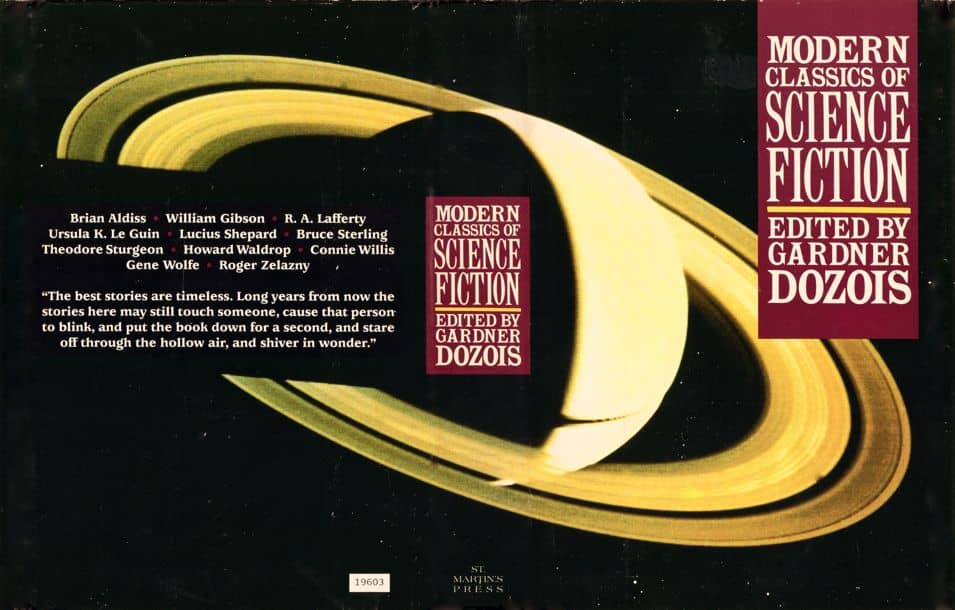 Back in October I wrote about Gardner Dozois’ 1994 anthology Modern Classic Short Novels of Science Fiction, saying it was one of my favorite fall reads. I noted at the time that it was part of a trilogy of books Gardner did for St. Martin’s that also included Modern Classics of Fantasy (1997), which I called “a book that makes you yearn to be stranded on a desert island.” But I’ve never discussed its sister volume, and first in the sequence, Modern Classics of Science Fiction (1992), and so today I thought I’d correct that egregious oversight.

Modern Classics of Science Fiction is a fabulous collection. Like the books that followed, it’s an eclectic and personal volume, filled not with the most famous and acclaimed short science fiction, but instead Gardner’s highly personal selection of some of the best SF of the 20th Century. It includes 26 stories published between 1956 and 1989, by Theodore Sturgeon, Richard McKenna, Jack Vance, Edgar Pangborn, Roger Zelazny, R. A. Lafferty, Samuel R. Delany, Brian W. Aldiss, Gene Wolfe, James Tiptree, Jr., Ursula K. Le Guin, Howard Waldrop, Lucius Shepard, Michael Swanwick, and many more. 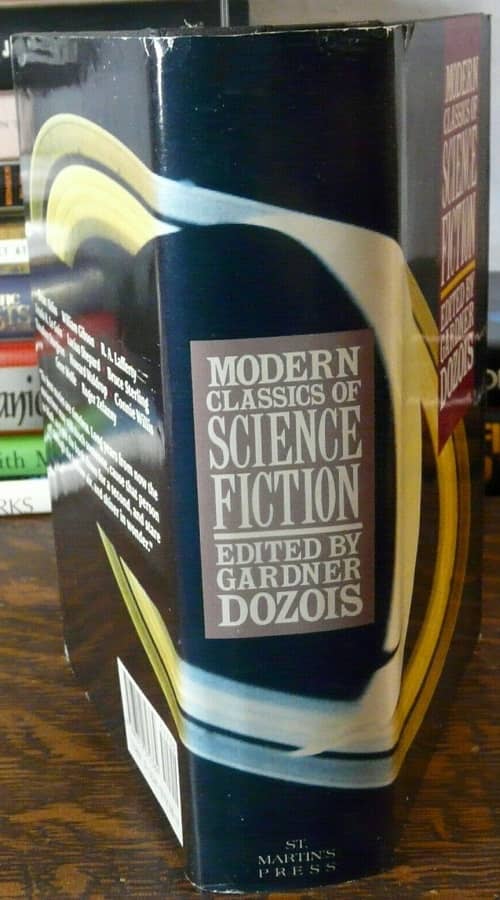 I find it refreshing that Dozois didn’t feel compelled to include many of SF’s most famous authors, or the most famous stories from his contributors, and that gives him room to pack in a wide range of neglected gems. So no Heinlein, no Asimov, no Poul Anderson, Arthur C. Clarke, or Harlan Ellison. No Fred Pohl or Philip K. Dick, and no Ray Bradbury or Anne McCaffrey. No Larry Niven, J.G. Ballard, or Alfred Bester.

What have we got instead? A great many stories most of you have never heard of.

Inside flap for Modern Classics of Science Fiction

To go along with the personal collections, Gardner included a lengthy, chatty, and very personal introduction for each story. Here’s the first paragraph of his three-page intro to Delany’s “Driftglass.”

I picked up Samuel R. Delany’s first published novel, The Jewels of Aptor, in 1962, as soon as it hit the newsstands (I even remember which newsstand, one on the platform in a subway station under what had once been Scolley Square, in Boston; memory is a funny thing), and, although it was packaged no differently that dozens of other Ace Doubles I’d read with only low-key interest in other years — same garish and ugly pulp cover, same overheated pulp blurbs — I felt a thrill of excitement with the very fist page, an almost physical tingle, as though a small electric current was passing through the paper, and I knew at once that I was in contact with a very uncommon talent indeed.

Dozois’ intros had their own sorcery, I think. He certainly sharpened your interest in the story you were about to read, of course. But the way he described science fiction, capable of surprising you with transporting wonders found sandwiched between tattered magazines at a subway newsstand, made it sound almost infinitely rich. A treasure hidden between the cracks of the mundane world, visible only to those who know where to look, like a secret station to Hogwarts School of Witchcraft and Wizardry at Platform 9 ¾. Admit it, now you want to read The Jewels of Aptor. 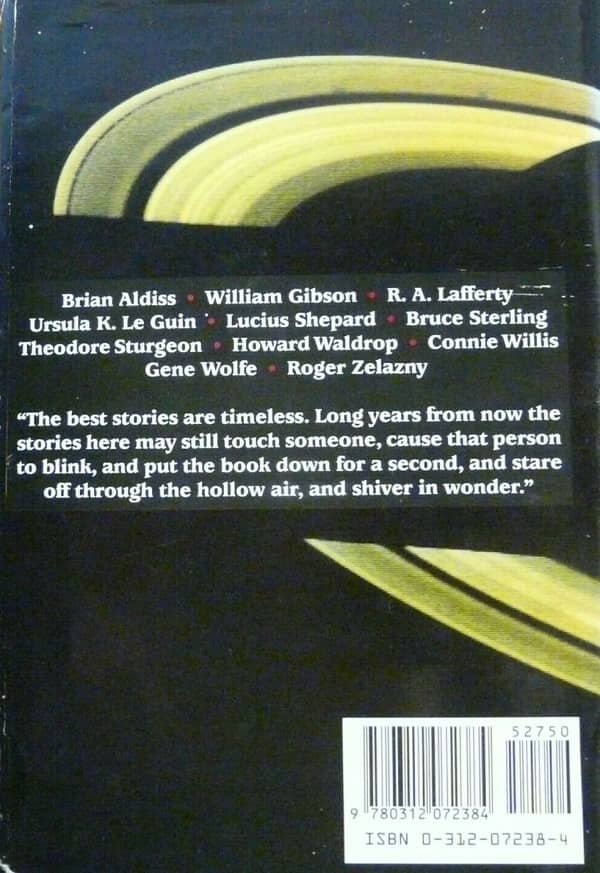 Back cover of Modern Classics of Science Fiction 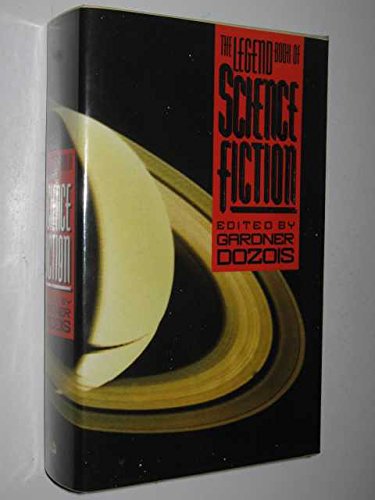 Modern Classics of Fantasy is part of a series of anthologies edited by Gardner for St. Martin’s Press that includes:

Modern Classics of Science Fiction was ordinally published in the UK in 1991 as The Legend Book of Science Fiction, and reprinted the following year by St. Martin’s Press under the revised title. It has not been reprinted since, and there is no digital edition. The St. Martin’s edition is 672 pages, priced at $27.50 in hardcover and $15.95 in trade paperback. The cover is a NASA image of Saturn.

I am impressed at how “modern” the selections are, with 6 of them being 5 years or less from first publication. And quite eclectic in his definition of science fiction, as several of them are only lightly speculative (like Le Guin’s Orsinian tale, “The Barrow”, or Sterling’s alt-history of rock criticism, “Dori Bangs”). I can recall reading most of them, which is some sign of their quality. But I am not sure if I would have had Mr. Dozois’s insight to choose them for a ‘best of’ anthology. That is one reason that he got all those Hugos for Best Editor.

Even Howard Waldrop’s Hugo and Nebula-nominated “The Ugly Chickens” is arguably not SF — though it is a fantastic story. “Dori Bangs” I think is similar. They were written by SF writers and published in SF magazines, and they both rely on a fantastic premise, but they’re not the kind of straight-arrow science fiction I was raised on. But I love them all the more for that!

Same for the LeGuin – The Barrow isn’t really sf, if I remember rightly.

Gardner did his best to include only SF in an SF anthology, but if a story was of exceptional quality, he was prepared to bend the rules a little. For example, Terry Bisson’s famous “Bears Discover Fire” was in The Year’s Best Science Fiction, but it’s also in Modern Classics of Fantasy!

Yeah, but I kina think that story transcends genres. It’s about Bears evolving, right? So it’s obvious SF. But bears! With fire! That’s fantasy for sure.