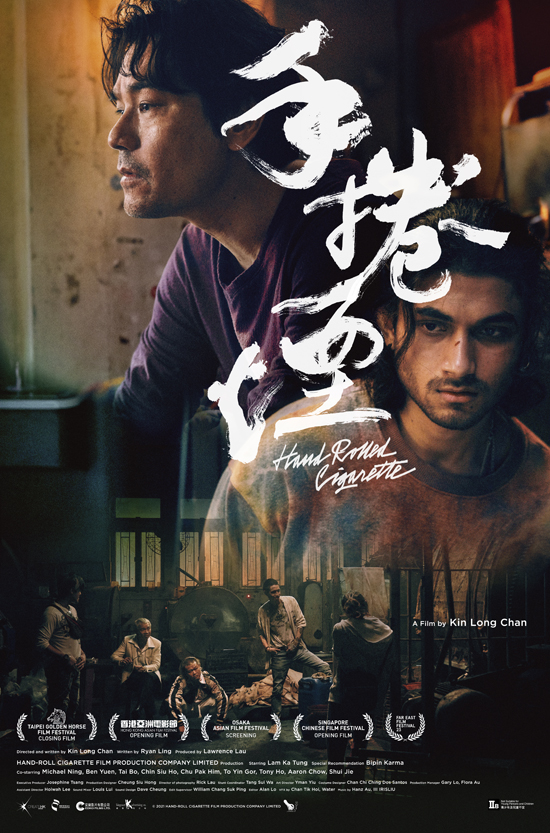 Hand Rolled Cigarette (手捲煙), from Hong Kong, had its Canadian premiere at the 2021 Fantasia Film Festival. It’s the first film from director Kin Long Chan, who co-wrote the movie with Ryan Ling, and stars Ka Tung Lam (also known as Gordon Lam, a veteran actor and the screenwriter of Time, also at Fantasia 2021) as Kwan, a former member of the British armed forces in Hong Kong. After the British turn Hong Kong over to China, Kwan retires and falls in with organised crime. In 2019, he’s scheming with a turtle smuggler named Pickle (Ying-gor To) to convince his boss Tai (Ben Yuen) to take a deal for black-market turtles — and then a South Asian immigrant thief named Mani (Bipin Karma), who ripped off Tai, stumbles into Kwan’s home desperate for sanctuary. Mani pays well to get a temporary hiding place from Tai’s goons in Kwan’s home. But Tai’s after Mani’s accomplice, his cousin Kapil (Bitto Singh Hartihan), and then there are those turtles to worry about. Violence escalates throughout the movie, and it’s clear that at any moment the bloodthirsty Tai could turn on Kwan.

A story of crime and brutality, the drama and conflict of Hand Rolled Cigarette emerge not just from character but from the society the characters struggle with and against. Most obviously, Mani faces blunt hostility because of his race. The movie’s sharp enough to show some of that coming from Kwan, our protagonist and the closest thing to a sympathetic figure in the film. Kwan’s past in the military, meanwhile, comes into play in a number of ways — to start with, as an instance of a broken promise, as he and his men were not granted citizenship by the country they served. 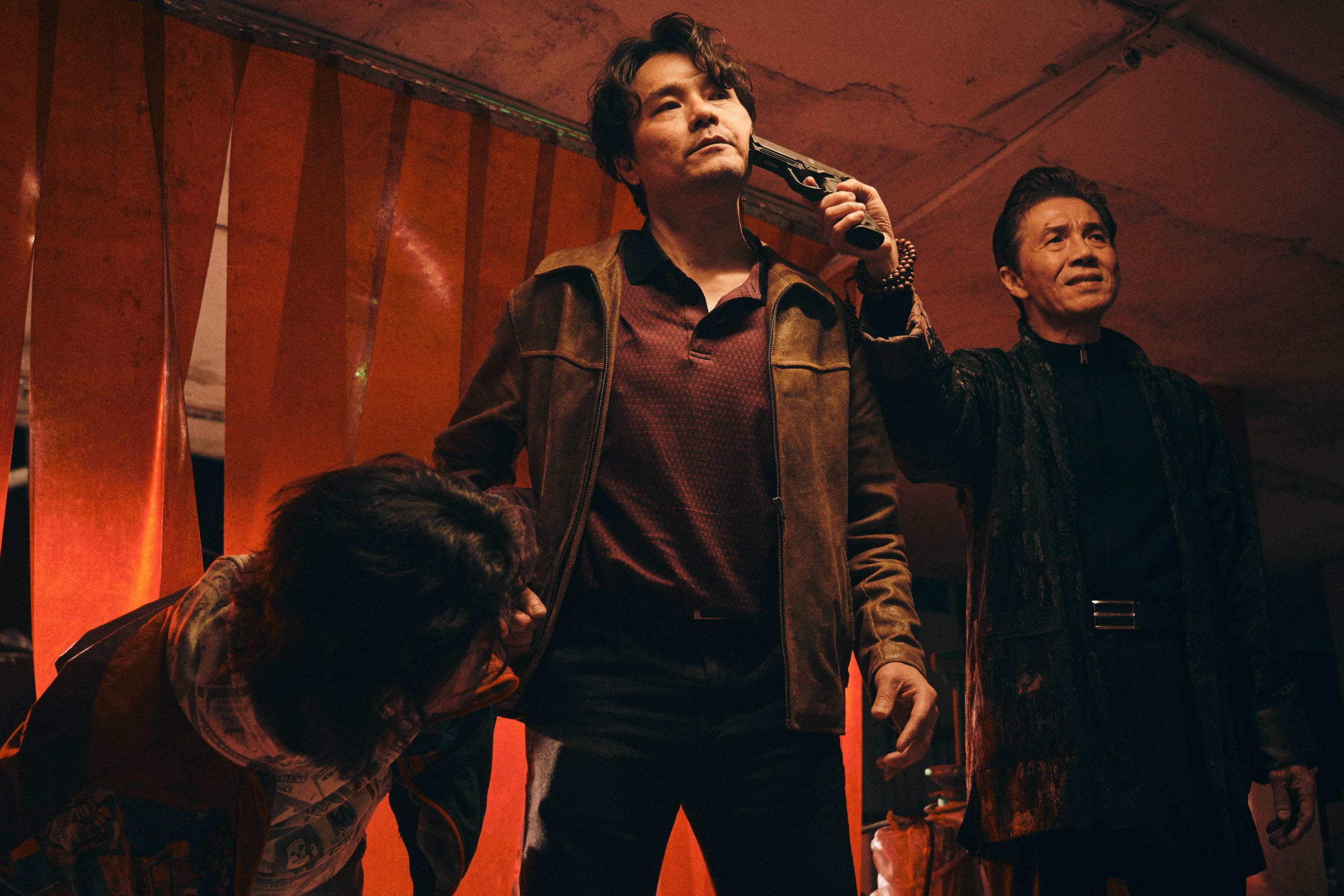 There’s also a recurrent subtext to do with the global financial situation. News reports in the background give stock reports, references are made to worldwide crashes — the international web of big business becomes a part of the background of the film. We eventually find out it’s also relevant to Kwan’s past, and to his embittered relationship with the men of his unit. A couple of subtexts present themselves: on the one hand, the camaraderie of Kwan’s unit was broken by the impersonal machinations of finance, so there’s a sense of capitalism as corrosive to basic human values and relationships. And then also it’s another example of the way people in this movie struggle against and are crushed by the larger dynamics of society: Mani as an immigrant, most obviously, but Pickle and Kwan trying to scam the triads also apply — you need to get money in a society where money by design is difficult to come by, and inequity is rampant. Hence crime.

Which is to say that the crime elements of this film have an eye on the bigger picture, but in a way that fits with the tradition of noir. I think a lot of noir and later crime movies consciously or unconsciously point out the limitations of their society, and how that society produces criminals and tempts people to viciousness. It may be done cynically, arguing that the world’s a corrupt place so everyone in it must be corrupt by extension. But even to make that argument means talking about the structure of the world as it is. I think there’s something of that here. Kwan hand rolls his cigarettes, maybe recalling the chain smokers of an earlier era, but also creating a symbol of masculinity and male bonding — he doesn’t hand out his cigarettes to anyone. It’s that kind of connection, that man-to-man link, that the world and its big politics undermine. 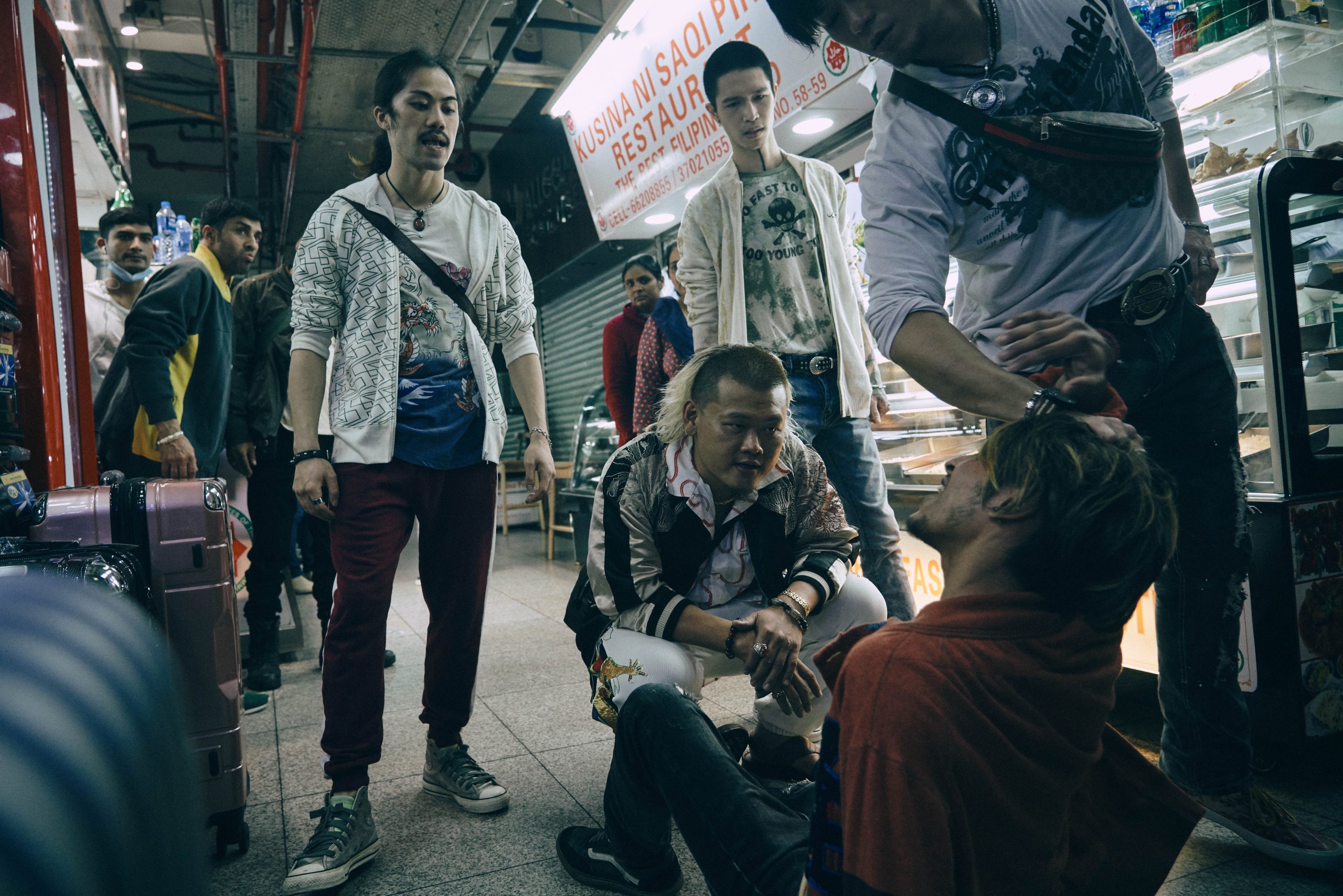 You notice that the scale of the crimes here feels small. Kwan and Mani and Pickle and maybe even Tai are chasing life-changing amounts of money, but it doesn’t take all that much money to change a life. This is not a movie about a theft of millions of dollars. It’s not about transnational criminal conglomerates. It’s about low-level scammers, and a triad gang, and street-level brutality. Violence and the threat of death are always present, but people are tortured and killed for low stakes — the reports in the background about the stock market make it clear where the real money is, and perhaps also the real criminals.

To my mind there’s a feel here recalling old Hong Kong action movies, and their themes of honour and crime and masculinity and violence. But then there’s also much less actual on-camera gunplay. There are set-pieces, but they’re mostly not exciting fight scenes. They’re chases, and beatings, and executions like something out of a Scorsese mob picture. 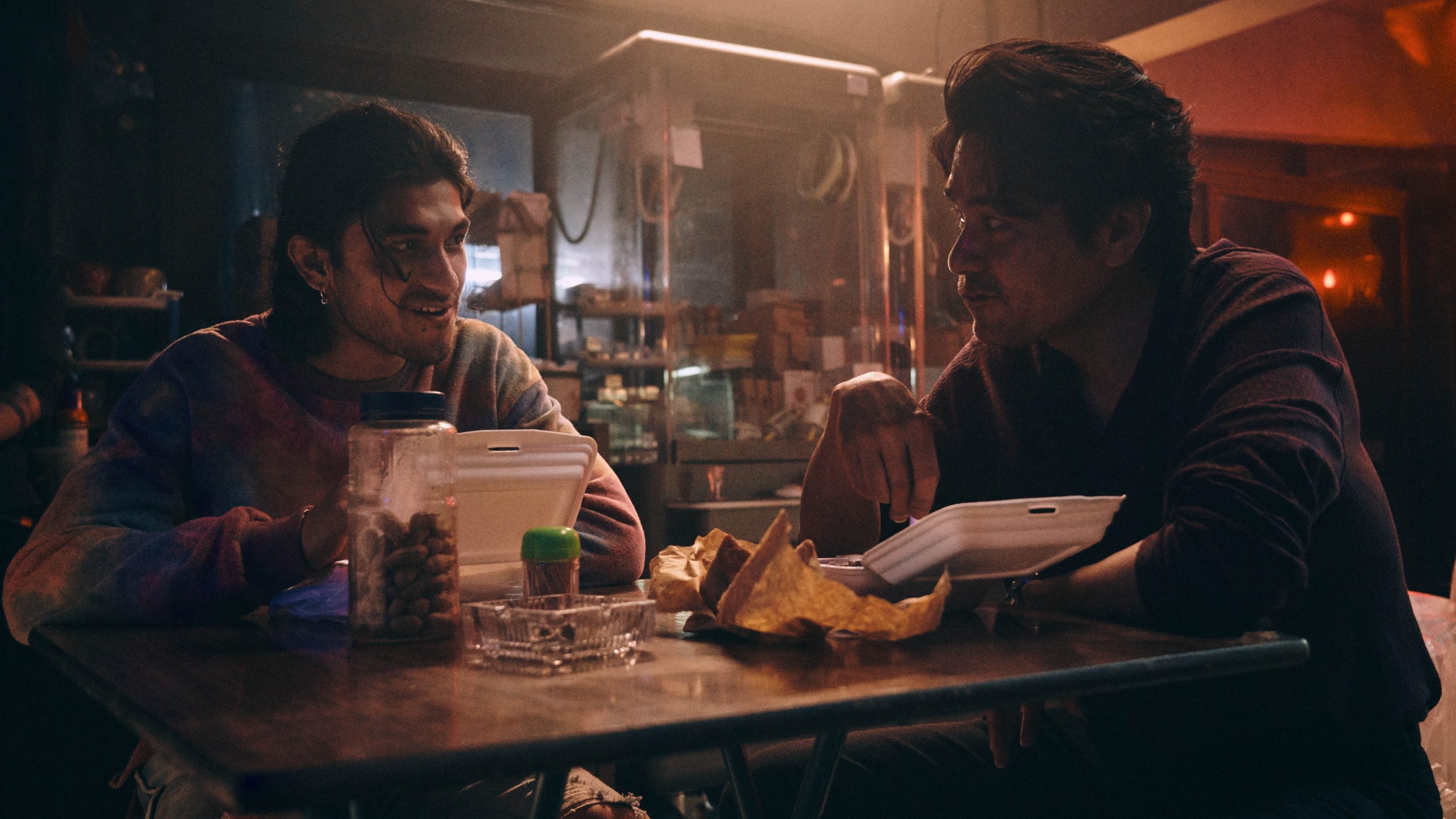 And then the climax comes along, and there’s a shoot-out. And it feels like something out of a different movie. There’s a new set of camera tricks, movements quite unlike anything earlier on; it’s effective storytelling, and engaging to watch, but again it’s like something out of another movie. The groundwork hasn’t been laid. On its own terms it’s fine, but it’s a different rhythm and approach than anything up to that point.

Still, if a movie’s only problem is excess of style, there’s likely something good going on. And in fact for the most part the movie tells a story with a large cast of characters in complex relationships clearly and efficiently. There’s a harshness to the lighting, contrast high and moody shadows everywhere. The urban environment’s brought across well, markets and back rooms and alleys that swallow up the characters like a vast maze. It’s a labyrinth without an exit, only a lot of different dangers. 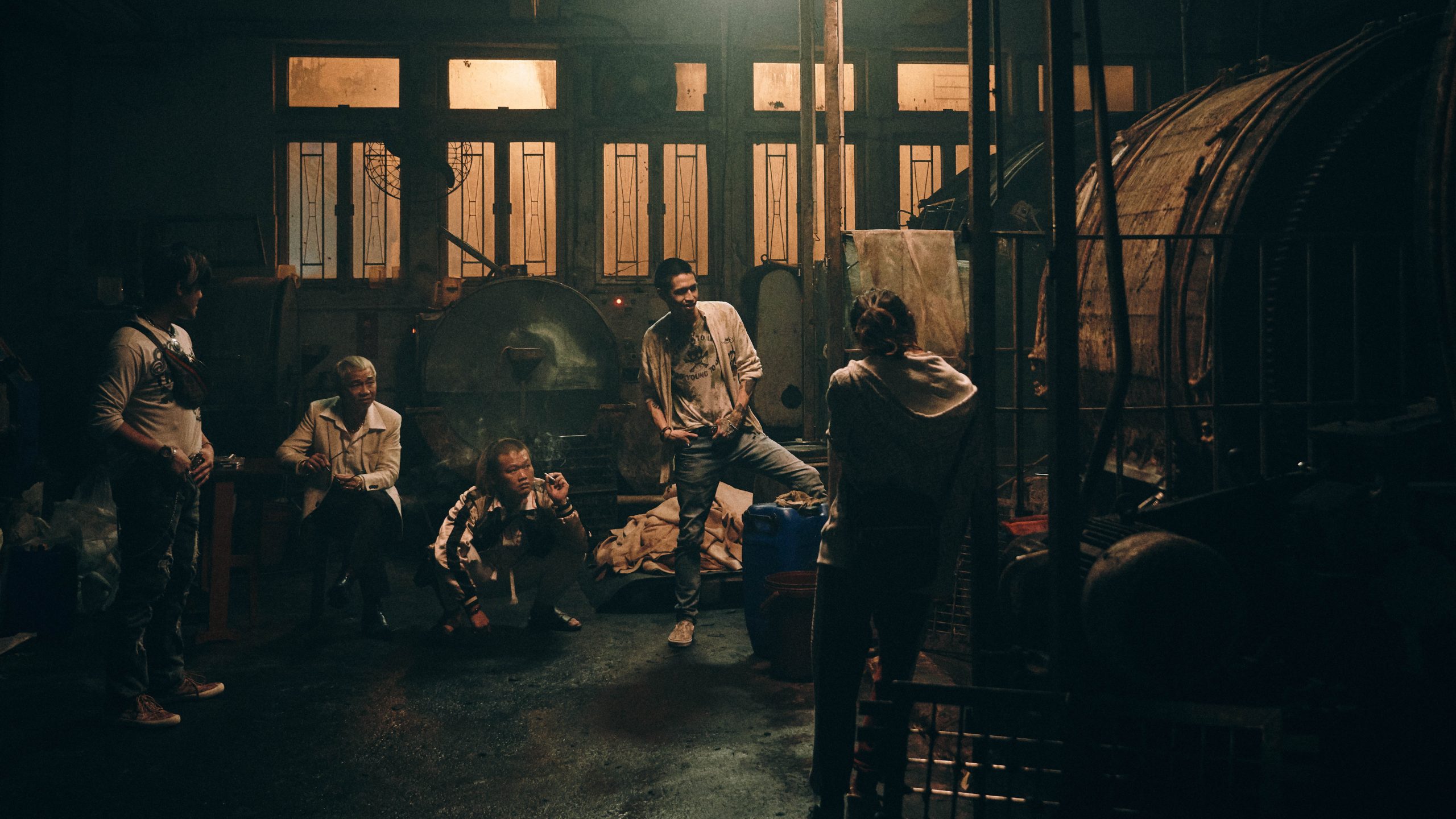 Hand Rolled Cigarette does a good job of telling a low-level crime story that implicitly indicts society at large. There’s a grim social conscience here, in which nobody’s a saint and everybody’s out for themselves. “Shitty luck doesn’t see race,” somebody claims at one point, but the movie’s smart enough to understand that race, and a lot of other things, affects how shitty luck plays out. Society’s not separate from character or story, but is the setting that shapes the story. This is a thoughtful, hard-nosed tale about men and money and violence, about bonds and betrayal. It’s a fine neo-noir that does what it wants, even if at the end it tries to expand beyond the form it finds for itself.