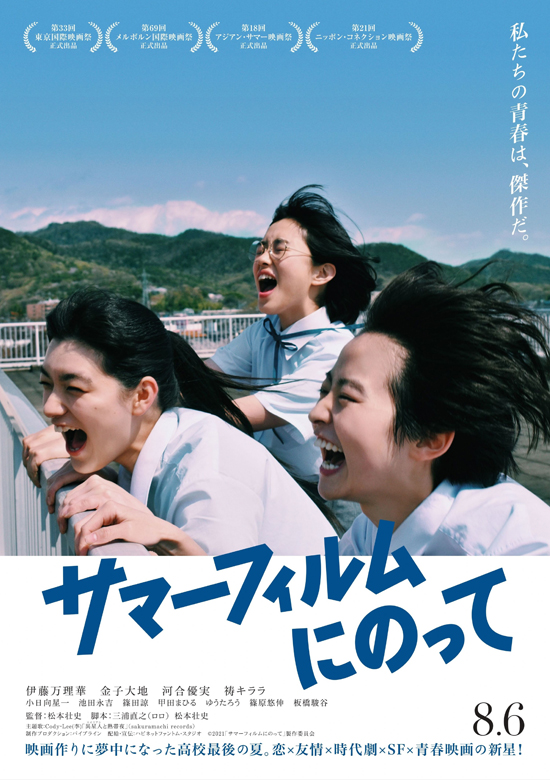 “School Radio to Major Tom” (“こちら放送室よりトム少佐へ”, “Kochira Housoushitsu yori Tom Shosa e”) is a bittersweet story that becomes a tearjerker by the end. A 10-minute short written and directed by Chisaka Takuya and set in 1989, it follows Eisuke (Tokuma Kudo), a teen who broadcasts and records his own science-fictional radio drama about a certain Major Tom every morning at his school; one day he comes in to find a girl (Chika Arakawa) who attends night classes has added a part of her own to his story. He responds, incorporating what she’s done, and then she responds to that, and the story takes flight without them ever meeting except by voice. Graduation looms, when Eisuke assumes they’ll finally see one another, but viewers who remember the song that gives the film its title may well expect things to go differently. The movie captures the atmosphere and technology of its era very well (shot on actual analog 16mm film), but more importantly it captures character. And it finds effective parallels between the story the two characters tell and their own lives. It’s a tremendously effective piece of work.

With it was bundled It’s A Summer Film! (サマーフィルムにのって), the debut directorial effort from Sôshi Masumoto, who also wrote the script with Naoyuki Miura. It’s a movie about a film club at a Japanese high school, which is divided in two. Which is to say, club president Karin (Coda Mahiru) is revered by almost all the club as a genius auteur, who loves the romance genre — but the outsider named Barefoot (Marika Itô, who had a supporting role as a punky outsider in the first Kakegurui movie) loves her samurai cinema, and has a script ready to go to make her own samurai film even though the rest of the club’s ready to pitch in to make Karin’s newest crowd-pleasing epic. This is the story of Barefoot’s journey to realising her dream, along with her friends and fellow outsiders, science-fiction fan Kickboard (Yumi Kawai) and aspiring swordswoman Blue Hawaii (Kirara Inori).

Before Barefoot can make her film, she needs a star, somebody just right for the role. She’s mentally rejected everyone she knows — but then a new boy named Rintaro (Daichi Kaneko) turns up, and it clicks for her. She pursues him for the role (literally, in an engaging chase scene), and then gathers a supporting cast and crew to help her make the film she dreams of. There are complications: Rintaro has a secret. And there’s the one-sided rivalry between Barefoot and Karin — Barefoot’s aggrieved by Karin’s success, while Karin hardly notices the existence of Barefoot. Will Barefoot’s movie come together in the end?

The answer to that question comes surprisingly early. But the answer raises other questions. It’s a structural choice in keeping for this sunny, charming, and whip-smart film. This is a movie that does a lot of things you don’t expect, and some things you do as a way to get at deeper ideas.

To start with, this is a very thoughtful movie about genre. I am not particularly knowledgeable about samurai film, but Barefoot’s obsession with the genre is recognisable as the enthusiasm of any fan for their preferred genre (though I have a quibble about some the things she says at the climax). The movie balances its references to both samurai film and romances well, and adds a third genre that becomes a major element; I know some viewers were surprised by this genre’s appearance, which is why I’m not being specific about it, but it’s set up quite well by some of the references we see and the mystery around Rintaro.

Mainly, though, the film’s clever and wise about friendship, community, and rivalry. The relationship of the leads is handled perfectly, and the general friendliness and reasonableness of the characters is lovely to see. The conflict between Barefoot and Karin is handled gently; they’re not out to thwart each other, but Barefoot’s anxious to establish herself and prove the value of her work and her obsessions. Meanwhile, the friendship between Barefoot, Kickboard, and Blue Hawaii is strikingly real because you see a trio of outsiders pulled along by the most obsessive among the group — Kickboard and Blue Hawaii have interests that overlap with Barefoot’s samurai obsession, but they mainly tag along on her filmic quest because they like her and want to support her, rather than because they’re great fans of samurai film themselves.

It all plays out with a delightful sense of optimism and positivity that’s thoroughly earned. It’s not that there aren’t obstacles and even personal conflicts, but absolutely nobody in this movie is mean-spirited for no reason. Cinema is a collaborative form, and this film is about the process of collaboration, and how people come together to get a thing done. This may sound simple, but it’s hard to dramatise; It’s A Summer Film! does so with apparent effortlessness.

Much of that, I think, comes from the cast. There’s a statement I’ve heard directors make at Fantasia and elsewhere that 90 percent of directing is casting — get the right actors for the roles, as Barefoot pursues Rintaro, and the movie will work. This film brings that home. The actors are exceptional, inhabiting the characters perfectly. Itô’s Barefoot, who risks being the least sympathetic character because of her obsessiveness, is instead determined but sympathetic. You believe in her vision without seeing her script, because she believes in it and the other characters believe in it and they’re collectively a group of perceptive and clever kids.

Not excessively clever, but the kind of clever you get in a generally smart story. There are a lot of grace notes here, a lot of good sharp lines but also lots of self-aware humour. (I liked the fact that in a movie where adults play teenagers, one of the teens is nicknamed ‘Daddy Boy’ precisely because he looks like a man in his thirties — which the actor really is.) There are also a lot of moments that stick with you, from Barefoot’s hectic chase of Rintaro, to her moments talking film with Kickboard and Blue Hawaii, to the first day of shooting on Barefoot’s film, to the moment of revelation of Rintaro’s secret.

There’s something appropriate about that, as cinema is a form that has the ability to create those moments of special and memorable power which almost float outside of the logic of the story. And this is a film about cinema, and about the power it has. It’s a story about story, about art, and the effect art has across time. It’s about the way art inspires art, and about the way film expresses story; about the way people can express themselves in art and story and film.

My only real quibbles with the film are two moments at the climax. There comes a point at the very end where Barefoot tells her story not through a projected image but by getting up on a stage before an audience with another character and acting out the tale; there is a word for this artform, and it is not cinema. In a movie that’s otherwise about film, I couldn’t understand why it suddenly became about the theatre. And before that, Barefoot gives an explanation of what draws her to samurai films which I thought undermined her obsession with the genre — without giving too much away, it sounds as though what she likes about the genre is the fact that it’s symbolically another genre, which I am not immediately convinced is why people like genres. But then I’m also not convinced that the things that draw someone to a given kind of fiction can be easily summed up.

As I say, these are quibbles. It’s A Summer Film! is lovely and intelligent work about engaging characters. It’s an excellent film about film that also tells a warm and funny story with some bittersweet tones. It’s a movie that knows what it’s doing, and knows exactly where and how to end.