Through the Reality Warp (Ballantine Books, 1976). Cover by Boris Vallejo

Donald J. Pfeil had a brief and mostly undistinguished literary career. He’s chiefly remembered today as the editor of the well-regarded SF magazine Vertex, which ran for three years in the early 70s. He wrote some short fiction (all published in Vertex), and four novels, including a Planet of the Apes tie-in with the undisputed greatest title of the 1970s, Escape From Terror Lagoon. (If I could dream up titles like that, the entirety of Western Civilization would be helpless before me.)

His best-remembered book is Through the Reality Warp, a dopey science fiction adventure featuring a ballsy soldier named ‘Billiard’ (get it?) who’s shot into an alternate dimension to smash stuff and seduce space babes. It has a dismal 2.67 rating at Goodreads (and some heartily entertaining 1-star reviews), but that’s beside the point.

The point — and the only reason this book is remembered at all after 45 long years — is that eye-popping Boris Vellejo cover, featuring a gorgeous alien landscape, a virile space hero. a slavering alien fiend, and…. oh, wow. A cringeworthy amount of exposed space butt, courtesy of an all-male art department. 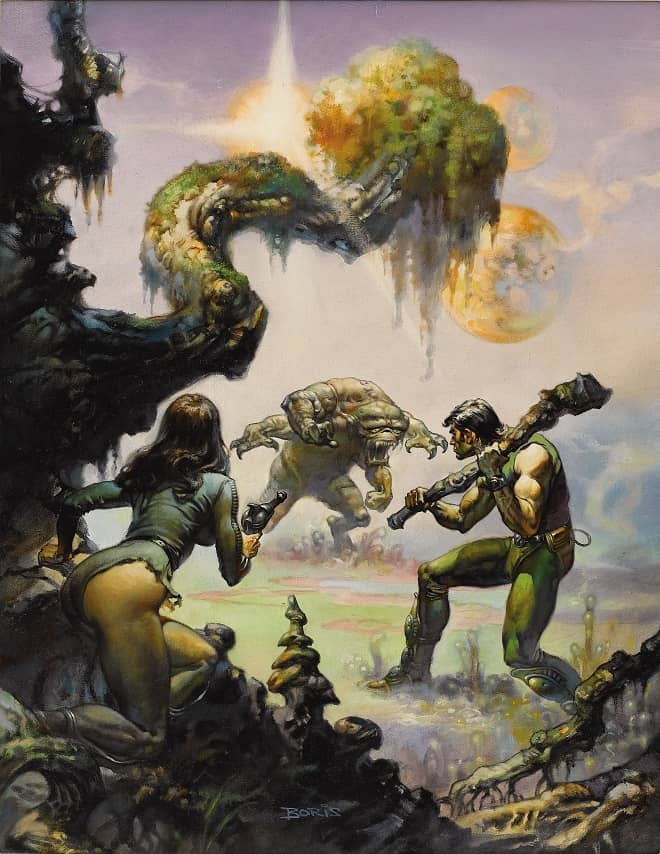 Now, I’m a fan of Boris Vallejo’s cover art. His colorful and uninhibited style rejuvenated the industry in the 70s and 80s, and helped sell hundreds of thousands of paperbacks. His covers fired the imaginations of an entire generation of fantasy and science fiction readers, and his love of — and consummate skill at rendering — both the male and female form made him instantly recognizable.

But that still doesn’t excuse this cover. The art directors at Ballantine should have known better. I’m 57 years old, and I still feel I should put it in a brown paper bag before I smuggle it into the house.

Some of Boris Vellejo’s most recognizable covers: The High Couch Of Silistra (1977), Mirage (1982), and
Red Sonja #6: Star of Doom (1983). I love these covers, and that’s directly related to the lack of gratuitous space butt.

Admittedly, I do find myself curious about this book, and you may be as well.. Here’s one of the 1-star reviews I mentioned that should help that feeling go away.

The first 15 pages are a pointless rescue mission with our crusty mercenary hero in what would have made a better book, but instead the plot jettisons itself into a discussion of multiple universes, terrible science, and how in some other universe… they found our universe and are drilling black holes in it to suck out the sweet, sweet energy. There is so much wrong with that, but lets move on. The power plan is to send our crusty mercenary through a black hole into the other universe….

Conviently (sic), the other side is populated by humans (!) … Hell the other universe has the same type of ships, “kill-torps”, guns, female characters as the one hes left. Its pathetic.

So whats our heros plan to save our football sized universe? Well, to answer a newspaper ad for a job as a commander of some revolutionary forces! Brilliant. Anyway, after that it degrades into 4th rate unbelievable military sci-fi, and muddles on for 150 pages. Woot.

That one’s by Scott Nieradka. Read the whole thing here.

I wish I could say Through the Reality Warp was an anomaly in 1976, but that would be white-washing an entire industry. Ballantine Books was a fine publisher, but they produced their fare share of men’s adventure SF targeted at a young male audience, and no doubt they did fairly well with it.

While the ass-cheek exposure on the cover is unusual (not to mention anatomically suspect), and pushed the bounds of acceptability even for 1976, sad to say it wasn’t that far outside the norm for this kind of book.

The inside front cover of the paperback gives you a pretty good idea of the literary treasures within. 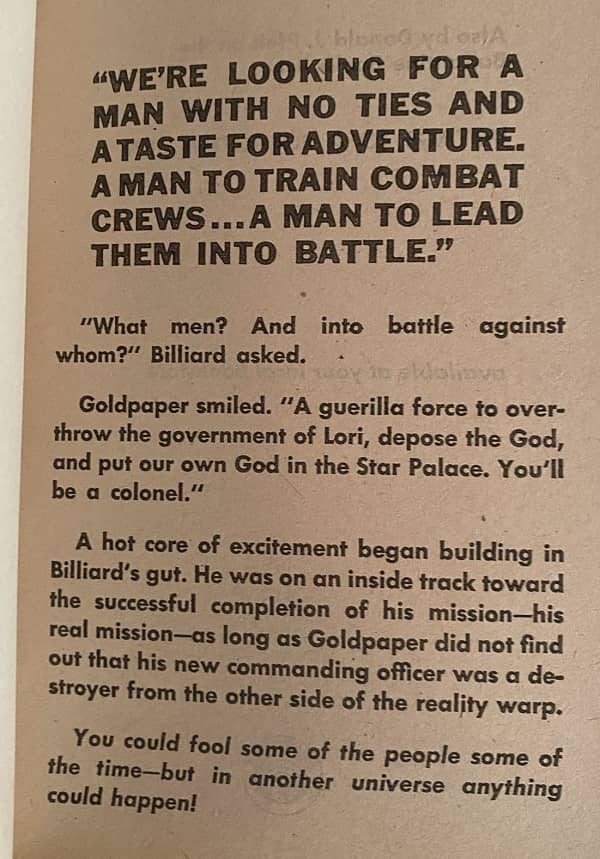 Inside cover of Through the Reality Warp, and the only known instance of the phrase “His new
commanding officer was a destroyer from the other side of the reality warp” in the English language.

Donalf Pfeil died in 1989. In addition to the timeless classic Escape From Terror Lagoon (1976, written under the name William Arrow), he published two other novels, Voyage to a Forgotten Sun (1977) and Look Back to Earth (1977).

The most interesting thing about Look Back to Earth is that it appears to have used recycled Dune cover art by Bruce Pennington, who did the covers to the British editions of Frank Herbert’s classic series. Have a look below and tell me I’m wrong.

Through the Reality Warp was published by Ballantine Books in February 1976. It is 164 pages, priced at $1.50 in paperback. The cover is by Boris Vallejo. It has never been reprinted, and there is no digital edition. Sorry.

The only Donald Pfeil novel I read was VOYAGE TO A FORGOTTEN SUN, his first novel, which got a vaguely positive review from someone (Sturgeon? Robinson?) so I bought it. I remember it as mildly entertaining — better than THROUGH THE REALITY WARP, anyway, which I never bought for many reasons, all of them good!

I know I’ve told my Vertex story before — in these pages, even — how I subscribed to it expecting the nice looking large sized magazine and a I got a newspaper instead. Which was their last issue …

I forgot your Vertex story! I think you can be forgiven for retelling a story after more than a decade (it originally appeared in BG 10 in 2007, and was reprinted here a few years ago).

Vertex must be the first SF publication to transition from glossy magazine format to newsprint tabloid and then BACK again….

Well John, your off-hand comment “if I could think up titles like that . . .” got me thinking . . . Herewith ten titles (with accompanying one-sentence plot summations) of the worst novels (mercifully) never written.
……………….

Through the Hooking Glass

A senses-constricting misadventure into a dull bourgeoisie world of staid geometers.

A forgotten tale from the planet of the apes.

A sci-fi extravaganza set on a forest planet of warring neo-medieval factions who battle each other, sentient ferns and giant maggots over control of the world’s most precious resource: a crystalline white substance that makes all food, incredibly, more tasty.

Have Solar Cummerbund, Will Galivant

A bus-boy’s intergalactic foray into the lowest rung of the restaurant industry’s service arm.

A Weirdo in a Weird Realm

Effeminate, sharp-dressed, logorrheic big cats kvetch and moan throughout the pages of this gay comedy of manners and to-die-for golden manes.

A dystopian novel of book heating.

Through the Hooking Glass
A 70s era memoir of sexcapades, monetized genital-to-genital contact and hookah shops.

Square Planet
A senses-constricting misadventure into a dull bourgeois world of staid geometers.