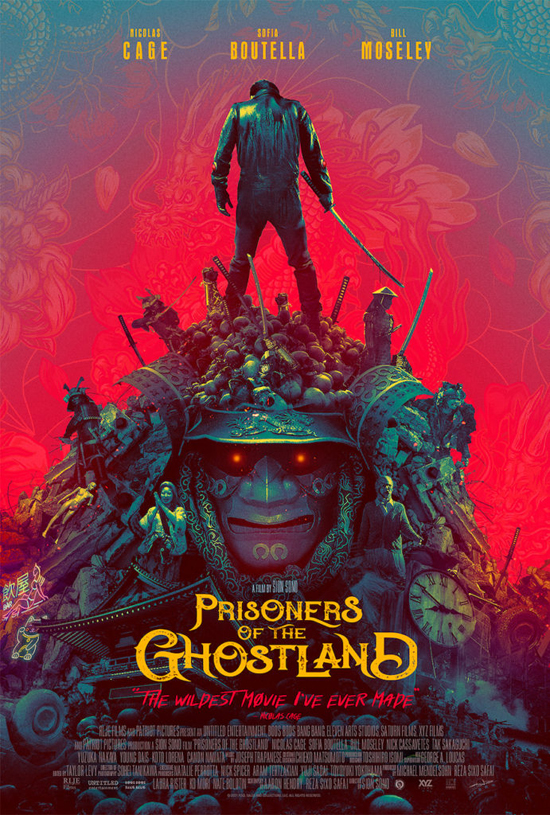 Prisoners of the Ghostland was one of the most anticipated films at Fantasia 2021. It unites madcap director Sion Sono (last seen at Fantasia with the feature version of Tokyo Vampire Hotel) with a certain mister Nicolas Cage. You might reasonably expect a full-throttle over-the-top ride. And that doesn’t quite happen.

Written by Aaron Hendry and Reza Sixo Safai, the movie takes place in a part of the world scarred by a spill of nuclear waste. A village called Samurai Town is ruled by a rapacious Governor (Bill Moseley) who, as the film begins, hauls a criminal named Hero (Cage) out of prison to look for his granddaughter Bernice (Sofia Boutella), who herself has fled the city for the dangers of the uncontrolled territory called the Ghostlands. Hero’s given a deadline and a booby-trapped suit that’ll blow up parts of his anatomy he’d rather keep if he fails to return on time, or if he thinks impure thoughts around the Governor’s granddaughter.

He drives off into the Ghostlands on his quest, and you might expect a long odyssey to follow. Instead he finds Bernice quickly, but also gets taken prisoner by a group who dwell in the Ghostlands. Revelations and subplots follow; there are glimpses of a parallel track of story back in Samurai Town, following the governor’s bodyguard Yasujiro (Tak Sakaguchi, Musashi in last year’s Crazy Samurai Musashi); there are flashbacks to establish Hero’s backstory; and you can see clearly how it’s all going to lead to a showdown back in Samurai Town.

Despite the predictable structure, there are odd spikes of plot that don’t add up to much, diversions from Hero’s story that don’t quite become unexpected structural gambits. Yasujiro’s story never feels like more than a distraction, for example. The background and beliefs of the inhabitants of the Ghostlands are interesting, but don’t feel like they add much to the film. Even the flashbacks, while visually distinctive, don’t feel necessary — there are plot ramifications to what we see beyond what we learn about Hero’s character, but again nothing surprising.

For me a lot of the movie’s scattershot feel comes down to a lack of clear thematic interest. You can say the movie’s about a couple of things — most of the characters are looking for some kind of freedom, there’s perhaps some interest in genuine culture versus sideshow pastiche, some bits to do with the remorselessness of time, a nod towards environmental concerns. And none of these things connect with each other, and none of them feel critical to the structure of the film. It’s a movie that never focuses on anything, in plot or in theme. There’s an overall sense of irony, but it’s not a satire. Events are connected, there’s a clear dramatic arc for Cage’s character, but it still feels like a bunch of stuff that happens more than a satisfying story. 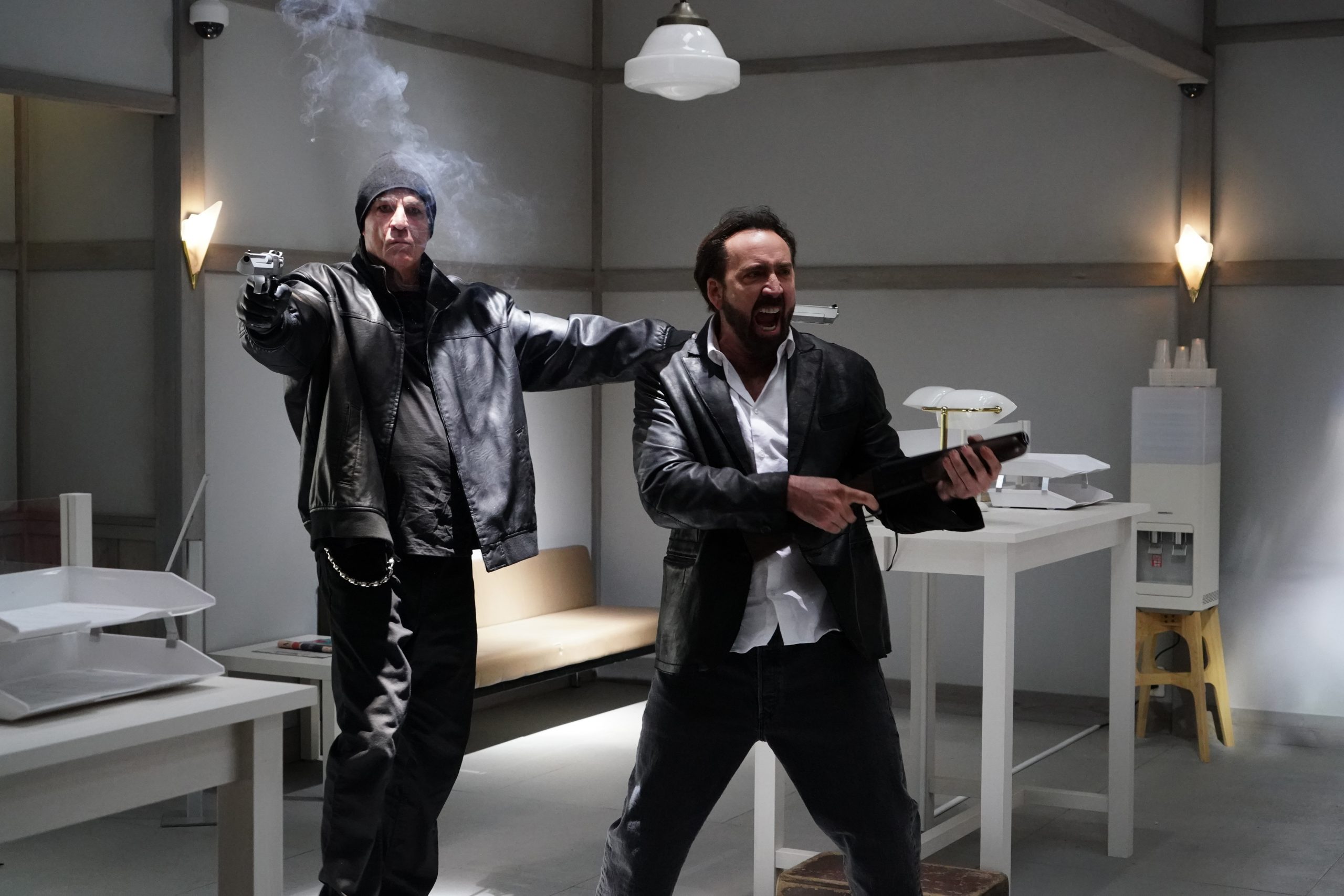 At least there is stuff that happens, gunfights and swordfights and explosions. And Cage does find some good moments to amp up his performance. The problem is that there are long stretches between all these things, and too often Cage seems unengaged with the material. There’s a weariness to his performance here that only partially fits the character. You watch him and you wonder if he isn’t getting too old for this; he’s 57, and playing the lead in an action-oriented movie. Unsurprisingly he doesn’t get much action stuff to do, and there are moments where he seems to struggle to pull off the physicality of the role. Then again, he’s working with a bare-bones character even by the standards of this kind of film, and it seems like without that kind of grounding he can’t go over the top as much as one might want — and for this movie to work it needs to go gloriously over the top as much as possible. Which I don’t think quite happened.

There are interesting moments and details, but it’s difficult to praise anything in this film without following it with qualifiers. The production design’s filled with odd little details, and a neon lighting scheme that pops up when you least expect it. But there are only two major locations in the film, Samurai Town and a settlement in the Ghostlands; throw in a nondescript setting around the border and a bank seen in the flashback sequences, and you’ve got almost all the places you see in nearly the whole movie. You could argue that Samurai Town and the Ghostlands are meant to reflect each other, with the border scenes mediating between them, and it is true that there are some odd parallels between characters in the two communities. I didn’t find much was done with it, though. And whether this is the idea or not, in practical narrative terms bouncing back and forth between these two places limits the scope of events.

Still, the Ghostlands in particular is interesting to look at. There are definite echoes of 80s post-apocalypse visions, but there are also some interesting design choices, notably around the distinct culture that’s sprung up there. The main location’s dominated by a massive clock against which the Ghostlanders struggle, for example. And yet that principal set also feels, if not small, at least too much like a set. It’s artificial without a clear consciousness of artifice, something too common to the film overall.

This is a movie that falls between two or three different stools. There are action elements, but not enough of them executed with enough style and integrated well enough into the plot. There are inspired visuals, but not enough of them. There’s a distinct sense of irony, but also too much seriousness for the film to work as a piss-take. It’s not quite excessive, and certainly not entirely serious, and while it’s entertaining it’s anything but consistent. 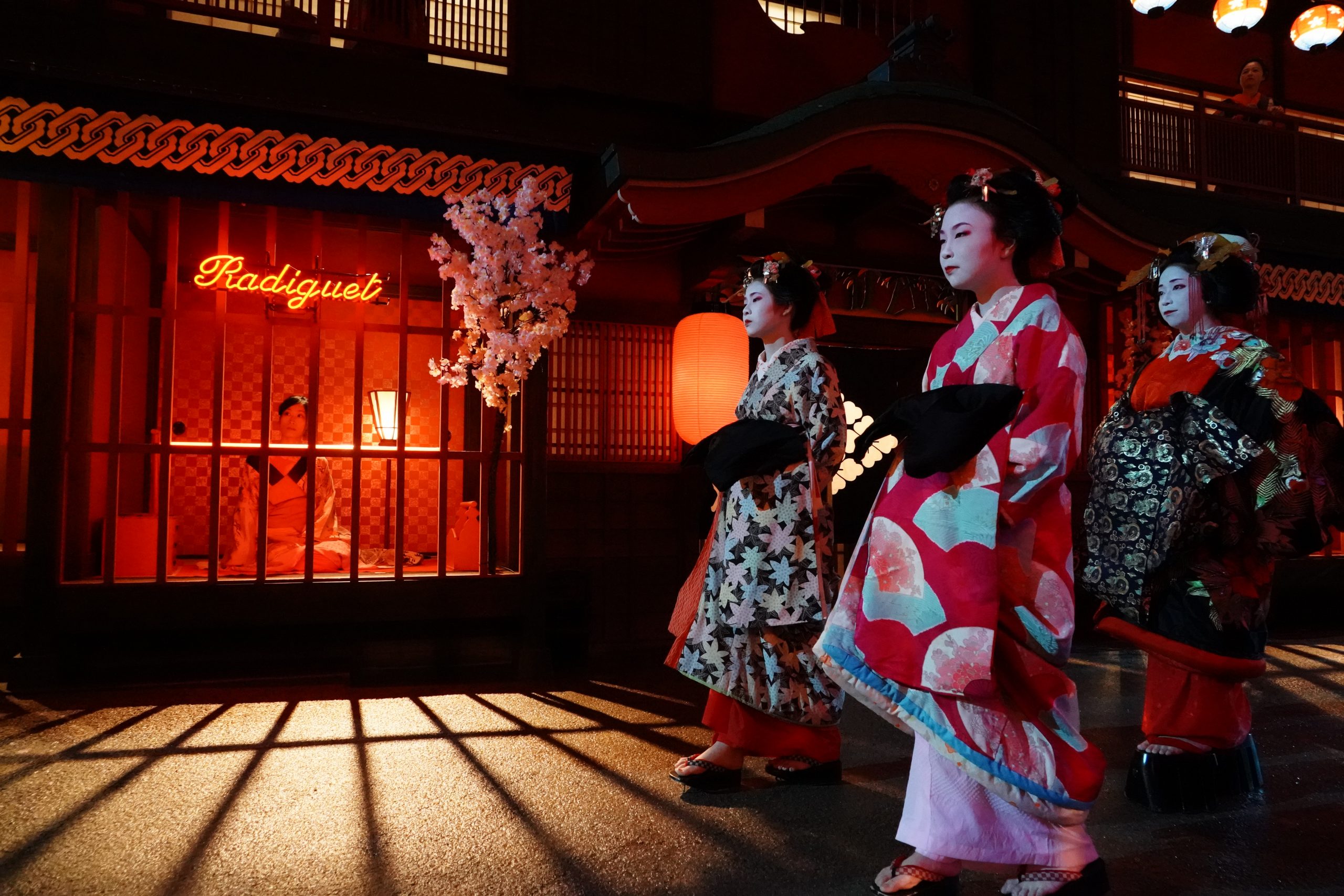 In the end, I find myself wondering what there is in this film that isn’t done better and on a bigger scale in Mad Max: Fury Road. Both movies are about outcast loners unwillingly chasing fleeing women, both feature journeys into badlands and then returns, both feature wild production design. Mad Max has a much larger budget; theoretically Prisoners of the Ghostlands has weirder creators involved. But you don’t see that often enough. It’s a movie that has some nice touches, but ends up merely a watchable oddity. It’s entertaining, it’s got a lot of stuff to look at, it does things you don’t expect in an action movie (as well as stuff you do), but it’s a bit less than the potential sum of its parts.