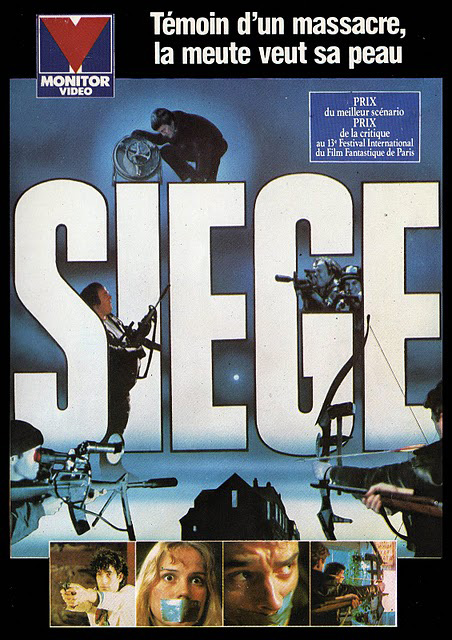 You ever watch one of the long video game cutscenes that passes for movies these days and think “I kinda miss old, raw-looking films, like early Romero and Carpenter. Something that had teeth. Heart. Balls. They don’t make ’em like that anymore.”

Whether they do or don’t make them like that anymore is another blog post, but a good way to go back and get that early Romero vibe is to seek out overlooked titles from the era. One of those is the Canuxploitation shocker Siege (1983) (released in the USA as Self Defense and sometimes Night Warriors). Thanks to Severin Films, this lost thriller is now available to today’s Blu-ray audience and streaming through sites like Amazon.

Now I’ve seen this movie labeled online as pastiche/homage/ripoff of John Carpenter’s Assault on Precinct 13. YMMV, but to me this is the work of a couple of filmmakers (Paul Donovan and Maura O’Connell of DEFCON-4 fame, most memorable for its excellent poster) who love Assault and want to make something like it, but improve on its weaknesses. They gave the attackers faces, names, and characters, cutting down the numbers to a handful, and made the defenders more vulnerable by putting them in two-story apartment quad, rather than a fortress-like police station. But I get ahead of myself.

The story opens on the mean streets of Halifax, Canada, during a 41-day police strike that was a real life event that gave the movie its framing. I don’t know whether Canadians would chuckle at making Halifax’s skyline look ominous against the setting sun at the beginning of the film, but it’s a fine tradition for this sort of horror comfort food and we move on to real news footage of the coverage of the Halifax police strike ending with prophetic words predicting a night of “rowdyism and tire-squealing.”

The rowdyism starts as a car pulls up to quiet commercial street. Visual cues tell you this is a more downmarket part of the city. Five beefy guys wearing arm-bands that read “N.O.” get out and take assorted bludgeoning weapons from the trunk. They head inside an unadvertised entrance. We soon learn that this is a literally undergroun gay bar called “The Crypt” (I don’t know what the gay nightlife was like in Halifax but at least in this part of town gays and lesbians go to the same place). Team N.O. is here to do a little gay-bashing, or at least that’s what it was called near the Twin Cities in Minnesota where I grew up in the bad old days.

What follows is shocking and visceral, for 1983 or today.

Any philosopher, general, or emergency room physician will tell you that once violence starts, it can escalate in unpredictable ways. After they make prisoners of the people drinking in The Crypt, the head thug gives a nasty speech that I can only hope was unrehearsed: “We’re here to deliver message to you homo boys — being a homo is not a normal way of life!” It goes on like that for a bit and I’m sure you’ve heard similar, gays can magically corrupt the unaware by, you know, breathing or whatever, and the normal people are fed up and are finally fighting back by going to a members-only club with axe-handles, baseball bats, and hammers. Just like normal people do. There’s a scuffle and the thugs kill the bartender when he falls on a broken bottle.

Even the dimmest of the grinning N.O. team sobers up and sees that they’ve exceeded orders. This is one of the film’s strengths, the bad guys are a range from dopey to phony tough to genuinely scary, but it’s clear over the next sixty minutes of film that they got in over their heads and act like it. We soon learn who has given them their instructions for the night: the leader of the local chapter of the “New Order,” a big older guy in a leather jacket named Cabe. They call him in and he sets about explaining that a death could put the New Order in a bad light, so his solution is to kill all the witnesses with a silenced Luger. Meet the New New Order same as the Old New Order. The next few minutes of the film aren’t pleasant. One of the prisoners, a young man named Daniel, escapes his bonds thanks to a tiny pocket knife. Using a combination of athleticism and wits, he evades the N.O. killers and makes it to a quad apartment building, two above and two below. Nobody there knows him and if there was a reason he chose this building, other than the fact that the lights were on, I missed it. In any event, Daniel finds refuge with a man named Horatio, his girlfriend Barbara (who, refreshingly, no one is coming to get), and two blind men who are friends of the couple. In the apartment next to theirs on the second floor is a curious young diver with a very specific set of skills, and in the apartment below a drunk cat owner.

The apartments, I might add, are almost as much of a character in the film as the people. There are infrastructure quirks to the top two apartments. They are so odd and filled with personality that I assumed they belonged to the filmmakers or cast and I turned out to be right.

Now the film really gets going. The killers try to talk their way into getting the residents to release Daniel to their custody but lose their temper quickly and start issuing threats at the first refusal. Cabe shows up with an arsenal of silenced weapons and the siege begins. They post a sniper on a nearby rooftop (he communicates with Cabe using strict and terse radio procedure that has a nice payoff). The residents have only odds and ends to defend themselves: a sports bow and a single arrow, a rifle with two bullets, and a vintage bayonet. Even the lack of ammunition is a colorful and character-building detail, the diver incontinently shot off almost all of his ammunition supply the first night of the police strike for laughs. Beyond their pathetic arsenal, all the residents have are their wits and a distinct home field advantage as they know all the little quirks, nooks, and sounds of their unique building.

I enjoy this sort of low-budget filmmaking when it is competently executed. Night isn’t muddy, you can see what’s going on, hear every line of dialog, and distinguish the characters even at a distance thanks to the physical presence of the cast and their costuming. The film grain and color is so evocative of Romero I was wondering if they sent it to the Master’s Pennsylvania lab for processing. There’s even some gore worthy of Tom Savini. It’s a little rough, at times the silenced weapons sound like Flash Gordon ray guns, and some of the ballistics of room-to-room, Stalingrad-style fight make me wonder, but I was too into the story to mind. In some ways the story is better than Assault on Precinct 13. Because the enemies are not a mostly-faceless mob climbing through the windows like zombies (“sure, the last five guys trying to get in through that window were shotgunned, but law of averages says I have to make it, right?”), there’s a sense of victory every time Team Don’t Murder Homosexuals manages to knock one off.

Of course Carpenter’s polish and genius theme music are missed.

All the roughness just makes it more real to me. Maybe a little too real. For all its dust of nearly thirty years (and I don’t mean on the print, Severin found an immaculate copy in a Nova Scotia archive) the situations and characters of Siege seem horrifyingly relevant to the 2020s. If you’re a fan of cheap-but-not-cheap-looking actioners like Romero’s The Crazies this piece of Canuxploitation is well worth ninety minutes of your time.