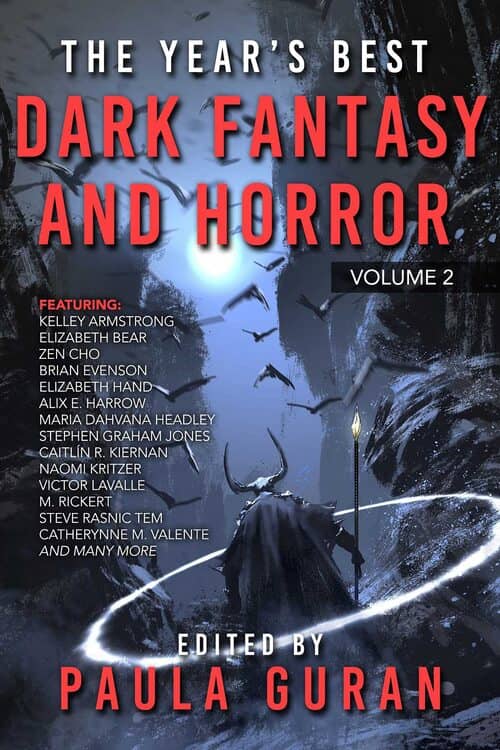 Clearly it would be impossible (and tedious) to comment upon each one, hence I will only mention those which especially impressed me. In other words my personal “best” among Guran’s best.

“Recognition” by Victor Lavalle is a disquieting story set in a New York apartment building where flats are vacated little by little during the first COVID outbreak, while “ Odette” by Zen Cho is the neat description of the difficult relationship between a young orphan, her stern uncle, and the house where they live.

Dale Bailey contributes “Das Gesicht,” a subtly horrific tale set in the world of cinema, about love, violence and stardom’s hidden truths, while Steve Rasnic Tem provides an insightful alternative to the usual zombie clichés with ”The Dead Outside My Door,” a visionary tale about the dead who surround us.

In the fascinating dark fable “Swanskin” by Alison Littlewood, in a small village of fishermen swans are deprived of their skins and feathers in order to turn into women.

“Wait for Night” by Stephen Graham Jones is a well told story full of surprises where, after the discovery of a skeleton buried among the roots of a tree, violence and horror erupt.

The perceptive “Where the Old Neighbors Go” by Thomas Ha portrays a stubborn old woman confronting a neighbor whose new house is somehow polluting the atmosphere of a country hill.

In the intriguing “Dead Bright Star (July 1987)” by Caitlín R Kiernan, a young woman describes to her psychiatrist (mixing some truths and some lies) meeting a mysterious ghostly woman in the attic of her house. The session ends and (unfortunately for the readers) the mystery continues.

Naomi Kritzer pens “Monster,” in which a successful scientist moves to China, following the footsteps of a former friend turned into a murderous monster thanks to her previous scientific discoveries.

“Last Night at the Fair” by M Rickert is a beautiful tale full of magic, exploring the secrets of life and youth revealed during an unforgettable night at the fair.

Mario Guslandi was born in Milan, Italy, where he currently lives. He became addicted to horror and supernatural fiction (too) many years ago, after accidentally reading a reprint anthology of stories by MR James, JS Le Fanu, Arthur Machen etc. Most likely the only Italian who regularly reads (and reviews) dark fiction in English, he has contributed over the years to various genre websites such as Horrorworld, Hellnotes, The British Fantasy Society, The Agony Column and many more. His last review for us was December Tales edited by J.D. Horn.