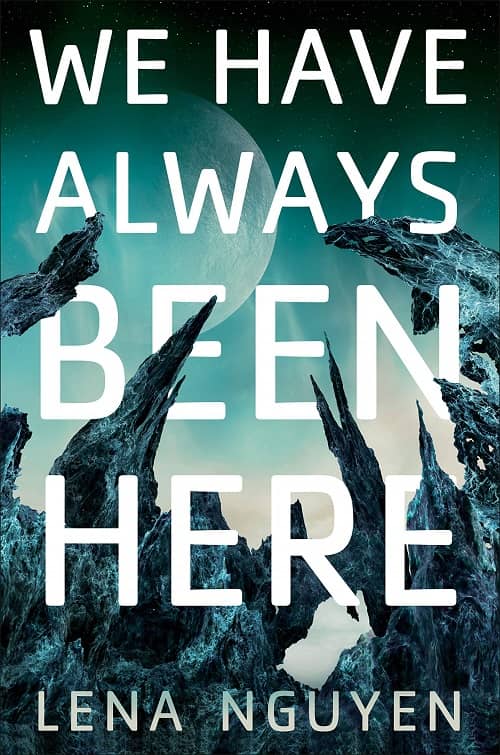 We’re back! Well, we never left, but a corrupted database table made it…. challenging to publish new articles. That happens when your site is 20 years old and has half a million subscribers. So they tell me.

I’m sick of looking at database tables, let me tell you. What do I want to look at? Books! Come on, that was an easy one.

So tonight I settle down with a new science fiction debut, a creepy novel of deep space exploration by Lena Nguyen. Kirkus Reviews calls it “claustrophobic and dark, full of twisting ship corridors and unreliable characters…. A promising, atmospheric debut,” and The Chicago Review of Books praises it as a “multi-layered ghost story in space… [set in] an increasingly horrific labyrinth.” Here’s the publisher’s description for We Have Always Been Here.

Misanthropic psychologist Dr. Grace Park is placed on the Deucalion, a survey ship headed to an icy planet in an unexplored galaxy. Her purpose is to observe the thirteen human crew members aboard the ship — all specialists in their own fields — as they assess the colonization potential of the planet, Eos. But frictions develop as Park befriends the androids of the ship, preferring their company over the baffling complexity of humans, while the rest of the crew treats them with suspicion and even outright hostility.

Shortly after landing, the crew finds themselves trapped on the ship by a radiation storm, with no means of communication or escape until it passes — and that’s when things begin to fall apart. Park’s patients are falling prey to waking nightmares of helpless, tongueless insanity. The androids are behaving strangely. There are no windows aboard the ship. Paranoia is closing in, and soon Park is forced to confront the fact that nothing — neither her crew, nor their mission, nor the mysterious Eos itself — is as it seems.

We Have Always Been Here was published by DAW Books on July 6, 2021. It is 368 pages, priced at $27 in hardcover, $14.99 in digital formats, and $30 for the audio version. The cover is by Yurly Muzur. Read a lengthy excerpt at the publisher’s website.

Sounds quite interesting, but…the beginning of a series? I usually prefer to waiti for a series’ completion before starting.

Hey RK! I don’t think it’s the beginning of a series. What makes you think that?

Not sure, just kinda felt like it. Now that I reread the post, I still have that hunch. Has the author said anything?

“Lena’s next project is to design, write, and code a full-length, choice-based interactive high fantasy game, as well as to finish her new speculative wasteland adventure: an assassin’s desert romp that lies somewhere between the realms of Mad Max and X-Men.”

Plus it only seems to be available in hardback?

Yeah, hardcover, plus digital and audio formats. The bought the hardcover through the Science Fiction Book Club.

Interesting…..the book IS available on amazon.ca in all three formats, but not on amazon.com or amazon.co.uk, which only list hardback and audio. A rare example of Canada having the edge over its US & British cousins?

glad Black Gate is back, i was worried and lost.

i am glad DAW is still publishing stuff, i feel like i didnt see stuff from them for a long while, but they certainly were formative in years past, this one sounds interesting, little horror in there with my sci-fi is always a good thing… well, most of the time.

I’ve seen some very interesting titles from DAW recently, including:

– The Godstone by VIOLETTE MALAN
– Winterlight by KRISTEN BRITAIN
– The Scavenger Door by SUZANNE PALMER
– When Jackals Storm the Walls by BRADLEY P. BEAULIEU
– The Ice Lion by KATHLEEN O’NEAL GEAR
– Titan Song by DAN STOUT

That’s not a bad list for the past few months!

Let the joyous news be spread
The Black Gate site is far from dead!

The title sounds reminiscent of Shirley Jackson’s *We Have Always Lived in the Castle.*

James — I thought the same thing!