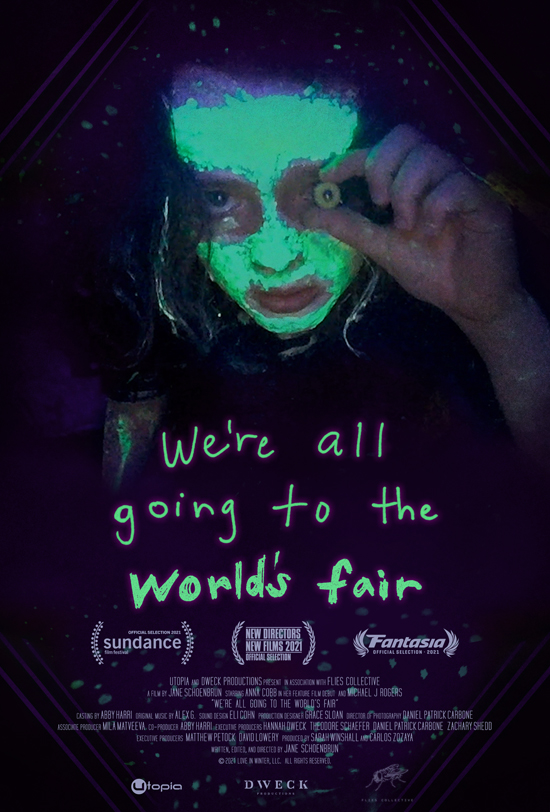 My last film of the fourth day of the 2021 Fantasia Film Festival was We’re All Going To The World’s Fair, written and directed by Jane Schoenbrun. It’s not technically a genre story, unless you give it a highly determined reading, but it is a story about genre. It’s also a coming-of-age story, a story about a girl trying to find herself and work out her own story from the inspiration of genre tales she loves — even if dangers may come with it.

The movie begins with a long take introducing us to Casey (Anna Cobb), a young teen girl sitting before her webcam. She enacts a simple ritual that begins a — game? spell? We’re not sure at first what to make of what she’s doing; then she tells us of the World’s Fair Challenge, where people perform the ritual we’ve seen and, over time, change mentally. And they upload videos as they do, documenting their progression as they change from what they were into something else entirely. We see some of these videos interspersed among Casey’s own recordings, which she puts up on the web documenting her changes, and her hopes, and her reflections. And then we see an older man, JLB (Michael J Rogers), reach out to her claiming to have secret knowledge about the World’s Fair Challenge, and we doubt his good intentions, and we start to worry even more about Casey and where this challenge will take her.

For a large part of the movie we’re not really sure what’s happening. Almost everything we see is mediated one way or another, something recorded by someone for their own reasons — Casey’s video diaries, or JLB’s weird distorted messages, or other World’s Fair videos. What do we take as reality? Is Casey, who talked about how neat it would be to live in a horror story, going mad? Is there a supernatural force involved? Is she telling a story?

This is a movie that uses ambiguity deeply and well, down to the final scene. It’s particularly effective because it plays about with the ambiguity and uncertainty I would guess many people have felt on seeing something online they’re not entirely sure how to parse. The internet makes it easier to find out the context of many things, but not everything, and people skillful in manipulating the forms of the internet can create an awful lot of uncertainty.

As I read it, the film’s about the nature of stories and about the collaboration between storyteller and audience. There are other readings, I think, but to me the structure of the movie is based around looking at the stories people tell. In particular, how both social and personal identity flow from the stories we tell ourselves about who we are and what we’re doing and why — and how other people react to those stories. 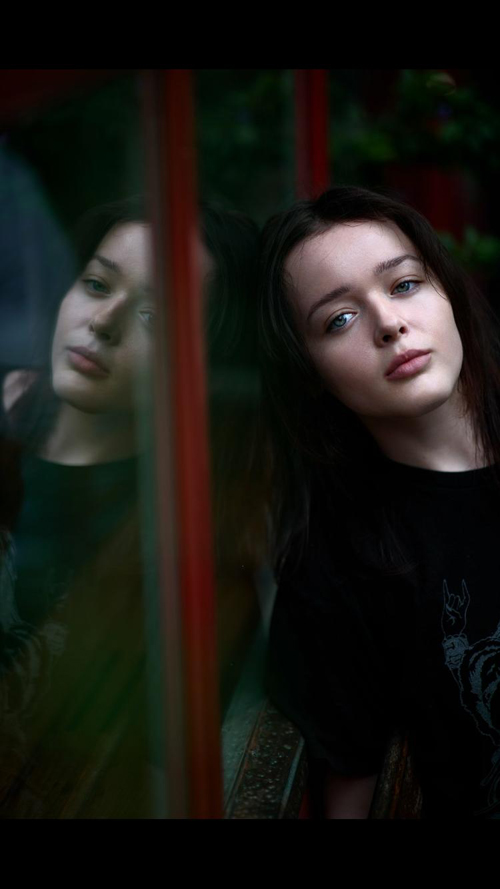 The film’s about the way stories interact with reality, to a point, but also about how stories can thrive in the empty spaces reality may leave us. Casey’s home life is rarely seen. We hear a male voice offscreen once or twice, and she lives in a large house so we can assume her family isn’t hurting for money. But whatever her relation to the people she lives with, she does not choose it to make it a part of the story we see, and the implication is that it is not really core to who she is. She lives in a small town somewhere in the northern United States, probably in the northeast, and again that physical space around her seems relatively unimportant to her life — or, at least, the individuality of the place is less significant than the generic suburban emptiness. It is notable that one of her more powerful early videos is shot in the woods, deep in nature, well away from any sign of a community of other human beings.

I read the movie as being ultimately about Casey working out a story for herself, and how to tell that story. Therefore I take it as an assertion of Casey’s individuality and power, a statement about the force of her personality. And a statement about her willingness to push boundaries as a young artist, someone experimenting with the tools natural to her — technologies new and as-yet unexplored. And someone who, in doing this, is willing to push herself to the boundaries of her selfhood. 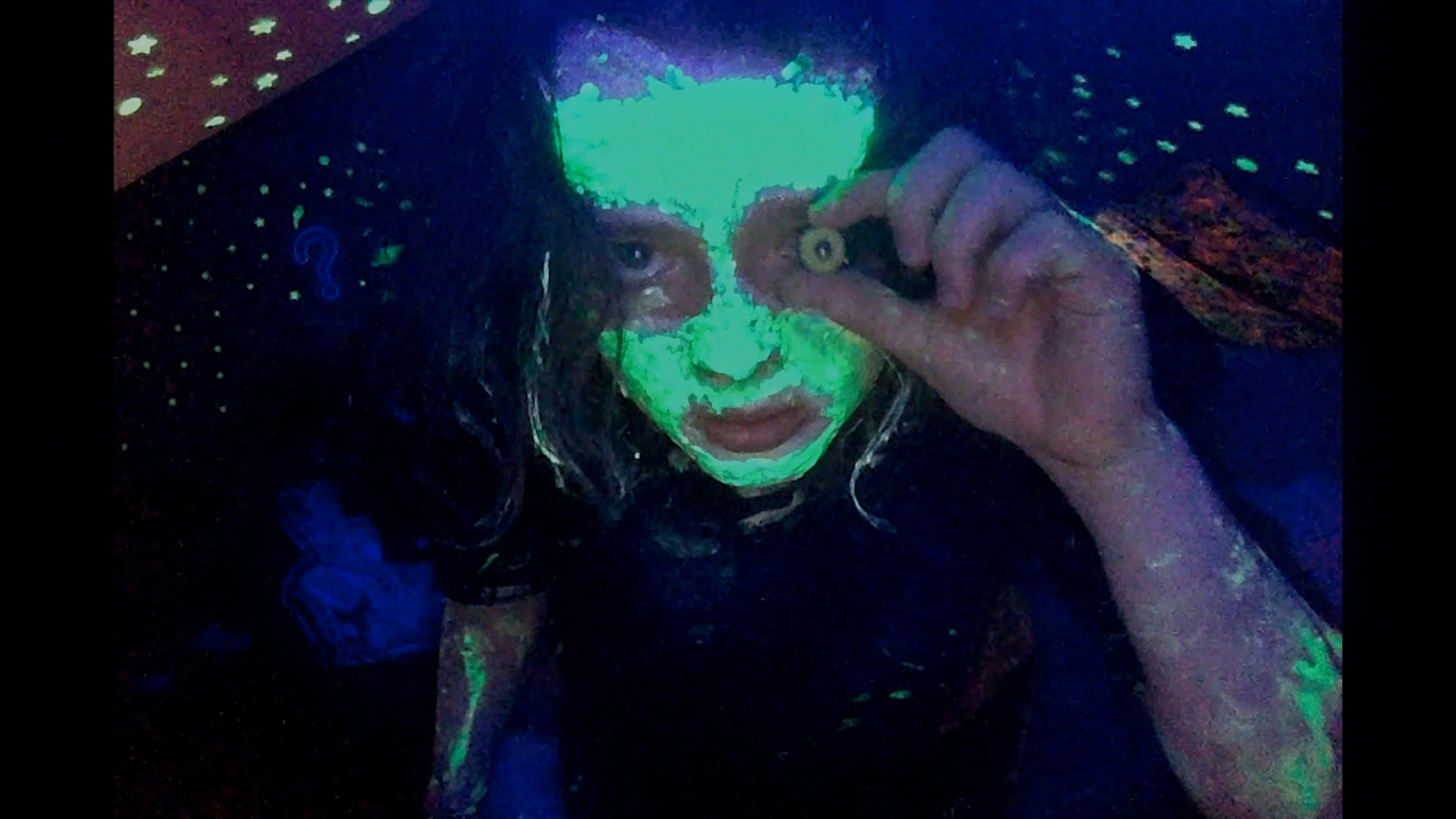 This would not work without incredible work by the lead actress, and fortunately Anna Cobb is up to the challenge. She delivered perhaps the best performance I saw at Fantasia this year, inhabiting Casey utterly from the first moments of the film. She’s able to get across the turbulence of the emotional life of a teenager, and also get across how that’s being funneled by Casey into her videos. She’s able also to hint at an even deeper level of emotional life underneath the dramatic scenes we see.

And the script is also evidently informed by personal experience. Fantasia held a fascinating Q-and-A with writer/director Jane Schoenbrun, a trans non-binary filmmaker, in which they talked about their own past with horror movies and creepypasta, and discussed how they encoded their experiences of dysphoria and transness into Casey’s story. I cannot claim to have caught any of that in my viewing of the film, but what Schoenbrun said makes a lot of sense as an analysis of their own work, and looking back over the movie there are resonant lines from Casey (as when she talks about leaving her body and becoming someone else) that lend themselves to this reading.

We’re All Going to the World’s Fair is low-budget filmmaking, but it’s effective low-budget filmmaking — a movie that turns its limitations into strengths. It’s an excellent story about a young person exploring who they are through the art they make, not just a blidungsroman but a künstlerroman. It’s also, incidentally, about the new potentialities offered by new technology. And it’s about what it’s like to inhabit a story, as everyone must. It’s powerful, unconventional work.