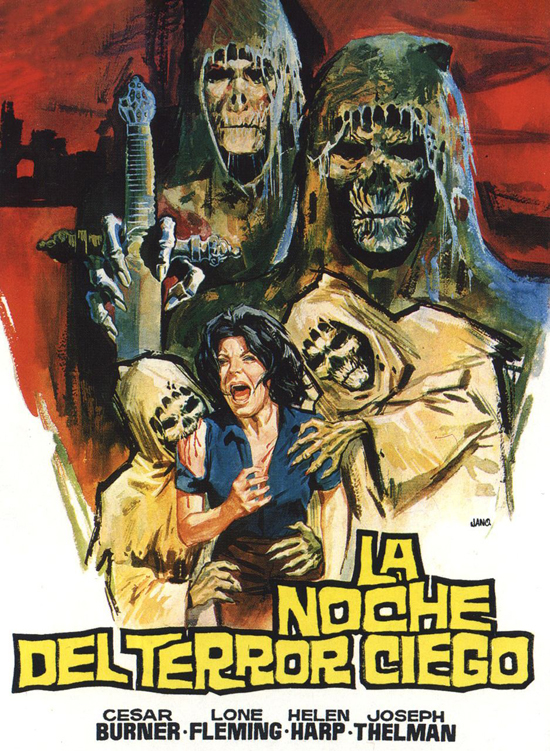 Written and directed by David Mataró, “Tongue With Capers” (“Llengua amb tàperes”) is a 15-minute Catalan-language short involving the walking dead. Months after a zombie apocalypse, a man (Toni De los Ángeles) holed up in a bar rescues his neighbour (Aina Cortès), who has a strange plan to communicate with the zombies. The film plays as a huis clos, two actors in a single location, with quick dialogue and a twist at the end. Like most zombie movies, it’s about human beings and how they behave to each other; in this case there’s something to say about how well we knw each other and maybe what it’s like to be in community with each other. It’s a nice piece, with a fair bit of nastiness but little gore.

Bundled with the short was the classic 1972 Spanish-Portuguese feature Tombs of the Blind Dead (La noche del terror ciego, also known in English as The Blind Dead, Tombs of the Evil Dead, Legend of the Blind Dead, Mark of the Devil Part 4: Tombs of the Blind Dead, Mark of the Devil Part V: Night of the Blind Terror, and, in a recut form with a tacked-on prologue, Revenge From Planet Ape). Written and directed by Amando de Ossorio, Synapse Films spent over a year creating a painstaking high-definition restoration of the movie. Tombs was quite successful on its initial release, spawning three sequels (while inspiring many other films and at least one comic) and helping to start a boom in Spanish horror cinema. I was pleased to see how well it holds up, especially in the lovely Synapse restoration.

It’s a story about a young woman, Virginia (María Elena Arpón), who runs into an old friend, Betty (Lone Fleming), only to see her for reasons of her own jump off a train near some medieval ruins. This leads Virginia to investigate the ruins despite the superstitious dread the locals feel for them. There’s an unexpected revivification, an archive of old books, a crew of smugglers. And, at the core of it all, the blind dead.

Once, you see, there was an order of medieval knights who went on a Crusade and picked up forbidden knowledge in foreign lands. Condemned and destroyed by the Church, they sold their souls to the devil and lived on past their deaths at the Church’s hands. (The knights are never called ‘Templars’ in dialogue, so we must assume this is some entirely different order of medieval knights who acquired forbidden knowledge during the Crusades and were destroyed by the Church.) Their eyes plucked out by carrion birds, Satan restored them to some semblance of life, and now they track the living by the sound of their heartbeats and pursue them on equally-undead steeds. 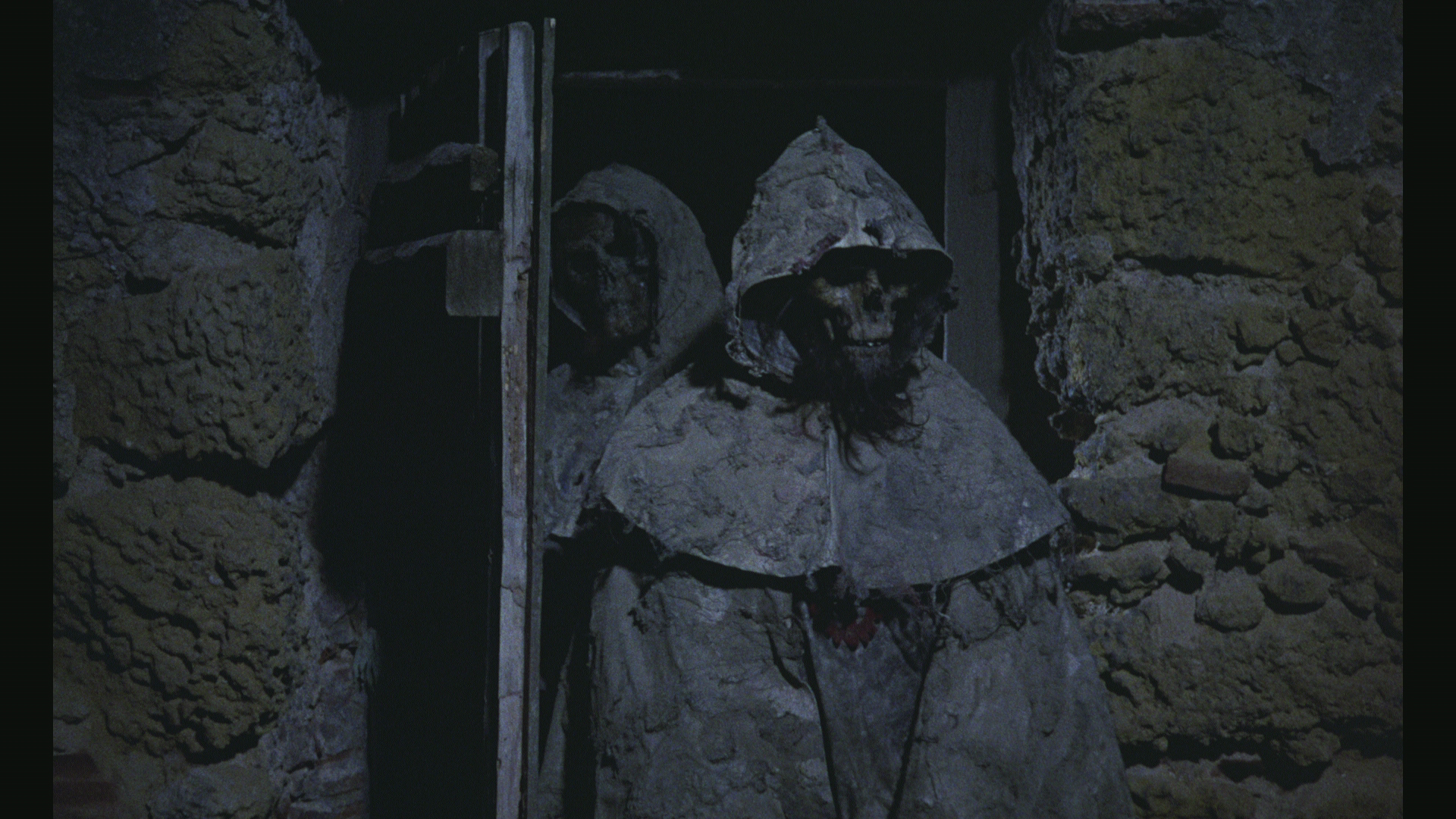 It’s a strong central idea for a horror movie. While it seems to anticipate the boom in zombie films that really kicked into gear after Dawn of the Dead a few years later (1978, to be precise), de Ossorio was apparently quite specific that he viewed the film as a mummy movie, not a zombie movie — the knights picked up their forbidden knowledge in Egypt, after all. This raises some interesting taxonomic questions about the undead, but I see de Ossorio’s point. There’s an unearthly quality to the undead knights that zombies rarely possess.

In fact the atmosphere in the film is often quite strong. There’s a long sequence early on, about 20 minutes or so, of one character exploring medieval ruins on her own; there’s no dialogue, but the film holds your interest as she pokes through one dusty disused room after another. You know that something’s out there, and something’s going to get her sooner or later. It’s a question of when — but the movie plays with suspense well enough to make a foregone conclusion feel uncertain. 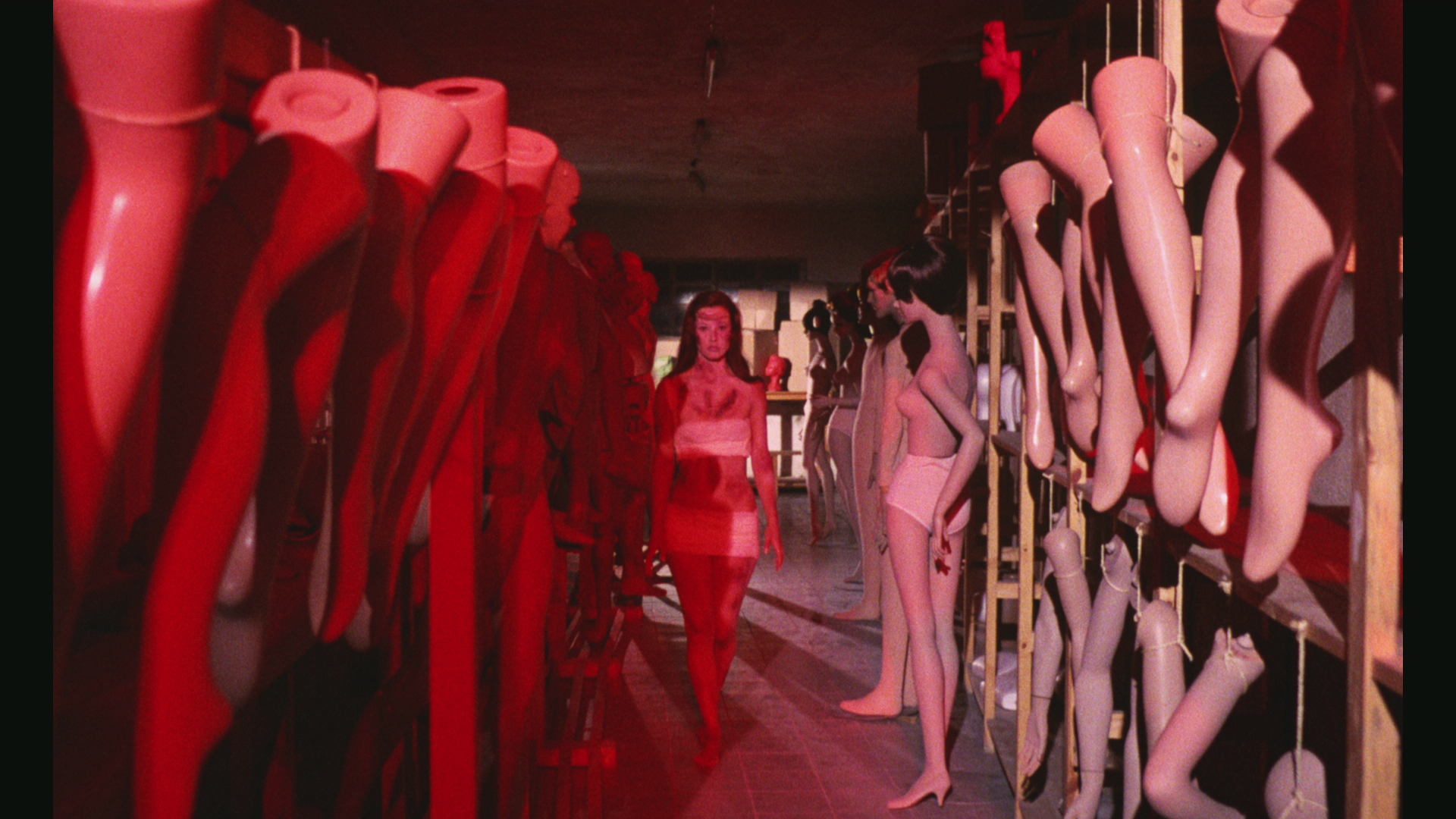 The atmosphere’s largely built by the cinematography and colours, and Synapse’s restoration allows the look of the film to shine. The dark shadows of the ruin are evocative, and a fun sequence in a mannequin factory lightly satirising the giallo genre stands out. Above all, the knights look wonderful, especially once they mount their horses and ride out in pursuit of their prey. I am far from the first to observe that these shadow-shapes in grey and black must have been an influence on Peter Jackson’s conception of the Ringwraiths.

This isn’t ambitious cinema, though. It’s a very good B-movie, which is quite enough. It’s the kind of movie which passes the Bechdel test when one cheerful bikini-clad young lady tells another, her old college roommate, about her job at the mannequin workshop near the old morgue. You will have noticed the foreshadowing of certain horror-oriented events in that sentence. If you do not also understand that the college-roommate angle will provide a tenuous reason for a flashback to the roommates exploring the joys of lesbianism, then I have not made clear what sort of a movie this is. The point is, the movie knows what sort of movie it is, and goes about being that with zest. 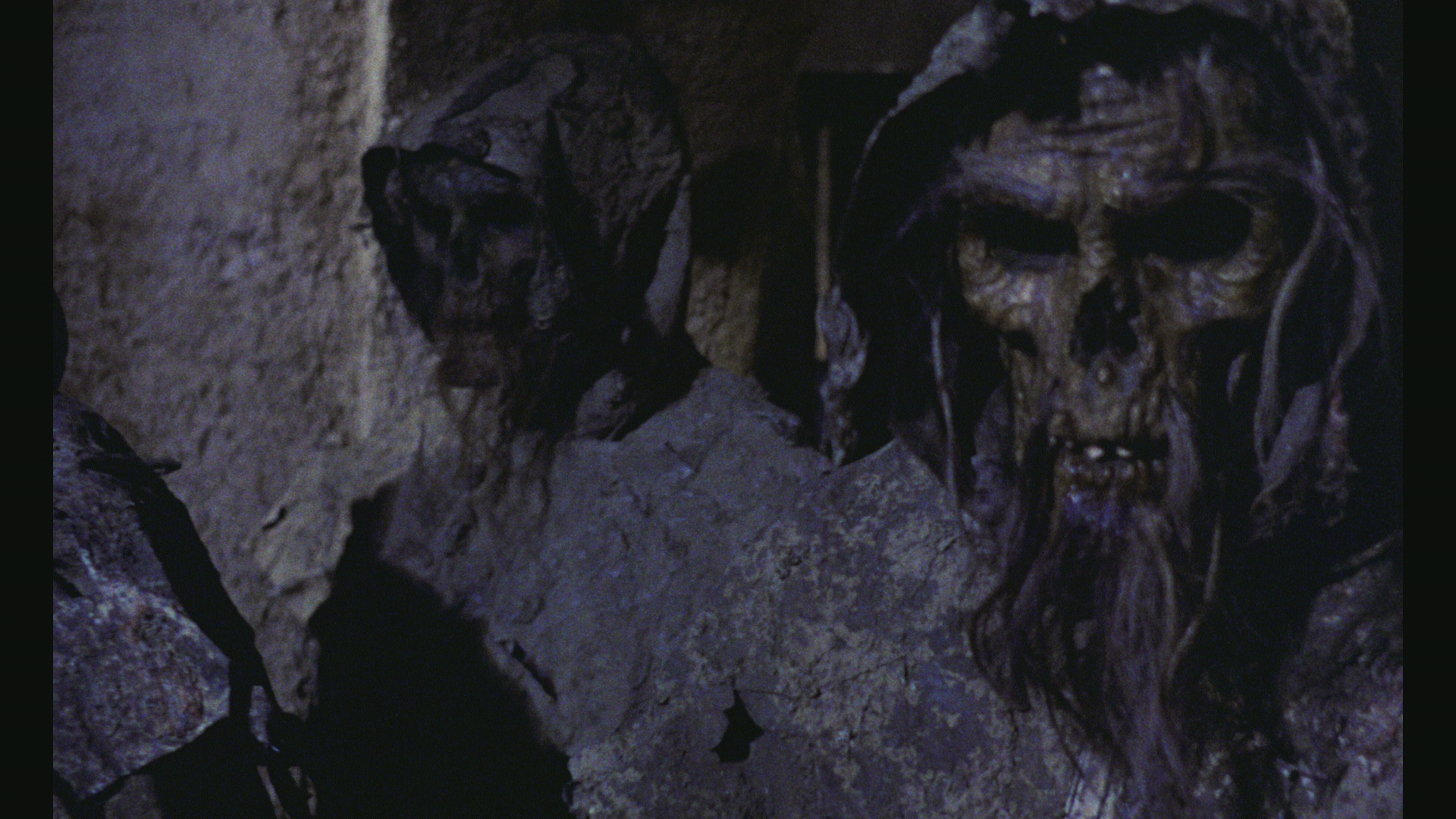 I will note that there is a scene of sexual violence toward the end which is not out of keeping with the nature of an early-70s horror movie, but will probably strike some viewers as unnecessarily unpleasant. For what it’s worth, it strikes me that this is a movie that encourages us not to take the characters too seriously. They consistently make bad decisions — which, in a horror movie, means fun decisions from a viewer’s perspective. But unlikely ones, if you view the movie realistically. My point is that the film’s not too interested in realism; the plot’s a bit of a shambles, with unlikely coincidences and an archivist who conveniently stumbles into the story just in time to provide the audience with an explanation of the monsters’ backstory.

It’s an interesting backstory, to be sure, though as you might expect the mythology’s a bit underexplored — the point of the undead knights is that they’re undead knights. If you know too much about them they’d be less terrifying, and the movie does a decent job of giving enough information to be evocative without being too definitive about their nature. And there is a cute bit in the plot where some characters go to the knights’ ruined home expecting to find local criminals behind the stories of the undead, meaning that this movie gives us the rare reverse Scooby-Doo plot: instead of finding the monster’s actually Old Man Jenkins, it turns out there isn’t a gang playing tricks on the locals but the actual living dead.

Oddly, the gimmick of the knights’ blindness is fitful. We do get to see them tracking by sound, but it doesn’t come up much. Tombs of the Blind Dead works nevertheless, because the undead knights have an imaginative richness and a powerful enough visual design that they make for an entertaining and original horror monster. The story’s a bit clunky, but there’s a good sense of storytelling, strong atmosphere, and a fun horror-movie soundtrack to go along with cinematography restored to a lovely crispness. It’s always fun to watch a movie that knows what it is and goes about being that with brio; and that is the case here.

Great article! The Blind Dead movies have always been among my favorites precisely for their atmosphere and striking visuals. The next 3 films in the series are interesting in how they keep changing the plot situations to new, different scenarios. The 3rd one, The Ghost Galleon, with an old, abandoned Spanish galleon floating along for passersby to board and find the Knights on board waiting is highly entertaining as an updating of the Flying Dutchman legend.
A new movie in the series just came out, but doesn’t look half as inventive or interesting as the originals.

Great coverage of the undead.