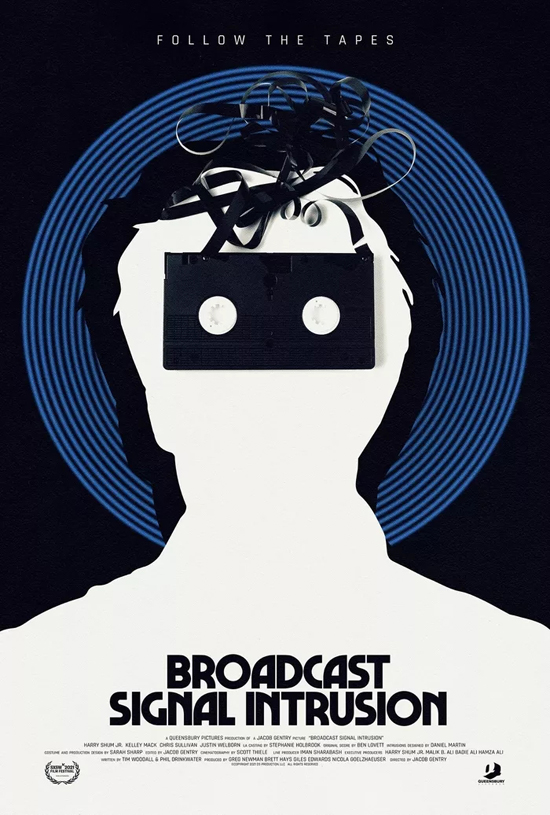 I ended my second day of Fantasia 2021 with another feature-and-short bundle. The short film was “The Machine,” a 12-minute piece about a man, newly hired for an office job, who’s given the task of figuring out the purpose of a mysterious machine in the basement. The film was shot on an obvious budget, and though the actors give it their best efforts, the material doesn’t really work. In particular, there’s a shot right at the end whose placement suggests it’s delivering a piece of information crucial to the story — but if it is, I couldn’t figure out what the information was supposed to be. There’s an interesting Kafkaesque idea somewhere in here, but unfortunately it isn’t brought out very well.

The feature was Broadcast Signal Intrusion. It’s written by Phil Drinkwater and Tim Woodall, and directed by Jacob Gentry, who also directed 2015’s Synchronicity. Like that film, Broadcast Signal Intrusion is dark and moody, following a man whose reality becomes radically destabilised. In this case, it’s a computer guy named James (Harry Shum Jr) in Chicago in 1999. He’s archiving old TV broadcasts, and becomes obsessed with a couple of weird incidents when pirates briefly took over the airwaves for a couple of minutes: broadcast signal intrusions. Driven to figure out the meaning behind them, he goes further and further down a dark path.

The film’s based on actual events, in which broadcast pirates hacked TV transmissions in the Chicago area in the 1980s. The story it tells around these never-solved mysteries is a paranoiac thriller, in which James follows clue to source to clue to source and ever on, finding more and more hints of danger as he goes. We eventually come to understand the personal tragedy that drives him, but as we do we come to doubt his perceptions. And it begins to look as if all these bits of information may not all point in the same direction. The conclusion features a disturbing scene of violence which does a good job of both alienating us and enticing us to hope for some final explanation of all we’ve seen.

The outline makes the film sound like Videodrome, one of my all-time favourite movies, and BSI is respectably close if on a much lower budget. There’s a similar movement from a relatively coherent world into a shadowy conspiracy, and along with that a movement into an unbalanced perspective — unbalanced because isolated. You don’t know how much to trust the main character. BSI doesn’t harp on this aspect of its story through much of the first half, especially as James meets a woman, Alice (Kelley Mack), who helps him in his quest. But it’s there, and it grows stronger as the story goes on. 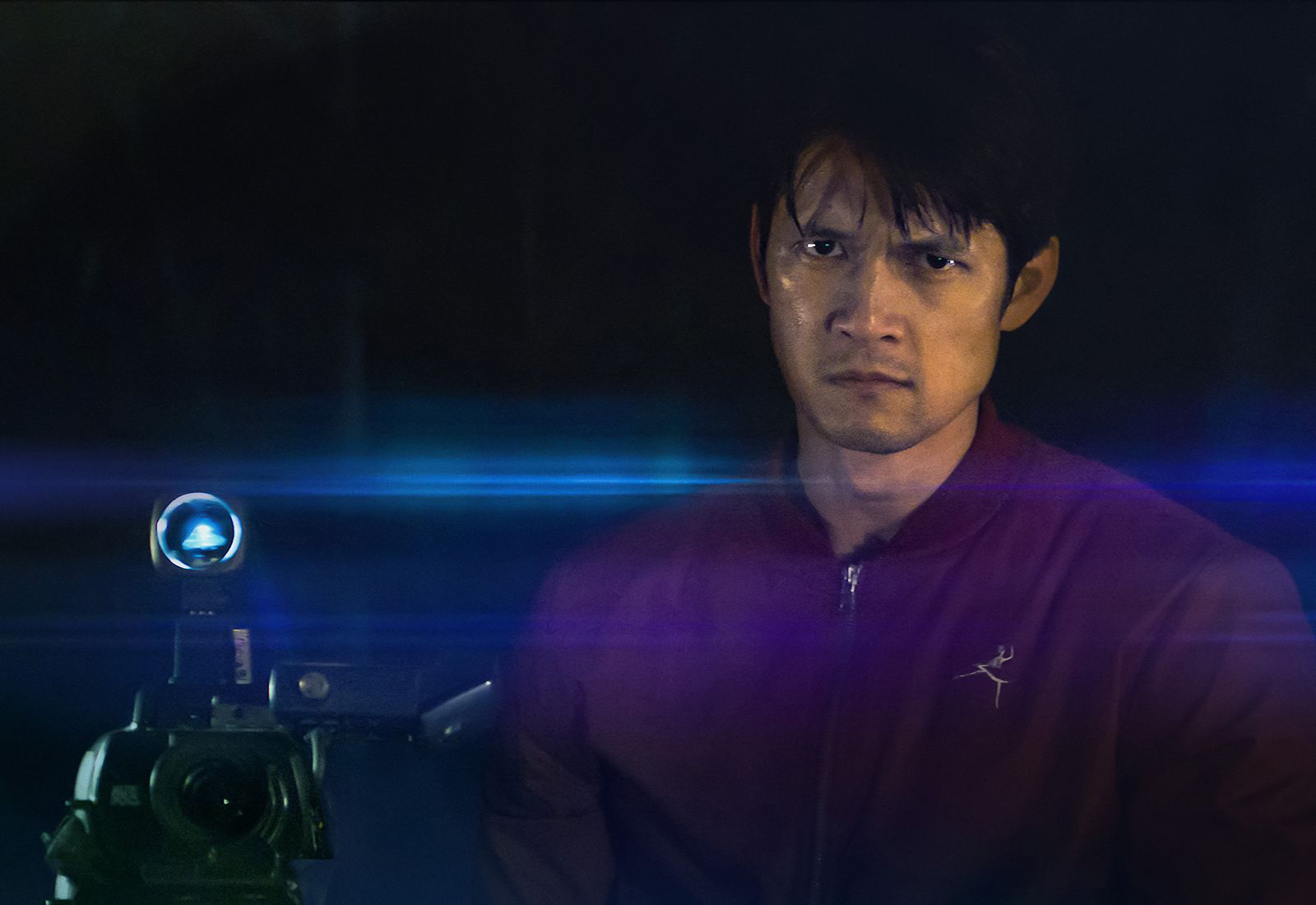 I am not ultimately sure that the story uses the device of an unreliable viewpoint character effectively. For me that technique risks unwittingly underlining the unreal nature of fiction — if we don’t know what part of a film we’re supposed to take as having ‘actually happened,’ we may end up deciding that none of it in the end actually matters. Ideally, I think, real or unreal the things we see on screen should develop theme or character; should build to some kind of unity. It’s fine for James’ story to go through twists and turns, the nature of the story even requires it, but I found myself so unsure of what I should trust and what parts of the story to believe that my grasp of James’ character was at times undermined. I think by the end of the movie there’s enough coherency to be worthwhile. But it’s a bit of a roundabout trip to get there.

At the same time, James’ perspective is our window on the conspiracy he investigates, which is to say our window on significant-seeming fragments that might be actual pieces of something or might not. The film doesn’t really come up with a traditionally satisfying resolution for the mysteries it poses, or not one that I could see at one viewing. It’s instead a kind of fantasia of paranoia, a story about obsession and not resolution, about the search for meaning and not about presenting a clear meaning itself. That’s a strong idea, and mostly works here. And it should work hand-in-hand with a lead character whose point of view is not always to be trusted.

But there’s something of an uncomfortable middle ground in Broadcast Signal Intrusion where the lack of coherence undermines James’ paranoia. That is, if what we’re seeing is fundamentally shaped or partially invented by James, why did he not create a more comprehensible paranoia? If he’s creating a story to live inside, why does that story have no internal coherency? In the end he acts on what he believes to be true, accepting a narrative which we as viewers have every reason to doubt is the whole story (if it’s any part of the story at all). So there’s a gap between what he understands to be true and what we’ve seen; but then should we in fact take what we’ve seen so far as in fact literally true? 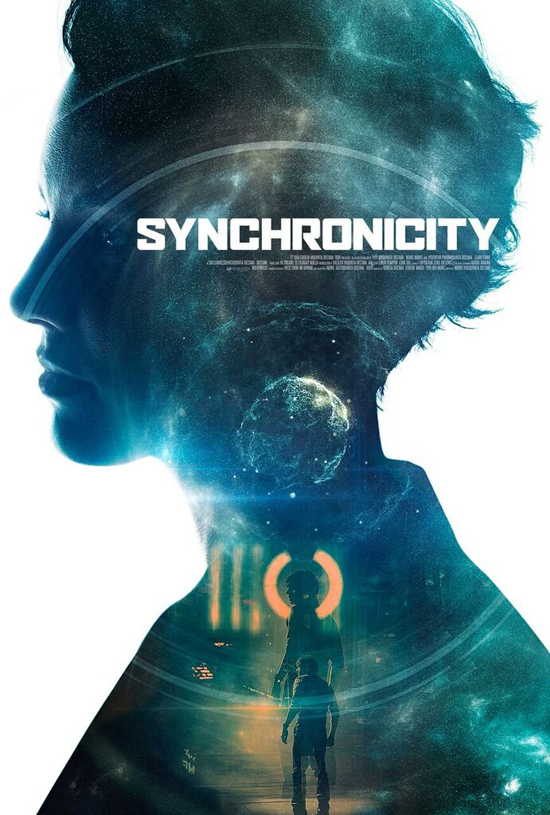 I suspect some of this was deliberate. That is, as I perceive it, the film chose to have an opaque and self-contradictory conspiracy at its core. It could have gone a different direction, but chose to focus on a story filled with paradoxes and obliquities in order to push James further into a world of delusion. There’s something admirable in this, a film that choses to avoid a standard plot shape in further of what ultimately is an extended character study. I am just not sure that the mystery works to build a coherent character.

Shum’s acting is very strong, though, and that counts for a lot. You believe in James as a person and a character, so he’s an effective centre to all the strangeness of the film. I would say also that the film uses shadows and atmosphere very well; there’s certainly an excellent selection of locations, whether James’ cluttered loft or a warren of tunnels under an antique store. There is in fact a very Ballardian feel to the film, which spends a lot of time in run-down interstitial urban places.

This echoes somehow the weirdness of the pirate broadcasts, not just as images as themselves but as intrusions into the banality of 80s network TV. There’s an implicit contrast between the unreliability of fallible human perception mediated through the mind, and the concrete memory encoded on videotape. The pirate signals are in this sense like a weird contextless psychotic break; of course looking deeply into their source will draw a stable mind into madness.

And the imagery of the broadcasts, their lo-fi uncanny-valley weirdness, is just right. It’s not only that there’s something indefinably disturbing to what we see, they’re indefinably disturbing in a very 80s and 90s way. We also, incidentally, get to see some of the shows around them, a sitcom about a step-android called SAL-E Sparks and a science-fiction show about an adventurer called Don Cronos (one of the shows the actual broadcast signal intrusions of the 80s interrupted was a rerun of Doctor Who). They’re excellent simulations of what 80s TV looked like, but they also extend the themes of the film in interesting ways.

Finally, it’s worth pointing out that the film uses its 90s setting very well. The story has to be set in the late 90s for the technology and chronology involved to make sense — the movement from analog to the web, for example, and the way the characters look back on the pirate broadcasts. But the film uses that setting well, for more than offhand references to Blockbuster Video and displays of eye-burning web pages. The late 90s was a time when the web was still developing, before social media, before YouTube, before Wikipedia. Today we can usually find some level of information online about almost anything we come across — everything has a context, and we can usually locate some of that context on the internet. Social media means that contemporary isolation takes a different shape than isolation in the 90. Broadcast Signal Intrusion takes full advantage of the environment of the time in which it’s set to develop the stresses on its protagonist.

This is a film, in all, that doesn’t do what you might think it’s going to. It is not a conspiracy thriller, but a portrait of a character on the edge. I have some qualms about how character plays out and interacts with the plot-like elements the film presents. But the ambitions are right, the priorities in the right place. It’s a film worth watching, and pondering afterward.