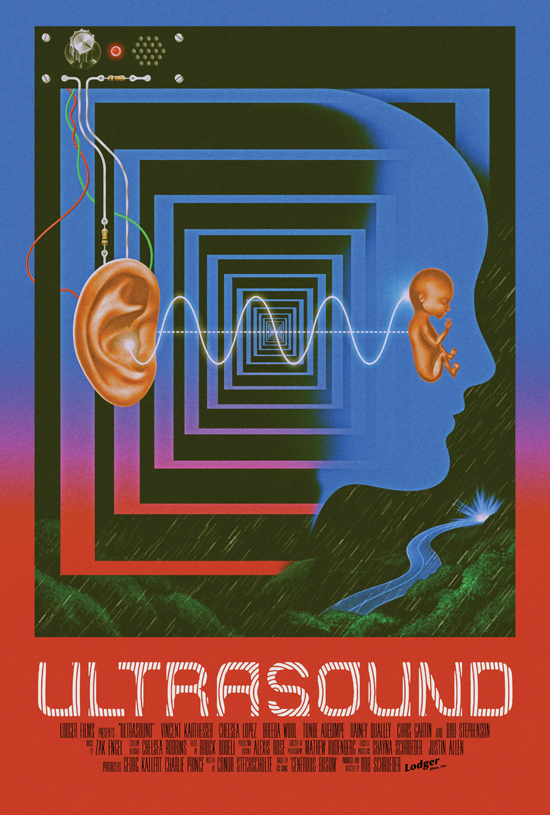 I started the second day of Fantasia with another feature and short film bundled together. The 14-minute short was the Catalan-language “Solution For Sadness” (“Solució per a la tristesa”), a collaboration between the husband-and wife-team of co-directors Marc Martínez Jordán (also the writer) and Tuixén Benet (also the star). Benet plays a woman who lives alone and battles intense depression; one day a box arrives that promises a cure in the form of a gorilla mask. But is it really a solution, or is it a cruel trick? The short has a lot to say about masks and what people are prepared to see, and the narration makes the storytelling work — it moves quickly, and there’s a dry yet heartfelt tone that’s quite affecting. The conclusion’s surprisingly empathic, and I found an ending that might have felt simple instead stuck with me after the film ended.

The feature was Ultrasound. It was directed by Rob Schroeder, with a script by Conor Stechschulte adapting his own four-volume indie comic Generous Bosom (the fourth volume arrives later this year). It is the sort of movie which gains when a viewer doesn’t know much about the plot going in, and the story’s difficult to briefly summarise anyway. But I think I can say a few things about the film nevertheless.

It begins, or seems to, with a driver (Vincent Kartheiser) having car trouble on a rainy night and taking shelter at a nearby house where the owners make him a surprising proposition. From there the story takes several twists, introduces characters in unexpected ways, and sets up various sub-plots (not all of which resolve harmoniously). Reality is repeatedly called into question. Different factions are at work, and the real main character of the story is introduced surprisingly late in the game. You have to pay attention to the hairpin turns of the story, but if you do, it eventually becomes quite comprehensible and even elegant in its structure. Still, I found some problems with credibility.

While there is a welcome theme of distrust in authority, and an effective atmosphere of paranoia and confusion, as I understand it the plot hinges on a politician who believes privately the same thing that he says publicly. Obviously this is possible, but at this point in time it feels like an unnecessary assumption if not actively unlikely. That is, the movie’s not paranoid enough about the motives of those in power: it assumes a level of integrity which is actively surprising. 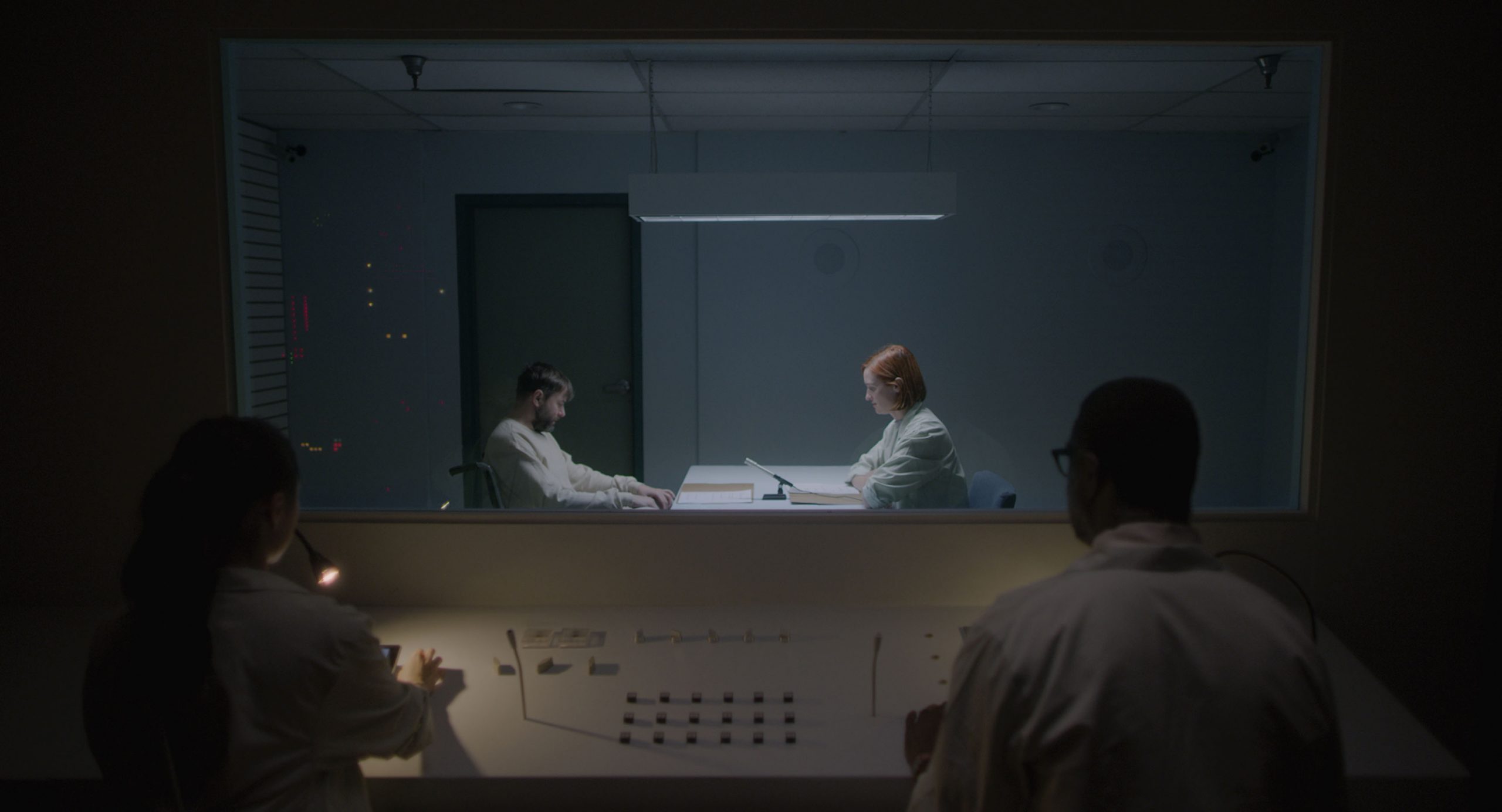 The central device of the film also pushes credibility, but at least some attempt is made to explain why extreme effects are produced by the given cause of the movie. There is a marginally science-fictional edge to the way a poorly-understood natural phenomenon is used, and it works well with the deliberate confusion of the story and the overall tone. I think it’s fair to say this is a film about the nature of reality and altered mental states; so one theme is the question of who controls reality, and to what ends. Given that, the basic logic of the story works.

Ultrasound doesn’t try to build a visually elaborate fantasy landscape. At every point the film at least appears to be taking place in this world. But its detailed soundscapes and shadowy cinematography build distinctive atmospheres that suggest the different realities at play. The movie’s also clever about disorienting the viewer by shifting perspectives in the middle of a scene, producing effects that are notably weird at first viewing but which in retrospect provide hints as to what’s really going on.

In all, for better and worse, the film plays out a lot like one of the good episodes of The X-Files. There’s a similar sense of paranoia, most obviously. And a similar playing-about with what we think we know. There’s a humanising of oddly fallible conspirators. And there are surreal images later given a thoroughly detailed and logical explanation. Most importantly, though, for all the disorienting shifts as the story goes on, the film never loses track of who is doing what why, and who is caught up in the various webs.

There is here the same kind of undermining of apparent film truth that you’d see in Inception or maybe The Matrix, but without the special effects and action elements. Instead there are elements of espionage thriller mixed into a character drama, and this works because there’s a strong sense of structure. The movie knows what it’s doing and keeps track of its levels of reality. 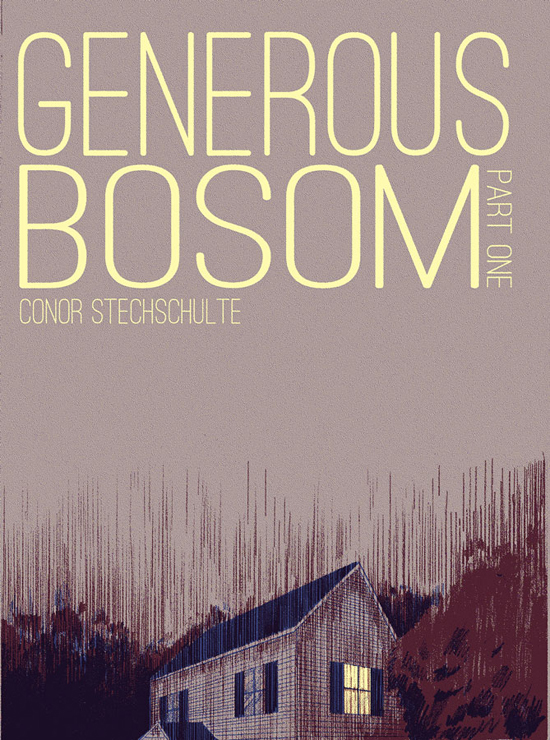 It’s on the whole satisfying, but it doesn’t end where you might expect. There is an argument to be made that there’s more of the story to be told; that the ending as it stands implies an acceptance of being in the control of others, and suggests that one of the central characters hasn’t changed since the start of the film — that he’s still prone to accept offers that look good in the short term without worrying about what they mean in the long term. I think overall this is a useful ambiguity; another character has certainly moved from an uneasy acceptance of troubling offers, an acceptance of the world as it is, to outright resistance. Does the contrast work for a conclusion? Or is there something more that should follow?

I think the contrast works and that the story’s found a satisfying moment to end on, precisely because we know it’s a moment that will not last. Something’s bound to follow on; but we don’t need to know exactly what it is. We’ve learned who these characters are, and roughly what they will do in whatever follows. In a movie that plays about with identity as much as it does reality, that’s probably enough.

What Ultrasound does is build a puzzle that works, and structures a story that plays about with the puzzle’s complexity in order to make character sense. The character decisions in turn are informed by the theme of the control of reality and the distrust of authority. It adds up. I think it may add up a little too comprehensively — the movie teases a kind of surrealism or symbolism that isn’t actually there. Instead all the imagery and disorienting touches and divergent perspectives are more-or-less neatly accounted for by a marginally science-fictional thriller premise. But the premise works, and the thriller aspects don’t overwhelm character.

Ultimately Ultrasound tells a story about perception and reality, about manipulation and the choice to be deceived or to reject a corrupt system. It’s in tune with political events of the past several years without speaking directly to them; it’s a symbolic exploration of themes important to society, in other words, which is something important. It’s a movie that does what it wants to do with intelligence and craft, which is enough to call it a success.