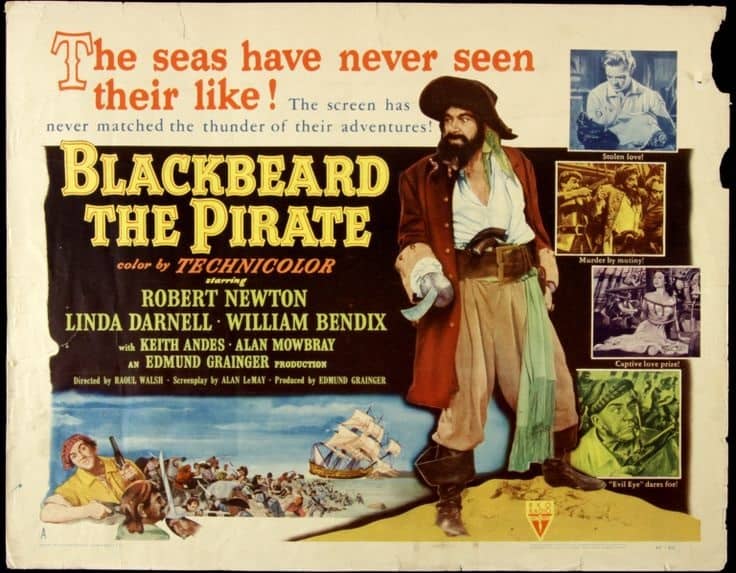 The role of Long John Silver in Disney’s 1950 Treasure Island finally launched the talented English actor Robert Newton into international stardom. As Silver, Newton popularized the broad West-Country accent that’s become the default talk-like-a-pirate voice of buccaneering rogues ever since. (You can blame—or acclaim— Newton for the ubiquitous piratical “Ahr!”) But fame ruined the actor, enabling endless rounds of drink, gambling, and the kind of wild behavior that made him a role model for Oliver Reed and Keith Moon. And Newton was never able to escape the shadow of the one-legged pirate with the parrot on his shoulder—but typecast though he was, you can still see that he enjoyed the role even while repeating it. Newton died from alcohol-related heart failure in 1956, and his ashes were buried at sea in the English Channel off Cornwall: “Ahr-men.”

On November 22, 1718, Edward Teach, the notorious pirate known as Blackbeard, was killed on his ship the Adventure during a fierce boarding action led by Royal Navy Lieutenant Robert Maynard. By the time he was brought down, Blackbeard had been shot five times and suffered twenty wounds from edged weapons. For the most famous image depicting this event, look no further than the painting by Jean Leon Gerome Ferris on the cover of your editor’s Big Book of Swashbuckling Adventure anthology.

Blackbeard’s career and death are also depicted in this film, in which Lt. Maynard, ordered to Port Royale in pursuit of Henry Morgan and the loot from the sack of Panama … wait, what? Whoa, this story is set in the 1670s, before Ned Teach and Rob Maynard were even born. In fact, this entire moving picture is nought but a tissue of lies! Avast! Bloody pirates—they’ll steal half a century right out from under you if you so much as look the wrong way.

History failure notwithstanding, this was one of the most popular pirate movies of the Fifties, thanks mainly to Robert Newton’s unhinged and completely over-the-top performance as Blackbeard. Newton took all the mannerisms and speech patterns he’d developed for the role of Long John Silver in Treasure Island and cranked them up to eleven, frequently veering into farce and self-parody, but was no less entertaining because of that. (So many “Ahr”s!) Unfortunately, the rest of the film doesn’t hold up so well. The plot is sadly muddled, starting out with Maynard undercover chasing Morgan (Torin Thatcher) but captured by Blackbeard, along with Edwina, a pirate-captain’s daughter who’s secretly stolen Morgan’s treasure, all four of them blundering about loudly at cross-purposes, and it never really gets sorted out. Characters’ motives change suddenly from scene to scene, people stranded on islands show up back in port without explanation, and even the big ship-to-ship showdown between Blackbeard and Morgan ends in an unsatisfying draw. It’s a mess.

One could overlook the ham-handed story if the performances supporting Newton were entertaining, but the rest of the cast is just bland and forgettable. Worst is Keith Andes, who plays Maynard, the English naval lieutenant and ostensible protagonist, exactly as if he were a tough-talking New York district attorney going up against the mob—imagine a slim Peter Graves but with no sense of humor. We’re supposed to root for this guy against Blackbeard and the other pirates, but it’s flat-out impossible. His intermittent romance with Edwina (Linda Darnell) is likewise arid and unconvincing, no matter how hard Darnell tries to look adoringly at him. Yeah, no.

At least there’s a lot of action, solidly directed by Raoul Walsh; the cutlass duels in particular are quite good. The shipboard scenes are also decent, with the quarters below decks properly close and cramped, including visits to the lazaret and the orlop (or, as Newton calls it, “the ahr-lop”). And Blackbeard’s crew are as filthy and repulsive a set of brutes as you’re likely to see in the otherwise over-tidy Fifties, so bonus points for that. But you won’t be able to swallow the story unless you swallow a stiff rum or three first. 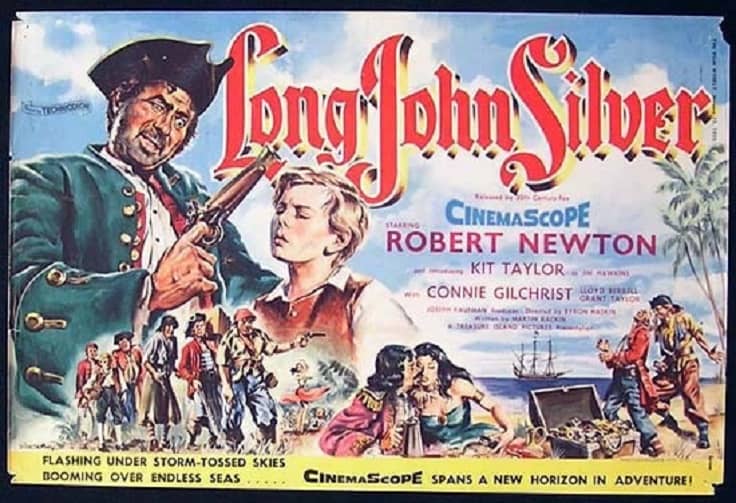 Sure, it’s cheap, and it’s cheesy, but this film’s just chock-full of pirate-y goodness, and pirate-movie fans owe it to themselves to dig up a copy.

How did this thing even happen? Well, back in 1950, Disney made a new version of Treasure Island, which Walt thought was pretty clever because it was a beloved property that was in the public domain, so he didn’t have to pay for it. Jump forward three years and Byron Haskin, who’d directed Treasure Island for Disney, realizes that because the source is public domain, Disney can’t stop him from shooting a sequel to it. (This is a lesson Disney will never forget.) Haskin contacts Robert Newton, who’d made such an impression as Silver in the Disney version; Newton, who hadn’t handled Hollywood success very well, has fled back to England to escape his debts, so he’s happy to do it. Haskin proposes shooting on the cheap in Australia, where he’d made His Majesty O’Keefe the year before, Newton agrees, and Bob’s-your-uncle!

The winning formula for this production is to recycle elements from Treasure Island, but add more pirates and lots more Long John Silver—Newton, in high form, is in almost every scene. The first third of the movie is set in and around Porto Bello, which is inexplicably under British rule. (The Brits sacked it four times, but never governed it.) Silver hangs out there in a low dive with a crew of sea dogs, and it’s immediately established that, though glib and plausible, he’s just as big a scoundrel as ever. (Huzzah!) All he needs is an opportunity, and it comes when another pirate crew, led by a Captain Mendoza, kidnaps the Governor’s daughter. (It’s a genre rule that if the Governor has a daughter, pirates will kidnap her.)

Silver knows Mendoza, and he persuades the Governor to let him handle the ransom transfer. He then performs a double-double-cross, retrieving both daughter and ransom money while plundering the Governor’s warehouse and blaming it on Mendoza. Not-so-incidentally, he also liberates young Jim Hawkins (Treasure Island’s protagonist, played adequately here by Kit Taylor), who should have been enjoying his newfound wealth back in England but for some unexplained reason was serving as Mendoza’s enslaved cabin boy.

McGuffin time! Jim, who’s still “smart as paint” (requotes from Island are common), has a medallion that holds the key to the location of a second hoard hidden on Treasure Island. The movie veers briefly into farce as Silver tries to trick Jim into giving him the medallion while avoiding being maneuvered into wedlock by the proprietress of his low dive, but soon Jim, Silver, Mendoza, and two scurvy pirate crews are off across the Caribbean to dig up Cap’n Flint’s second treasure. The last half of the film shamelessly plunders and recombines elements of Treasure Island, unburdened this time by any tiresome good guys except for Jim. It’s a real scoundrel-fest, sudden reversals are the order of the day, and “those who died are the lucky ones.” I won’t reveal how it ends except to say the finale hinges on two words: doubloon grenades!

One caveat: it seems there’s no good restored version of this film available digitally: all the prints floating around are pan-and-scan, and most of them are in terrible shape. Ye be warned! 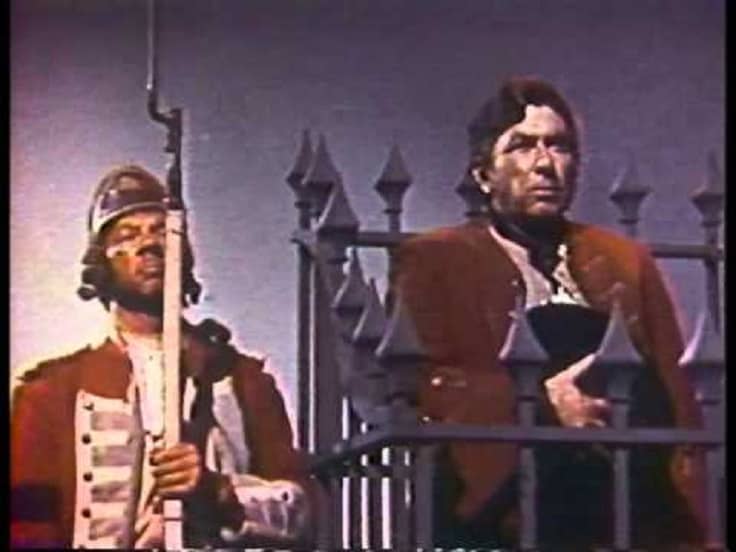 The Adventures of Long John Silver

After the completion of 1954’s Long John Silver feature, despite the fact that the film had a lukewarm reception at the box office, director Byron Haskin formed Treasure Island Productions and the cast and crew stayed in Australia to film twenty-six half-hour episodes of this TV show. Unusually, it was filmed in color, though color broadcasting was still a rare thing in the mid-Fifties. Shortly after the series debuted in the USA, its star, Robert Newton, died at the age of fifty from alcoholism after returning to Hollywood for his final role in Around the World in 80 Days.

Newton’s undeniable charisma notwithstanding, this show should’ve been scuttled at the wharf. It’s unable to settle on a tone, veering from serious pirate drama one week to broad situation comedy the next, as Purity Pinker (Connie Gilchrist), the proprietress of the Cask and Anchor, tries to dry-dock Long John into matrimony. Half the time Silver is the rapacious scoundrel he is in the films, and half the time he’s semi-reformed and just sort of a con man, no worse or more ill-intentioned than Sgt. Bilko. Color film notwithstanding, the production values are low, the acting is weak, the dialogue is worse, and having a pint-size pirate with a hook in Silver’s crew isn’t even enough to save it. These be shoal waters, mates—steer clear.

Another Cinema of Swords? Yippee!

I enjoyed Robert Newton in the original Treasure Island and in Blackbeard the Pirate, but I never knew about these other works. I’ll have to look them up.