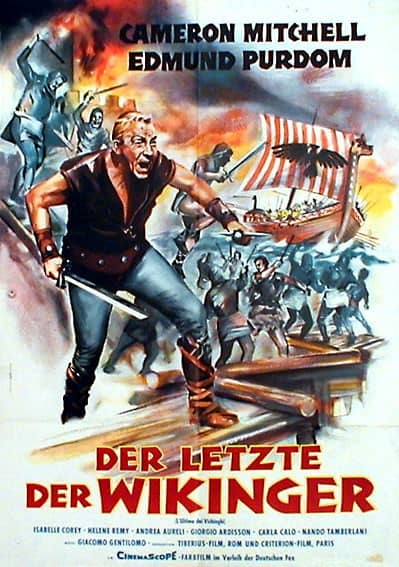 The blockbuster success of 1958’s The Vikings spawned a number of would-be successors that tried to make up for lower budgets by amping up the action. The ever-lurid Italian cinema took the lead with two adventures directed or co-directed by Mario Bava, Last of the Vikings and Erik the Conqueror, but the UK was right behind with their own over-the-top Viking saga, The Long Ships. You can call these guilty pleasures if you like, but that doesn’t stop them from being thoroughly enjoyable. Form shield wall, Vikings, and prepare for attack!

Last of the Vikings

This is a solid Viking adventure film, a cut above most Italian action movies of its day. It stars Cameron Mitchell and George Ardisson as the male Viking leads in parts similar to their roles later in the year in the even better Erik the Conqueror. The film opens with a sea battle, after which Harald (Mitchell) and his brother Guntar (Ardisson) return to Norway after ten years of sea roving, only to find that all the free Viking chieftains have been crushed under the heel of Bad King Sveno (Edmund Purdom, Sword of Freedom) — who, to add insult to injury, has adopted the effete ways of civilized Europe. Harald vows vengeance, because that’s what Vikings do, and begins gathering the surviving warriors under his banner.

Meanwhile, Bad King Sveno, smug in his impregnable castle, is plotting to marry his niece Hilde (Isabelle Corey) to the King of Denmark in return for enough troops to exterminate the remaining Viking holdouts. Purdom as the sneering Sveno overacts atrociously, aiming for Olivier as Richard III but winding up closer to Snidely Whiplash. He’s so terrible you can hardly wait for Harald to take him down.

Director Gentilomo does an adequate job of keeping things moving, and is reputed to have been assisted by Mario Bava (who so memorably directed Erik the Conqueror) in an uncredited role. There’s no convincing evidence of Bava’s distinctive style until the movie reaches its final apocalyptic battle, but that has Bava’s fingerprints all over it: inspired compositions, quick cuts, acute camera angles, and shocking violence building to a triumphant climax. And Bad King Sveno dies horribly. Vengeance accomplished!

A devotee of Sixties cinema might wonder, What if Italian director Mario Bava, the master of stylish horror films, had shot a remake of the 1958 epic The Vikings? Fortunately, we don’t have to wonder, because Bava did exactly that! Erik the Conqueror is a loose remake, but it does follow the major plot points of its predecessor: after sea rovers raid the coast of Britain, two sons of a Viking warlord grow to manhood, one Norse and one English, to oppose each other in a clash both personal and cultural, culminating in a Viking assault on a British castle. However, there are significant variations on the theme, as the English son Erik (George Ardisson) isn’t enslaved by the Norse Eron (Cameron Mitchell), and instead of the brothers competing for the affections on one curvaceous blonde, Bava gives them two, Daya and Rama, a pair of Nordic “Vestal Virgins” played by the Kessler twins, Alice and Ellen.

That’s really just the start of the variations, because Bava’s approach to filmmaking couldn’t be more different from that of The Vikings’ Richard Fleischer. Where the earlier film is grand, expansive, yet grounded in its sweeping scenery, Erik is lurid, sensationalistic, and fanciful, filmed in bold primary colors and daring camera angles, every scene limned in smoke, flame, and blood.

Bava’s film makes no pretense to historical accuracy, as you might guess from the Vestal Virgins mentioned above: mounted knights thunder to the attack bearing crimson lances thick as logs, cartoonish longships have their steering rudders on the wrong sides, and tarantulas infest Scottish dungeons. And the costumes! Holy hell! In fact, in all but its lack of overt supernatural elements, this is a fantasy film, a fever dream in which Nordic maidens swirl in a sword dance under a titanic purple Yggdrasil before blond barbarians fight a savage duel wielding glowing red-hot axes. Wow!

This movie has the best ridiculous medieval combat ever, and there’s plenty of it. Bava’s direction for the fight scenes appears to have amounted to, “Just go wild!”, as scores of seemingly untrained extras chop vigorously at each other with swords, axes, spears, and torches while screaming and howling. This is an approach that’s failed in countless low budget hacktaculars, but Bava makes it work. It may be overwrought but it’s effective, and Erik’s final siege and sacking is just as exciting as the classic castle assault in The Vikings. The whole thing is a delirious and utterly unrestrained extravaganza.

Also known as The Vikings, Jr., in which Kirk Douglas and Tony Curtis are traded for Richard Widmark and Russ Tamblyn — by no means an even trade, but we do get Oscar Homolka in exchange for Ernest Borgnine, and that almost makes up for it.

This film is 126 minutes of glorious nonsense, not even slightly credible but delivered with such reckless, deadpan glee that it just doesn’t matter. Though theoretically based on a respected historical novel by Frans Bengtsson, the story is pure pulp: legend tells how Byzantine monks collected an unholy quantity of gold and cast it in the form of a great bell, “The Mother of Voices,” solid gold and three times the height of a man. Moorish prince Aly Mansuh (Sidney Poitier) is obsessed with finding this bell, and when Rolfe (Richard Widmark), a shipwrecked Norseman, is heard telling a tale about the bell in the marketplace of Mansuh’s Barbary Coast town, the prince has him arrested and threatened with torture unless he tells what he knows. But Rolfe escapes by leaping out a window into the sea, and then apparently swims from the Mediterranean to Norway, because the next time we see him he’s climbing out of the water in the fjord of King Harald Bluetooth’s seacoast town. I am not making this up.

Harald has just taken delivery of the finest longship ever made by his shipbuilding thane Krok (Oscar Homolka, in a deliriously unhinged performance), who is also the father of Rolfe and his brother Orm (Russ Tamblyn, athletic but terrible). Rolfe has ruined Krok’s fortunes by losing his ship and crew in a storm, but he begs his father for another ship, because of course the legend of the golden bell is true; Rolfe heard it tolling while his ship was breaking up. With Krok’s connivance, Rolfe and Orm rustle up a crew and steal Harald’s new drakkar, abducting Harald’s daughter Gerda (Beba Lončar) as a hostage for Rolfe and love interest for Orm. Hostage or no, Harald sets out in pursuit with a whole Viking flotilla.

This is an Irving Allen production, so Rolfe’s longship sails into a howling maelstrom for some vintage just-too-cheesy-to-be-convincing special effects, and then wrecks on the Barbary shore. It’s at this point that Jack Cardiff’s direction, which has been perfunctory, suddenly becomes sharp and on point — literally so as the shipwrecked Viking crew is attacked by a troop of Moorish cavalry. In a thrilling fight, the Norsemen defend their position with a reasonable facsimile of authentic Viking tactics and kick the cavalry’s collective ass. It’s the best scene in the picture, though the Norsemen’s victory is short-lived as the cavalry comes back in overwhelming numbers and the Vikings are taken prisoner.

It was Aly Mansuh’s cavalry, of course, he’s still determined to find the Mother of Voices, and the next thirty minutes are a dance of negotiations at scimitar point between various factions among the Moors and Vikings, all vying for the upper hand. This is where we find one of the film’s most striking and lurid visuals, the Steel Mare, a giant scimitar-blade fun slide that splits a man in two when he takes the Mare for a ride. Oog! Rolfe is threatened with just such a ride, but at the last minute a deal is cut whereby all parties can go together to find and bring back the great golden bell. And do they find it? What, are you serious? Of course they do, but it’s just the beginning of the climactic shenanigans.

Beware: at one point the Viking crew gets loose in Aly Mansuh’s palace, stumbles on the prince’s harem, and the Nordic barbarians go lust-mad and assault the concubines with evil intent. It’s attempted rape played for laughs, but it isn’t the least bit funny. Just wince, shake your head, and be glad it’s no longer 1964. Yeesh.

The Long Ships is one of those movies that I initially saw on TV one summer when visiting my grandparents in California, and I had NO IDEA what it was; but the Steel Mare was pretty much graven in my memory until, many years later, I was finally able to identify the name of the film I was remembering.

Another Ellsworth’s Cinema of Swords? YES!

I’ve never seen the two Italian Viking movies and that is something that I need to remedy soonest. But The Long Ships? There was a time in my teens when I thought this was one of the greatest movies ever made, it’s just that nuts. And don’t think that you need to read the book to understand the movie; the only thing the two have in common is a character named Orm.

It looks like everyone making this film was having a ball and Beba Loncar and Rosanna Schiaffino are gorgeous. Watch it at least once if only to see what the Mare of Steel is.

The Long Ships is great fun will have to check out the others especially the one done by Bava. Love this column!