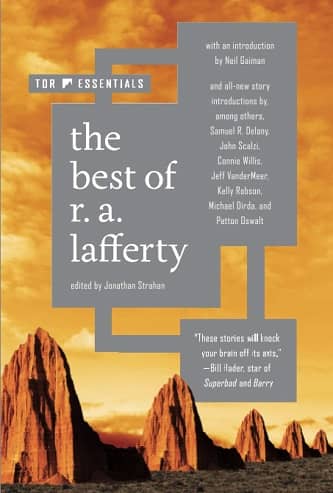 Two years ago, when The Best of R.A. Lafferty was published by Gollancz SF Masterworks, I wrote an excited New Treasures article that began like this:

Fabulous! Lafferty is one of my favorite short story writers, and far too much of his work — virtually all of it, really — is either long out of print, or available only in very expensive collector’s editions from Centipede Press. The prospect of a generous collection of his best short fiction in a compact and affordable trade paperback edition… seemed too good to be true.

It almost was. The Gollancz edition was very hard to acquire in the US (and it still is). Fortunately Tor Books saw fit to reprint the book as part of their own Tor Essentials line earlier this month, and it’s now widely available in a handsome and affordable trade paperback edition. Here’s the publisher’s description.

Acclaimed as one of the most original voices in modern literature, a winner of the World Fantasy Award for lifetime achievement, Raphael Aloysius Lafferty (1914-2002) was an American original, a teller of acute, indescribably loopy tall tales whose work has been compared to that of Avram Davidson, Flannery O’Connor, Flann O’Brien, and Gene Wolfe.

The Best of R. A. Lafferty presents 22 of his best flights of offbeat imagination, ranging from classics like “Nine Hundred Grandmothers” and “The Primary Education of the Cameroi” to his Hugo Award-winning “Eurema’s Dam.”

This is a joyous, wonderful, and wholly surprising book that belongs in the collection of every serious science fiction reader. Here the complete Table of Contents.

You know I bought this collection even though I had all the stories in other collections. It’s just so rare for anything to come out by Lafferty that I felt I had to support it. Lafferty is truly a unique writer who doesn’t get as much attention as he deserves.

Coincidentally appropriate, the first Lafferty story that I recall reading was “Slow Tuesday Night”, and it still may be my favorite Lafferty. I shall have to read this lovely collection and gain on my recollection of his surreal and circumspect worlds and words.

Want to review it for us, Keith?

> I bought this collection even though I had all the stories in other collections. It’s
> just so rare for anything to come out by Lafferty that I felt I had to support it.

I’m right there with you. I have the Gollancz Masterworks edition, but I added this one to my Amazon cart as soon as I spotted it. If we don’t want Lafferty to be forgotten, it’s up to us to support the publishers who publish him.

> the first Lafferty story that I recall reading was “Slow Tuesday Night”, and it still may be my favorite

The first Laffery I recall reading was “Nine Hundred Grandmothers,” and it is definitely my favorite. A short story that has lingered in my brain for over 30 years!

I’d buy it at my local Barnes and Noble, however, according to their website, not a single store in Connecticut is carrying it in stock (which is typical for B&N and most new SF these days). Amazon it is…

Twice in one week! Book ordered based on your recc, John. (I’ve read a bit of Lafferty; looking forward to reading much more.)

Things for Black Gate to do: