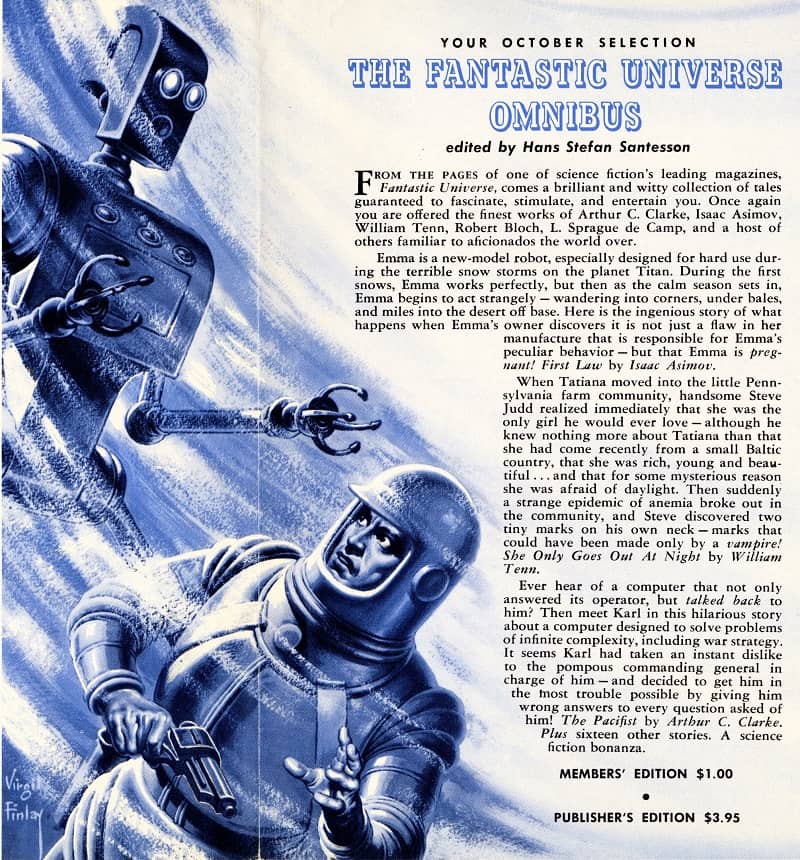 The Fantastic Universe Omnibus, featured in the
September-October 1960 issue of Things to Come. Art by Virgil Finlay

As I mentioned in Part One of this series, like tens of thousands of science fiction fans before and after me, I was at one time a member of the Science Fiction Book Club (or SFBC for short). I joined just as I entered my teen years, in the fall of 1976.

The bulletin of the SFBC, Things to Come, which announced the featured selections available and alternates, sometimes just reproduced the dust jacket art for the books in question. However, in many cases the art was created solely for the bulletin, and was not used in the book or anywhere else. Nearly all of the art for the first 20 years of Things to Come is exclusive to that bulletin, and as a result hasn’t been seen by many SF fans. In this series, I’ll reproduce some of that art, chosen by virtue of the art, the story that it illustrates or the author of the story. The first installment featured art from 1957 and earlier, while this installment covers 1958-1960, presented chronologically. 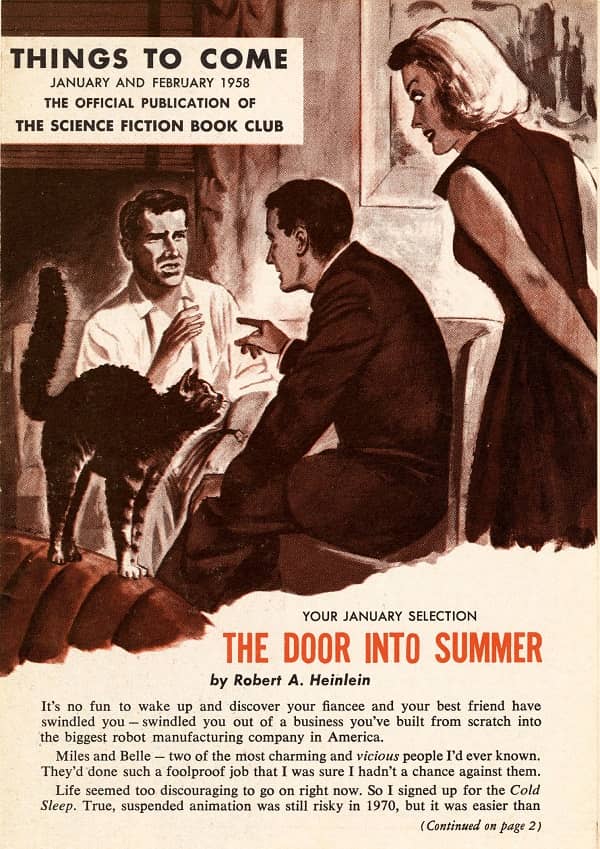 The Door into Summer (Things to Come, January-February 1958)

I’ll kick off our review with The Door into Summer by Robert A. Heinlein, from the January-February 1958 issue of Things to Come. As I’d noted in the first installment, the artists who contributed to these early bulletins are usually unidentified. That’s the case here. Mel Hunter did the dust jacket art, but this piece is not by him; the artist did sign the work, just above the couch, but the signature is illegible. 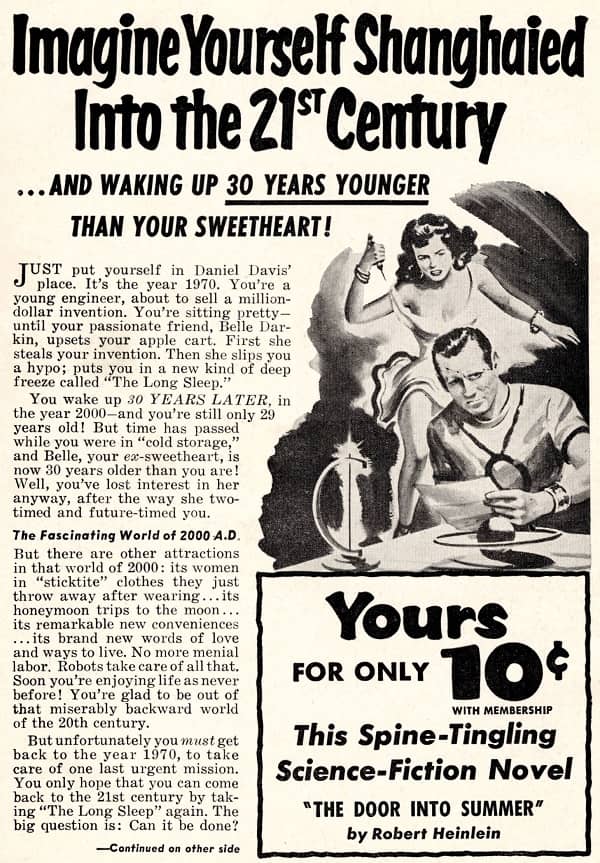 The SFBC ad on the back cover of Astounding Science Fiction, February 1958

The SFBC regularly took out ads that appeared in the SF digests. These usually just depicted the jackets of the books as published, but sometimes they featured specially commissioned art that appeared in neither the book nor Things to Come. I’ll show one example of that here, with this ad showcasing The Door into Summer taken from the back cover of Astounding Science Fiction, February 1958. 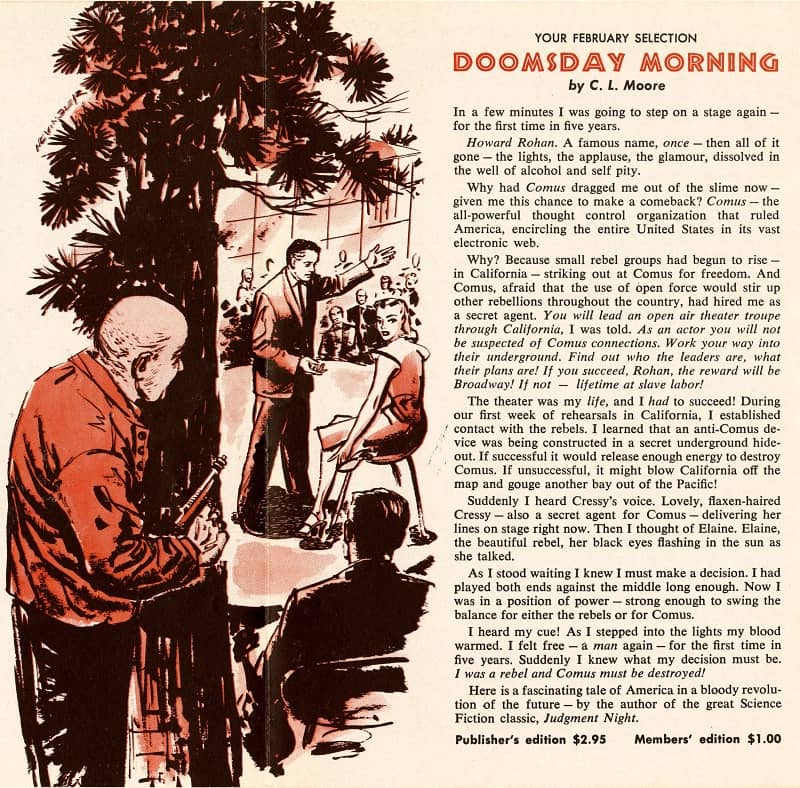 Next up, from the same issue, is Doomsday Morning by the great C.L. Moore. As the February selection, Moore’s novel got the inside of the bulletin, allowing for more of a double-page spread feel (though usually it was 1.5 page spread). This was only the second selection by a female author in the history of the SFBC, following The Long Tomorrow by Leigh Brackett (January-February 1956), although Judith Merril was present in the March-April 1955 issue as an editor. 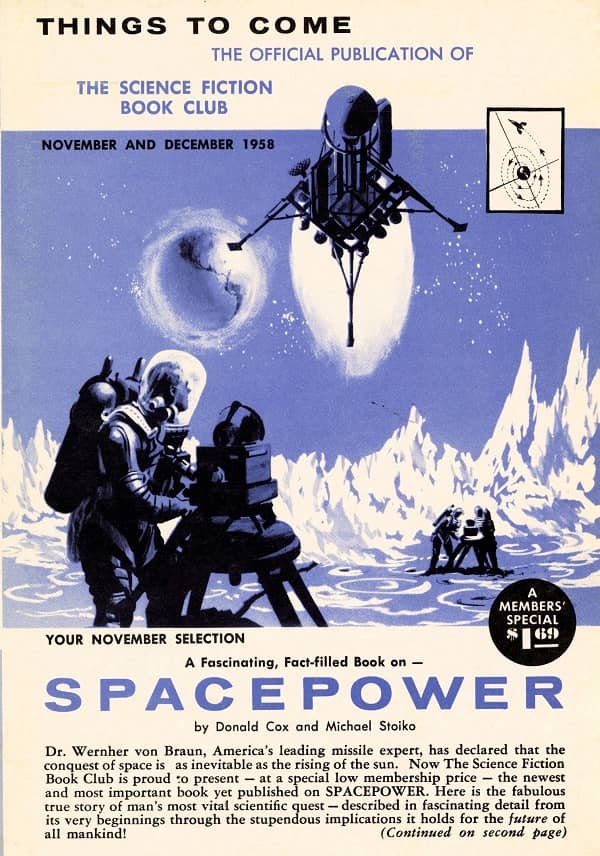 Our next selection, Spacepower by Donald Cox and Michael Stoiko, from the November-December 1958 issue, is a rarity for the SFBC. It’s not science fiction at all, but is a true account of spaceflight through the then-modern day. 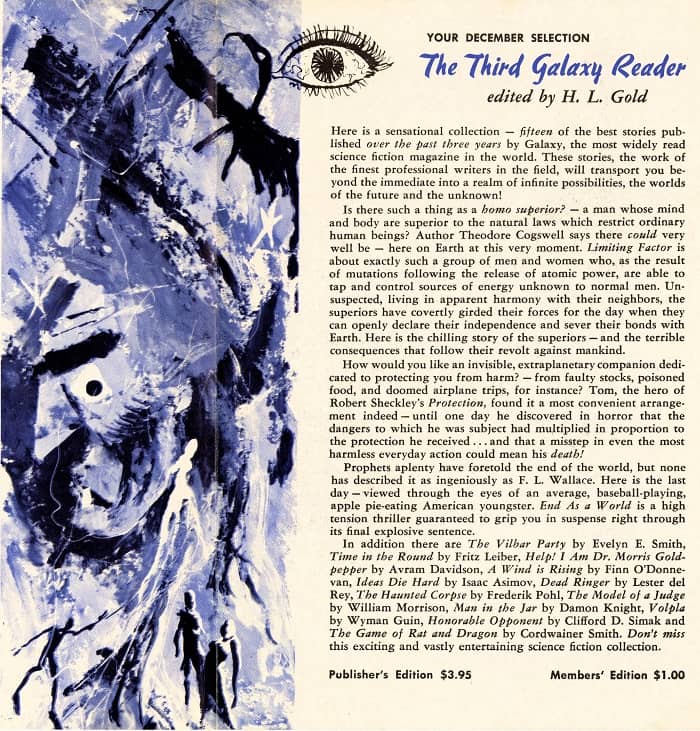 The SFBC often made “Best Of” collections available, and the November-December 1959 issue did just that with The Third Galaxy Reader by H.L. Gold. Although the artist is still unidentified, his or her style clearly shows the influence of artist Richard Powers, who was a major figure in science fiction illustration at this time. 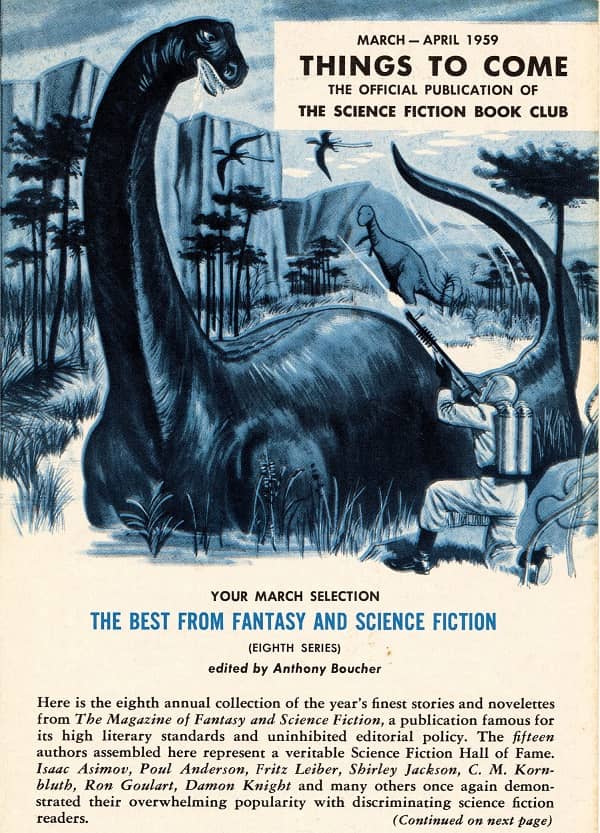 The Best from Fantasy and Science Fiction (Eighth Series), from Things to Come (March-April 1959)

Another “Best Of” makes its appearance in the March-April 1959 issue. This time it’s Anthony Boucher editing The Best from Fantasy and Science Fiction (Eighth Series). Time-travelling big-game hunters were an old pulp stand-by. 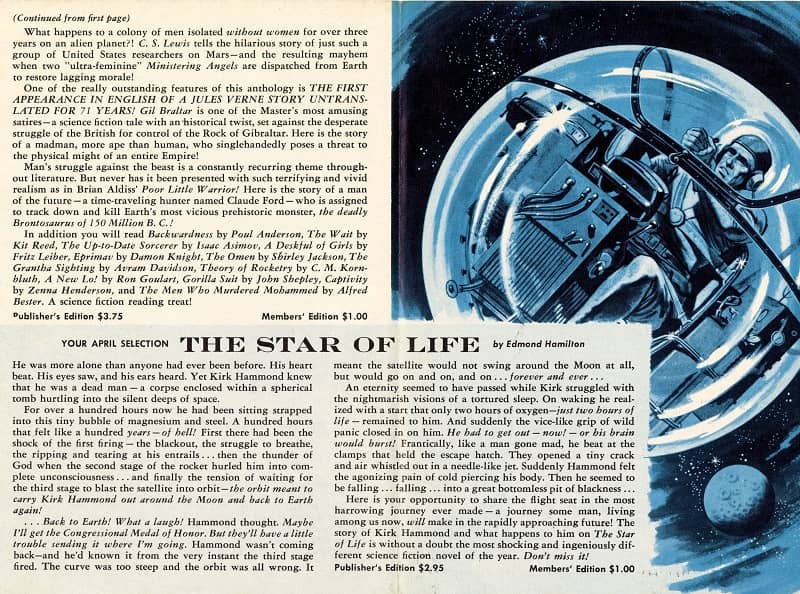 One of the old guard also appears in the March-April 1959 issue. Edmond Hamilton, whose first science fiction story ran way back in 1926, was still a popular author, and his The Star of Life grabs the interior pages of Things to Come. 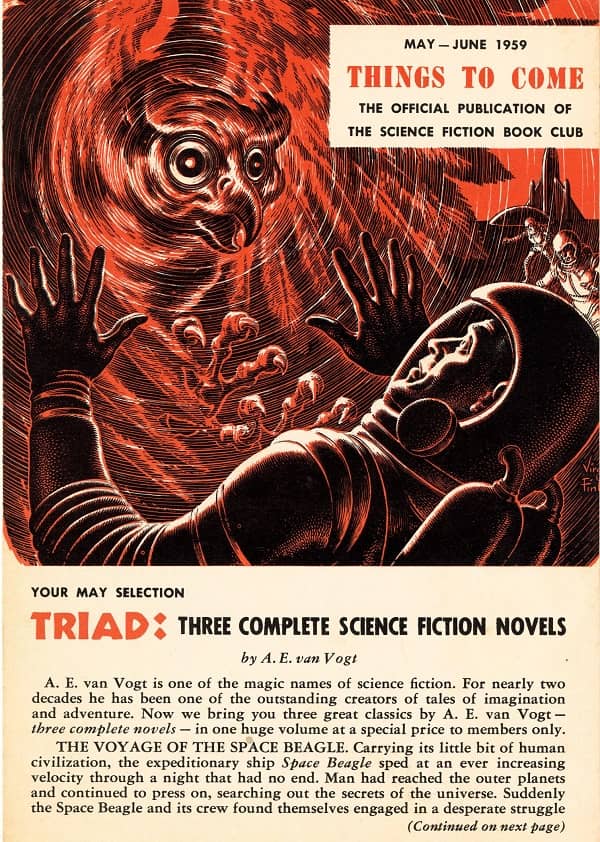 With the May-June 1959 issue, one of the great science fiction artists celebrates his SFBC debut in Things to Come. Virgil Finlay makes an unmistakable entry with both of his pieces for this issue, and he would contribute more than 40 pieces of art to Things to Come over the next decade. 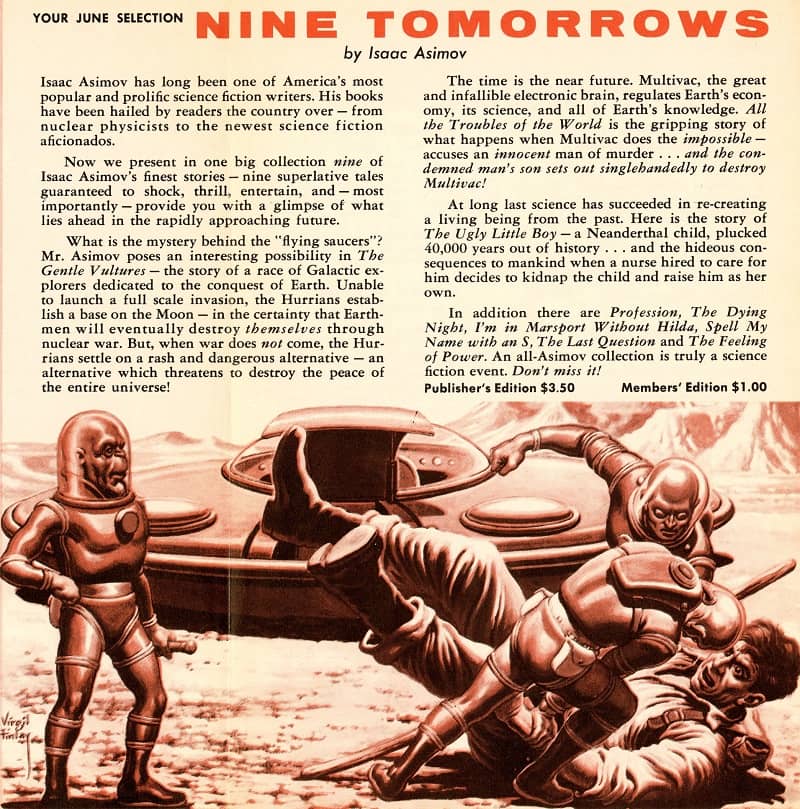 For his initial offerings, Finlay turns his talents to Triad by A.E. van Vogt and Nine Tomorrows by Isaac Asimov. Although he’s not nearly as well remembered today, in the 1940’s van Vogt was considered to be one of the Big Three of Science Fiction (along with Asimov and Heinlein). 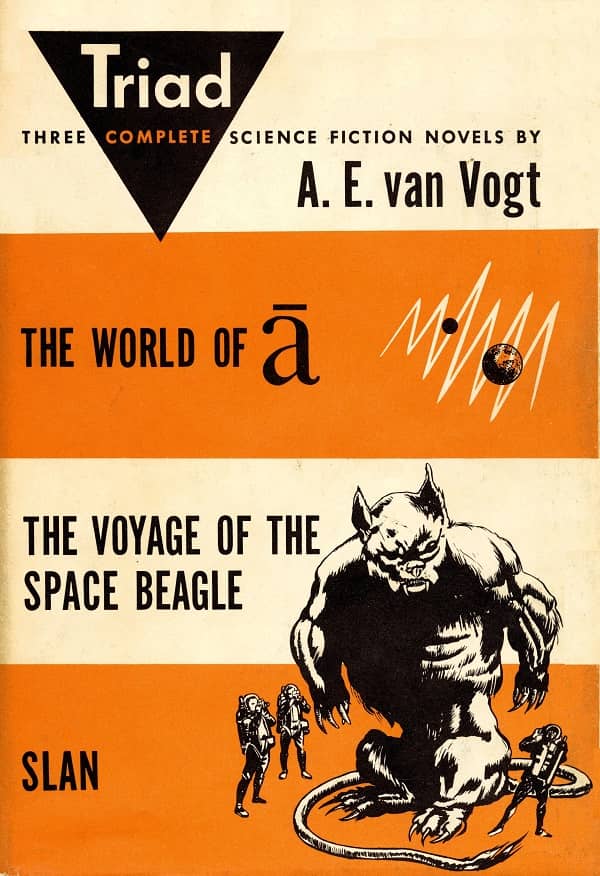 Triad was perhaps the first of the omnibus volumes that the SFBC would become known for – a book collecting several novels published exclusively by the SFBC. Although why they went with an unidentified artist for the cover art (shown here for comparison), rather than using Finlay, I’ll never know. 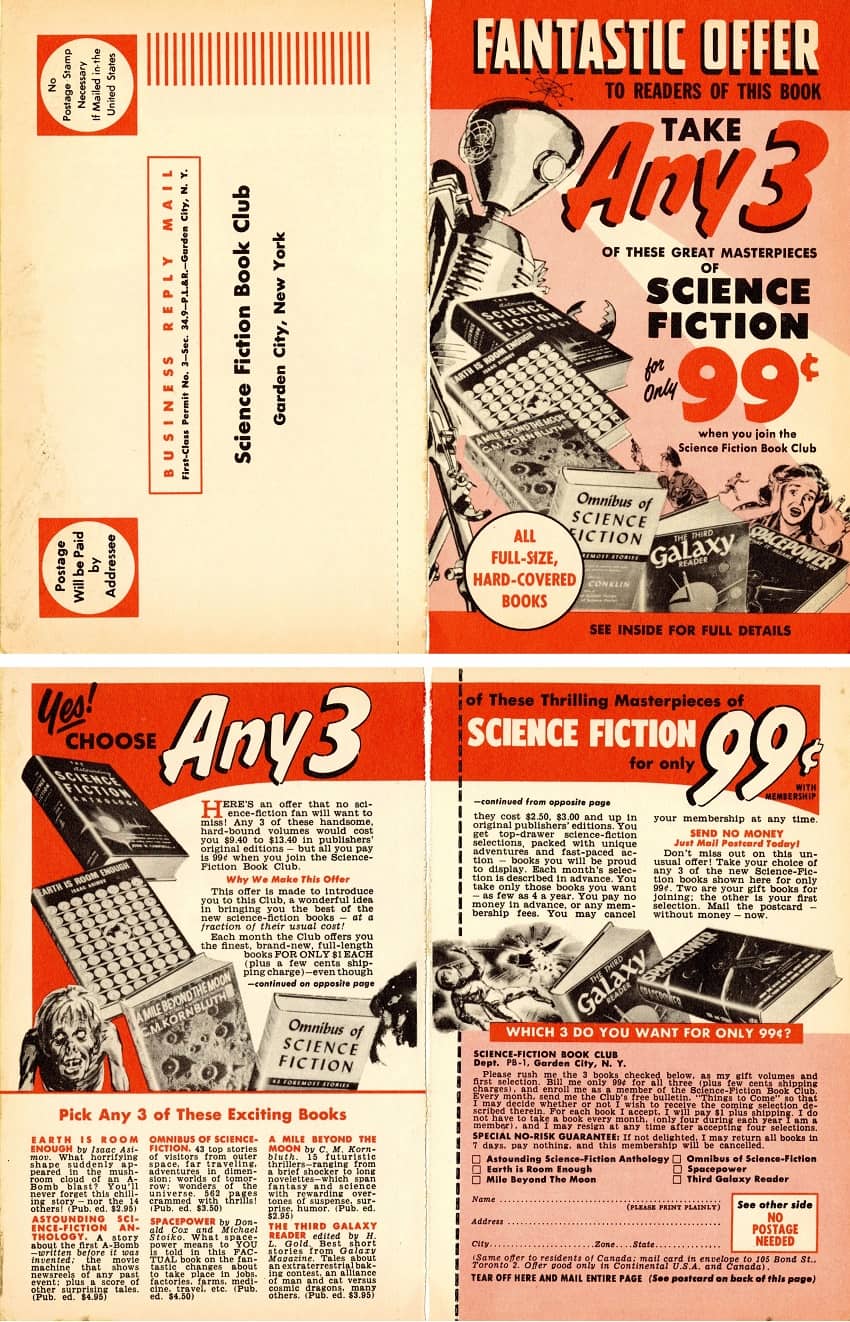 In addition to advertising in the science fiction digests, the SFBC also ran ads in SF paperbacks. These also often featured art that did not appear anywhere else. I thought I’d run one example of these from this period. This appeared in Sands of Mars by Arthur C. Clark, published in June 1959 by Permabooks as M4149. Who doesn’t like giant rampaging robots? 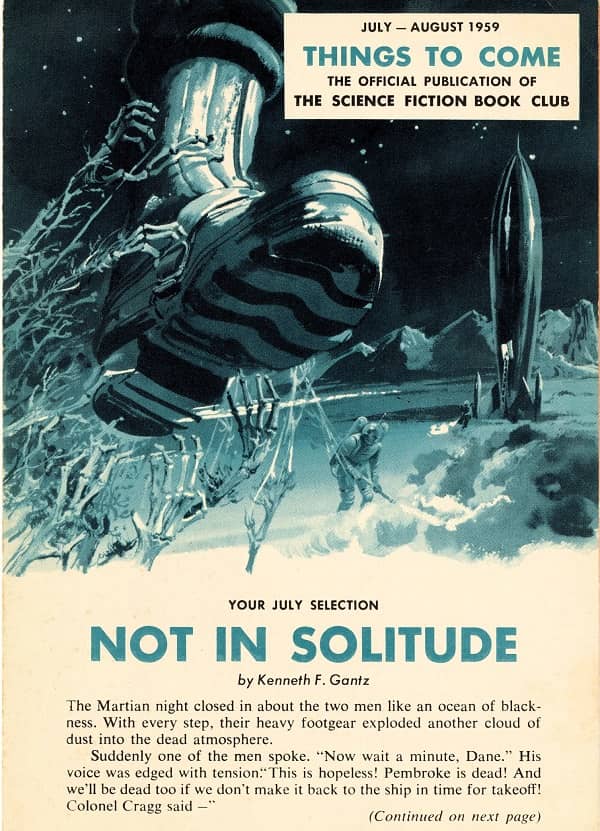 Not in Solitude (Things to Come, July-August 1959)

The July-August 1959 issue of Things to Come offered Not in Solitude by Kenneth F. Gantz. Again the artist is unknown, but it features a classic 1950’s rocketship together with a horror element in the skeletal hands. 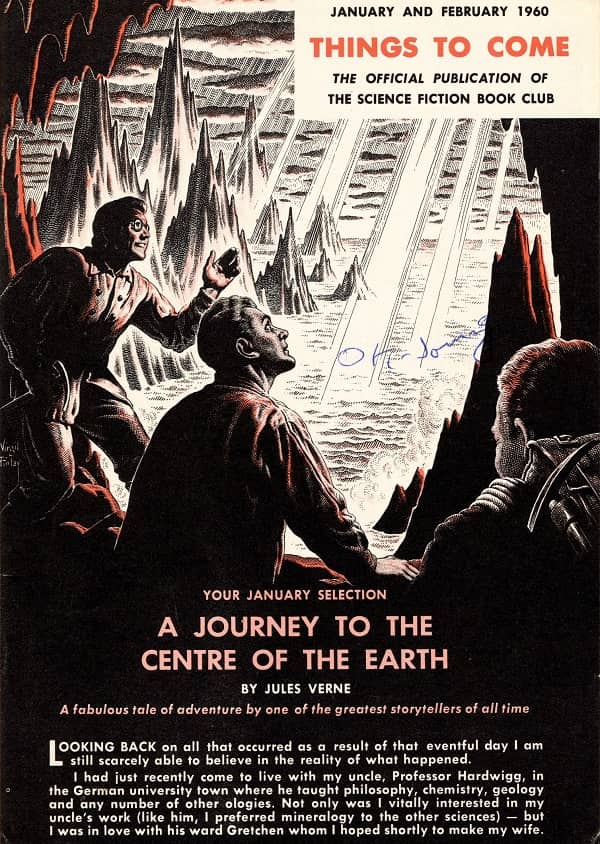 Finlay returns as we enter the decade which would see men walking on the Moon. The January-February 1960 issue features his work for the classic, A Journey to the Centre of the Earth by Jules Verne. His illustration was, in this case, actually used on the dust jacket as well. 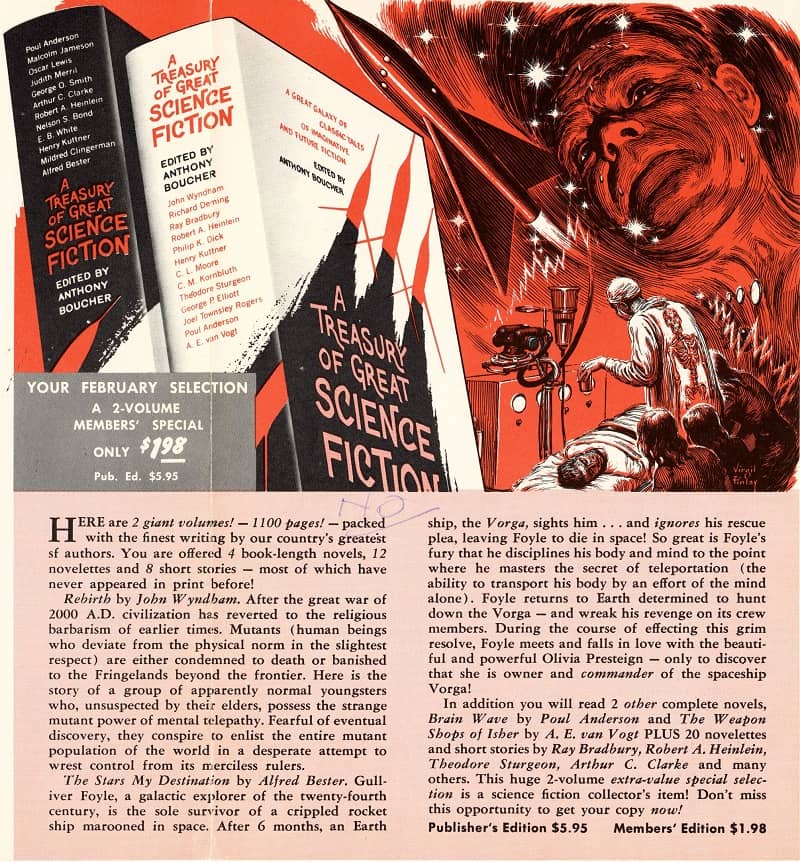 A Treasury of Great Science Fiction in Things to Come, January-February 1960, Art by Finlay

Inside the January-February 1960 issue, the second selection is A Treasury of Great Science Fiction edited by Anthony Boucher. This landmark anthology, in two volumes, would remain available for decades (I picked up a copy shortly after joining the SFBC). This layout is unusual, as it shows both a new Finlay illo together with a depiction of the books. 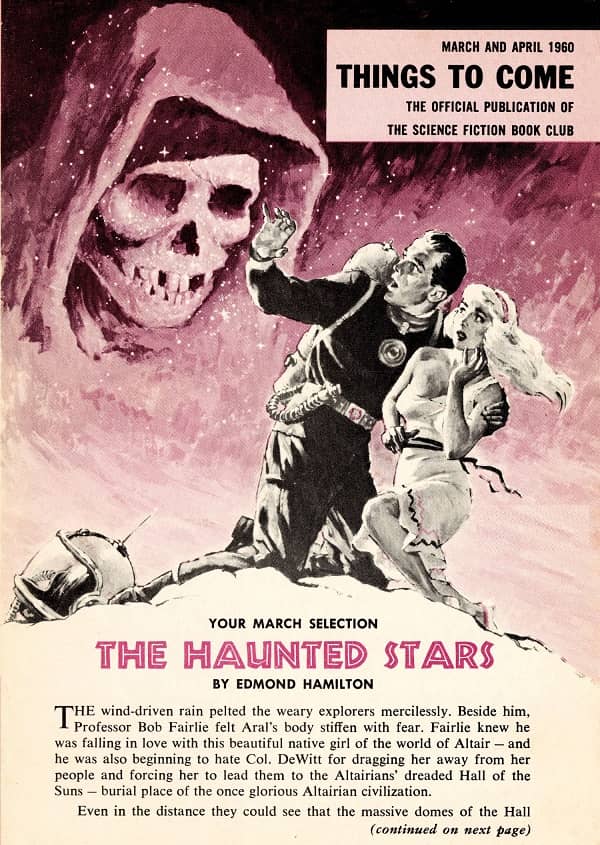 The Haunted Stars in Things to Come, March-April 1960

Edmond Hamilton is back for the March-April 1960 issue, with the novel, The Haunted Stars. As was often the case, the art (by an unidentified artist) used for Things to Come was more vibrant and action-packed than the pedestrian art that appeared on the dust jacket for the book. 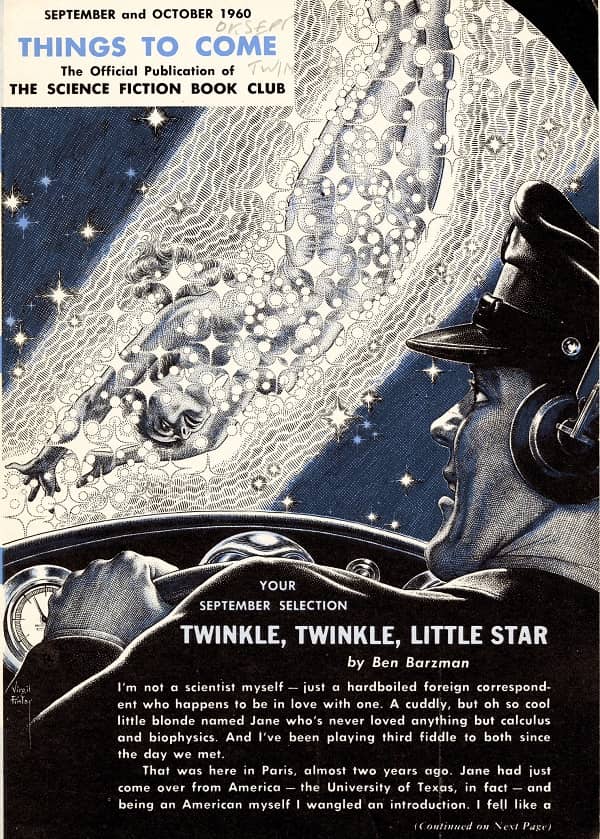 The September-October 1960 issue saw the appearance of two superior pieces by Virgil Finlay. Grabbing the cover was Twinkle, Twinkle, Little Star by Ben Barzman. This appears to be the only SF book that Barzman wrote, but Finlay did it proud with one of his classic “woman in bubbles” illos.

Inside, a robot menaces an astronaut in connection with The Fantastic Universe Omnibus, an anthology edited by Hans Stefan Santesson (see the top of this article). Santesson had been the editor of Fantastic Universe, but the magazine folded after its March 1960 issue. 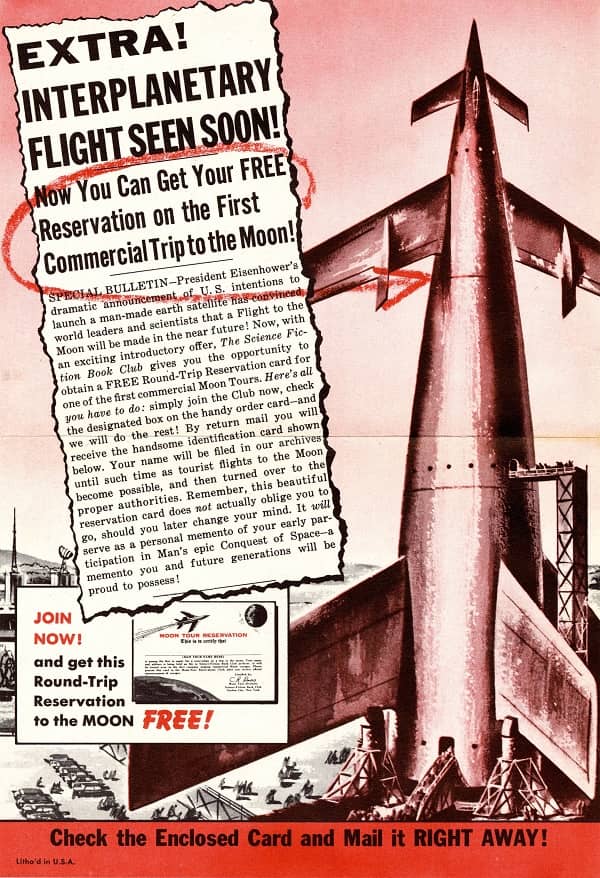 While that September-October 1960 issue will bring to a close our look at Things to Come for this period, don’t go away just yet. We’re moving into overtime with a SFBC bonus! 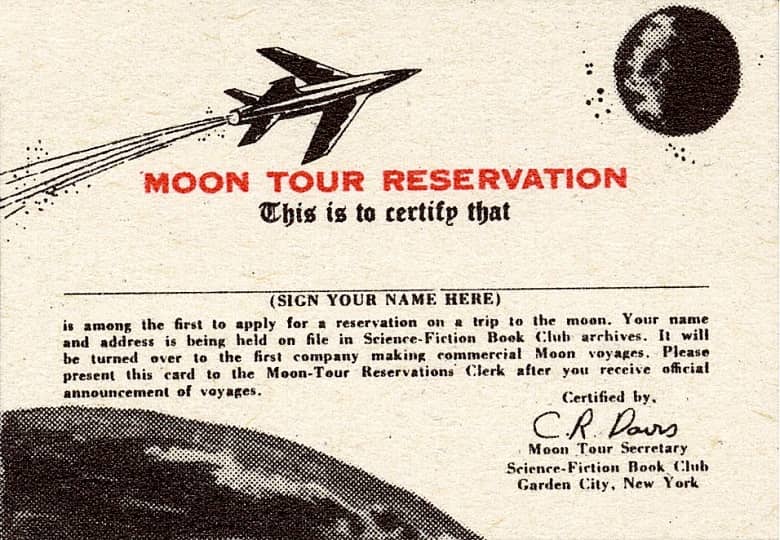 In addition to the book deals the SFBC offered to entice new members to join, they also occasionally offered non-book incentives as well. One of the more interesting of these was a promotion they offered to members starting in 1954, but which continued up until the end of the decade. This was an opportunity to get a free reservation on the first commercial trip to the Moon! 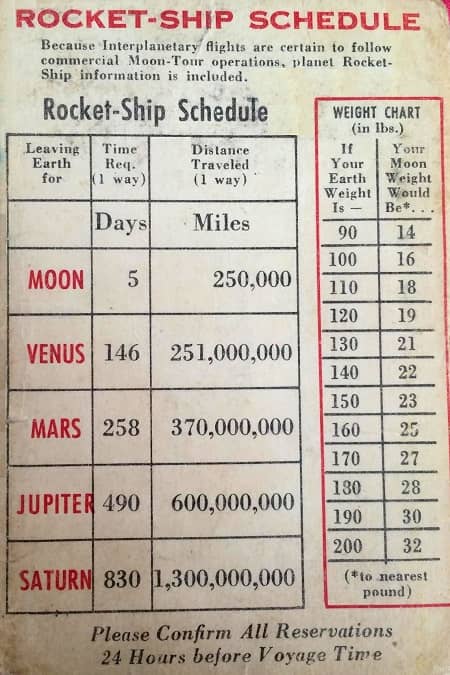 Back side of the Moon Tour reservation card

Yes, if you joined the SFBC (though sometimes you also had to take their equivalent of the SAT, the Lunar Quiz), you could be headed to the Moon! What this entitled you to was an identification card, certifying as to your Moon Tour Reservation, which contained nifty space flight info on the back! 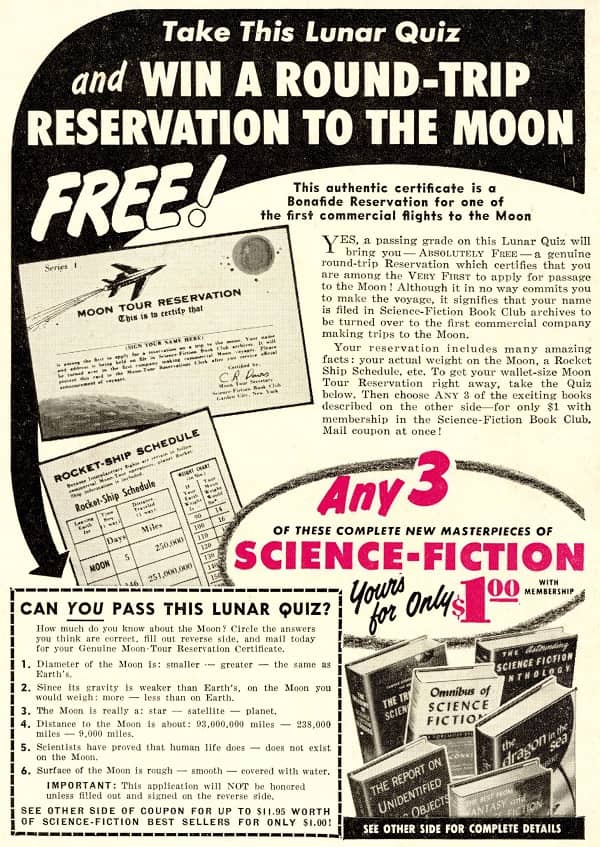 The SFBC promised that, “Your name will be filed in our archives until such time as tourist flights to the Moon become possible, and then turned over to the proper authorities.” I wonder if those archives have been properly maintained, and if so, whether they’ll eventually be turned over to Elon Musk. 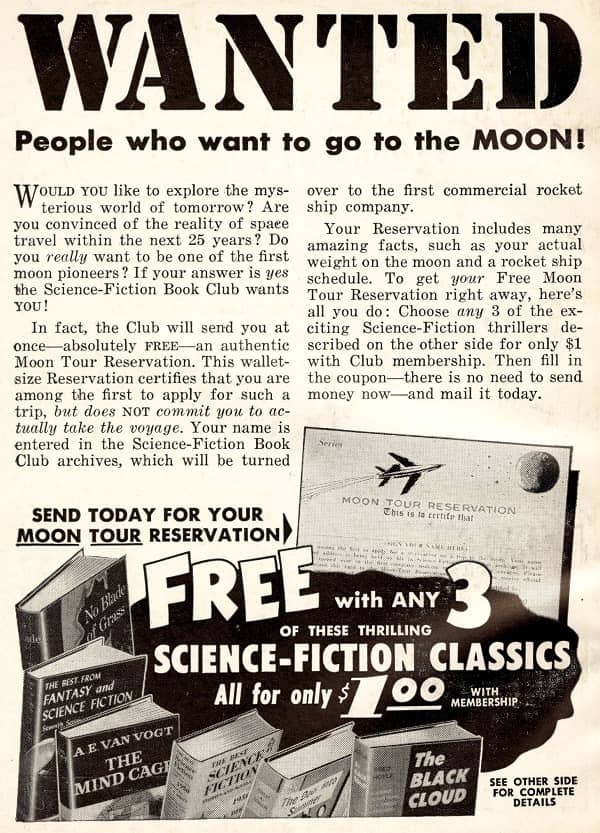 Sadly, I don’t possess one of those ID cards. But through the magic of the internet, I was able to find a few images of them that I’ll share with you now, together with a flier put out by the SFBC promoting this, as well as ads offering them from the October 1957 issue of If and the November 1958 issue of Space Travel.

In our next installment, I’ll cover Things to Come from 1961 through 1963. Until then (and with a nod to the immortal E.E. “Doc” Smith), “Clear ether, spacehounds!”

These late-1950s SFBC monthly catalogs pre-date my own 1970s membership, but the nostalgia rings strong. I am happily amazed that the issues were preserved all this time so that we can enjoy the artwork and the copy. And, Mr. Ellis, we do enjoy! Continue as you see fit.

Thanks again for doing this Doug I was also a member for quite a few years and I wish I had saved these bulletins.

None of these look familiar. I think I joined the SFBC in 1961 or 62. I still have several of the volumes I bought back then as a teenager, but I sold some others, back when the SFBC editions were looked down on by serious collectors. Of course, me now wonders why me then sold those books…

Looking forward to the next installment.

I also sent the link to this out to a wider audience, including Ellen Asher, retired SFBC editor, who commented that this was before her tenure.

Thanks for posting all these—I really enjoyed looking at them! These ads predate my own SFBC membership but I do own a few of the old magazines where they originally appeared. My students always get a kick out of the “Reserve a Round Trip to the Moon!” ones.

Maybe soon we can reserve that trip — or at least a trip into orbit!