Hammer Films was a London studio founded in 1934, but it didn’t really make much of a mark until the mid-Fifties, when they hit their stride with a revival of the Gothic horror genre. With dependable leads in Peter Cushing, Christopher Lee, and (later) Oliver Reed, they just about owned the horror category from 1955 through 1965 but were successful enough to branch out into other genres as well, including historical swashbucklers, all with that distinctive Hammer look and feel. Let’s take a look at how they did with outlaw rogues, pirates, cavaliers, and roundheads. Batten down the hatches, it’s Christopher Lee in an eyepatch, swabs!

For a low-budget movie made by a small studio just establishing its style — the U.K.’s Hammer Films — this is quite good. The marquee draw is Richard Greene as Robin Hood, coming off his four-season star turn in the same role on the popular Adventures of… TV show; at the time, starring in a feature film, even a modest one, carried far more prestige than even a hit television series, so in some ways this movie is the capstone of Greene’s career. However, this is a standalone Robin Hood movie whose story is unconnected with the show, and none of the other TV cast members appear in it — which is a bit of a shame, because their replacements in the corresponding parts aren’t always better. There’s one conspicuous exception: Hammer stalwart Peter Cushing plays the Sheriff of Nottingham, and his cold, blue stare brings a menace to the role never seen in the TV show. Indeed, the tone of this production is two shades darker than that of the series, grimmer and with higher stakes.

At story’s start Robin is already the benevolent chief of an outlaw band in Sherwood, and unusually, he’s given no backstory — he’s just a good outlaw pursued by a bad sheriff and has yet to meet Marian Fitzwalter or get involved in the affairs of the realm. The story, scripted by Alan Hackney with spare and serviceable dialogue, starts off a bit slowly as we meet Robin, the Sheriff, and Marian (Sarah Branch, pleasant but unmemorable), but it picks right up once it introduces a political intrigue between the unscrupulous Earl of Newark (Richard Pasco) and the honest and upright Hubert Walter, the King’s Chancellor (Jack Gwillim). Fancy archery is a key plot point here, a delight for us traditional fans of the Outlaw of Sherwood, and Robin’s skill with a bow comes to the attention of Newark, who tries to hire him for a mission. Robin plays along until it becomes clear he’s being employed to carry out an assassination, and then suddenly the Sheriff comes along and recognizes him, Robin flees, and for the rest of the film events move quickly.

The production is ably directed by Terence Fisher, taking a break from making a name for himself establishing the Hammer horror brand. I’ll say this for Fisher, he has a sharp eye for composition, and even his simple shots are often beautifully set up. The movie was filmed in the bucolic Irish countryside, which gives it the authentic Merrie Olde England look that California lacks. The costumes, gear, and weaponry are reasonably authentic, the swordplay is credible, and the fights themselves are exciting. Plus, we get the ever-excellent Oliver Reed stealing several scenes in an uncredited bit part as a nasty and arrogant young noble, just a year before his breakout role in Curse of the Werewolf. It was only 1960, but this may be the best Robin Hood movie of its decade: recommended.

The Pirates of Blood River

Adultery and piranhas in the first five minutes — must be a Hammer film! In the 17th century, Huguenots (French Protestants) fleeing persecution founded a secret haven on a tropical island. A hundred years later their Puritanical town elders have become complete jerks, so when their refuge is discovered by a crew of ruthless pirates, it’s impossible to sympathize with them. Plunder and pillage, me lads!

Jonathon Standing (Kerwin Mathews), the son of the mayor, is caught dallying with another elder’s wife, and after the fleeing wife is eaten by piranhas, Jonathon is sentenced to the island’s penal colony by his own father. This brutal prison in a sand quarry contains about as many prisoners as there are residents in the town, so you know the town is not governed by nice guys. Jonathon makes a daring escape but is then captured by a newly arrived pirate crew, who think the Huguenots’ island is just the hideout they’re looking for. But Captain La Roche (Christopher Lee) promises Jonathon the town will be spared if he leads them to the treasure the Huguenots must have brought from France.

Like most Hammer films, this was made on the cheap and on the quick, but with an unrestrained and lurid glee that makes it entertaining despite the low production values. Its chief pleasures are watching buccaneers La Roche and Brocaire (Oliver Reed) sneer and glower piratically at the captive Huguenots while their drunken maties roister and fight with one another. Lee, all in black leather including eyepatch, strides around like he was born with a rapier on his hip. The Huguenots, Mathews included, are earnest but boring, and it’s hard to cheer for them even as their enemies the pirates dissolve into acrimonious anarchy. Come for the piranhas and stay for the blindfolded sword duel. 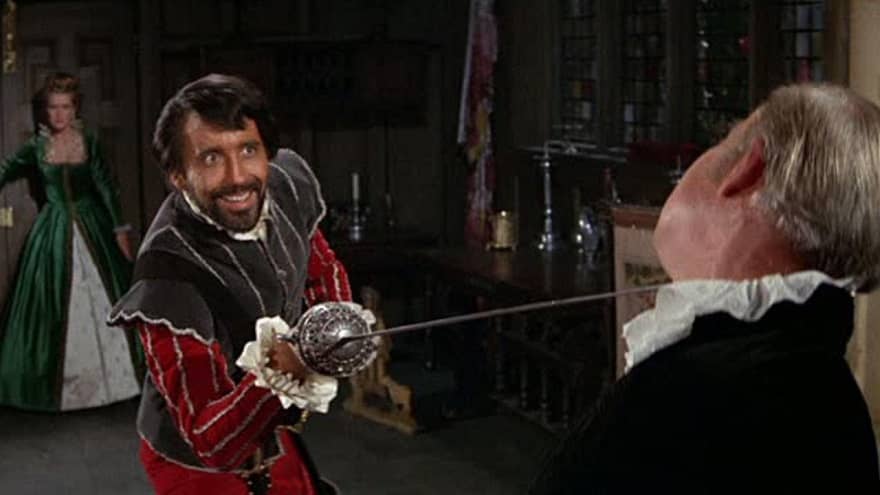 In 1588, after the defeat of the Spanish Armada in the English Channel, the surviving Spanish ships sailed north and then west around the coasts of Scotland and Ireland, making for the open Atlantic and a route back to Spain. As many as two dozen Spanish ships wrecked on the Irish coast; some crews fought their way to rescue by their compatriots, but others were hunted down and killed or captured.

This is another Hammer Films swashbuckler, low-budget and lurid but not to be sneered at. Christopher Lee is top billed as Captain Robeles, skipper of the Diablo, a Spanish privateer that joined the Armada, was badly damaged, and had to put in to a remote marsh on the English coast to make repairs. The Spanish crew, pirates all except for the young officer Don Manuel (Barry Warren), take over a small coastal town and coerce the inhabitants into forced labor to repair the ship before the English militia can arrive. Local lord Sir Basil and the weaselly Vicar Brown counsel patient compliance with the pirates, but fiery young Harry (John Cairney), a wounded sea dog who’d sailed with Drake, organizes a resistance that seems hopeless — until Don Manuel, outraged by Captain Robeles’s brutality, comes over to their side.

Pirates of Blood River was good, but this is better, with a superior story tightly and tautly told. The acting is solid, the costumes and sets are convincing, and in the end most everybody gets what they deserve. Along the way we’re entertained by buccaneers roistering in the town tavern and playing Stupid Pirate Games, some admirable fencing with cutlass and rapier, a spiffy double-barreled flintlock pistol, and everyone’s favorite, death by quicksand. But the weaselly vicar lives to weasel another day, cursed be all the fates!

The Crimson Blade (or The Scarlet Blade

Another Hammer Films swashbuckler, set this time in 1648 during the English Civil War. Oliver Cromwell’s Roundheads pursue the fugitive King Charles I to the home of Lord Beverly; Colonel Judd (Lionel Jeffries) and his aide Captain Sylvester (Oliver Reed) capture the king and execute Lord Beverly, but his son Edward Beverly (Jack Hedley) vows revenge; disguised under the name of the Scarlet Blade, he organizes resistance and vows to liberate the king. Colonel Judd’s daughter Claire (June Thorburn) is still fiercely loyal to the Royalist cause, but Captain Sylvester desires her and is willing to betray Colonel Judd to get her — until he finds that Claire’s fallen for the Scarlet Blade.

Though Jeffries as Colonel Judd get top billing and Edward as the Scarlet Blade is the titular hero, this movie belongs to Oliver Reed as Captain Sylvester: proud, brutal, passionate but utterly amoral, his portrayal is this film’s centerpiece; he gets more screen time than anyone else and deserves it. June Thorburn as Claire Judd, fierce and idealistic, is almost his match, but doesn’t quite have the star power of the lambent and glowering Reed.

The story, written by director John Gilling, is the usual series of captures, escapes, betrayals, and rescues, with plenty of tense and well-directed fights and flights. There are desperate pursuits, impersonations, a secret passage, a torture dungeon, and two near hangings, all with that lurid Hammer touch, before the love triangle between Sylvester, Claire, and the Scarlet Blade sorts itself out and everyone gets what they have coming. Not bad.

I will always have a soft spot for Hammer because it gave a home to Oliver Reed, or as I think of him, the Laurence Olivier of Utter Crap.

Also for the list: Night Creatures, with Peter Cushing as a sinister reverend.

Not a day goes by that I don’t curse the fact that Hammer never did a Solomon Kane film starring Christopher Lee (although I’d also have accepted Cushing) in the title role.

These films from Hammer were great popcorn fare and they still entertain today. I remember seeing Sword of Sherwood Forest of course and Pirates of Blood River (the first time Christopher Lee co-starred with Oliver Reed and an eye patch; the 2nd being the 3 Musketeers), but I don’t think I’ve ever seen the other two. At least not in their entirety; I’ll have to look them up.

I loved Hammer films; cheesy and lurid, yes but plenty of action and more fun than you’re likely to find in most films today.

I like Richard Greene’s TV show. And I always like to see Cushing (I was thrilled to discover the gem, ‘Cash on Demand,’ on TCM).

But I thought that ‘Sword’ was just kinda dull. Nothing wrong with it, but it never grabbed me and pulled me in. I was hoping for more from a big screen, color version of Greene’s portrayal.

Not something I’m gonna rush to watch again.