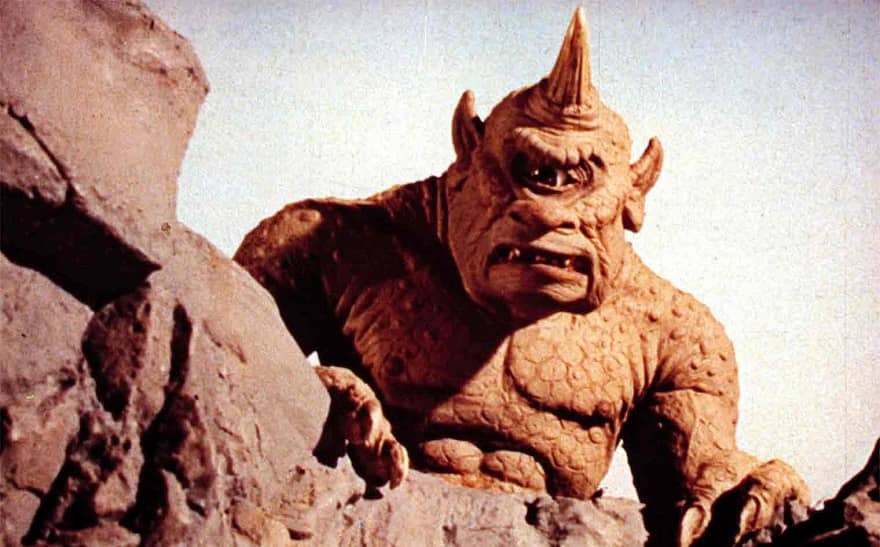 Nowadays you can’t walk down a store’s DVD aisle without tripping over a stack of fantasy films, but not that long ago they were as rare as roc’s teeth and finding a good one was like stumbling on a magic lamp. In that regard, Ray Harryhausen’s 7th Voyage of Sinbad was a watershed, a top-notch fantasy that seemed to leap out of nowhere into magical life (though it had predecessors in the 1924 and 1940 Thief of Bagdad films). Hollywood didn’t quite know what to make of it, so 7th Voyage was followed by just a few copycats that were pitched at children. But it inspired an entire generation of young filmmakers, special effects artists, and game designers, whose work would bear fruit in the fantasy boom that would begin in the early Seventies.

The 7th Voyage of Sinbad

Before 7th Voyage, Ray Harryhausen was just the creature guy for black-and-white monster movies; after this big-budget full-color fantasy adventure, he was the premier special-effects wizard of his time, not simply because he presented the most convincing and magical fantasy creatures in world cinema, but also because it proved he was a top-notch storyteller into the bargain. This film delights the child, adult, and professional storyteller in me equally, and I love it without reservation.

Even if you’ve never seen 7th Voyage, you know the film’s iconic cyclops, the roaring one-eyed giant with the hoofs and digitigrade legs, its face more expressive than even the movie’s human actors. And you’ve very likely heard Bernard Herrmann’s pounding and melodic score, probably his best-known non-Hitchcock soundtrack, evoking the surge of ocean waves at one moment and the growling of behemoths in the next.

The story is also a familiar one, but I won’t recapitulate it because there must be some readers who haven’t seen this film yet, absolute classic though it is. Suffice to say it’s based on the Sinbad stories from the Arabian Nights and has two main settings, the fabulous city of Bagdad from the Tales and the mythical island of Colossa, home of fantastic creatures like the aforementioned cyclops. Without going into detail on the plot, I do want to draw attention to its tight, classical structure: an action-packed ten-minute prologue that establishes the characters and situation, followed by three quick twenty-minute acts (Bagdad; Colossa; the wizard’s lair) jammed with colorful incidents — and then bang, it’s over, and the audience goes home thrilled and happy. All kudos to writer Kenneth Kolb and director Nathan Juran for pulling that off.

I mentioned a wizard, didn’t I? There’s always a sorcerous antagonist in a Sinbad movie, a tradition established with this film, and though Sinbad may be the titular hero, the wizard always gets the juiciest part. This time it’s the duplicitous Sokurah, played with gusto by Torin Thatcher. He drives every twist and turn of the story before meeting his inevitable fate, completely eclipsing Kerwin Mathews, this outing’s Sinbad. Mathews is the usual clean-cut Fifties hero, and isn’t asked to be anything more than handsome, active, and forthright, and for that he’s just fine. However, Kathryn Grant as Princess Parisa has more fun and is thoroughly adorable, especially in the scenes she shares with Richard Eyer as Barani, the young genie of a magic lamp.

But all the human actors, even the wizard, are outshone by the creatures, especially Sokurah’s fire-breathing dragon, easily the most persuasive dragon seen on film up to that date (and for many years thereafter). And Sinbad gets to wave his scimitar at a half-dozen other wonderful, mythical opponents animated by Harryhausen, the most impressive scene being a sword duel with a fencing skeleton, a fight so memorable that Harryhausen re-staged it in Jason and the Argonauts — but with seven skeletons!

And don’t forget that cyclops! Look, there’s not a moment wasted in this Arabian Nights fable, and you’ll enjoy every minute of it no matter how many times you’ve seen it before. Cue it up!

The Magic Sword (or St. George and the Dragon)

This is a children’s fantasy with story, direction, and special effects by Bert I. Gordon, who was mainly known for his cheesy low-budget Fifties monster movies such as King Dinosaur and The Amazing Colossal Man. It’s just two points north of terrible, those two points being its cheerful enthusiasm for fairy tale knights and monsters, and its casting of the aging Basil Rathbone as the evil wizard, Lodac. The hero, Sir George, is played, in his first starring role, by a young and baby-faced Gary Lockwood — yes, Lt. Commander Gary Mitchell from Star Trek and astronaut Frank Poole from 2001: A Space Odyssey, but at this point still very much a shallow surfer dude from Van Nuys, California.

The story is kinda-sorta based on the legend of St. George and the Dragon. The Princess Helene, whose royal father appears to be the King of Cartoons from Pee-Wee’s Playhouse, is magically abducted by Lodac as payback for his sister, who was put to death as a witch by a previous king. In seven days, Helene will be fed to Lodac’s ever-hungry dragon unless someone dares the Dark Journey and its Seven Curses to save her. George, the feckless foster son of feckless sorceress Sybil, has fallen in love with Helene by viewing her in Sybil’s magic pool while she bathes in the palace’s non-magic pool, which isn’t creepy at all. George swipes Sibyl’s magic sword, magic armor, and magic horse, reanimates six magic knights, and sets out to save Helene. But he has a rival in the treacherous Sir Branton, who also seeks to rescue the princess, and is determined to eliminate George on the way.

The next seventy minutes are a parade of Gordon’s cheeseriffic monsters, mostly actors in terrible costumes magnified or glowified by cheap special effects. There’s an orthodontically challenged ogre, a vampire hag, spooooky ghosts, evil dwarves, and cone-headed goons, all leading to a feeble two-headed puppet dragon. Rathbone just about saves the flick by gleefully threatening doom and curses at every turn, though even he can’t overcome the plodding pace of Bert Gordon’s direction. But you know what? If you were eight years old, you’d love it. 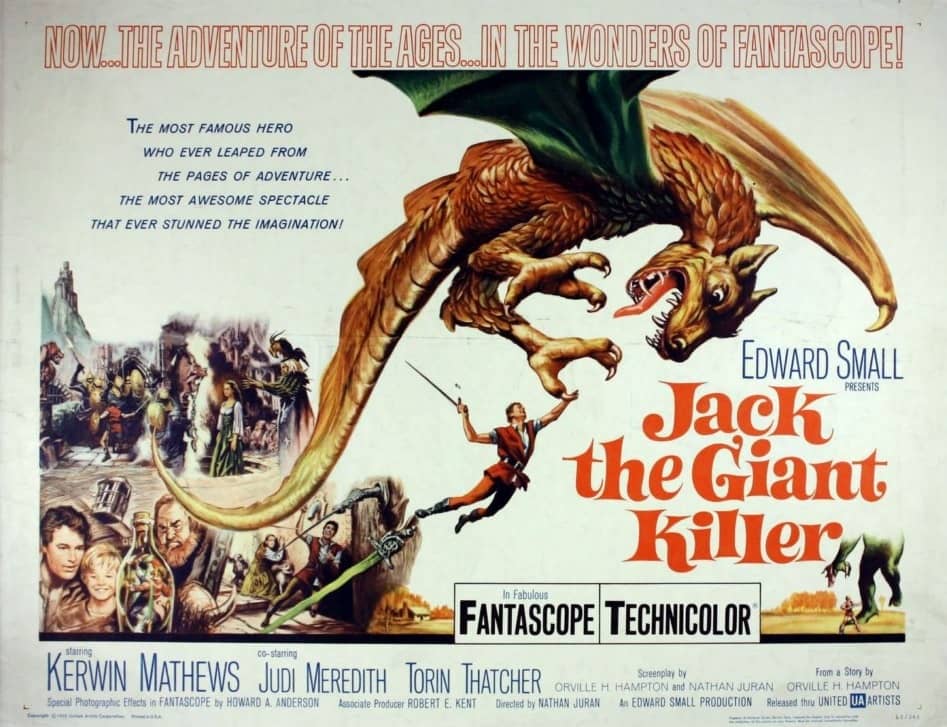 This movie has a curious history. After Columbia Pictures had a big hit with Ray Harryhausen’s 7th Voyage of Sinbad, indie producer Edward Small decided to try to cash in by imitating it, which is, after all, what Hollywood does best. He hired the director and stars of 7th Voyage but couldn’t replace Harryhausen because he was irreplaceable, so instead he brought on three apprentice stop-motion animators and told them to get as close to Harryhausen’s effects as they could. So, they did — and it was so close that Columbia threatened Small with legal action. Whether they had a case or not, Columbia definitely had more lawyers, so Small pulled his film from distribution, recut it, added some songs and rereleased it… as a musical!

Small was an old-school moviemaker who genuinely misunderstood why 7th Voyage worked, deciding that because fantasy appealed only to kids, he needed to make a fairy tale — and since the Harryhausen film had a one-eyed giant, to imitate it Jack the Giant Killer was the obvious tale to tell. The result is unabashedly a kid flick, but all in all not a bad one (if you avoid the musical version), with everyone in brightly colored theatrical costumes suitable for a fairy tale.

Kerwin Mathews as hero Jack is possibly even duller than he was as Sinbad, but Torin Thatcher as yet another evil wizard is just as awesome as before. The creatures, which consist of two giants, a dragon, a kraken, and a gaggle of demon witches, are mostly fanboy homages to Harryhausen, but you can see worse in every fantasy peplum so it would be churlish to complain. Director Nathan Juran had by this time a half-dozen SF and fantasy films under his belt, so he was used to juggling the special effects while keeping the story moving along. It’s good times — if you avoid the musical version.

Harryhausen is one of those things than which it really doesn’t get any better, and 7th Voyage is easily in his top 5, if not his top 3. (Personally, I’d put Jason & the Argonauts and Golden Voyage of Sinbad above it; and maybe Clash of the Titans, depending on the day you asked me. But it’s still a classic of the first water.)

Re Jack the Giant Killer. There’s a musical version?

This was a staple of my childhood. I particularly remember the opening scene where the tiny mannikin – presented as a wedding gift to the unfortunate princess and left on her bedside table – grows into a giant after dark and carries her off. I watched it again on Netflix a few months ago. It stood up pretty well, although the monsters, while fit for purpose, were not in the same class as Harryhausen’s.

A new Cinema of Swords! And I almost missed it!

7th Voyage is one of my favorite fantasy films and Jack the Giant Killer isn’t bad but I have to admit to having fond memories of The Magic Sword. I’m a sucker for any film with Basil Rathbone (and Estelle Winwood too) and I was 7 or 8 when it came out…and you’re right, I DID love it.