The evil mutant side of the story is simple, but inspired. We talk sometimes about evil villainy, but the megalomaniacs wanting to rule the world or gain fabulous wealth are not really an impressive scale of evil.

Proteus, the mutant whom the storyline is named after, is truly evil and truly deadly. His mutation takes a lot of energy – without a kind of energy cell within which he spent all of his childhood in, his body decays very quickly. But, he can move his consciousness to another body, basically possessing it. And for a time he can live off of that body. But he leaves behind a trail of husks, a new one every few days. Human beings to him are literally food and have no value beyond sustenance for him. 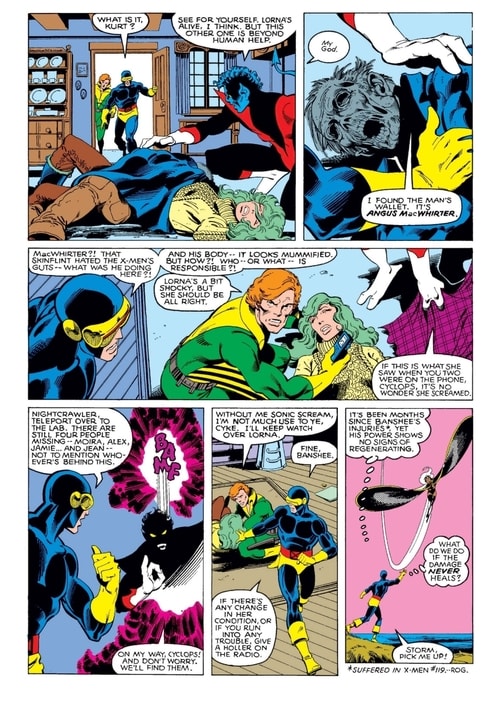 Worse still than this demonic-flavoured power is that Proteus can warp reality around him, changing the rules of physics and chemistry, gravity, transmuting one substance to another, making him incredibly powerful and almost unstoppable. 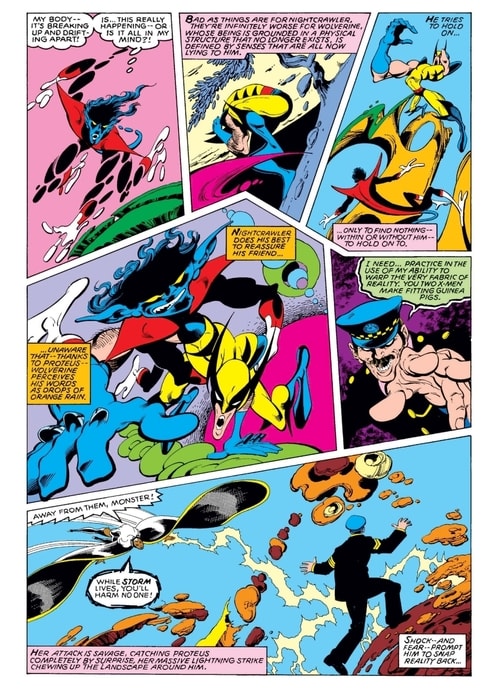 His only weaknesses are metal, which interfere with the energy form that is his essence, and his need for more and more bodies. 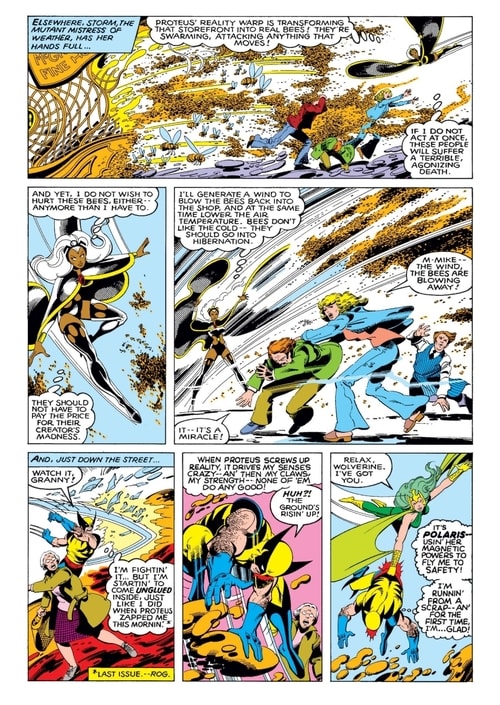 If superheroes are elevated by the villains they fight, the X-Men are very much elevated in this story. The story starts are Muir Island, where Proteus has escaped from his cell and tries to possess Phoenix (big mistake) and then flees to the Scottish mainland proper. The X-Men from New York are reunited with Jean and Polaris and Havok, who all though that Scott and the gang were dead. There’s little time for reunions, because Proteus is now out there, leaving no trail except for bodies. They have no way to even know what he looks like. 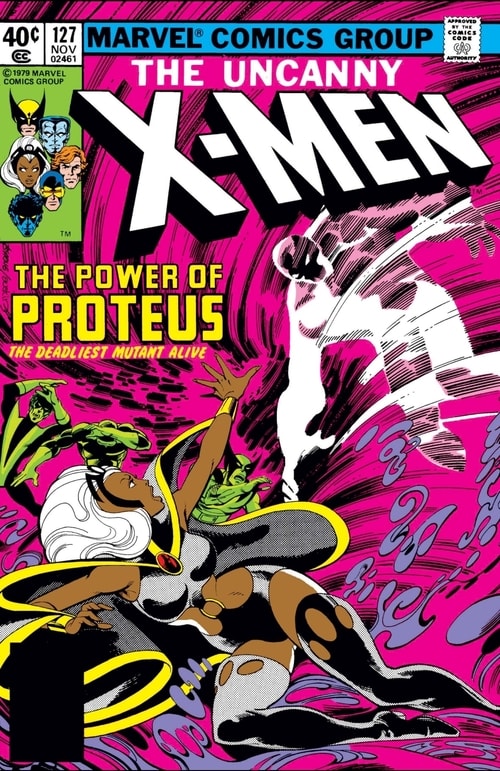 During the four issues, the X-Men have brushes with Proteus and have their butts handed to them and barely survive and it all comes to an amazingly exciting and satisfying conclusion in issue #128. The superheroics in these 4 issues is absolutely top-notch, an examplar of the form and of the Byrne and Claremont at the top of their partnership. Having #128 be my first issue of Uncanny X-Men was like being dropped into the deep end, but totally worth the reading investment.

But this 4-issue arc is significant and emotionally powerful for other reasons. Claremont and Byrne are masters at tormenting their characters. Wolverine is tested and for a time broken by Proteus. 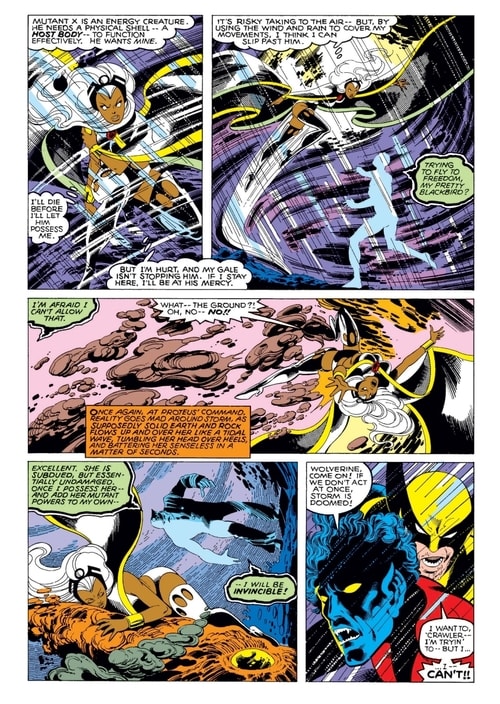 For a character whose sanity is so fragile, and whose sense of being is so tied to the accuracy of his senses, he’s particularly vulnerable and it takes Scott to pull him out of it (strange bedfellows). 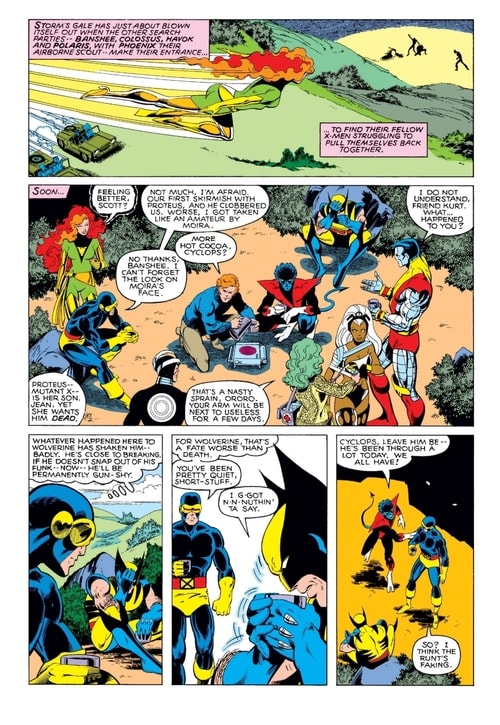 Moira is similar painfully tested, because Proteus is her son, born out of a violent early marriage to a cruel man. Moira tries to be a good mother, but discovers early that her son is basically a mutant vampire. Ororo and Peter, the innocent lawful goods of the party, are challenged by their first encounter with true, murderous evil. 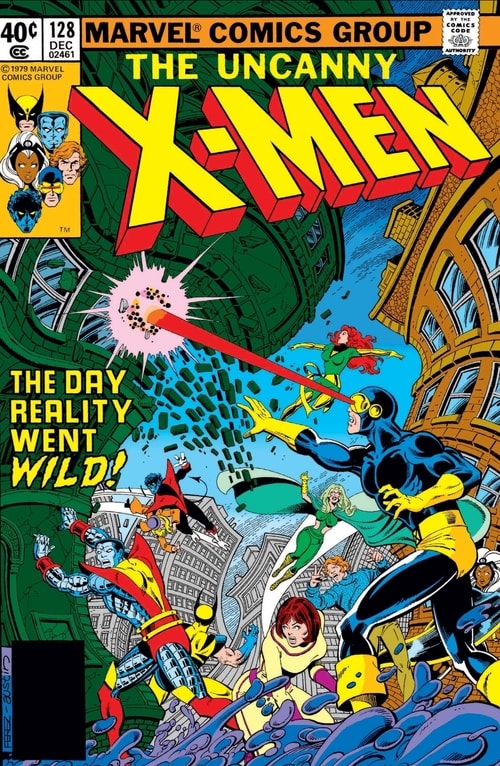 And then there’s Jean and Scott. Jean sacrificed herself and died to save Scott, only to have the Phoenix come between them, right before she thought Scott was killed. And Scott, emotionally stunted from his orphaning and his early amnesia from his accident, didn’t know how to handle the drastic change in his lover before she apparently died. Beast and Cyclops have a joyous reunion (below), but the Scott-Jean one is stilted and awkward. 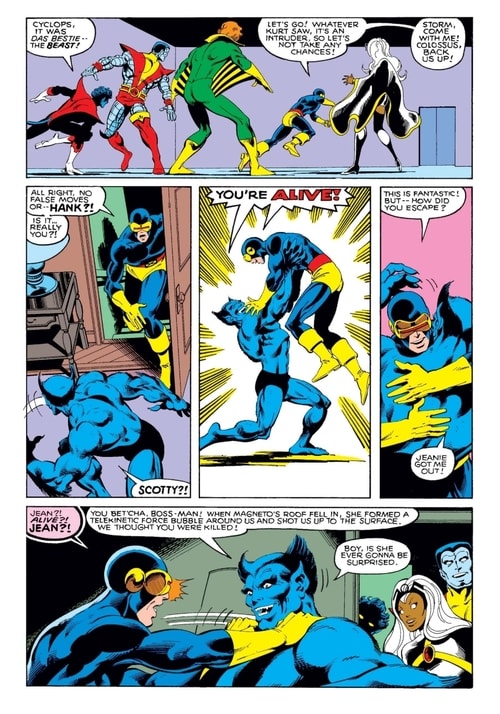 They’ve each seen other people since, which seems tragic to the faithful romantic in me. Scott’s got the key to Colleen Wing’s apartment and Jean has met young hot guys on her slow travels to Scotland after she was abandoned by a grieving Charles Xavier. This is so messed up, but it’s not even the worst of it. The Proteus Saga gives us our first real view of Jason Wyngarde, creepy 1970s beard guy, who has been and continues to psychologically manipulate Jean. 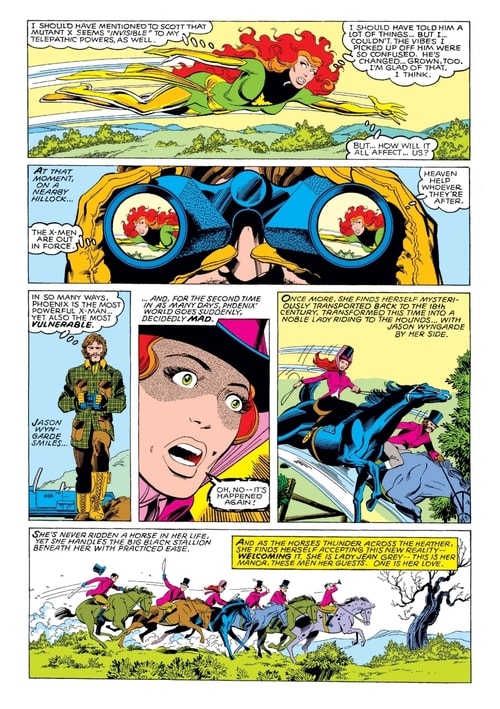 Not only is he twisting her, but he’s tempting her with strange fantasies of violence and power and cruelty. 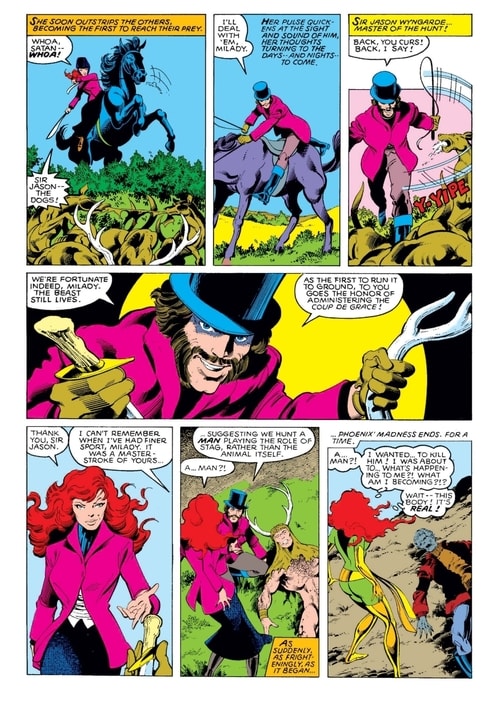 I read this story and the Dark Phoenix Saga as a pre-pubescent, but despite not knowing more than where babies come from, I knew that there was some seriously messed up $#!* in here. I felt something kind of sick in my stomach when I realized that Wyngarde had been appearing to Jean in different forms, manipulating her emotional vulnerability, her uncertainty and fear about the new power (image below) and temptations of the Phoenix, and using that to even sleep with her. 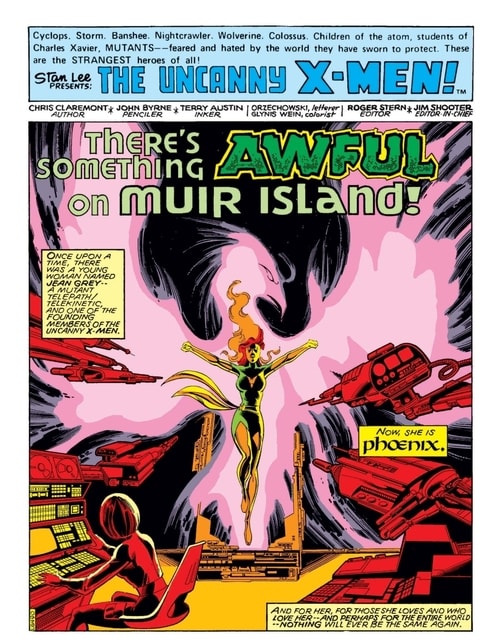 It’s subtext of course, but that subtext is pretty strong and that violation disturbed me then and still does now. I love Jean and Phoenix as character, and both are victims of Netflix Jessica Jones-Purple Man level evil. (Incidentally, I can’t watch Jessica Jones – that level of cruelty is just too much for me; at least here I know it’s only a few pages and not so graphic.) 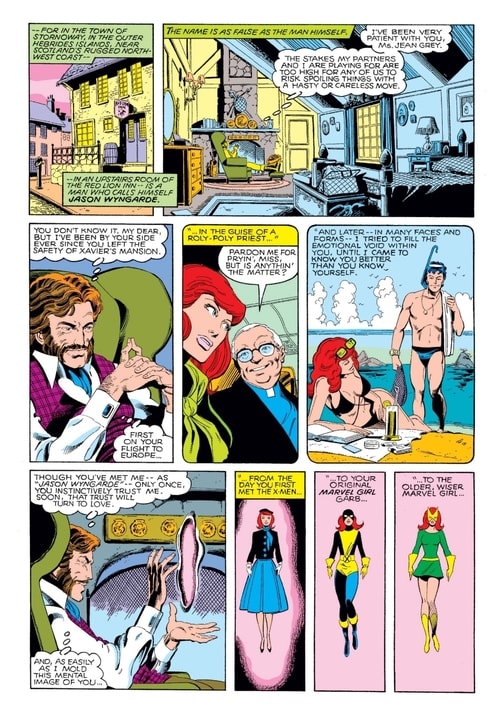 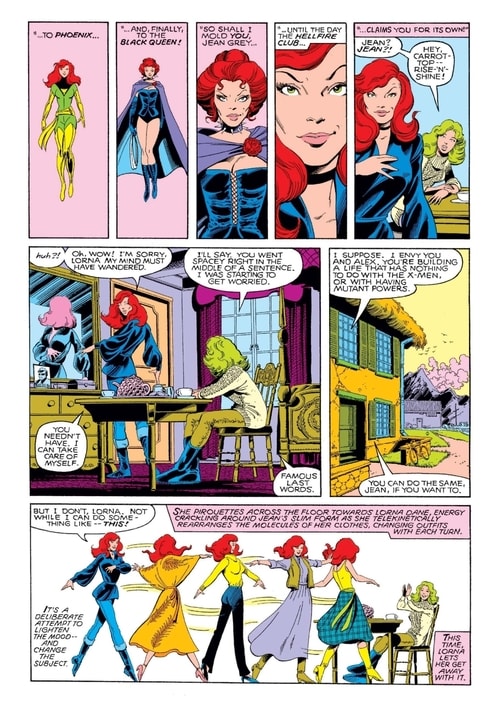 That manipulation drives Jean in directions she doesn’t want to go, and drives further wedges between her and Scott, in addition to all the other ones that happened independent of Wyngarde. But in these four issues, Claremont and Byrne have united two of the most cruel and evil opponents the X-Men ever face. I know the Sentinels are an instrument of mutant genocide and I read the mutant massacre that will happen in another hundred issues, but mass murder becomes flat after a while. Claremont and Byrne make us feel this torment in a way far more deep and personal.

I think most modern readers will have some trouble with the amount of captioning and dialogue in Claremont 1979 work, but that was a product of the time and of the writer himself. I guess I’m insulated against it because this was my first introduction to comics. I would say nonetheless that this is a classic, well worth reading or re-reading, and is an essential prelude to the Dark Phoenix Saga, which starts in my next post!