On a sunny day back in May of 1976, I went with my dad to his office. He was only going to work for a few hours, then we were going fishing. To kill some time, I went over to the drugstore across the street. There I discovered something life changing — science fiction digests!

I was a big SF fan already by that time (just short of my 13th birthday) but I had no idea that SF magazines existed. I bought the issues they had of The Magazine of Fantasy & Science Fiction, Analog, Amazing Stories and Fantastic Stories. How could I not, seeing those great covers!

Later that summer, I went with my mom to a garage sale, and found digests from the 1950’s and 1960’s for the first time. Most were F&SF, but there were a handful of Fantastic Stories and Amazing Stories in the stack. I bought ’em all, and the seller even threw in for free a coverless copy of Fantastic Adventures Quarterly, the first pulp I’d ever seen.

Among those couple issues of Fantastic was the August 1961 issue, featuring a cool Leo Summers cover for Poul Anderson’s “Goodbye Atlantis.” Needless to say, I was very pleased when I was able to acquire the original painting a few years ago.

And speaking of that coverless copy of Fantastic Adventures Quarterly, this was a pulp that took three unsold copies of Fantastic Adventures, stripped off the covers and stapled them together with a new cover. When I got home, I could not figure out why someone had stapled three issues together, so I unstapled them, and created separate issues, with homemade covers made from construction paper and scotch tape. 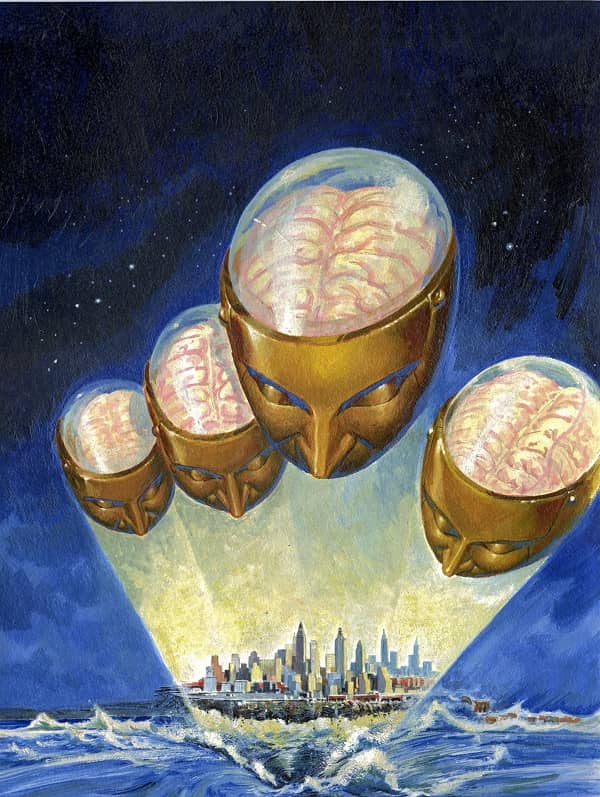 The issues were the October, November and December 1950 issues, but the October issue was missing the first eight pages. I typed up a table of contents, but didn’t learn until years later that the first story, “Masters of Sleep,” was by L. Ron Hubbard. 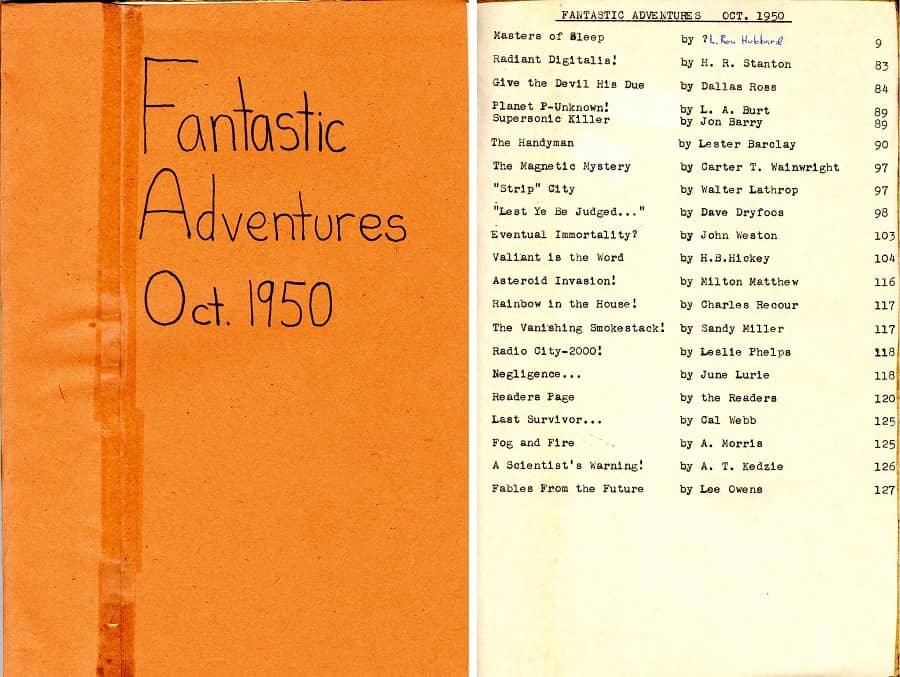 Great story Doug! I discovered SF digests the summer after you did, in 1977. My first issue of Analog was September, 1977. I’d been reading Asimov’s The Early Asimov and Before the Golden Age, in which he talked about SF magazines, and I biked down to a convenience store in Ottawa to see if I could find any. And I did!

Thanks for sharing your discovery, Doug!

Great piece. I found and read my first digest, an issue of ASTOUNDING SCIENCE FICTION in in 1956, when I was 10 years old. I was immediately hooks.

Analog – February 1971 – Cover story: The World Menders by Lloyd Biggle Jr. – Purchased at a Drug Fair in Falls Church, VA. 14 years old. Still buying the hard copies almost 50 years later. Given the lack of distribution of SF mags even before the pandemic and the general drift to on-line reading, I doubt many new fans discovery SF mags this way anymore.

> Given the lack of distribution of SF mags even before the pandemic and the general drift to on-line reading, I doubt many new fans discovery SF mags this way anymore.

I think you’re absolutely right. For all the finger pointing around the declining circulation of SF magazines over the last few decades (I’ve seen distribution changes, reduced foot traffic to bookstores, and the rise of computer gaming and other forms of entertainment all blamed), I tend to think that’s the single biggest cause.

Most of the SF magazine readers I know all started in their early teens, and all have an origin story similar to Doug’s. But I don’t know any readers under 30 who found SF magazines the same way our generation did.

I’m 68, and probably started reading science fiction pulp magazines in my early to mid-teens, finally getting my first story actually published in Fantastic Magazine in 1970. Our generation can look on those days with wonder. Readers growing up in these times will never have those great experiences.