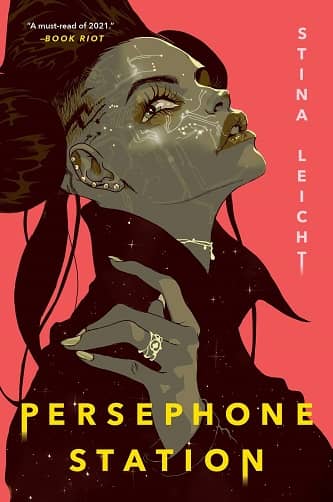 Stina Leicht has had an impressive career over the last decade. Of Blood and Honey came in sixth in the 2012 Locus Poll for Best First Novel; sequel And Blue Skies from Pain appeared on the nomination list for the Locus Award for Best Fantasy Novel. Her two-book flintlock fantasy series The Malorum Gates wrapped up in 2017.

Her new novel Persephone Station arrives from Saga Press next month, and it’s a significant departure for Leicht — a space opera that Publishers Weekly calls a “sprawling, frenetic science fiction take on The Seven Samurai,” which sounds like something I need.

Here’s an excerpt from the Kirkus review.

In this earnest space opera, an ensemble of badass women and nonbinary and queer characters fight corporate overlords on the semilawless planet Persephone.

A century ago, the Emissaries, hidden beings indigenous to Persephone, gave the gift of prolonged life to Rosie, a nonbinary cleric-colonizer, and Vissia, now head of the corporation that owns the planet. Despite and because of that gift, Vissia’s bent on exploiting the Emissaries until nothing is left. Rosie, now a crime boss, enlists Angel, the expelled former student of an all-female martial arts academy, and her team of revivified United Republic of Worlds soldiers, to protect the Emissaries. Unless they can be convinced to reveal themselves and join the URW, making the corporate claim on Persephone void, the odds are not in their favor…. Their gender-fluid nonbinariness is just one part of a delightfully complex, genuine, and amoral character who could make this novel worth your time.

Persephone Station will be published by Saga Press on January 5, 2021. It is 512 pages, priced at $27 in hardcover and $9.99 in digital formats. I can’t find any information on who created the cover, but I like it.