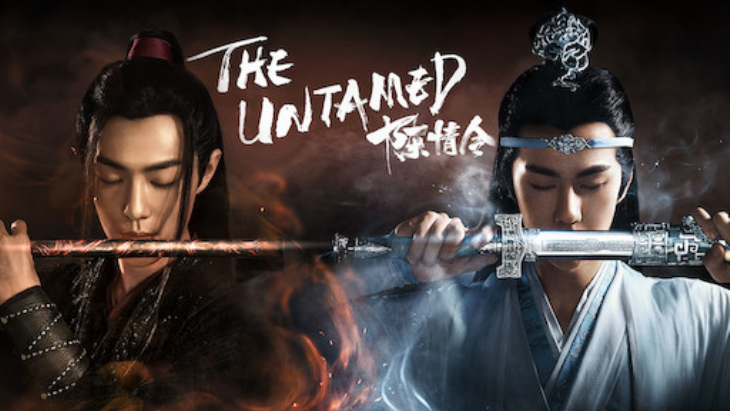 I have a new obsession. I seem to be switching obsessions a lot, but the truth is I’m not switching anything at all. I’m simply adding. This time around, I’m absolutely infatuated with a show on Netflix that I’m a little mad took me so long to check out. That show is The Untamed, a 2017 live-action adaptation of the Chinese fantasy novel Mo Dao Zu Shi (Grandmaster of Demonic Cultivation is the English title) by author Mo Xiang Tong Xiu. The novel is not yet officially translated into English, but I’m desperate for it to be. I want this thing on my shelf. Like, yesterday. Granted, since it’s a web novel, it’s not likely to be on anyone’s actual shelf, but lordy do I want this book as a real thing in my hands.

Anyway, the show is wonderful. I understand that, from my very basic research from this post, that the live-action adaptation is quite divergent from the novel, so I’m content to watch the show while waiting for that official English translation (there are unofficial online translations, but I would like to put money into the hands of the author, you know?), knowing that the two are different enough that my enjoyment of the novel won’t be impacted by having watched the adaptation first. Also, apparently this adaptation is only one of many, and so I might have to go and find other adaptations.

The story itself is a multi-layered fantasy epic drama with grand themes of belonging, family, clan rivalry, justice and love. Centering around Wei Wuxian, also known as Wei Ying or the Yiling Patriarch, an orphaned child who was adopted by his father’s master’s family and is considered a sibling of the master’s two children Jiang Cheng and Jiang Yanli, the story is often funny, and terribly sweet, and also very, very dark.

It doesn’t pull punches, killing many folks, straining and breaking relationships, and turning heroes into villains. Everything is difficult, and you can understand why people act the way they do, calling into question what you might do if you were caught in these positions. Essentially, it’s my favorite kind of story. Give me the darkness. Give me unsure characters and well-meaning people who unwittingly make bad choices. Give me consequence and heartache and despair. Those alone, however, do not make this one of my recent favorites. What really makes it for me is the thread of a deep abiding love that moves like gossamer throughout the whole piece; a glittering filament of hope that grabs a hold of the heart and doesn’t let go.

I’m talking about the love between Wei Ying and the Hanguang Jun (light-bearing Lord), Lan Zhan, who is also called Lan Wang Ji or simply Master Lan. I got the impression early on that this is more than brotherly love or the love between friends (like Sam and Frodo in The Lord of the Rings – a hill upon which I’m willing to die). Given China’s ban on LGBTQA+ portrayal in cinema, all the viewer gets is subtext. It’s definitely there, though. It’s so obvious the subtext is practically text. You see it in the long, searching gazes, the frequent touches, the gentle care with and the defiant defence of one another. There can be no mistaking it. Lan Zhan and Wei Ying are in love. 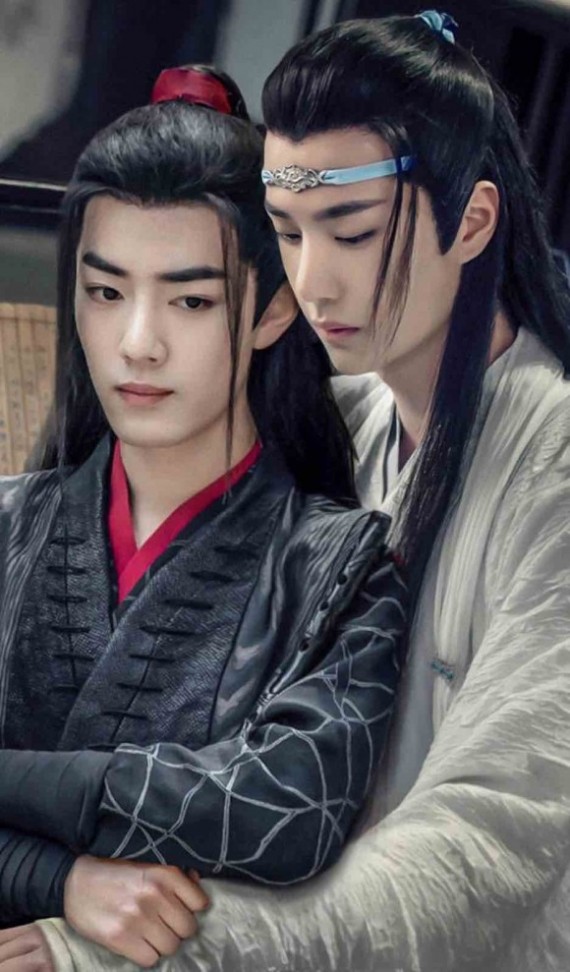 Wei Ying, played by Xiao Zhan, and Lan Zhan, played by Wang Yibo. I mean… I mean… Also, side note, I find this image
unbearably beautiful, and I wish I was any good at portraiture because I would love to paint this and hang it on my wall.

Folks, get you a lover who looks at you the way Lan Zhan looks at Wei Ying.

Lan Zhan, when we first meet him, is sombre, stoic and adheres to the rules so strictly that he does not appear to have a thought or personality beyond the Lan Clan’s three thousand five hundred rules of conduct. Wei Ying, on the other hand, is impulsive, hot-headed and delights in breaking rules he feels are unnecessary or unjust. The story here is your basic love story – boy meets, well, boy, and at first they appear to be too different to get along. Lan Zhan in particular, appears to be doing everything he can to not like Wei Ying. However, like in Jane Austen’s Pride and Prejudice, the two heroes gradually come to respect one another and go on to form a bond so strong that even the worst of Wei Ying’s chaos cannot break it.

Lan Zhan becomes and remains fiercely loyal to Wei Ying, aided, no doubt by Wei Ying’s heroic adherence to the principles of justice, no matter what, and his continually taking a stand for that virtue though the world comes to despise him for it. Lan Zhan is often punished for his loyalty to Wei Ying, and yet it never waivers.

This beautiful love story, set against the tumult of an epic that grapples with right and wrong, the cost of peace, and family has turned me into an outright romantic (my sixteen-year-old self is rolling her eyes so hard at me right now). I cannot express to you how much I love this love story.

Special mention must go to Lan Zhan’s older brother, Lan Xi Chen, who recognizes almost immediately that Wei Ying and Lan Zhan are meant for one another, and who offers patient, gentle guidance to Lan Zhan without judgement, often contriving to bring Lan Zhan and Wei Ying together – even after the rest of the world has decided to hate Wei Ying. Though Lan Xi Chen is far more diplomatic than his often blunt brother, being naturally kind and good, he is ultimately on the more righteous side (though, like all good characters, his position is often compromised in the effort of maintaining peace and balance, and is entirely misplaced one case. I love me some good grey areas). Honestly, Lan Xi Chen gets the brother of the year award from me. I love his character so very much. 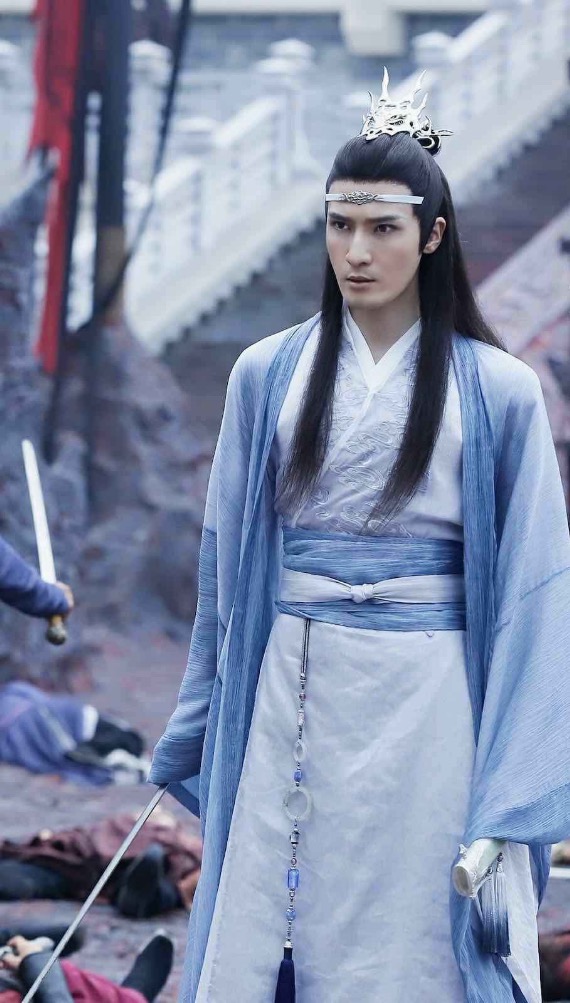 Lan Xi Chen played by Liu Hai Kuan. Also, also, can we talk about how there are so many ethereally beautiful
men there are in this series? What the hell, China? Did the elves all leave Middle Earth and go there?

In addition to this adorable tale of love, The Untamed offers an incredible, dark story, split in two. You are introduced to Wei Ying and Lan Zhan (whom I maintain gets one of the best entrances of any character ever in this series), before being thrust into a long, long flashback (about thirty of the fifty episodes are all a flashback) where you get to witness the tragedy that is Wei Ying’s first life (you really need to watch to understand) and the emotional fallout of that for both himself and those who knew him. I adore stories that reflect on emotional and psychological impacts of events, and the breaking of Wei Ying’s psyche due to grief and anger in his first life was exactly my cup of tea.

The second half returns to something softer and sweeter, with Lan Zhan, who had been grieving Wei Ying’s death for sixteen years, reunited with his soulmate, determined to prove his love by continually coming to Wei Ying’s defence, bringing him wine (which, if you’ve watched the first half, is the sweetest gesture ever), and one particularly amusing episode of drunkenly stealing chickens, while the pair try and solve current events that are connected to the tragedy of the past. There’s still plenty of tragedy, but it’s still much lighter fare than Wei Ying’s first life. Due to China’s censorship regarding LGBTQA+ depictions, the story doesn’t end in a happily ever after for the two… sort of. It’s left open enough, though, that just a touch of imagination, and it absolutely could be. It is for me. In my head, they’re happily married, wandering the world cultivating together.

The Untamed exists in a refreshing fantasy world. Long steeped in all kinds of fantasy images and magic systems based in European conceptions, the distinctly Chinese magic system and fantasy world is infinitely more interesting to me. Too much of one thing was getting boring, and I wasn’t really interested in watching more of the same. That was part of the reason I decided to check out this show. Let me tell you, I’m revelling in the beauty of the costuming (OH MY GAWD, THE COSTUMES!), the music and the landscapes. It’s a kind of fantasy that I don’t encounter all that often, being a white woman living in a colonized land, and its difference from the tropes (though there are plenty of those that remain the same as always), images, and systems I’m used to is beautiful to me. I’m enjoying this peek into a world very culturally different from my own, and yet dealing with very familiar things indeed.

And the costumes…  The COSTUMES! 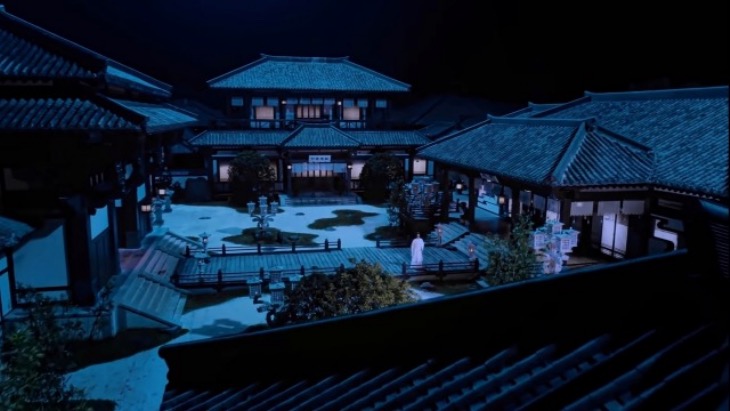 The Cloud Recesses, home of the Lan Clan.
How stunning is this place? I could live here.

The show is not without its problems of course. While I generally enjoy the fight scenes (some of the sword work is stunning, many other instances made me snort), there is an awful lot of unnecessary wire work, with random nonsensical spins that I think might be an excuse to show off the lower layers of those gorgeous costumes and nothing else. Some of the CGI is also a bit wonky, and there’s a particular practical effect that wasn’t good at all. Literally none of the instruments in the scenes are actually being played and that’s painfully obvious (except one scene near the end of the series, which was pretty convincing). Also, the English captions offered on Netflix are a bit… odd. No doubt this is part of the censorship thing, but there is one particular use of the word confidante which might have been better served by the word soulmate. None of these things were enough, even combined, to make me want to stop watching.

I am legitimately hooked on this series. I will be buying the Blu Ray… if such a thing exists for North America yet, and I’m praying that we get an official English translation of the novel soon, because I really want to read the source (and put my money where it should go – into the pocket of the creator). Until then, I’m content with watching the live-action adaptation on Netflix. It’s absolutely addictive; a beautiful, fascinating, heart-breaking-and-mending epic, and I just can’t get enough.

In fact, I think that I’ll rewatch the series with the intention of doing a series of reviews for each episode on my personal blog. I’m sure I’ve missed some things the first go around. It’s well worth a second viewing. Also, the comments on YouTube have helped enormously with my understanding of some of the nuances like, for example, Lan Zhan using Wei Ying instead of his courtesy name (Wei Wuxian) when speaking about him being a hint at the former’s developing feelings… something that is foreign to me as a Westerner, but a pretty big hint to those in the know. Thanks, YouTube community, for deepening my understanding of cultural things I’m otherwise entirely unaware of!

Listen, when I said I was obsessed, I meant it.

Anyway, I highly recommend that you check out The Untamed if you haven’t already. Please. I need someone to geek-out with over it.

Alright, I’m done gushing. Publically. Except for on my personal blog.

Nothing To Give But My Heart Chinese Novel – The Millennial Mirror