In late 2017, I published an article at Black Gate called “Elric and Me” in which I discussed revisiting Michael Moorcock’s most famous creation. Three years later, I’ve decided to revisit another of his creations, Corum Jhaelen Irsei., the Prince of the Scarlet Robe.

I first became acquainted with all of Moorcock’s characters in the early 1980s when I discovered Elric and Hawkmoon in Appendix N of the Dungeon Master’s Guide. Over the next several years, I tracked down as many of his works as I could, and my timing was fantastic since during those years, DAW was printing and reprinting nearly all of Moorcock’s fiction in reasonably easy to acquire versions.

Over the years, I’ve read and re-read various series by Moorcock. Kane of Old Mars in 1998, The History of the Runestaff in 2010, and, of course, Elric in 2017. When I picked up the anthology Michael Moorcock’s Legends of the Multiverse in August and read the Corum story included there, I realized that I hadn’t actually re-read the Corum novels since the 1980s. Perhaps it was time to revisit them. 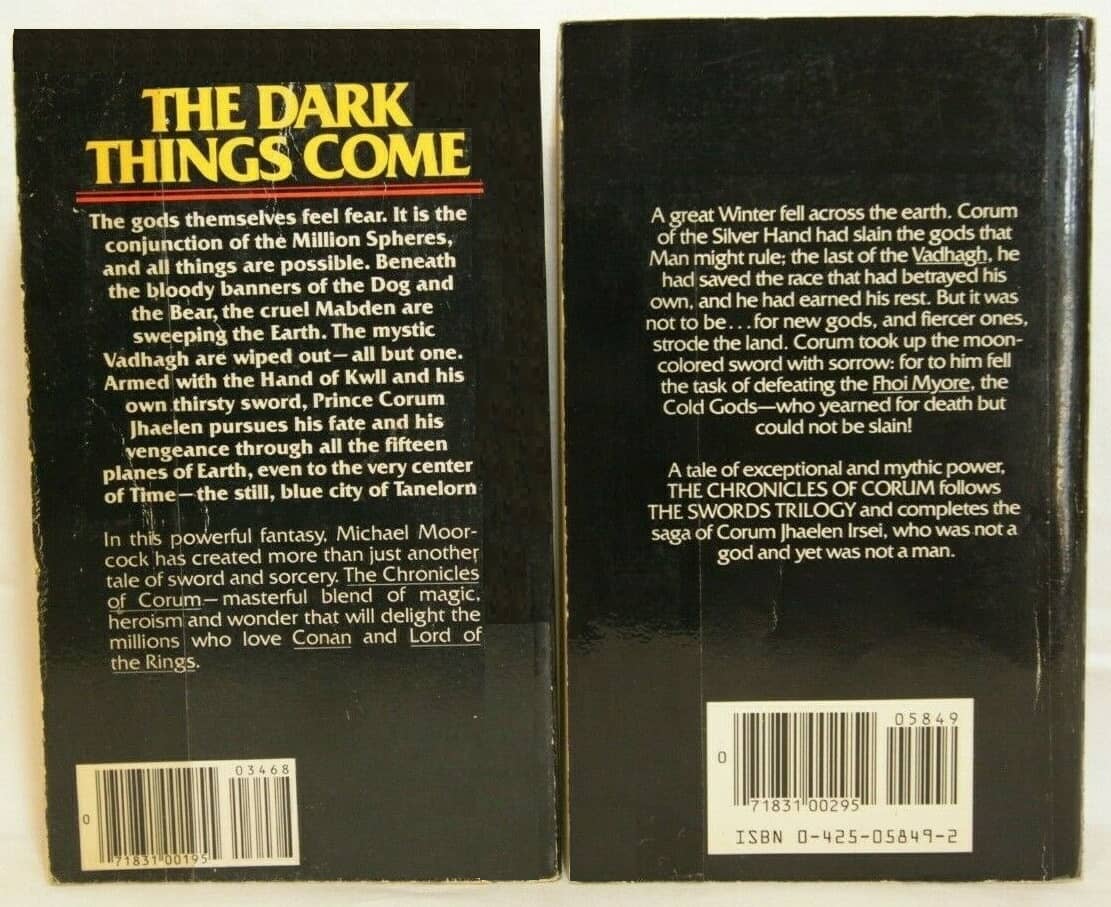 Back covers for The Swords Trilogy and The Chronicles of Corum

I remember enjoying The Swords Trilogy more than The Chronicles of Corum. In the first trilogy, Corum was tortured, had his hand and eye replaced with the hand and eye of gods, and had to defeat Arioch, Xiombarg, and Mabelode, all lords of Chaos, although Arioch was the best known since he was Elric’s patron. My memories of The Chronicles of Corum were of a trilogy in which a watered down character, without the eye and hand of a god, is placed in a reasonably generic Celtic world. It would be interesting to see how my memories stack up.

The Knight of the Swords left me underwhelmed. Corum doesn’t do anything, but rather moves through it at the whims of other people. His father sends him out into the wide world to find out what has been happening at the other castles of the Vadhagh. He is captured and tortured by Glandyth-a-Krae, who will become his nemesis in the first trilogy and who is quite a good villain, although he disappears for much of the first novel and the second. Corum falls in love with the Margravate Rhalina (and vice versa) mostly because, well, there is no reason. He is given the Eye of Rhynn and the Hand of Kwll by a mad godling who sends him on a quest to destroy Arioch. Whenever he faces insurmountable odds, Corum summons help using the hand and eye and then moves on. When he needs protecting, the hand acts of its own volition. Volition seems to be the one thing Corum lacks. And Arioch, who any reader of Elric has come to know, turns out to be not a big deal.

Corum begins to improve in The Queen of the Swords. He has acquired that sense of agency that was lacking in the first novel as he and Rhalina, along with newly acquired companion Jhary-a-Conel, plan a defense against the army that Glandyth-a-Krae serves. Their plans take them away from their own plane and into the realms ruled by Xiombarg, Arioch’s sister, who seeks vengeance for the destruction of Arioch’s death. While Xiombarg isn’t as well defined as Arioch in the Elric novels, she does briefly appear in them, but she continues to remain ill-defined in the novel named for her. Unfortunately, while Corum now can make plans and act on them, much of the activity still feels as if Moorcock is willing to call in deus ex machina to resolve the situation. One thing The Queen of the Swords does do right is the landscape. Visiting Xiombarg’s realm, Corum, Rhalina, and Jhary must cross the Lake of Voices, which is one of the more evocative chaotic constructions Moorcock has created.

The final book of the Swords trilogy continues in the vein of the second. The first section sees Corum, Jhary, and Rhalina dealing with the effects of a world-wide spell cast by a Nadragh sorcerer (with the assistance of a demon from other planes) that causes people all over the world to hate those they love and view everything they say with suspicion. As in The Queen of the Swords, their quest to resolve the issue takes them to the planes that are ruled by Mabelode, the last remaining, and most powerful, sword ruler. On the plane of the Chaos Duke Teer, they find themselves in a world ruled entirely by Chaos, in which nothing has any permanence, and they are separated. Finally, Corum must rescue Jhary from the vanishing tower of Voilodion Ghasnasdiak with the assistance of two other aspects of the Champion Eternal in a sequence which also appears in the Elric novel The Sleeping Sorceress (a.k.a. The Vanishing Tower).

Eventually, Corum finds himself face to face with the Lost God Kwll, to whom he surrenders his eye and his hand. While Corum faces off against his enemy, Glandyth-a-Krae, Kwll and his brother Rhynn handle Mabelode. While Moorcock had set Corum up to face off against the three sword rulers, two of the three are defeated with little direct input from the trilogy’s hero.

While preparing this essay, I was discussing Moorcock’s writing with Black Gate editor John O’Neill and commented that it was possible that people needed to imprint on Moorcock, at least his fantasy work, at the right time in their life. Although I certainly did, and, as I said, had fond memories of the Corum novels, it seems that for this character, or at least this trilogy, that imprinting wore off having not read these books in several decades, even as I’ve continued to reread and enjoy more fully the novels of the other aspects of the Eternal Champion.

Steven H Silver is a seventeen-time Hugo Award nominee and was the publisher of the Hugo-nominated fanzine Argentus as well as the editor and publisher of ISFiC Press for 8 years. He has also edited books for DAW, NESFA Press, and ZNB. His most recent anthology, Alternate Peace and his novel After Hastings, was published in 2020. Steven has chaired the first Midwest Construction, Windycon three times, and the SFWA Nebula Conference 6 times, as well as serving as the Event Coordinator for SFWA. He was programming chair for Chicon 2000 and Vice Chair of Chicon 7.

“Imprinting” at the right age is something that’s necessary with a lot of the stuff we read, I fear. I read the Corum books in high school and thought they were great, but haven’t revisited them since. Who knows what my reaction would be now?

Moorcock is an undisputed great, but I’ve been rereading the Elric books over the past few years and it’s appalling how slapdash some of them are. I think the Runestaff is the the most “even” of those early fantasy series, and even those books often show the signs of haste.

There is a part two of this article in which I look at The Chronicles of Corum with a possibly surprising reaction.

The Corum books (those exact Berkley Medallion omnibi) were the first Moorcock books that I owned (I had already read Elric, but those were copies borrowed from a friend) and it’s probably the imprinting talking (SEE ALSO: Edgar Rice Burroughs) but I still like them a lot — Corum might be my favorite Eternal Champion aspect. They have that sweep of imagination, some very effective imagery, and you get an entire trilogy in fewer pages than a single fantasy doorstopper volume.

I do need to revisit the second trilogy one of these years, although I remember it being kind of unremittingly grim, even moreso than the first.

I think that I have found more of my cohort: high school/college-age Moorcock fans! I first read the Lancer edition of The Dreaming City, then found the DAW editions of the rest of Elric (with the unrefusable Michael Whelan covers).

My remembrance of Corum is similar to Mr. Silver’s own: loving the Swords Trilogy, puzzling over the Celtic-y flavor of the Chronicles. It has been decades, so I could easily have the same reaction on a re-read, too.

One major disappointment, much as I liked the physical design and layout of the Swords omnibus, was (and is) the cover. Who *is* that? I guess the billowy red cloak means that it is meant to be Corum, but … really?

I still quite like the Swords trilogy. I wasn’t as enamored with the Chronicles when I first read them.

Possibly oldest on shelf unread series. Picked up The Knight if Swords and the second omnibus at a flea market way back, think I had just started working so was about 20. Had fond memories of The Runestaff and knew Moorcock was a much lauded author. Picked up The King of Swords shortly thereafter but then for whatever reason it took me forever to find a copy of The Queen. By that time I had lost interest, moved on, maybe just my tastes had changed. Maybe the imprinting was not strong enough, although I do suspect my desperate read of (aweful in my opinion) Dragon in the Sword when I was in a school perhaps simply diluted the imprinting. Will I ever read Corum? Don’t know. Hope so…

I’m not sure characterisation was ever a strong feature of Moorcock’s S&S work (nor am I sure it needed to be!) but I would say – in Moorcock’s defence – that I think Corum does have an arc of sorts. He is an aesthete, one of a race of aesthetes, who is rudely forced to confront what until now he’s ignored and despised – the mabden, and by extension, the world that exists outside the confines of his castle. I think his subsequent romance with Rhalina is meant to illustrate how doing so changes him, as the old Corum would never have considered a relationship with an inferior species. Just my two cents’ worth!

Wow, that is so different than my own experience and re-read I don’t know where to start.

For me, I read The Silver Warriors first, then Elric then Corum, in these exact editions. I absolutely agree that the Chronicles of Corum are, just like the loosely arranged “Chronicles of Castle Brass” that followed the four Hawkwoon books, an exercise in futility — there is really nothing that interesting, Moorcock, as he can be his want, starts to wander into pointless strangeness and really just seems determined to be writing the books so he can eventually kill the character off.

But the Swords Trilogy, especially the first, remains one of my absolute favorites of the Champion cycle. I am not sure Queen lives up to Prince, but then the second and third Runestaff novels that follow Jewel in the Skull don’t quite live up to that either. As a result, both the novel The Runestaff and King of Swords cram a lot in to wrap up the tale.

Whatever the case, I DO think the Corum of that trilogy has a clear arc, in many ways a strange Lawful parallel to Elric’s Chaotic one.

That’s a good point, Greg – ie, how Corum serves Law just as Elric serves Chaos. I’d see that as tying in with my earlier point: Corum is an individual who has led a quiet, ordered existence until the forces of chaos intrude into his life. Maybe one reason why the character might seem a bit lacklustre is because Moorcock has a more natural affinity with chaos than with order (while recognising the necessity of both)?