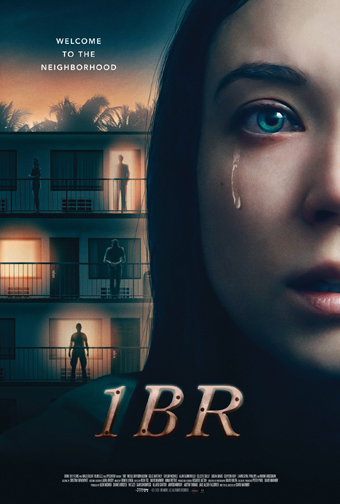 Last year I almost reviewed a movie at Fantasia called 1BR. But exhaustion got to me as the festival wore on, and I passed on the film. I’m never happy about having to compromise with fatigue, though, and since 1BR recently came to Netflix — where for a while it was among their 10 most-streamed movies, at one point even reaching the top 5 — I decided to rectify last year’s omission and take a look at it now.

Written and directed by David Marmor, his first feature film, it follows Sarah (Nicole Brydon Bloom), a young woman who feels estranged from her father (Alan Blumenfeld). Working in Los Angeles as a temp with aspirations to become a costume designer, she finds her first apartment as the film opens. Though the plumbing makes strange noises, her neighbours seem nice and Sarah befriends an old former actress named Edie (Susan Davis) while being drawn to the handsome Brian (Giles Matthey). But creepy one-eyed Lester (Clayton Hoff) keeps trying to push a weird old book about community. And Sarah’s got a secret: she moved in with her cat, Giles, even though building manager Jerry (Taylor Nichols) told her there were no pets allowed.

In fact things are worse than Sarah imagines. It turns out the book about community’s a bible for the apartment block — and that all the residents are part of a cult-like group prepared to force Sarah to join them. Acts of physical and psychological torture follow. Sarah is broken down and slowly builds herself back up, and it all builds remorselessly to a powerfully symbolic final shot.

The movie works because it pays so much attention to Sarah’s character, as well as the people around her. Bloom brings out Sarah’s flaws as well as her strengths. She is thoughtless enough to sneak the cat into a pet-free building without thinking about other people’s allergies. And she is weak-willed, unformed in certain ways as the film starts. The story has a strong subtext investigating her feelings about her father and unconscious search for replacement father figures; it’s a horror-thriller as bildungsroman, building to an overtly Freudian choice with an icepick.

The movie’s tone and visuals bring this out quite nicely. The film’s drenched with warm sunlight in its exterior shots, presenting a kind of warmth that echoes the self-image of the residents of the apartment block. Interiors of Sarah’s apartment emphasise bare white walls and wooden floors, the unyielding emptiness of unfurnished rooms. There’s a lovely moment early on as Sarah tries to sleep in her new apartment, which I think captures the dislocation of the experience of the first night in a new home. Conversely, later in the film all the homier scenes become unreal, as the rules and philosophy of the community become more detailed. The imagery of the building interiors ironically underscore the extreme rejection of the outer world and the unreality of the residents’ world-view, the willed aversion to external fact they push on Sarah.

It’s tempting, of course, to see this determined in-turning as a fable of America in these days. But there’s a more generally American and indeed Californian sense to the story: the film sees community as a stepping-stone to a cult, an inward-facing semi-communist group that shuns an outside world they consider dominated by atomised individualism. Locating horror in a too-close community draws on deep roots in American culture, I think (consider, say, The Crucible), and this horrific community also echoes the history of Californian cult groups.

In particular the architecture of the apartment building strikes me as Californian: not a high-rise, but a block built around a central courtyard. The shape of the place reflects how the community works. The outer world’s kept at a distance from the open space where the collective meets and relaxes, a wombike space that resonates with Sarah’s personal state between childhood and full adulthood. The film challenges her to grow up, to reject the state of childhood, whether in relation to her biological father or to the people who want to take over that role and direct her life.

There is by extension a feminist angle to the film. The comparison between Sarah’s father and the community is made explicit a couple of times, and you see the point: to become her own person she must reject the male figures who believe they have the right to dominate her. Behind the ideology of the community is unstated patriarchy, and you notice that part of the role Sarah’s given in the community involves being taught to cook by another woman, who was introduced as a high-powered professional.

This is a thematically dense story, then, and one that satisfies because of that — because character and character development’s linked to thematic development, without being mechanical. On a practical issue, there are plausibility issues; you wonder how likely a community such as the film imagines could survive undetected by others (all these tenants have jobs). And the most extreme moments of physical torture seem underplayed, not in their long-term implications but in the amount of pain Sarah expresses. But the movie’s short, only 90 minutes, and the fact that the ideas are so strong keeps you from thinking too hard about the practicality of what you’re seeing. You’ve got enough other things to think about.

It’s not that the themes are obtrusive. You can watch the movie without thinking about the deeper implications. But I’d argue that any story gains from having multiple layers which harmonise with each other; even if you don’t consciously notice them, or care to dwell on them, the fact that they’re there gives a sense of depth that unconsciously gives you satisfaction. In this case, I think Marmor’s thought about what he’s doing and let his film be informed not just by one theme but by several related themes, which all feed into the journey of his lead character. It makes for a satisfying and disturbing work. I’m sorry I missed it last year, but glad I gave it a try in 2020.