Algis Budry’s 1960 novel Rogue Moon is an unusual book. It’s relatively short, even for SF novels of its era. It’s heavily character focused. And while it deals with a fascinating mystery concerning an alien artifact, on the Moon, it’s also about the bureaucracy behind the scientists and engineers, and as much about how different kinds of men react differently to the challenges of life and the inevitability of death. The story also features two women, who use analogous means to get what they want.

There are two central science fictional premises. First, humans deal with a kind of alien strangeness that cannot be comprehended, and which in this case is usually deadly. Second is the consideration of the implications of a matter transmission device, an idea treated casually in most SF (especially in Star Trek), but that raises profound concerns about matters of the “soul” or, setting that notion aside, the consequences of simple duplication. (James Blish, to his credit as transcriber of Star Trek episodes, took on this question in his one original Trek novel, Spock Must Die! (1970).)

A mysterious alien artifact has been found on the moon, and two men, one an introspective but determined scientist, the other a reckless daredevil, cooperate to discover a path through the labyrinth inside.

This is both a traditional science fiction story about a problem and its resolution, involving alien mysteries and the consequences of matter transmission, and a sober meditation on life and death, on how different kinds of men and women deal with them. The novel is eccentric, and unique. 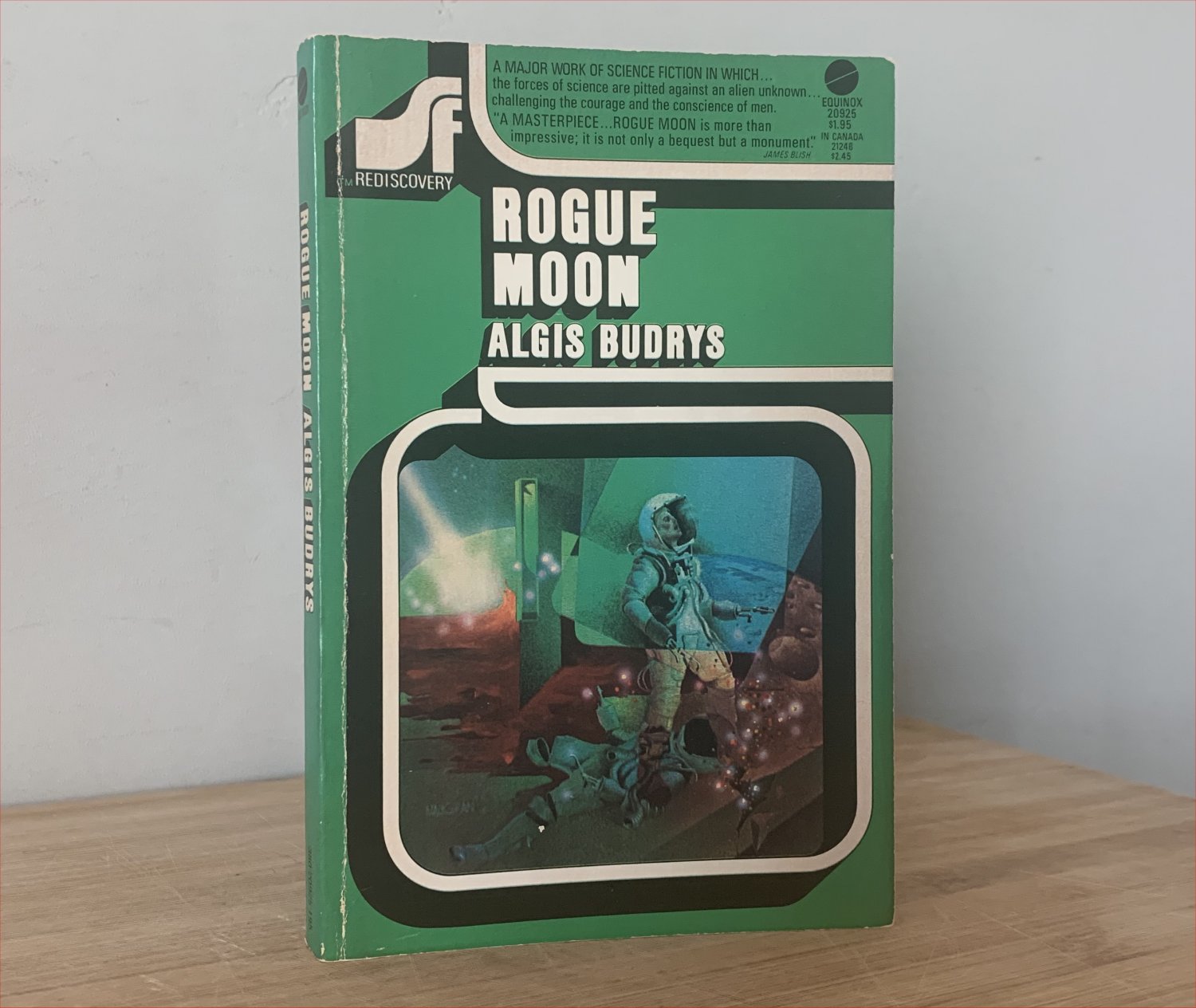 The narrative breaks cleanly into nine chapters, each broken down (and subnumbered) into a series of scenes, though some chapters are much longer than others (the shorter ones being character introspectives). Page references are to the Avon Equinox edition shown above.

One of the alternate titles of this story was “The Death Machine,” which of course applies both to the alien artifact and to the matter transmitter. The end is about two different kinds of men confronting death. One is gung-ho, determined to survive whatever the risks; the other is the careful, cautious scientist, who understands and accepts the situation, to the point that his original leaves his lab copy a note about Elizabeth. Both men, having survived the labyrinth, have experienced many things that might have killed them, but as in life in general, death always awaits eventually.

The two women, Elizabeth and Claire, on the other hand, deal with understanding their men, and in their different ways, succeed. The distinction between the concerns of men, and those of women, is clearly sexist, but it reflects the era, and virtually all SF of 60 years ago.

The bureaucratic background of this book reminds me of an almost forgotten Budrys novella from 1975, “The Silent Eyes of Time,” which despite a couple award nominations and one reprint in Terry Carr’s annual the next year, has never (except for one 1979 German anthology) been reprinted since, not even in a Budrys collection. (I found this online review, by “Jesse,” that refreshed my memory of the story, which I haven’t reread since 1975.) Presumably both of these stories reflect the contingencies of Budrys’ day job, but that’s only speculation. 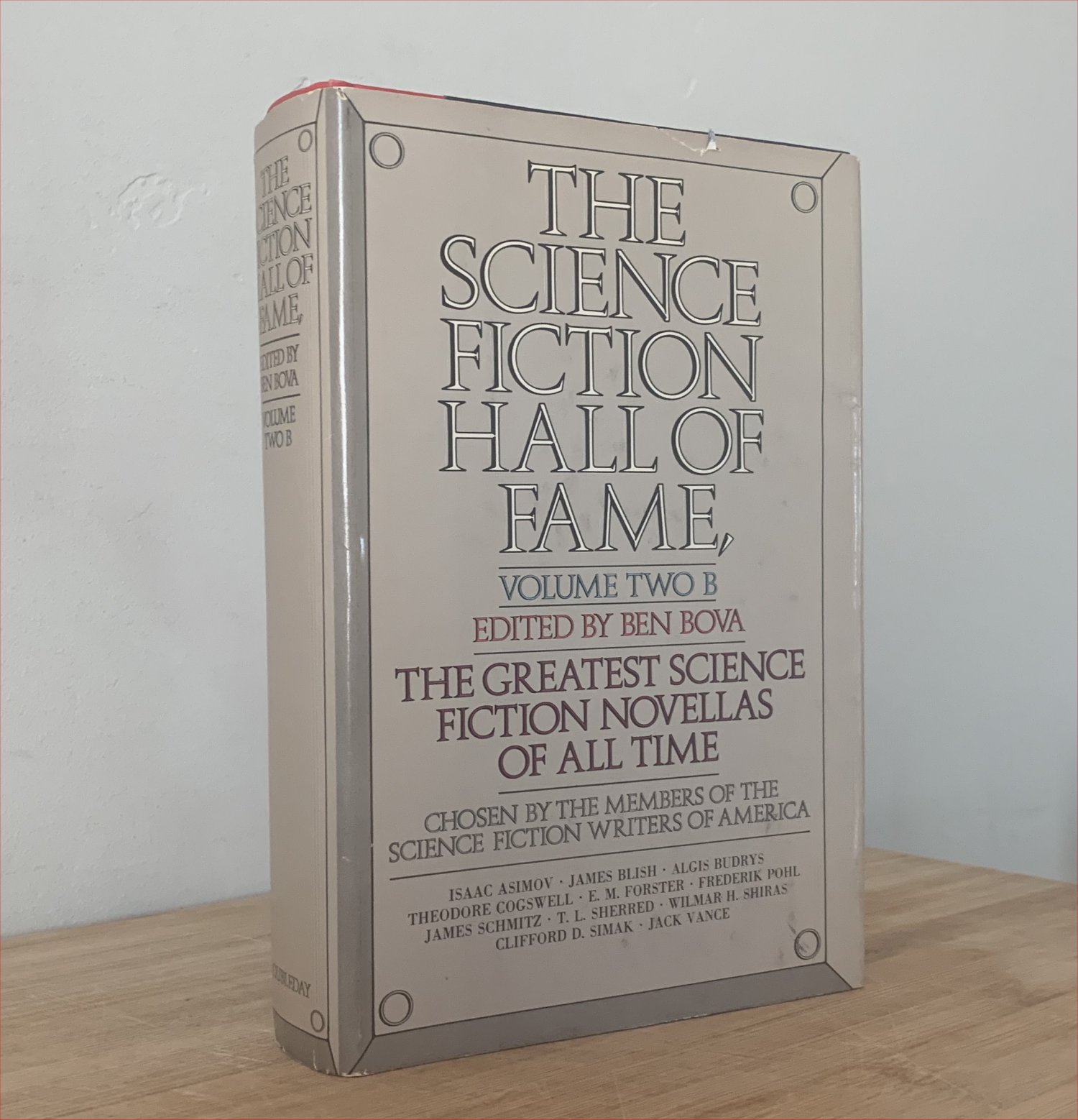 After finishing the above summary, and comments, I recalled that the story was first published as a novella, and tracked it down. It was published in the December 1960 issue of F&SF, then reprinted in a French magazine in 1963 (via Isfdb). Its only unique anthology appearance was in The Science Fiction Hall of Fame, Volume Two B, edited by Ben Bova and shown above; there have been no other English language reprints aside from later editions of that book.

In the book club edition that I have of the Hall of Fame, the novella is 90 pages of small type, while the Avon Equinox edition of the novel runs 192 pages of larger type. So the book isn’t twice as long as the novella; maybe 1/3 again as long.

Without comparing the two versions page by page, I satisfied myself that the structure and incidents of both versions are the same. There are some wording changes, paragraph break adjustments, and expansions of numerous speeches.

What about the some of the scenes I noted above?

If these examples are typical of what a more thorough comparison might reveal… I’m inclined to think the tighter novella version is the better one.

Mark R. Kelly’s last review for us was of Arthur C. Clarke’s A Fall of Moondust and Earthlight. Mark wrote short fiction reviews for Locus Magazine from 1987 to 2001, and is the founder of the Locus Online website, for which he won a Hugo Award in 2002. He established the Science Fiction Awards Database at sfadb.com. He is a retired aerospace software engineer who lived for decades in Southern California before moving to the Bay Area in 2015. Find more of his thoughts at Views from Crestmont Drive, which has this index of Black Gate reviews posted so far.

Before retiring, I taught a sophomore-level university course, Intro to Literature, into which I introduced two weeks on science fiction, with the novella of “Rogue Moon” as one of the longer works (the other was the Moore-Kuttner “Vintage Season”). The Budrys is an outstanding example of sf dealing with the alien and incomprehensible, and it shows how well sf can lend itself to an existentialist philosophy — I think; not being an existentialist myself. It’s long enough ago that I wouldn’t be prepared to offer any specific observations about classroom response.

James Blish much admired THE DEATH MACHINE/ROGUE MOON, so his dealing with transporters in SMD, which I haven’t read, is not surprising. Blish also suggested that the novella form was not nearly the work the novel was. See his chapter in MORE ISSUES AT HAND, iirc, and Budrys noted later that Blish might’ve given him too much credit, but I’d suggest not too too much. Blish’s notion that all the characters are essentially functionally insane seems sound. A literature professor I lent a copy to thought it was a not-bad example of hardboiled writing, but little more…which I though an interesting response…it does depend to some extent on a grounding in sf, I think, which does tend to limit it audience…and perhaps is part of why Fawcett Gold Medal was Budrys’s primary book publisher for some years.

Apologies for typos above! My typing fingers are as tired as the rest of me.

I’ve made it a point not to “research” these older books, but to respond to them at face value. But perhaps I should do at least some basic fact checking, to avoid my error here of concluding that the novel was a (perhaps unnecessary) expansion of the novella. I have the Blish and Knight books, of course, and many more references besides.