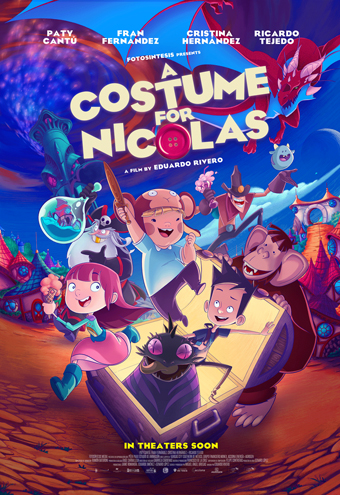 Critic Farah Mendlesohn introduced the term ‘portal fantasy’ in her 2008 book Rhetorics of Fantasy to describe stories in which a protagonist leaves their home and enters a new, larger, magical world. I’ve seen the term used often to refer to a specific subtype of these fantasies, in which a protagonist from conventional reality passes through a portal to a fictional realm and proceeds to quest about and have adventures. The rise of this more specific definition is not entirely surprising, given how common that kind of story is, perhaps especially with younger protagonists. Either sort of portal fantasy can present a character, confronted with a new and strange world, with an opportunity to grow and change. Or, instead, can be about reification of the character’s previous identity — a locking-in of who they are, after the success of a quest that aims to stop a bad change form occurring.

Such is A Costume For Nicolas, an animated film from Mexico. It’s directed by Eduardo Rivero and written by Miguel Uriegas, based on the book Pablo y El Baúl by Jaime Mijares (there’s an English version and a Spanish version, Un Disfraz para Nicolas; Fantasia presented the English version). The studio that made it, Fotosintesis Media, has a mission to create positive “social impact,” and so this film is a fantasy following Nicolas, a young boy with Down syndrome, voiced by a young actor with Down syndrome, Fran Fernández.

The condition’s not named onscreen, but informs the character: 10-year-old Nicolas is who he is, a happy child raised by his mother (voice of pop star Paty Cantú), who makes him costumes and tells him stories about a fantasyland where a powerful but mysterious wizard dispelled nightmares at a high cost. When Nicolas must go to live with his grandparents and his cousin David, he not only has to fit in at a new home and a new school, he also must stop the monster feeding on David’s nightmares — which leads both boys into the fantasy world of Nicolas’ mother’s stories. There, his costumes become a magic which gives them a hope of completing a quest to save the world and free David from nightmare.

It’s a lovely film that fundamentally works. It’s colourful and imaginative, the 2D animation always bright and energetic. The designs are excellent, particularly in the fantasyworld with its castles and magic. The human characters are good pieces of design, too, with expressive faces and figures a little like the adult humans of Calvin & Hobbes.

The story’s a little oddly structured, in that it’s a bit slow to get to the fantasyworld, and once it does it takes place almost entirely in that other realm. In other words, it doesn’t try to balance the two realities. But this works surprisingly well — Rivero and Uriegas perhaps understand that once we get fully into a story’s fantasy world, returning to a mimetic world can be a hard sell. The delayed gratification of the fantasy here may be tough for young children, clearly the primary audience of the film, who must wait for the really wondrous parts. But then again, it also means the film builds to its most spectacular moments, giving us a chance to get used to its visual style and to live with the characters. 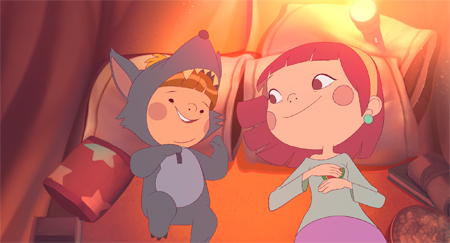 Who are engaging and fun to follow. Nicolas in particular is a fine protagonist, cheerful and always upbeat. He’s resourceful and good-hearted, much as you’d want in a good quest hero. His disability is part of who he is, but not the whole of him or even perhaps the most important part.

He moves through a world of pirates and cowboys and talking skeletons, with humour and danger and thrills, and it’s a story that (I imagine) should be entertaining for kids 10 or less. The reason for the disappearance of Nicolas’ mother is never specified, though her death seems to be assumed, but there’s little time spent on grief. The movie knows what it wants to focus on, and does. Further, it does a good job of creating suspense without feeling too threatening; and of keeping us interested in Nicolas and giving him some interiority without showing him defeated or too terribly frightened.

That’s a particularly good balance to find because the film’s got a lot to do with nightmares and with facing your fears. Nicolas’ costumes are ways to do this, and the way they’re echoed in the fantasy realm is elegant. As the film points out, costumes can be used to hide character or reveal it, and here they’re revelatory in a good way. 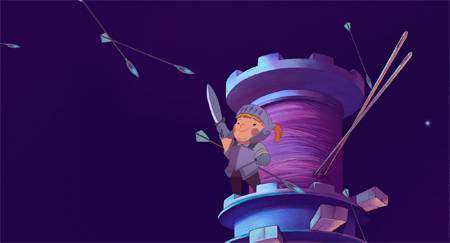 Nicolas doesn’t change much as the film goes along, but this is less of a flaw than it sounds. There’s interest in watching this intrepid child find his way in to a fantasy world, interest in the gallery of characters he encounters there, interest in the quest he undertakes. That quest is about preserving something, not about changing something. Usually the story of a child going out into the wider world, any world, is a coming-of-age story that centres the change that character undergoes. That is not the case here. Nicolas does not change, and does not have the opportunity to refuse change, but by being himself has the chance to help others and bring a good end to their story. And that’s enough.

The world Nicolas finds is a world about him. He’s at the heart of it, and the ending reflects that — it’s a strong affirmation of who he is, unsubtle but touching. This kind of dual-world fantasy often uses a convention that the fantasy world the protagonist explores reflects the themes of the story in the realer world from which they emerge, and that’s certainly the case here. The fantasy world is a world in which Nicolas’ story takes on a new dimension, and one which allows him to shine as a charming fantasy hero. This is not a story that’s challenging in the usual sense, but that’s fine. Some stories gain by being affirmations, and this is one of those.