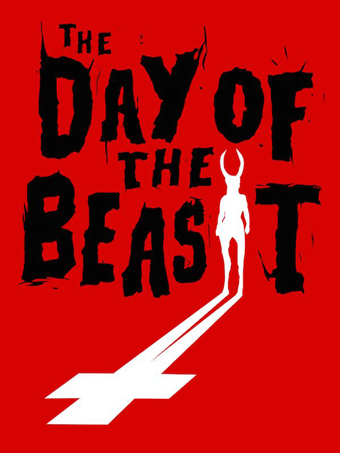 Yesterday I wrote about a horror-comedy that worked because it found a strong balance between its horror and its comedy, while deriving both tones naturally from its characters. The movie I watched after that one was also a horror-comedy. But it was less successful.

The Day of the Beast (El día de la Bestia) was released in 1995, and has a 4K restoration on the way from the fine people at Severin Films. Directed by Álex de la Iglesia, and written by de la Iglesia with Jorge Guerricaechevarría, it follows a mild-mannered Spanish priest, Ángel (Álex Angulo). He’s cracked the secret code of the Book of Revelations, and worked out that the Antichrist will be born on Christmas Day. But he’s not sure where. So he’s decided to catch the attention of Satan, by committing all the sins he can think of. He’ll then sell his soul to learn where the Antichrist is being born, and go there to kill the infant. (Presumably, if you’ve gotten to the point of selling your soul to Satan, infanticide becomes a triviality.)

It all works very well for the first half of the film. Ángel’s plan is a ramshackle bit of plotting, but it works to get across the basic comedic idea of a cloistered man who doesn’t understand sin very well trying to be evil. Thanks to Angulo’s performance the movie gets a lot of mileage out of meek Ángel being bad, and on top of that the secondary characters are sketeched in with verve and originality. De Razza’s arrogant psychic makes for a good contrast with Ángel, and the way he’s set up and brought into the film works well.

Unfortunately, the movie then switches gears for the second half. It doesn’t really become a straight-ahead horror film as the first half occasionally hinted, though. It instead becomes something of an action movie, starting with an extended sequence in which the film’s leads escape from an apartment building. Various running-around ensues, none of which is particularly interesting, and the movie concludes with a sequence in which the leads are irrelevant to the working-out of the story. (You can almost see a parody of the visitation of the Magi, if you squint, but for no obvious purpose.) 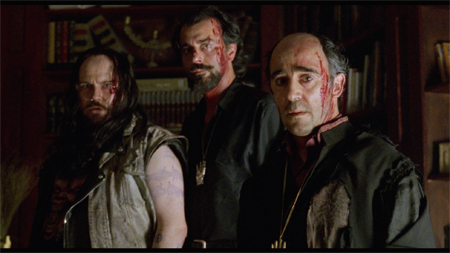 This movie does not have the option of building its horror and humour out of its characters, simply because the characters are all caricatures. But they’re interesting enough caricatures that the humour in the first half develops naturally out of the situations into which they stumble. The performers, I think, understand what tone to go for, and manage it quite well — especially in the physical comedy and general presence of Angulo. But it’s a difficult task to fit caricatures into a horror story. Not impossible, but tricky. Day of the Beast doesn’t try.

Which is fine, but rather than try to explore the caricatures as caricatures, rather than try to work out new situations to extend the story, the film lets its plot take over. It turns into a series of uninteresting payoffs to setups, and the mystery element of the story takes centre stage. That’s probably the least interesting aspect of the first half, but to resolve it the film decides to shed its humour and send the characters through an assortment of set-pieces and investigations. Many of the more interesting secondary characters are abandoned. So is Ángel’s plan to sell his soul to Satan. The movie becomes a straightforward exercise in the characters trying to figure out where to go, without thinking about what they’re going to do when they get there. Despite which, the film tries — too late — to develop its leads as rounded characters. But their fundamental cartooniness means there’s never a sense that they’re acting from a real interiority. 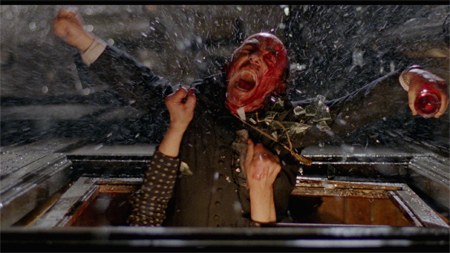 It feels as though the movie becomes unsure of itself. Rather than continue to mine terrain that’s producing good results, it tries to fit itself into a more conventional form, losing much of its charm in the process. More than that, it doesn’t handle the conventional form well — the action bits are unengaging, the mystery bit isn’t a proper mystery, the attempt to divide the characters and then bring them and their stories together again merely feels contrived. And after all that, the characters do nothing to shape the conclusion.

I note that the Fantasia program notes used the word ‘esperpento’ in describing this film. That’s an approach in Spanish literature I know very little about; from what I’ve learned it was started in the early 20th century by Ramón del Valle-Inclán, literally means “horrible, nauseating persons, or things,” and in a literary sense refers to stories that distort reality and present warped images of classic heroes. You can certainly see that in this movie, but again that’s more obvious in the first half. There’s a grotesquerie present early on that becomes more streamlined. And the characters become more conventionally heroic, not less. It’s a useful indicator of what the movie was trying for; but it never pulls it off.

There are some elements to The Day of the Beast that could have been developed into a strong social satire. Or indeed could have been developed into a wry comedy. As it stands, neither comes to pass. A slightly ramshackle plot in the first half grows into positive incoherence in the second. The ingredients are here for a good movie, and for a while it looks like it’ll be a strong if flawed film. But it abruptly runs out of energy at the same time it forgets what kind of a movie it is. It’s unusual to see a film that establishes such a distinct identity so well in the first half and then turns away from that identity in the second. But there it is.