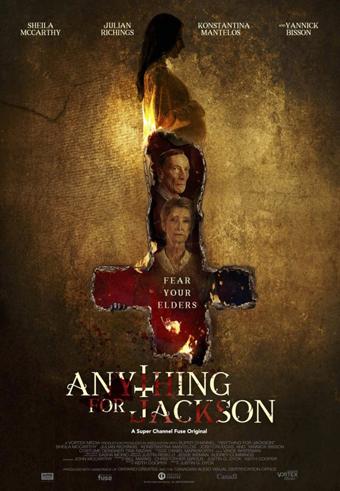 Macbeth is one of the earliest true horror stories, in the sense of a story whose main aim is to play with the emotion of fear, and there’s a notable comic-relief scene with a gatekeeper right after the first gruesome murder. That scene became the subject of a famous essay by Thomas de Quincey arguing (roughly) that the horror’s made greater by contrast. So from the point where horror first began to emerge as a genre, storytellers have been conscious of the effect that comes from balancing horror with the everyday, and even with the comedic.

Which was in my mind on the next-to-last-day of the 2020 Fantasia Festival, which began for me with two horror-comedies. The first was a Canadian film called Anything For Jackson, which looked like it would lean more to the horror aspect. More precisely, it looked a little like Rosemary’s Baby, only in this case perhaps intentionally funny and maybe actually scary.

Directed by Justin Dyck and written by Keith Cooper, it stars Julian Richings and Sheila McCarthy as Henry and Audrey Walsh, an elderly couple still mourning the death of their daughter and her young son Jackson. As the movie opens, they’ve abducted a young pregnant woman, Becker (Konstantina Mantelos), a patient of Henry, an obstetrician. Henry and Audrey have an evil ritual that will implant Jackson’s soul in Becker’s child’s body. Whether Becker likes it or not. Becker doesn’t want a child and doesn’t want an abortion, but she also doesn’t want this. Yet her attempts to escape are only one of the complications and challenges the Walshes encounter.

This movie works because Dyck and Cooper nail the tonal balance of the horror and the comedy. The first shot is a long take, about two and a half minutes, of a nice slightly dotty older couple going about their morning routine and then abducting a terrified young woman. The shift from gentle comedy to something deeply wrong is managed well, and the movie consistently gets that shift right not only from scene to scene but within a scene as well. The pacing and the scripting are exactly right in exactly the ways they have to be.

The film looks nice, too, colours muted and shadows thick. Winter snow echoes the emotional coldness underlying the story, and emphasises the Walshes’ home as both a place of confinement and a kind of sanctuary (for the Walshes). But over the course of the film horror imagery grows, as the Walshes experiment with the Satanic text they’ve found — possibly the oldest book in the world, we’re told — and more and more innocents stumble into the story.

What really anchors the film, I think, are the performances. The supporting cast is fine with gusts to excellent — most notable Yannick Bisson, Detective William Murdoch himself, as an oddly cheerful handyman — but the standouts here are Richings and McCarthy. Both are well-established Canadian actors, and not only do they work well with each other both of them consistently get the balance of fear and humour right. There’s a moment, for example, where Audrey sits down by Becker and in a no-nonsense thought-through way uses her phone to set up a fake social media trail to give the authorities someone to investigate. And then stops, puzzling over what the acronym DTF means. It’s a cute moment that feels of a piece with the whole scene; it’s a character-based moment in a character-driven scene, and the whole movie plays out like that — character first, finding both laughs and horror in who the people at the centre of the film are.

And who those people are also becomes the theme of the film. Henry and Audrey are nice well-intentioned people who are quite wealthy. And so as they go about their plans to bring back their grandson, they don’t think of themselves as evil — even when they kidnap a young woman, even when deaths start to mount. They want Jackson back, and will do anything to make it so, and other people really don’t matter as much as he does. The horror of the movie, the wickedness in it, is the willingness of the rich to treat other people as means rather than as ends. And their inability to see evil as being evil.

There’s also perhaps a sub-theme of people trapped by history. The Walshes can’t move on from Jackson’s death, so the promise of new life is warped by an attempt to raise a ghost. And there are certainly other ghosts in the film as well; lots of old evil returning. It perhaps means something, then, that the age of the book is emphasised.

More surprising, from a movie with a cast so clearly Canadian and a seasonal setting in a winter of deep snows, is that the stpry’s set in the United States. It’s not obtrusive, necessarily, but the way Henry and Becker discuss abortion in a flashback scene and a reference to a clinic “out of state” firmly places the movie in the US. It’s a little hard to see what the film gains by doing this. A different attitude to abortion, maybe, legally if nothing else. Perhaps the theme of privilege becomes a little more pointed, although it’s not as though that’s an issue absent in Canada.

There’s not much else I found baffling or flawed in the film. The climax was arguably a bit confused, with certain things resolved offstage, and the final shot was debatable. But overall the movie works, because it consistently gets the balance of humour and horror right. And that comes from an understanding of its characters, a presentation of two human people in human pain who don’t know where they should draw the line at ending that pain. Henry and Audrey are real, and faintly ridiculous in a gentle way, and also members of an upper class that doesn’t quite grasp that other people are as human as they are. Which means that Anything For Jackson also balances a mockery of the rich with terror of their power. These are people that you can imagine meeting, and there’s a quite real horror in their lack of self-awareness.