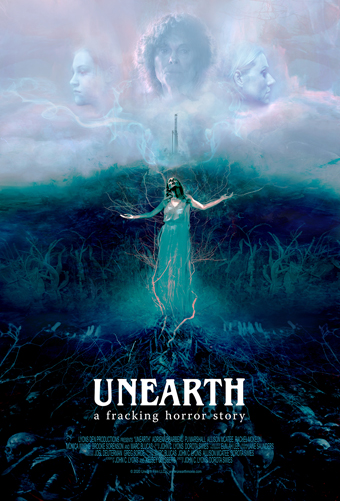 There’s an old line that says science fiction literalises metaphors. It’s a line that applies to fantasy and horror, too. It means that, for example, a realist book may say that somebody walking through their old house is haunted by memories like the ghosts of their past, while a horror story might have that person be actually haunted by an actual ghost representing that past. What is metaphor in one case is literal in the other. But still a metaphor, as well, still symbolising something more than itself. Part of the trick of writing stories of the fantastic is knowing how to handle the metaphorical and the literal — knowing exactly how literal to make the literalised metaphor, and how to explore what literalising the metaphor brings the story, and how to explore the metaphor as metaphor while keeping it a literal thing.

All of which came to mind when I saw Unearth on the start of the eleventh day of the Fantasia Film Festival. The movie was directed by John C. Lyons and Dorota Swies from a script by Lyons and Kelsey Goldberg, and it’s concerned with industry coming into a small town and unloosing something terrible. But it’s a slow build to get to a point that most horror movies would put up front, and by the time the horror emerges you wonder if it was really needed.

The film follows two families struggling to make ends meet, one a farming family headed by matriarch Kathryn Dolan (Adrienne Barbeau), the other by garage owner George Lomack (Marc Blucas). The first act of the film introduces us to the Dolans and Lomacks and shows us their hopes and dreams being strangled by poverty, so that we understand why George is ready to lease his land to an oil company. The company moves in and starts a fracking operation, causing the environment to degrade rapidly. And then something worse is disturbed.

But that something worse does not become obvious until over an hour into a 94-minute movie. When it does, it pays off some hints and imagery from earlier in the film. But those hints have been so subtle it takes a while even after the horror really emerges to understand what it is we’re seeing.

For much of the movie, in fact, it looks like the oil company and perhaps capitalism in general are the monsters. The oil company emissary offers a sinister deal to various characters, preying upon the weakest and least able to resist. After the evil deal’s made, the surroundings become a hell. This is barely a metaphor; the need for money and the corruption of the land make the oil company, distant and untouchable, a demonic force.

But then, after an hour of an intriguing balance between the metaphorical and the literal, the literally horrific takes over. This concluding part of the film is strong enough, paying off of the relationships and hopes and fears we’ve seen earlier, but in context is necessarily disappointing. The horror element has been set up, but not enough. Paradoxically, it’s also too obvious, forcing to the surface tensions that had been subtextual. So it feels unneeded; a few tweaks in dialogue could have set up the oil company as a purely metaphorical monster, and the film could have played out as a horror movie much as it already does, with a different ending in which violence emerges purely from the pressures of human character.

But that is not the film that was made, for better or worse, and what is here certainly has strong aspects to it. To start with, it’s lovely to look at. The images of nature are profound (it was apparently shot in northern Pennsylvania), from the quiet lake at dawn that opens the film to the deeps of a forest to fields of corn taller than a human head. All this gets across a sense of sanctity to the land, which is literally undermined by the oil company. And there’s a strong use of darkness, not merely in shadows but in a general dimness and highly textured quality to the light. Visually, there’s a kind of horror-film palette that creates a brooding atmosphere and sense of expectation that does help bind the last third or so of the movie to the rest.

The characters are developed effectively, given individual dreams, and individualised relationships with each other. Individual histories with each other, too, which comes out in the acting. You believe these are people who have known each other all their lives, who are neighbours, who maybe have ongoing quarrels but know how to set them aside. I was struck by the fact that, whether it’s intended or not, the characters’ desires felt less vivid the more they looked beyond survival and working the land. For example, Allison McAtee’s Christina Dolan hopes to become a photographer, and while that’s an interesting idea it never really comes into focus — she never gets to talk about her photography as a photographer would, in artistic or technical terms, and so it’s difficult to view her in that context.

Still, the weakest elements to the film are probably to do with the literal horror of the last third. There’s one character who’s unaffected by what comes out of the drilling, and it would have helped to understand why. The movie jumps ahead for its final shots to imply larger and sinister events to follow — but I didn’t understand what happened to the oil company, or whether anybody had investigated the violent events I’d just seen, or generally how to parse the connection with the preceding film.

It emphasised the general structural peculiarity of the movie. There are parts of two good movies here that are very similar to each other, but that together don’t quite make a single coherent whole. It’s a film that falls between literalising its metaphor and letting it work purely as metaphor. I personally think it would have been better if it had taken the second path; the movie would have done something really unusual, telling a horror story in which the horror is business-as-usual. The visual vocabulary’s there, and quite strong. But bringing out an actual horrific aspect actually weakened the overall story. Unearth is still an interesting film, but it could have been rather more.