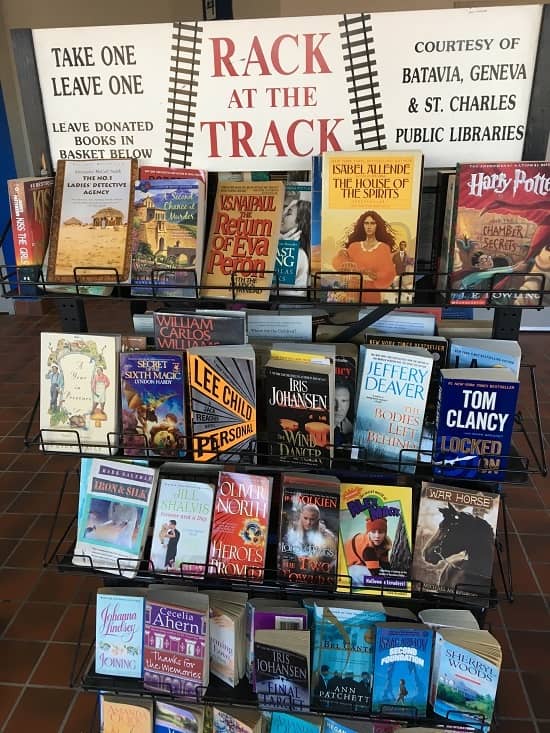 In my Vintage Treasures posts, I like to talk about paperback fantasy that’s been out of print for decades. Books you’re not going to find without a search, but which are worth it all the same. Hopefully I intrigue a few of you lot to search out some of those books every week, and sample authors and titles you might not have discovered otherwise.  The idea is encourage readers to try something that’s given me enormous pleasure for most of my life: tracking down and shelling out a couple bucks for vintage paperbacks.

Of course, when you find them on a giveaway rack at your local train station, you don’t need me to tell you what to do. So today I want to talk about The Water of the Wondrous Isles by William Morris, which I found in the Take One Leave One paperback rack at the Geneva train station last year.

What exactly do you leave in exchange for a nearly 50-year old (and highly collectible) paperback, volume #38 in Lin Carter’s famous (and highly collectible) Ballantine Adult Fantasy line? I have no idea. But I stood in front that rack for a good five minutes, struggling with that question as commuters milled around me. Finally I put the book in my pocket, and returned the next day with half a dozen brand new paperbacks. I quietly tucked them into the racks, knowing I got by far the better deal. But sometimes you just have to accept what the universe has gifted you and not question it.

The Water of the Wondrous Isles by William Morris (Ballantine Books, 1971). Cover by Gervasio Gallardo

According to Wikipedia, William Morris was “one of the most significant cultural figures of Victorian Britain,” best known as a poet and for his textile designs and wallpaper. Lin Carter, sharp-eyed in his appreciation of British fantasy, also considered him a major early fantasy author, and reprinted no less than five of his works in the groundbreaking Ballantine Adult Fantasy line — returning most of them to print for the first time in decades.

The Water of the Wondrous Isles is rare in Victorian fiction in that it is an epic fantasy with a female protagonist. It’s the tale of Birdalone, stolen as a baby from her weaver mother by a powerful and enigmatic witch, raised in the wood of Evilshaw, and guided by a lookalike fairy godmother, Habundia. Wandering around nude (which I can safely point out is another rarity for Victorian fiction), she discovers three maidens imprisoned by another witch, the three paladins of the Castle of the Quest, a magical boat, and the strange Isle of Increase Unsought, an island cursed with boundless production, among many other fairytale-like wonders.

The book still finds eager readers today, and enjoys a 4.01 rating at Goodreads. Here’s an excerpt from an insightful 4-star Goodreads review by Dominick.

C. S. Lewis is quoted on the back cover, which is utterly unsurprising. Morris’s influence on Lewis (and for that matter Tolkien) ought to be immediately apparent to anyone who has read both. Morris is arguably the originator of what evolved into twentieth-century high fantasy literature, with books like this one. Morris here combines elements of fairy tale (witches, literal fairies) with the conceits of medieval romance (complete with a sort of cod medieval diction and language, that mostly works well) and hints of allegory, or at least allusiveness… There’s a lot more complex psychology — and sex — that one would expect either in a nineteenth-century novel or in high fantasy, at least as it evolved in writers such as Lewis and Tolkien, who may have owed huge debts to Morris but consistently eschew this one aspect of his work… this is a fascinating book that I think anyone seriously interested in heroic fantasy would find worth a look.

The Water of the Wondrous Isles was originally published in 1897, and reprinted by Ballantine Books in 1971. It is 381 pages, priced at $1.25. The wraparound cover is by Gervasio Gallardo.

See all our recent Vintage Treasures here. And keep an eye out for Book Exchange racks, won’t you? You never know what you’ll find.

Wow! Truth really is stranger than fiction. I can’t believe someone would leave that. What condition was it in?

You took that but didn’t take the movie photo cover Lord of the Rings and the book written by Tom Clancy’s corpse?

We’re very different people, you and I …

> I can’t believe someone would leave that. What condition was it in?

Excellent. I scanned it for the cover images above, so you can see for yourself. Other than a spine crease and some bumping on the bottom right, it’s in fine shape.

The thing I wonder is, how long was it there? I founded it buried near the bottom row, so it could have been there for ages.

> You took that but didn’t take the movie photo cover Lord of the Rings
> and the book written by Tom Clancy’s corpse?

LOL. I admit I was tempted by Secret of the Sixth Magic, but it was a little too battered. I might have pocketed that brand new copy of Second Foundation though….

I thought that was just a generic book cover picture. That is truly a remarkable find.