Heroic Fantasy Quarterly #45 was released on an unsuspecting world on the second of August. Four works of fiction, one outstanding poem, plus artwork and audio. A great issue that you should check out!

What have we got? This is what we’ve got:

Assailing the Garden of Pleasure, by Danial Ausema, with audio by Karen Bovenmeyer. The wounded apprentices of a corrupt teacher must gather what little power and skill they have to attempt to wrest the stolen parts of themselves from their corrupt master. The mastery of sorcery exacts a price. The search for vengeance exacts an even greater one.

Fox Hunt, by Rebecca Buchanan, with artwork by Simon Walpole and audio by Karen Bovenmeyer. There is a horror worming its way into the world of feudal Japan in this outstanding story. No bold samurai or powerful sorcerer fights against it — only a lone foxkin and a willful old woman stands in its way. A unique tale! 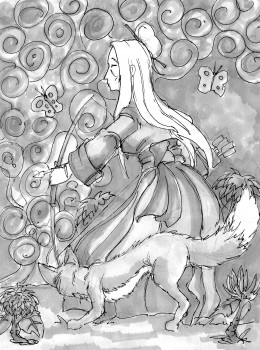 Instrument of Vengeance, by Howard Andrew Jones with artwork by Darian Jones. The clever Dabir and his bodyguard Asim are on the case! When a young musician’s enchanted oud is stolen the duo delve into a world of deceit, smoldering resentments, and rumored curses. An investigation that takes them through the seedier side of Mosul, and the seedier side of human nature. 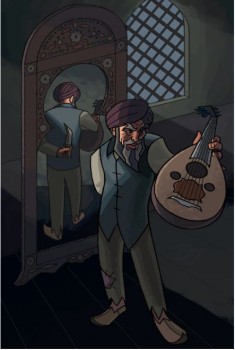 Apples of the Gods, by Jane Dougherty. When the goddess Idunn is kidnapped from Asgard by the giant Thjazi she gets her first true glimpse of the world beyond the walls of Asgard and discovers things are not quite what she was led to believe. A cynical tale for cynical times!

Owain the Red at the Castell Dolbadarn , by Nicole Sellers with artwork by Simon Walpole. An old Scottish legend re-told in poetry. Vengeance and murder in the highlands! 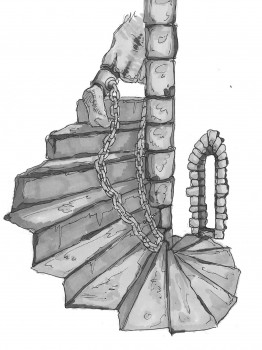 I’m looking forward to the Dabir & Asim story, as well as the poem!

Adrian, i’ve looked all over the website (and just had a good laugh reading the submission guidelines.) But i can’t find an email list to get updated when a new issue drops.

I second Glenn – very keen to read some more Dabir and Asim. My last taste of them was Bones of the Old Ones.

Glenn, Tony, sadly we only have that one Dabir and Asim story, but we have another excellent story by Howard Jones: “A Stone’s Throw”– with an audio version, even!

Glenn, we don’t actually have an email list! We update in November, February, May, and August. We try to get the word out on Facebook and Black Gate, and we definitely send out the word to our patrons on Patreon.