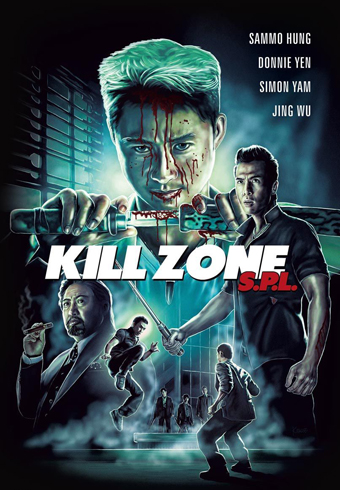 One of the lovely things about covering Fantasia is the chance to see genre classics I missed the first time around, often brought back to the screen in a restored version. Again in 2020, notwithstanding its streaming-only nature, Fantasia revived a number of great films from prior years. While my own inefficiency with scheduling meant I ended up missing Johnnie To’s A Hero Never Dies, I saw many of the others, including Wilson Yip’s 2005 movie SPL: Kill Zone (also just Kill Zone, originally SPL: Sha Po Lang, 殺破狼).

Written by Yip with Szeto Kam-Yuen and Jack Ng, it follows Hong Kong cop Detective Chan (Simon Yam), who’s trying to settle a personal score by taking down mobster Wong Po before Chan retires. Unfortunately for Chan, Wong’s played by Sammo Hung. Unfortunately for Wong, the man about to take over from Chan, Ma, is played by Donnie Yen. Mayhem ensues.

Although, in truth, there’s a little less mayhem than you might expect. Yip leans strongly into the melodrama of the story, holding most of the fight scenes for later in the film. Chan’s our main character for the first part of the movie, building up our sympathy for him as we see Wong’s ruthlessness — but then after the introduction of Ma, we come to see things from Ma’s perspective, and we see how Chan’s obsession with Wong leads him not just to push boundaries but to shatter them entirely.

Chan leads a small unit of cops trying to get the goods on Wong; they get their hands on video tape that seems to incriminate him in a murder, but doesn’t tell quite the story they need it to tell. So they cheat, trying to use the tape to frame Wong, even if that means taking out witnesses who know the truth. The cops are dirty, and you understand why they’re dirty, but you’re not allowed to forget that they’re dirty.

This gives the story enough heft, enough moral complexity, that the melodrama becomes more interesting and the story becomes far more than a collection of set-pieces. Add to that some strong performances: Sammo Hung’s alternately sinister and sympathetic, while Donnie Yen gives a convincing portrayal as a basically decent man trying to decide what to do in a compromised world. Watching Yen, in fact, I found it hard not to think what it would have been like to see him as Superman at around that time — a forceful but good man, one who the audience is drawn to emphasise with due to a mixture of warmth and strength. On the other hand, Hung’s playing a fat crimelord who’s actually both a mass of muscle and a skilled martial artist, a man the cops can’t legally touch but whose weakness is the wife he truly loves, and who keeps a psychopathic-but-supremely-skilled assassin as his enforcer. Which is to say I no longer need to wonder what it’d be like to see him play Wilson Fisk. 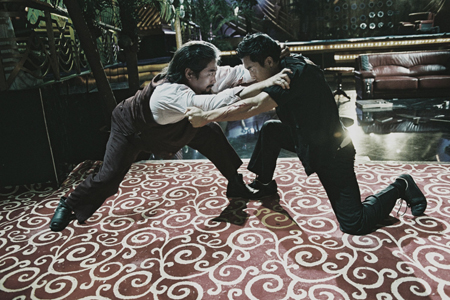 With all of this being said, SPL works as well as it does in large part because of the action. The major set-pieces take a while to come, but they’re full-value when they do, visually dynamic and inventive in structure. Each fight feels different, and — mark of a good action film — it’s difficult to predict the way they go and often even the final result. Wu Jing, playing Po’s knife-wielding assassin, is built up very nicely as a physical force who shapes the story but doesn’t unnecessarily complicate the character dynamics. The climax of the movie sends Yen through two successive extended fight scenes, and by the end of the second you’ve seen everything you wanted to see when you sat down to watch this film.

Donnie Yen handled the fight choreography for SPL; in 2005, when it came out, Yen was a well-established leading man in Hong Kong, as well as a director in his own right and a fight choreographer in films such as Blade II (in which he also had a minor acting role). SPL was one of the first movies in which he brought an influence from mixed martial arts into his choreography. It was also the first time he teamed up with Wilson Yip, with whom he’d later make the Ip Man series of films. (Two sequels to SPL have also come out, without most of the original cast, though the third was directed by Yip.)

It strikes me that the MMA aspects of the choreography, the leglocks and groundwork, work well in this film because they convey a sense of realism unusual for a martial-arts film. You think that if a Hong Kong cop really was to use advanced martial-arts techniques in their fights, it might look a bit like this. And that tracks with the overall feel of the film, narratively and visually. The story’s dark, and so’s the look of the movie. There’s almost an 80s Miami Vice aesthetic, with sodium-lit city streets and richly-appointed criminal lairs, somehow both credible and incredible: a heightened reality, but still something based on actual reality. Thus the look, thus the story, thus the fight. 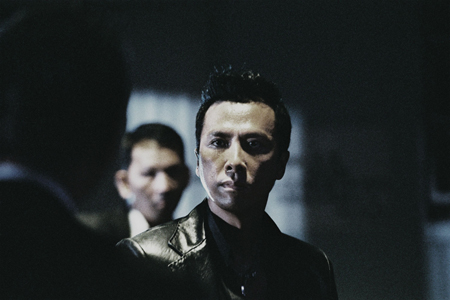 If part of the pleasure of watching a brand-new film is getting to see it before a critical consensus has formed, then part of the pleasure of watching a classic is not having to worry about the question ‘why does this work,’ only ‘why does this work so well.’ With SPL: Kill Zone, the answers are plentiful. There’s a solid story at the base. Good acting performances. And three master martial-artists — Wu Jing, then not yet 30 and in only his fourth film; Sammo Hung, an old veteran; and Donnie Yen, in his prime as a fighter, whose choreography would bring a new element to martial-arts films. Everything’s here, everything’s in place. This movie’s a superior example of its genre, and exactly what you want to watch when you want to watch this kind of thing.