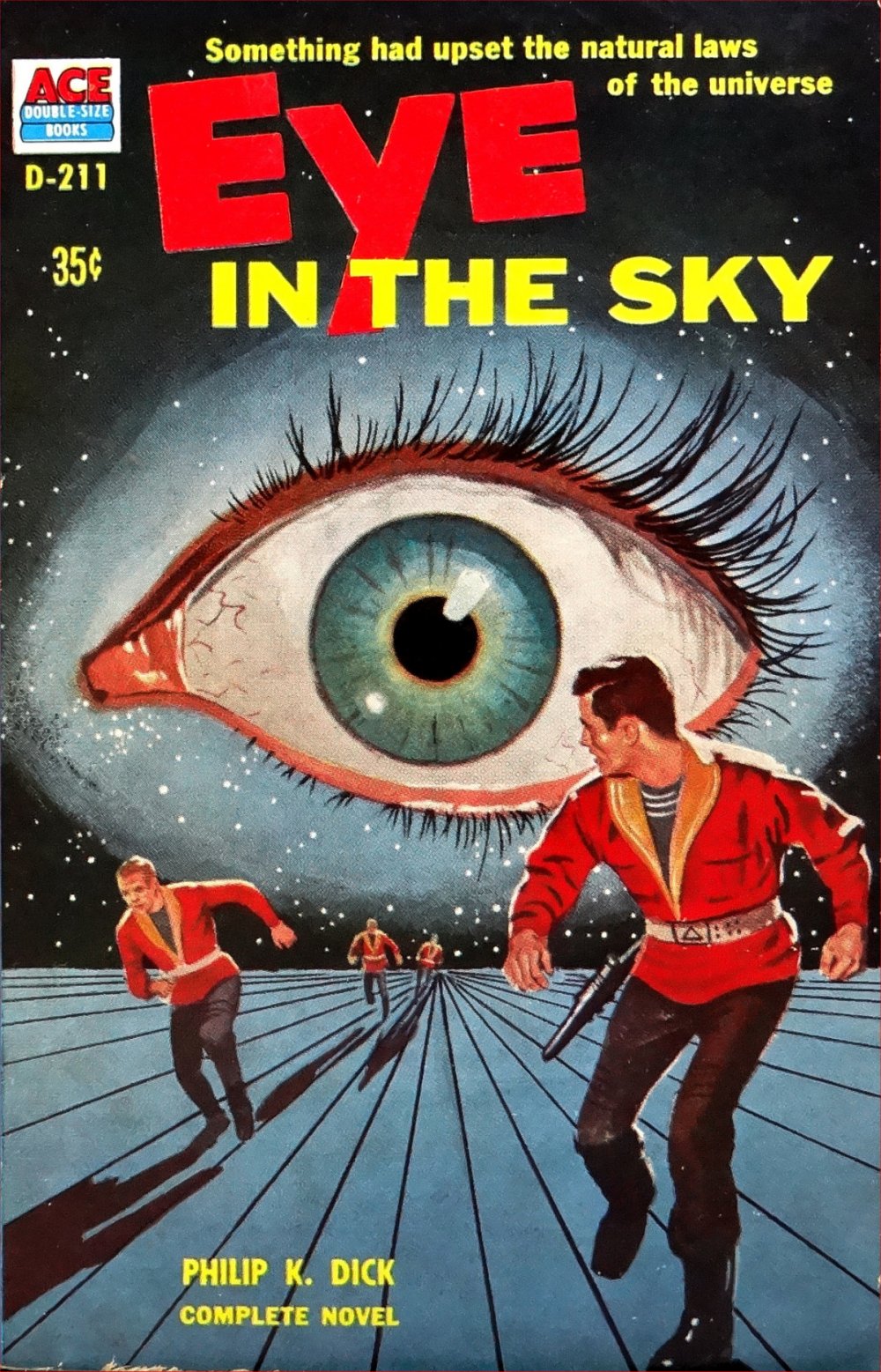 I confess I’ve never warmed to Philip K. Dick. His stories can be dazzling in their ways, in their reversals of premises, in their recursiveness, in their variations on overturning the assumptions we make about the nature of reality. It’s been a while since I’ve read much PKD, but I read three of the early novels in the past two weeks: his first, Solar Lottery (1955); his fourth-published, Eye in the Sky (1957), and his seventh-published, Time Out of Joint (1959). And my impression from these three early novels is that despite PKD’s characteristic virtues just mentioned, his characters are rarely sympathetic, his pacing and plotting are uneven to the point of being haphazard, and his  science-fictional components are standard SF furniture at best, comic book nonsense at worst. And these are three of his best early novels — the best three, apparently, until he published The Man in the High Castle in 1962.

And herein is an issue for the casual PKD reader. Where to start? It’s commendable that publishers have returned his work to print over the past couple decades, but for Vintage, as it did in the early 2000s, to release 34 of Dick’s SF novels in matching covers implied that they were all of roughly even quality, and one distinction of PKD compared to other popular writers of the ‘50s and ‘60s is that his work was highly erratic. (In fact, I did read two of the early novels when Vintage reissued them back then, The Man Who Japed and The World Jones Made, and read no further.) More recently, Mariner issued the same batch in 2011 and 2012, again in matching covers.

Vintage Books editions of several PKD novels, including
Solar Lottery (2003), Eye in the Sky (2003), and Time Out of Joint (2002)
All cover designs Heidi North (Click to enlarge)

Fortunately I’ve accumulated a dozen or so nonfiction books by or about PKD over the years, and two in particular were helpful in orienting me to where to start this time. (Not that I’m relying on their analyses or insights; I’ve tried to formulate my own reactions.) These are Kim Stanley Robinson’s The Novels of Philip K. Dick (which began as a university dissertation!), and Lawrence Sutin’s biography Divine Invasions: A Life of Philip K. Dick. The latter in particular rates all of PKDs books, including non-SF novels and short story collections, on a scale of 1 to 10. Thus I chose the three I did, which Sutin rates 5, 7, and 7 respectively, while Japed rates 2 and Jones 4. (At the extremes, Sutin rates Dr. Futurity and Vulcan’s Hammer, both from 1960, 1, while four titles are ranked 10: The Three Stigmata of Palmer Eldritch (1965), Ubik (1969), The Best of Philip K. Dick (1977), and VALIS (1981).)

There are also the six PKD titles chosen by David Pringle to be among his Science Fiction: The 100 Best Novels (1985, compiled here): Time Out of Joint, The Man In the High Castle, Martian Time-Slip (1964), Dr. Bloodmoney (1965), The Three Stigmata of Palmer Eldritch, and Do Androids Dream of Electric Sheep? (1968).

I came away preferring Eye in the Sky slightly to Time Out of Joint, and didn’t care much for Solar Lottery. I’ll discuss Eye in detail, and then mention the other two more briefly.

An accident at a nuclear facility leaves a tour guide and seven tourists in a heap on the floor. As they wake they find themselves inhabiting the private realities of one after another of the seven, before they manage to escape back into the real world.

This is a good example of PKD’s recurring theme of “what is real?”, and the book has a lot of fun extrapolating the details of a world as imagined by a religious fanatic, a prim lady, a paranoid shopkeeper, and so on, with an ending that unexpectedly wraps things up nicely.

Page references are to the Vintage edition.

The Other Two Books 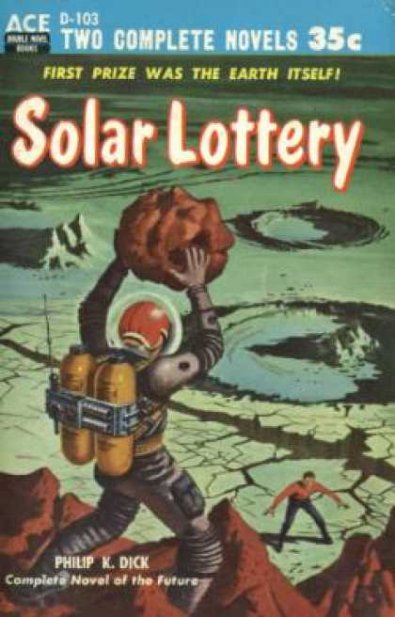 I found Solar Lottery a difficult read. The opening chapter is almost incomprehensible. (I read it a second time before moving on.) PKD throws everything about this future society — with its Quizmaster, its teeps, its Hills, its assassin challengers, its principal of Minimax, all at once in the first few pages… and then as the plot unfolds, has his characters discuss these matters over and over.

Unlike Eye in the Sky, which maintains a consistent point of view from Jack Hamilton, the POV in this once bounces around. Initially with Ted Benteley, who’s been in effect laid off from Oiseau-Lyre Hill and attempts to make at oath to the Quizmaster, but then switching POVs to other characters, some of them relatively minor. Is this deliberate, a way of keeping the reader off-balance? Or just a pulp writer’s hasty solution to explaining an intricate premise?

The science is that out of a Superman comic. A central plot concern is an assassin named Pellig, who is actually a “synthetic,” operated remotely by various operators (in order to foil the teep [telepathic] corps protecting the Quizmaster), and since he’s a synthetic, why, he can launch himself into space, just like Superman, for a quick trip to the Moon, or even deep space…

Time Out of Joint— 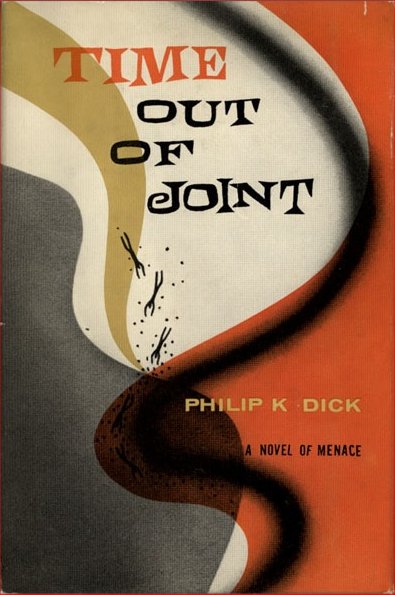 This much better PKD novel is about a 45-year-old man with the unlikely name of Ragle Gumm, who lives with his sister and brother-in-law in a small town in (apparently) 1959. Ragle doesn’t have a job; he spends his days solving daily puzzles in the local paper, and is the all-time winner. His reality starts to break down, in classic PKD fashion, one day during a visit to a park where a vending cart shimmers and disappears, to be replaced by a strip of paper with the words: “Soft-drink stand.”

It develops that this 1959 town is a fiction; outside the town, it’s 1998, and Ragle’s talent for choosing the right square in a grid in this daily contest corresponds to (in a frankly fantasy premise) the actual locations of missile strikes on Earth from Lunar attacks, in an ongoing war between Earth and Luna. (Had Orson Scott Card read this novel, I wonder?) The novel proceeds as Ragle detects discrepancies in his world, escapes the town, and gradually discovers the truth. (The film The Truman Show is analogous, to a point.) In an ironic conclusion, we’re given to understand that, were it not for Ragle’s ability to detect the attacks, the war would have been concluded long before.

My problems with this book are two. We’re told by the end that the town where Ragle lives is a real place in Idaho, dressed up to look like a 1950s town (to avoid some trauma of Ragle’s by placing him in a reassuring childhood environment), and that most of its residents have been conditioned to behave like 1950s adults (while a few like the neighbor Bill Black, are in on the conspiracy). So, it’s a real, physical town. Then why the dissolving drink stand, and later a bus, as if the town is some sort of conditioned hallucination? (My guess is that PKD charged along writing much of the book before figuring out quite how he was going to explain it.)

My second issue is that it’s baggy in its middle, with an extended escape sequence and highway pursuit that doesn’t seem to serve any purpose other than filling the story out to novel length.

While it’s risky to generalize about PKD’s themes and the attraction of his stories on the basis of just three novels, what occurs to me is that they are all about recomplication. They take a premise and steadily undermine it or change its parameters. The earliest book here isn’t about what’s real, it’s about a complicated social order and about who rules and who is oath-bound to whom else, but the novel barely begins before the rug is pulled from under the main character, and the roles the characters play change again and again. It took a few books before PKD’s reality-bending themes appeared, but they too involve rugs being pulled from under characters in more profound ways.

One more idea is surprising and perhaps significant. In both Solar Lottery and Time Out of Joint, there are final passages that affirm humanity’s need to explore and expand into the universe.

Solar Lottery ends with a subplot about the exploration of a 10th planet. Last lines:

“it’s the highest goal of man — the need to grow and advance… to find new things… to expand. To spread out, reach areas, experiences, comprehend and live in an evolving fashion. To push aside routine and repetition, to break out of mindless monotony and thrust forward. To keep moving on…”

And Time Out of Joint ends with Ragle realizing that the expansionists on Luna are right (not the Earthers whose motto is “One Happy World”) and about to switch sides, defecting to join the “lunatics.” Why? P245:

No migration had ever been like this. For any species, any race. From one planet to another. How could it be surpassed? They made now, in these ships, the final leap. Every variety of life made its migration, traveled on. It was the universal need, a universal experience. But these people had found the ultimate stage, and as far as they knew, no other species or race had found that.
…

And the ironic thing, he thought, is that people say God never meant for us to travel in space.

These sentiments were commonplace in the 1950s, of course, but they seem oddly out of place amidst PKD’s paranoid worlds in which reality can’t be trusted. So I’ll keep reading PKD novels (but probably not all of them) and see how these themes develop. PKD strikes me as a writer, like J.G. Ballard, who in his obsessive reworking of a handful of themes, created a body of work more significant than any particular titles.

Mark R. Kelly’s last review for us was of Eric Frank Russell’s Sinister Barrier. Mark wrote short fiction reviews for Locus Magazine from 1987 to 2001, and is the founder of the Locus Online website, for which he won a Hugo Award in 2002. He established the Science Fiction Awards Database at sfadb.com. He is a retired aerospace software engineer who lived for decades in Southern California before moving to the Bay Area in 2015. Find more of his thoughts at Views from Crestmont Drive, which has this index of Black Gate reviews posted so far.

That PKD’s characters are rarely sympathetic is a statement that goes contrary to my reading of him, that’s for sure.

OK I’ll walk that comment back a bit. Ragle Gumm is sympathetic. Jack Hamilton is sympathetic, and so is Bill Laws. But the overriding impression I had from all three books, especially Eye in the Sky, is how unpleasant most of the characters are.

I think part of the contradiction may come from the fact that while many of PKD’s characters might be objectively unsympathetic, Dick himself had great sympathy for them, no matter how big a train wreck they were. He’s different in this way from someone like Heinlein, who clearly reserves all of his esteem for the strong and competent winners of the world.

There is something dazzling about PKD – not just the whole gnostic thing – but how he expresses his ideas. He has a great knack for the telling detail – the vending machine in ‘Eye in the Sky’ is a good case in point. He also has the same flair for setting up a character and a situation. But most of his books don’t have a second act, or even a middle act. It’s kind of weird that an author who’s able to establish believable characters from the get-go, then has no idea what to do with them.

I liked TIME OUT OF JOINT a lot more than you did, and I disliked SOLAR LOTTERY to about the same degree you did.

My reviews: TIME OUT OF JOINT: http://rrhorton.blogspot.com/2019/05/a-lesser-known-philip-k-dick-novel-time.html