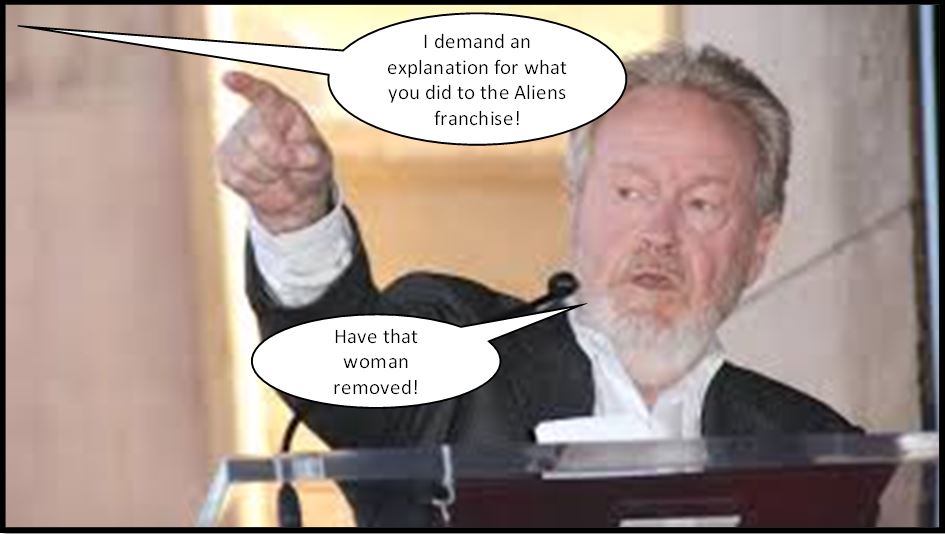 There is no director for whom I have more mixed feelings than Ridley Scott. On one hand, he is responsible for some of my favorite movies of all time such as Alien, Blade Runner, and Gladiator. On the other, he is also responsible for several films on the rock bottom of my list such as Kingdom of Heaven, Exodus; Gods and Kings, and the two Alien prequels, Prometheus and Alien Covenant – neither of which I will likely ever forgive him for. I wish I could easily delineate and say as long as Scott sticks to science fiction, he’s generally good, but no joy.

So, it is with mixed feelings that I dig into his latest project, Raised by Wolves.

Originally created for Turner Network Television (TNT) the project was recently moved to the streaming service HBO Max as a 10-episode miniseries. This marks Scott’s debut on the American small screen as he is personally directing the first two episodes, while acting as executive producer for the rest.

Scott has done a fair job of keeping the plot of Raised by Wolves a secret. From what I’ve learned, you think you’re getting the gist from the trailer and the official synopsis, but from what I can piece together, the storyline goes much deeper and darker. 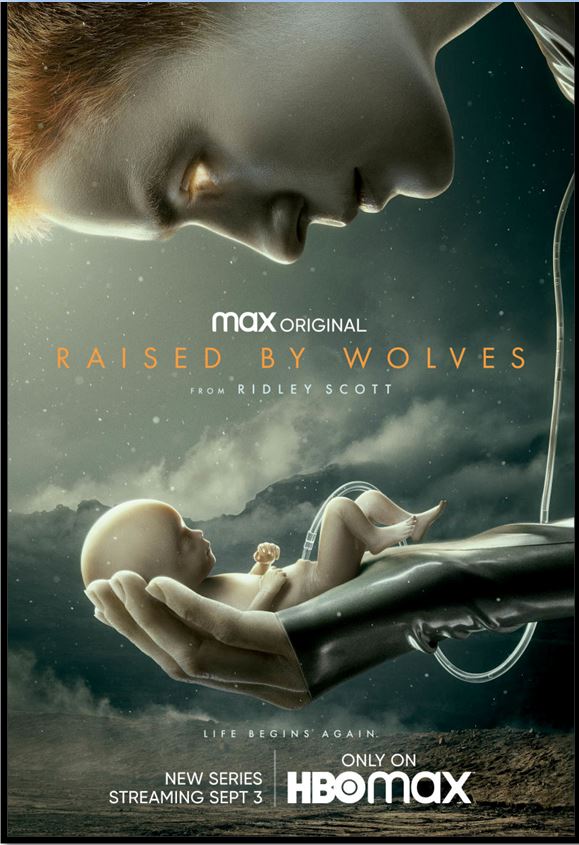 Raised by Wolves centers around two androids — Father and Mother — tasked with raising human children on a mysterious new planet after the Earth was destroyed by a great war. As the burgeoning colony of humans threatens to be torn apart by religious differences, the androids learn that controlling the beliefs of humans is a treacherous and difficult task.

However, check out the trailer…

Not to be a killjoy or anything, but considering my two, passionately different feelings about Scott’s work, I had to try to find out more. For instance, what’s the deal with the creepy thing crawling across the kid’s sleeping pod? Who is busting in to attack Mother? What about her covered-in-blood howling, and WHAT is up with that Three Little Pigs story?

I found a quote from Scott on Deadline from when Raised by Wolves was originally headed to TNT. He said:

I’m always searching for new frontiers in the sci-fi genre and have found a true original in Raised by Wolves — a wholly distinct and imaginative world, full of characters struggling with existential questions. What makes us human? What constitutes a family? And what if we could start over again and erase the mess we’ve made of our planet? Would we survive? Would we do better?

Okay, but that’s still pretty generic. I found Den of Geek to be as curious as I was and they found out a bit more. They had some more details on Danish actor Amanda Collins who plays Mother:

(She’s) an android with a secret past who has been programmed to raise a brood of human children on a faraway planet. In addition to teaching her children to survive, Mother must also keep them from believing in the unreal; to ensure this virgin planet isn’t torn apart by the same religious differences that lead the Earth to its ultimate destruction. Mother hopes her family will serve as the nucleus for a peaceful, technocratic colony — a new beginning for humanity. But as she struggles to mold these growing humans, she also begins uncovering secrets hidden within her own programming, secrets that could help her protect her family, but could just as easily destroy them.

They also found out the great war which destroyed planet Earth was a religious one, which explains why Mother tries to stop the children believing in “the unreal.” 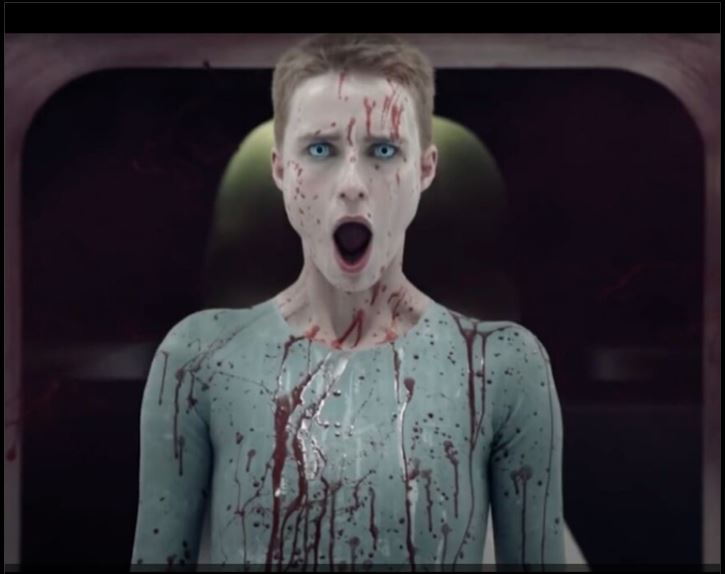 I also found out is that Scott purposely chose a cast who would be largely unknown to U.S. audiences, to make the story fresher and more believable. As Scott is known for his attention to detail, we might be able to draw some conclusions from the name of the series. According to a cultural dictionary, “raised by wolves” means socially inept and uncivilized. Perhaps this refers to how children are bound to turn out, when raised by an android who is created by humans.

Looks like we’ll just need to wait and see.

Raised by Wolves premieres on HBO Max on September 3.

Funnily enough, there’s a SF movie on Netflix called ‘I am Mother’ about a girl who’s raised by an AI she knows only as ‘Mother’ – I wonder if that was an influence? It’s interesting that a duplicitous android is a key character again, just as it was in ‘Alien’.

I’m with you on Scott. I can never quite figure out what his priorities are as a director. ‘Bladerunner’ is thought-provoking, ‘Gladiator’ looks great and has Russell Crowe, but thought-provoking it is not, whereas ‘Prometheus’ is just aggressively dumb (although there are enough token nods re various themes and tropes to suggest a much better movie).

Aon – I did a bit more digging. “I Am Mother” premiered in 2019 which means it was shooting in 2018 when Ridley Scott announced his project for TNT. So theoretically, there could be inspiration from the Netflix series, though the plot lines are very different.

“Aggressively dumb” is the best description of Prometheus I have ever heard. Period.

I too have wildly conflicting reactions to Scott’s work. I think in the end he’s just a slick, passionless technician, and when his considerable skill is applied to a solid project you get a solid result (Alien, Gladiator) and when it’s applied to something shaky, you get Prometheus, which is indeed the dumbest movie ever made. And Scott isn’t much concerned with choosing between the worthy and the worthless; I suspect he doesn’t think that’s his job. His best movie may be his first – The Duelists.

Thanks very much, Sue. I wonder – re cyborg mothers – if it’s just a popular trope at the moment? (e.g. The Umbrella Academy).

Thomas – yeah, that definitely makes sense. Scott has a strong commercial streak (not necessarily a bad thing) but I do get the impression he cares more about some projects than others. What that criteria is, though….

I feel the first paragraph very deeply, but with regards to Peter Jackson.
Rings Trilogy – super yay.
Hobbit Tril…I can’t even type it…

Ok Black Gaters, you’re going to love this. I actually dug into the trope of android mothers raising human children. According to an article I found in my school library, the psychology behind this is to signal a coming apocalypse or dystopia. “Motherhood” is a symbol of the sacred in society and when this is replaced by a machine, it signals the downfall of civilization.

Given the current state of affairs in the world, it now seems perfectly logical there would be a rise in this trope. Though all of these projects were well underway before the pandemic, the news hadn’t exactly been sunshine and butterflies for a couple of years prior.

And who knew that doctorate degree would be useful here at BG?

That makes a lot of sense, Sue. Plus both ‘I am Mother’ and ‘The Umbrella Academy’ feature an apocalypse.

If you really wanted to run with the ball, you could look how the trope is presented in both cases. ‘I am Mother’ is post-apocalyptic and morally bleak and ‘Mother’ is essentially a tyrant. ‘The Umbrella Academy’ is pre-apocalyptic, lighter in tone, and Mom is the largely ineffective creation of an authoritarian father figure. So I guess there’s a spectrum?