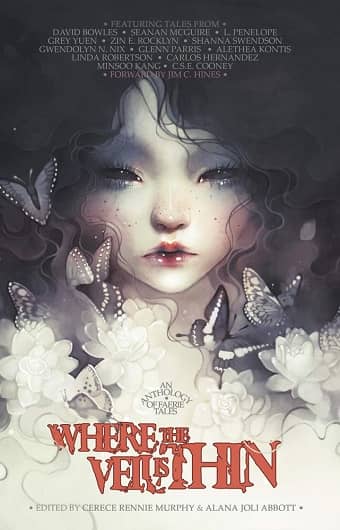 Where the Veil Is Thin, an anthology of original stories where humans run afoul of faeire-like creatures (or sometimes, faeries run afoul of humans), is a project of my heart, and I’m so pleased that it began to show up on bookshelves—at least, virtual ones—earlier this month! It is a project that was years in the making.

And it almost didn’t happen.

Back in 2017, the publisher of the company now folded into Outland Entertainment approached me with an idea. He and his wife loved fairy stories, he said; what would I think about doing an anthology of original stories based on the Seelie and Unseelie courts? I liked the idea, but I wanted to go one better; I didn’t want to limit our tales to the Celtic tradition of Seelie and Unseelie. What would an anthology look like if it reached into different parts of the world, with stories from authors who wouldn’t just retell tales from a European tradition? I was excited about the idea of pairing tales that could feature fox spirits or boo hags with the types of stories and fairies I was more familiar with.

I didn’t want to do it alone, so I reached out the Cerece Rennie Murphy, whose work I had deeply admired on the website Narazu. The mission of Narazu is to bring the best of Indie Sci-Fi to a wider audience, and to celebrate the cool works that indie writers and artists are creating. Cerece was interested in the idea, and we started hashing out plans.

And then the publishing company where we’d started the idea fell apart. It closed its doors in November 2017.

After some maneuvering, Outland Entertainment decided to keep moving forward on the anthology, and Cerece agreed to stick with the project. We started reaching out to authors, some that Cerece knew, some I had worked with before on other projects, some recommended to us by other contributors. We planned to line up the writers and have all their stories completed by July 2018, when we would launch the anthology.

The best plans, however, were a bit ambitious. Outland Entertainment already had two anthologies slotted for 2018, and because we were a new company at putting together anthologies and fulfilling their Kickstarters — not to mention completing some projects that the previous publisher had left unfinished — we had no idea we’d bitten off more than we could chew. Eventually, Outland released two really fantastic anthologies from those 2018 Kickstarters, which I was excited to help edit, but it took a long time.

We wanted to make sure that before we launched a new Kickstarter, we got everyone their books from those 2018 campaigns. And we just weren’t sure when that would happen.

This is the point at which everything might have ended if the Veil team hadn’t been made of such fantastic contributors, and Cerece hadn’t been such an amazing co-editor! While the fulfillment team at Outland worked to get the other books out, Cerece stuck with me, and most of our contributors agreed to wait. And the result?

We have tales of modern fairies — Seanan McGuire’s story largely takes place in a Target — and fairies who congregate in bars where hunters won’t harm them (an “Elsewhere” story by L. Penelope). Two stories dally in lives after death, one a modern tale from C.S.E. Cooney and one that included fox spirits by Minsoo Kang. Alethea Kontis’s “The Seal Woman’s Tale” takes place in her larger world of Arilland, and draws on folklore to enhance the complexities of her fantasy setting. Both Grey Yuen’s “Glamour” and my own reprinted story, “Don’t Let Go,” start from the tale of Tam Lin and go in completely different directions. Shanna Swendson’s “Take Only Photos” imagines a fairy infestation at Christmas time; Gwendolyn N. Nix’s “Old Twelvey Night” features an apple tree guardian facing invaders on Twelfth Night.

Zin E. Rocklyn’s reprinted “Summer Skin” is a horror tale of a person — or perhaps a creature from beyond the Veil — trying to meet her needs in an inhospitable city; “The Storyteller,” a reprint from David Bowles, is a celebration of the power of story over generations. Carlos Hernandez contributed a game of a story where the reader chooses how to navigate Fairyland, in Spanglish, with the hope of surviving to become someone entirely new. And we ended up with two very different tooth fairy tales at the opening and closing of the anthology, a contemporary horror tale from Glenn Parris and an Old Western tall tale by Linda Robertson, neither of which are the type I’d share with my five year old (who already doesn’t want to give up his baby teeth).

Jim Hines’s introduction brings together all the ideas, honoring fairy stories while warning of the dangers of crossing the Veil and seeing what’s on the other side.

Some of the stories made me shiver. Some made me laugh. Some brought me to tears (thanks Claire!).

I am so glad that they exist beyond my inbox, and beyond my dreams for this project. I’m thrilled that they are out in the world—on our side of the Veil.

I hope you enjoy them as much as I do.

Alana Joli Abbott is an editor and author, whose multiple choice novels, including Choice of the Pirate and Blackstone Academy for Magical Beginners, are published by Choice of Games. She is the author of three novels, several short stories, and role playing game supplements. As Editor in Chief of Outland Entertainment, she edits fantasy anthologies, including Knaves: A Blackguards Anthology and Where the Veil Is Thin. Her current anthology, APEX: World of Dinosaurs, is funding on Kickstarter. .