And now for something more positive: ten awesome little moments in RPGs, beginning with a very self-serving one.

It only took me a quarter century of playing and selling RPGs to get into the design end of things. 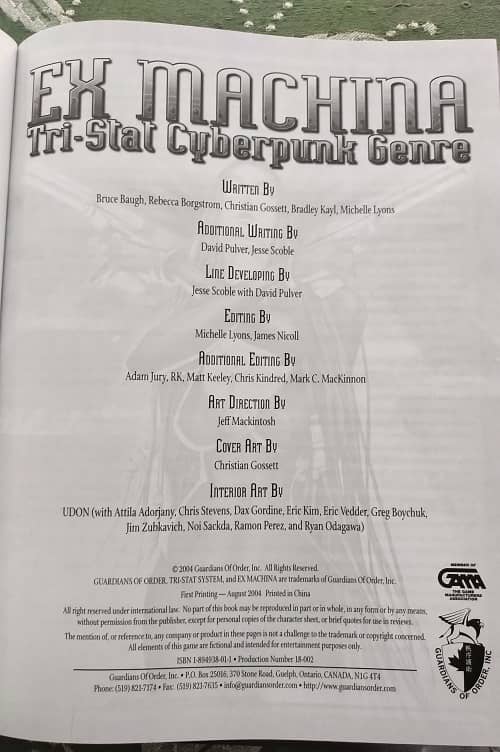 It was a very educational experience for me:

But still! I have professional gaming credits and physical artifacts to which I can point!

Mark Rein*Hagen’s 1991’s Vampire the Masquerade offered players the opportunity to play lugubriously morose undead, cursed with eternal youth and abilities beyond those of mortal kind, generally with supernatural beauty tossed in there as well. The only distraction from their melancholy, endless backbiting politics. Basically, Drama Students: the RPG.

I could and have made fun of many aspects of the game, from the designer’s splat to the game mechanics, but VtM did one thing extremely well. VtM was in its self-conscious 1991 way a lot more inclusive than competing RPGs and it sold buckets loads to women. It was also pretty popular with the queer kids as well.

This shouldn’t have been exceptional in 1991 and yet it was. Women make up half the population. Games unlikely to sell to women leave half the money on the table but until Vampire came along, the best one might encounter was games that weren’t actively hostile to women gamers. Others made it pretty clear they considered women second class or possibly mythical. White Wolf was a notable exception.

Dream Pod 9’s Heavy Gear RPG depicted the ongoing struggles between Terra Novan factions as that world recovered from an interregnum that followed Earth’s retreat from empire. These conflicts often focused on Gears, Landmate-like piloted mechas. I liked the game mechanics but being hooked on Masamune Shirow’s manga at the time, mostly used the rules to try to design Tachikomas with a system that was never intended for that purpose1.

The Heavy Gear product line cover designs were unusually eye-catching, unambiguously identifying the brand at a glance2. No customer ever had a problem picking out Heavy Gear products, regardless of where they were shelved.

One day, I decided to test just how recognizable the Heavy Gear products were. I handed a copy to a customer and had him walk away from the store until I could no longer recognize the Heavy Gear rule book.

The test failed because buildings and hills got in the way before resolution was a factor.

[1: I could have used it as an Appleseed RPG but that never occurred to me.]

[2: And not in a ​“I’d better make sure that’s not the first thing people see when they enter the store.”]

George MacDonald and Steve Peterson’s 1981 Champions is Hero Games’ superhero rpg. I think I first encountered it with the second edition, which means I missed the heady days when one could put a multipower into an elemental control. I assure you that makes sense. I played Champions avidly across third, fourth, and fifth editions, ultimately moving on once its increasing complexity exceeded my capacity to keep the rules straight. 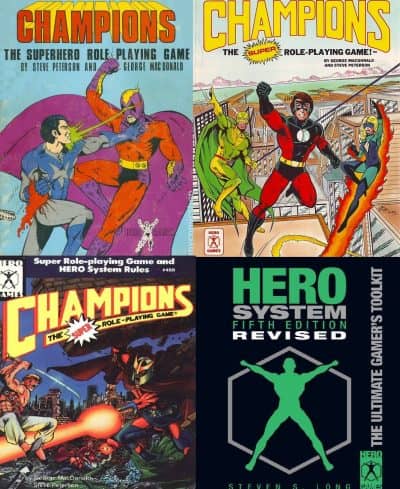 The aspect of Champions that endeared it to me wasn’t the moral certainty it offered that every possible problem can be solved with the right application of skin-tight garish clothes, bare fists, and laser vision, although that is comforting. Champions was the first system I encountered where character generation was fully points based, entirely under the player’s control. The only thing between player and a perfect character was flawless comprehension of the rules and an ability to convince the Game Master that the clearly abusive interpretation of the mechanics one proposed was reasonable.

Although I am in no sense a control freak, I loath being in any was dependent on factors that are imponderable, unpredictable. random, and/or outside my command. The ability to craft characters precisely offered Champions and the Hero Games rules derived from it played into my preferences.

Unable to purchase Chaosium’s RuneQuest outright, Avalon Hill instead licensed rights to publish a new edition of the game. Unfortunately, for various reasons the hoped for sales synergy between Chaosium’s established product and Avalon Hill’s market presence failed to pan out. Nevertheless, nobody could deny Jody Lee’s art for the Deluxe RuneQuest box was exquisite looking.

Jody Lee delivered arguably the best RPG cover of the era, using as her models Kate Elliott and Elliott’s husband.

Yes, it’s true. My spouse & I were the cover models for Jody Lee’s cover illo for 3rd edition RuneQuest pic.twitter.com/TzTrMb9l01

Clarence Redd’s 2016 M‑Space is an SF table-top role-playing game. It uses the D100-derived Mythras Imperative game engine, which is to say it is a close relative of RPGs like RuneQuest , Call of Cthulhu, and Future World.

M‑Space uses conflict pools. They are fairly abstract tools to resolved extended conflicts between two or more people. These can be used to determine the outcome of any on-going conflict. These need not be restricted to physical combat. The detail that caught my eye was players are not restricted to one conflict at a time. To quote:

In some situations, you may want to use two separate pool values. Often it will be the main Conflict Pool, plus a pool for physical injuries.

Example: At a court duel, with a small gathering of spectators, two pools are used: One for physical injuries and one for social damage. While lightsabers dazzle, the opponents take turns insulting each other. One person may win the physical battle, but the rival can win the hearts of the crowd – opening up a lot of interesting situations in the scenarios to follow.

I don’t know if M‑Space style pools or the idea of running parallel conflicts involving unrelated skillsets are original to M‑Space but that’s where I first encountered them. The idea described above intrigued me quite a bit, which is rarer now than it was when I began role-playing.

SPI’s Universe was, as previously mentioned, a foray into science fiction roleplaying. Included in the box, the Interstellar Display, a poster-sized, astronomically accurate (by 1980s standards) map depicting all known stars within 30 light-years of Earth. Unlike Traveller’s star maps, the Interstellar Display took into account that space is three-dimensional, not a paper-map-friendly two dimensions. It was very eye-catching and it makes me sad nobody seems to have ever take a high-resolution scan of the whole thing. The best I have found is this scan of the box set at Wayne’s Books. 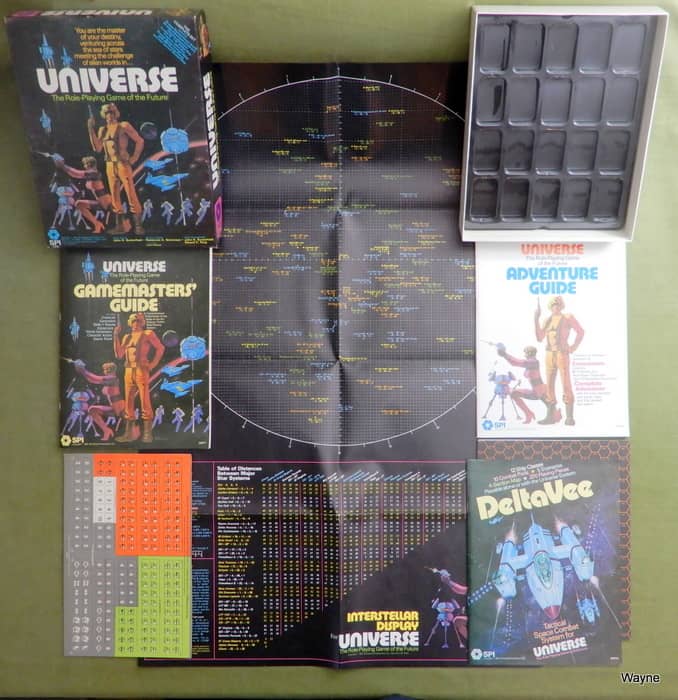 Two-dimensional displays of three-dimensional volumes quickly get cumbersome as the volume increases and the number of objects within that volume soars. 30 light years is a reasonable compromise between having enough star systems to be interesting and not having so many as to be unreadably busy. GDW’s 2300 AD opted for 50 light years, encompassing about five times the volume, and their map was pretty crowded. 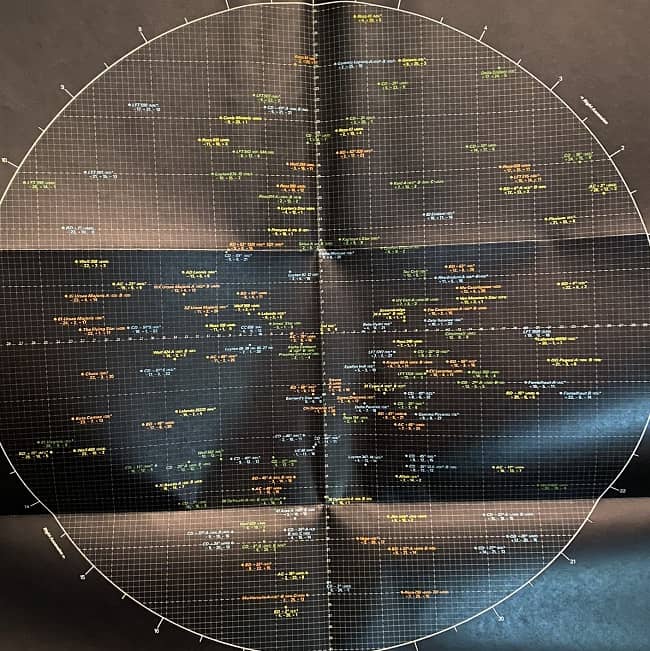 The Universe map is long out of print but happily Atomic Rockets is happy to fulfill your star map needs.

Traveller is 43 years old. Over the decades, GDW, its successors, and its licensees have produced a metric f***ton of worlds, thousands upon thousands of strings of numbers denoting the characteristics of thousands of worlds.

Traditionally, these were presented to gamers in the form of printed matter. We live in the modern world, however, where personal computers light enough to be moved by four burly men are inexpensive enough to be owned by landed gentry, where information may be conveyed across great distances at speeds of 1200 Baud or more. This presents an opportunity. 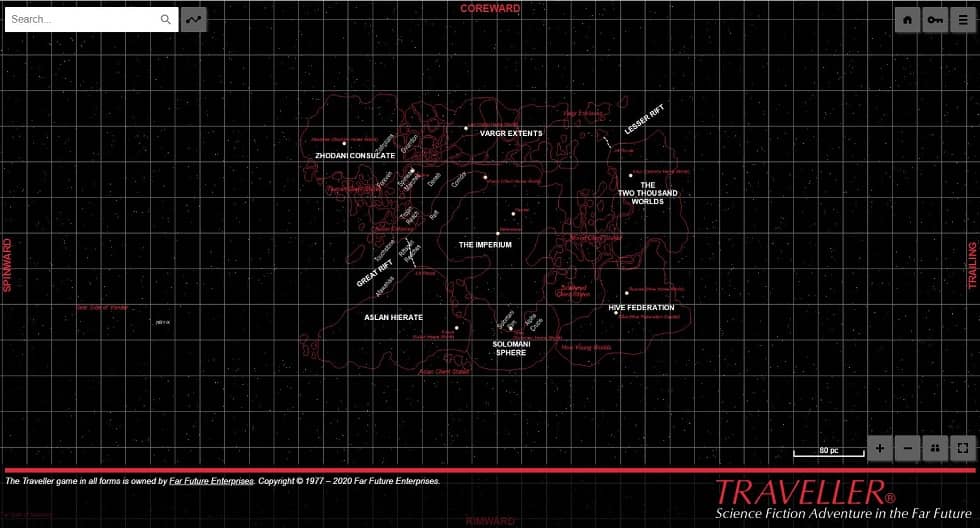 The Official Traveller Universe (OTU) is the primary setting for various editions of the Traveller game, controlled by Far Future Enterprises (FFE). This is the universe described by publications from GDW, FFE and Mongoose Publishing, and by past licensees such as Digest Group, FASA, Imperium Games and others, The setting includes the Third Imperium, Zhodani Consulate and Solomani Confederation, alien species such as the Aslan, K’kree, Vargr, Hivers and Droyne, and a history from the Ancients through the New Era.

Under the FFE Fair Use Policy, the Traveller Map presents an interactive view into the OTU, making use of official data approved and provided by FFE — as well as apocryphal and unofficial data.

In general, early RPGs tended to treat gods as a convenient source of mojo for clerics (or as something for high level player characters to fight). There was no particular need for non-clerical characters to claim affiliation with any particular deity.

RuneQuest in contrast used religious affiliation to bind characters into particular social networks. Which god a character followed defined to a fair degree where they fit into society, who they got along with and who they did not, and provided them with cult-appropriate training in skills and magic. A character with no cult affiliation was at considerable disadvantage. This was part of the general pattern in RuneQuest for characters to exist in a specific context, rather than springing up out of nowhere like little murder hobo mushrooms.

10) The Resurrection of Chaosium’s RuneQuest

Let’s call the history of RuneQuest from the Avalon Hill deal to the early 21st century ​“troubled.” Its history after 2003ish was… convoluted seems diplomatic enough, but at least there were versions of RuneQuest available, albeit not from Chaosium itself. I think there have been seven, maybe eight, editions of the game over the decades. Annoyingly the companies don’t seem to have used a consistent numbering system.

As for Chaosium itself, it underwent what was likely an excessively interesting process in which it essentially broke into component companies, and then re-accreted back into a unified body1. In 2018, Chaosium finally produced a new, in-house edition of their venerable RPG. Huzzah!

I’ve owned a copy since 2018 and at some point I really need to read it.

[1: I would draw a parallel with a gas giant moon thought to have been disrupted by an impact, then reformed, but I can’t recall which moon that was.]

Prolific book reviewer and perennial Darwin Award nominee James Davis Nicoll’s work has appeared in Publishers Weekly and Romantic Times as well as on Tor.com and his own websites, James Nicoll Reviews and Young People Read Old SFF (where he is assisted by editor Karen Lofstrom and web person Adrienne L. Travis). He is currently a finalist for the 2020 Best Fan Writer Hugo Award. His last article for Black Gate was Ten WTF Moments from Classic RPGs.

Champions was my most favorite game of my middle childhood. It helped that I played it with two very close, very creative friends. We had interesting character concepts and villains and took turns GMing.

The other games in our retinue were WEG d6 Star Wars, Middle-Earth Role Playing, and TORG: The Eternity Wars (though one in our group also had Top Secret: S.I. and James Bond, but I think we played those, perhaps, exactly one time each).

I wonder what your thoughts are on Tunnels & Trolls. Recently I got a bunch of solo adventures via a Bundle of Holding, so I ordered a copy of the deluxe edition from Flying Buffalo.

My absolute favorite game of the moment is Modiphius’s Conan 2d20: Adventures in an Age Undreamed Of. It fires on all of my most favorite cylinders.

I enjoyed Tunnels and Trolls. It’s a simple, easy-to-learn system, which makes it ideal for solo play. You can pretty much pick up and play a T&T solo dungeon, which I guess is what made them popular.

Thank you for a fascinating article, Mr. Nicoll. I too recommend Tunnels & Trolls; it is the epitome of simple and fun. It is also immensely influential; Chaosium’s dedication for the first edition of RuneQuest gives Ken St. Andre credit alongside Dave Arneson and Gary Gygax for inspiring RQ.

And Jody Lee’s artwork for RQ3 WAS exquisite.