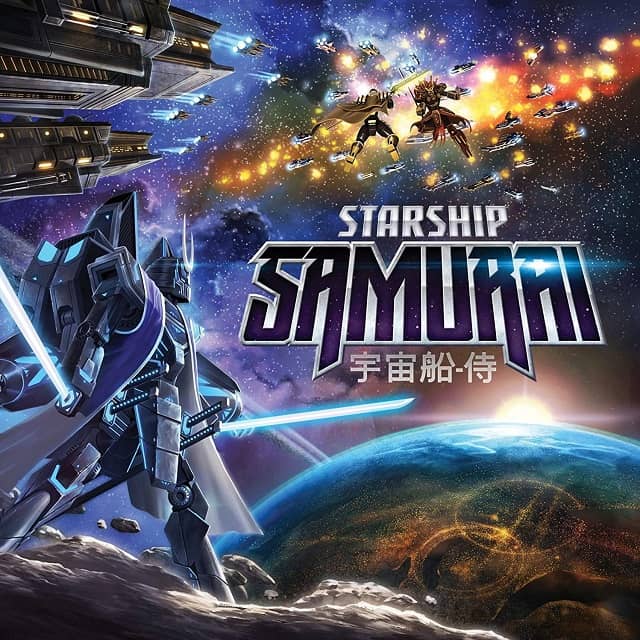 On Saturday March 7th, as Illinois was just starting to wake up to the severity of what would soon be a full-blown coronavirus pandemic, I joined about 150 other local gamers in a tightly packed back room in Mount Prospect for the 2020 Spring Games Plus Auction. Looking back, it was probably a dumb thing to do. But although I didn’t know it then, it was the last time I’d be able to walk through the doors of a games store — or retail store of almost any kind. And I’m not sorry I did it.

Of course, I brought a lot of games home. I spent over a thousand bucks, but is the man without a full library of board games really ready for a global pandemic? I don’t think so. You can’t put a price on true readiness, I always say. Well, that’s what came out of my mouth when Alice found out, anyway. It was the best I could come up with.

What was I looking for at the auction? Bargains! And cool discoveries, and I found plenty of both. I promised in my first write-up on the auction back in March that I’d say a few words about some of my more interesting finds, and I take these promises seriously. So today we’re going to talk about Starship Samurai. Mostly because it has giant Samurai Mechs in it. And if you don’t understand what’s exciting about that, you’re at the wrong website, bud.

Like many hundreds of games that flashed across the auction block, I’d never seen Starship Samurai before. It was released by Plaid Hat Games in 2018 and, far as I can tell, was not a hit. It’s a odd subgenre for a board game, I’ll grant you that. (Japanese giant mechs in space, in case there was any possible confusion.)

But there were no other bidders, and I won the game for the minimum bid of $5. Come on — half of you would have paid five bucks just for half a dozen plastic Samurai mechs. You know I’m right.

This is not just a game about giant Samurai mechs having sword duels in deep space. Ha ha ha, no. As awesome as that sounds, there’s also a back story about a Lotus Galaxy, a dead Emperor, warring space clans, political intrigue, and…. okay, I don’t remember the rest. Giant Samurai Mechs in Space! That’s the sum total of what I extracted from an hour of research on this game.

If you’re one of those picky gamers who likes to read reviews and stuff. don’t bother. The reviewers weren’t kind to this game. Probably because they were never little boys, and they have no joy in their souls. Here’s the intro to the mostly negative review by Wolfie at I Slay the Dragon. At least he appreciates the premise.

War never ends, does it? You think you’ve made things right with your civilization, you’ve spread to the stars to reach vast resources. But apparently humankind just gets bored easily, so rather than looking around and saying “hey, we’ve got nearly limitless resources and plenty of space!” you think “let’s make a clan and go to war with other clans.” Plus, the Emperor died leaving a void of power. Plus, you’ve got these giant samurai mechs anyway. Might as well go to war to rule the galaxy.

Here’s a look at the back cover, and just a few of the 44 plastic mechs included with the game, which I know you all want. (No, mine aren’t for sale. Stop asking.) 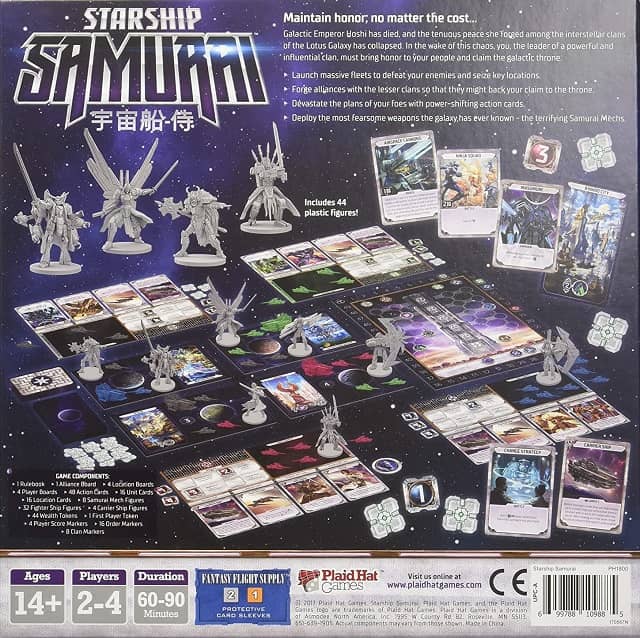 Box back for Starship Samurai

Here’s the game description from the Plaid Hat website.

Lead your clan to victory in Starship Samurai, an epic, fast-paced game of area control, fought among the stars of the Lotus Galaxy! Take command of the galaxy’s mightiest clans to secure your claim to the emperor’s throne. Explore a world of political intrigue and earth-shattering combat from acclaimed designer Isaac Vega (Dead of Winter, Ashes).

As the leader of your clan, you will command massive fleets used to seize key locations and battle your enemies. Play battle cards to sway the outcome of each conflict in your favor and destroy your enemy’s fleet. But war is not the only path to victory. You will need to spend your resources and political influence to manipulate the lesser clans to aid you in your quest to claim the throne. Each lesser clan you sway to your Alliance Track will further strengthen your clan’s supremacy.

Now, be honest. If I ask you right now to tell me what this game is about, you’re not going to mention the words ‘Alliance Track” or ‘resources’ or ‘political influence.” You’ll think for five seconds and then say, “Giant Samurai Mechs in Space!” And then ask for a high five, because you’d deserve one. 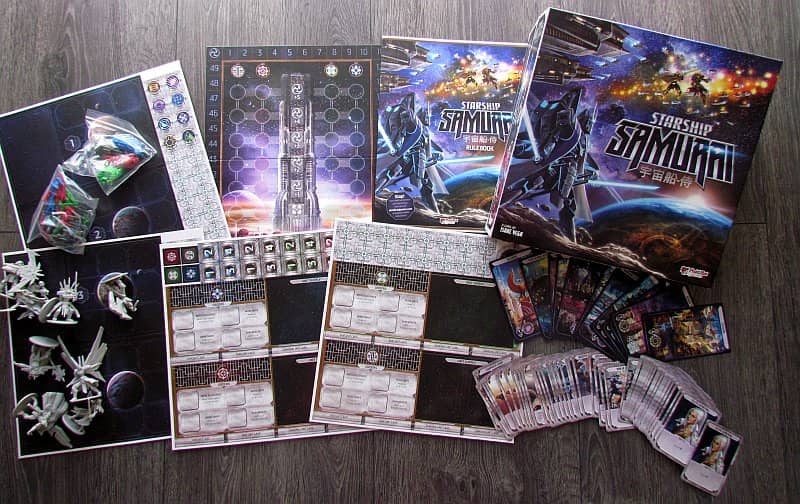 There’s a lot of samurai stuff in that box

I don’t mean to imply that most of the reviews were negative. Just those that weren’t by nerds. Here’s a more positive coverage from Gaming With Sidekicks.

I really like this game. It’s different than what I thought it would be, but I can’t emphasize enough that it’s not a bad thing. I like how casual this game feels. It’s a smooth, well-designed game, with a theme I love.

I do wish set up was a bit quicker. And for as much care as has been put in to crafting this world, it seems like a shortcut to make all the ships identical, but I totally get that that’s a cost saving decision. Maybe just one I wouldn’t have made. And one more tiny pet peeve. I wish there were colored caps you could put on the bases of the mech miniatures, to quickly signify which mech belongs to which player. In multi player games, it can be difficult to look at the miniature, then scan the players’ cards to see which one matches that mech. Or you could just ask out loud, but I’d prefer to have that quick visual reference.

All of my complaints with this game have NOTHING to do with the actual game play or mechanics. The game plays great, especially with the listed variants in the rule book. The samurai mech miniatures look beautiful. I haven’t really talked about how great these pieces are. This is actually the first game that I’m painting the pieces for; taking the plunge in to the world of painting miniatures…

If you’re a fan of giant robots, this is a game you can’t miss. It doesn’t try to get overcomplicated with customizing, or building, or upgrading. You get your mechs, and go to battle. 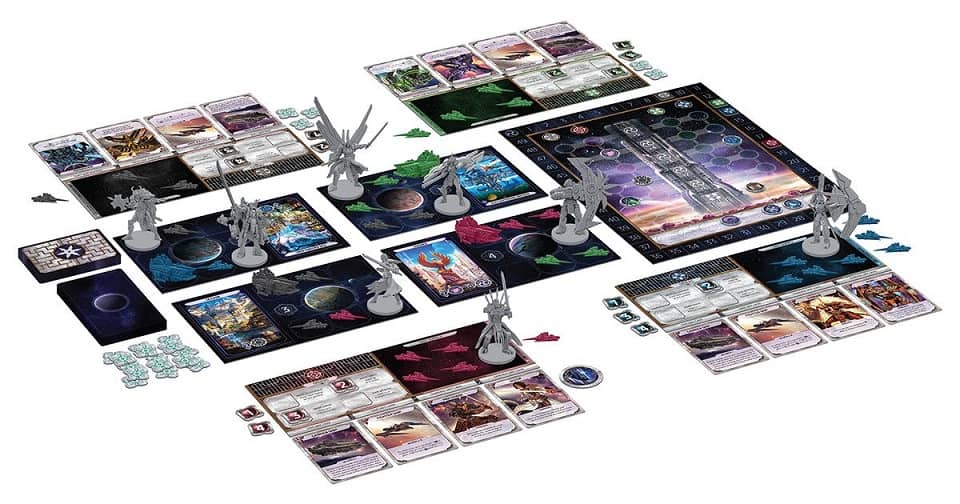 The giant samurai mechs in action. Kinda gets your heart rate up, doesn’t it.

Starship Samurai was published by Plaid Hat Games in 2018. It was designed by Isaac Vega, with art by Gunship Revolution. It is intended for 2-3 players aged 14+, and play time is 60-90 minutes. It is still available, and retails for $39.95. Order directly from the Plaid Hat website.