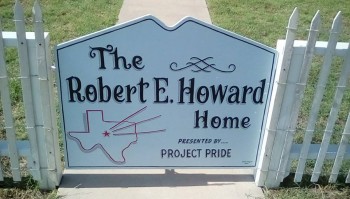 Most readers of Black Gate are probably already aware, but for those who are not, Robert E. Howard Days has been a major annual event for the small town of Cross Plains, Texas, since 1986. The gathering, including an annual dinner and festival and much more, has celebrated the life and writings of Robert E. Howard, the godfather of Sword and Sorcery literature and the creator of such fictional characters as Conan the Cimmerian, King Kull, the boxing sailor Steve Costigan, and many others. Yes, all of this has gone on in June for more than three decades.

As one might expect, because of the Coronavirus, Howard Days did not take place in 2020.

Still, I had the great fortune to attend Robert E. Howard Days in 2018. I had planned to visit again in 2020, but … well, we all know what happened.

Anyway, though Howard Days 2020 didn’t occur, I have plenty of memories from just two years ago. It was astonishing to walk through the place where Howard had written all of his action-driven yarns. It was interesting to study the maps on the walls and the book cases. It was great to meet people, some I had known for years but only through the power of the Internet. It was nice to meet the locals and chat with them. All while I picked up plenty of books and trinkets and other memorabilia, and I got to listen to numerous discussions about all things Howard.
Ah, well, there are always other years, for Howard Days 2021 is already in the planning stages, and hopefully nothing will stand in its way.

Still, there’s something I’d like fans of Howard to keep in mind. Howard Days is the biggest fundraiser of the year for Project Pride, the organization that is caretaker for the Robert E. Howard House. Without a Howard Days in 2020, Project Pride lost out this year. For that matter, Cross Plains is such a small town, I’d have to imagine Howard Days, and the Barbarian Festival that goes along with it, is one of the biggest bringers of funds into the area.

So what can you do? 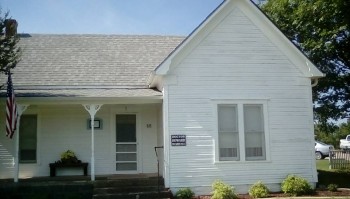 Well, for one thing, you could head over to the Howard Days website and give a donation through their Paypal account or by mailing it in. From checking out the Project Pride page on Facebook, it’s my understanding the organization has received enough recent donations to help with some landscaping issues around the Howard House, but I’m sure they still need funds to help with the upkeep of the place for the rest of the year.

Also, for the future, why not attend Howard Days? Sure, for most of us it’s a long drive or flight, but if you’re a fan of Robert E. Howard, fantasy literature in general, or Sword and Sorcery literature in particular, you owe it to yourself to attend at least once. Not only will you get to experience a piece of history while fellowshipping with like-minded others, but you’ll be helping a small community by keeping their past alive.

And who knows? Maybe we’ll see one another at Howard Days 2021.