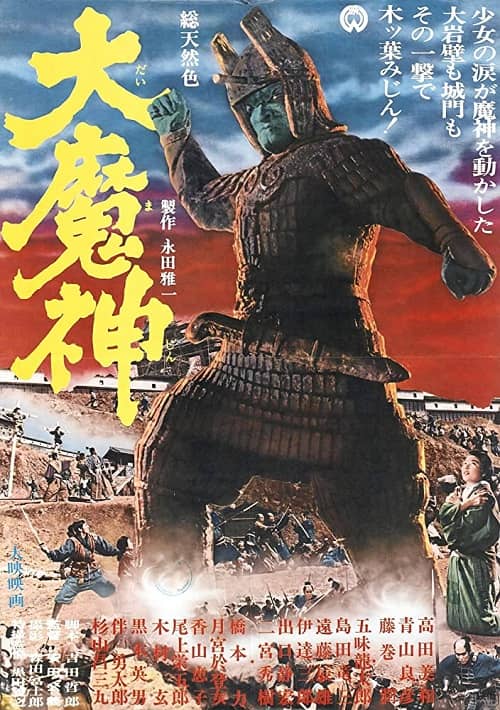 This time around we’re taking a look at Japanese films from a number of different genres.  I’m not going to mention any of the Japanese movies I’ve discussed in previous columns. There’s plenty of great films to cover, more than enough to revisit this topic again in the future.

19. Daimajin (1966: 8) The first, and best, of the Daimajin Trilogy released by Daiei Films, which are historical fantasies concerning a giant statue that comes to life to wreak just vengeance on various evil-doers.

18. Yokai Monsters: 100 Monsters (1968: 8) Another Daiei Films effort, also the first and best in a trilogy. In this one a rich landowner plans to tear down the homes of some poor peasants as well as their local shrine to clear space for a brothel. He holds a Hyakumonogatari Kaidankai ceremony during which various tales of yōkai, or creatures from Japanese folklore, are told, which provides something of a framework for the following events. The special effects are primitive by today’s standards, but mostly effective, evoking a creepy atmosphere and enlivening a familiar plot. 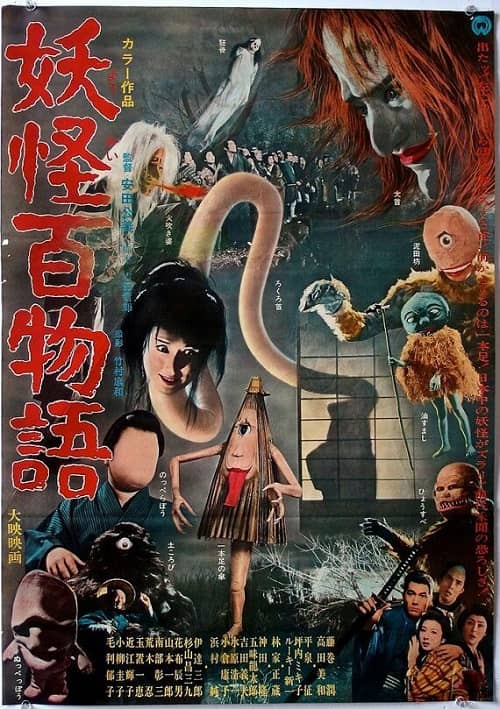 17. Secrets of the Telegian (1960: 9) This Toho film, directed by Jun Fukudo, follows a common genre mash-up of the era, with science fiction combining with a police procedural as a cop-reporter team tries to solve a series of murders. It also contains the de rigeur bizarre cabaret setting common to a number of these films.

16. 13 Assassins (2010: 9) Directed by Takashi Miike, whose work I find kind of hit or miss. This remake of a 1963 film with the same title is a little short on characterization but has everything you could ask for in terms of action, and, at the end, an unexpected fantasy twist. The original 13 Assassins is also recommended.

15. K-20: Legend of the Mask [AKA: K-20: The Fiend With Twenty Faces] (2008: 9) The main characters in K-20 originally appeared in a series of stories by Taro Hirai (1894-1965), who was so influenced by western literature that he took the pen name Edogawa Rampo, although in this case his template was more Arthur Conan Doyle than Edgar Allan Poe. Kogoro Akechi, his eccentric consulting detective, first appeared in 1925. The Moriarity to this particular Holmes was Kaijin Nijn Menso, nicknamed The Fiend With Twenty Faces. This film is based upon later pastiches, which I suspect upset purists but does provide for a tumultuous roller coaster of a film.

K-20 is set in an alternate 1949 where World War II never took place and Japan is dominated by the aristocratic class. In a dazzling combination of sets in turn noirish and futuristic, the movie opens with Kogoro Akechi hot on the trail of K-20, who’s hired the naive circus acrobat Hekichi Endo to snap some innocent photos (or so Endo thinks) but really to take the blame for his latest criminal venture. Akechi pursues Endo, in turns helped and hindered by Princess Yoko Hashiba, to whom he’s engaged, who falls for the initially feckless Endo when he opens her eyes to the misery of the lower classes. Plot elements include the Tunguska Incident, ginormous Tesla coils, gyrocopters, and a great abundance of capes and masks, not to mention a number of devices that Batman would envy. It sags a little in the middle, but, damn, these guys have the pulp atmosphere down pat. They’d make a great Shadow movie. Or maybe the Spider. 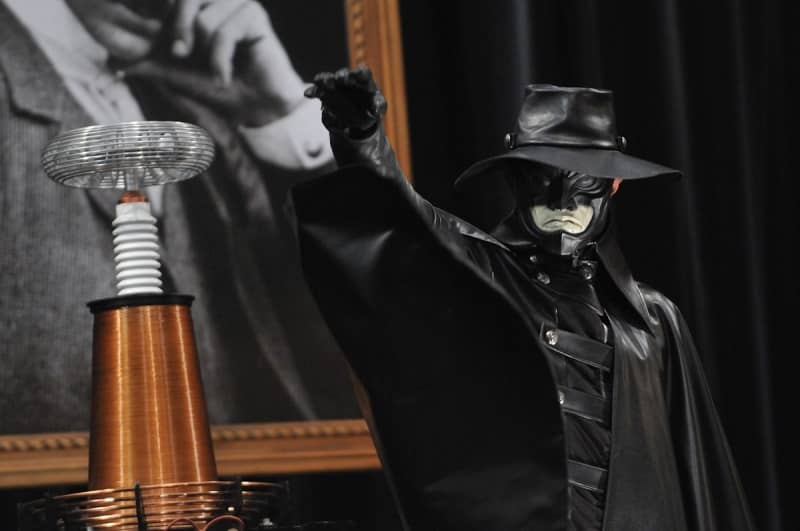 K-20: Legend of the Mask: Nippon TV, Distributed by Toho

14. Lone Wolf and Cub: The Sword of Vengeance (1972: 9) First entry in the series of Ogami Itto, the Shogun’s executioner, who, set up by the Yagu Clan (who also murders his family), decides to walk the road of vengeance instead of committing seppuku, taking his infant son along. The entire series is worthwhile viewing, but in this case you’ve got to start at the beginning.

13. Kill! (1968: 9) Two wandering swordsmen, an ex-samurai and a wanna-be samurai, get caught up in a complicated political scheme, ending up on opposite sides of the deadly imbroglio. Often billed as an action-comedy, many of the film’s comedic aspects might be lost on those not intimate with the intricacies of Japanese society, but it’s still an absorbing and entertaining ride.

12. Tampopo (1985: 9) A comedy about food. Basically, The Searchers with the Natalie Wood role played by a bowl of noodles. 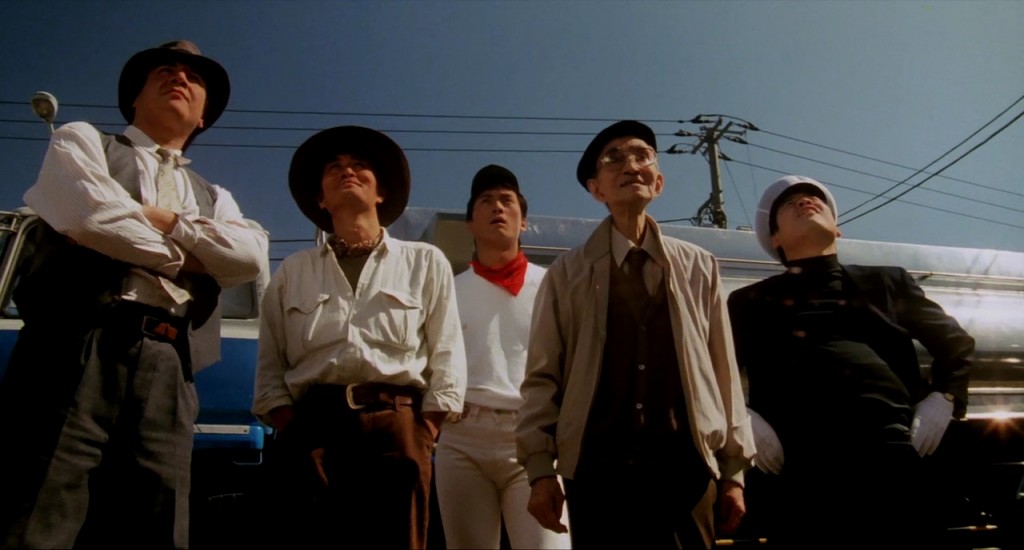 11. The Hidden Fortress (1958: 9) Excellent Kurosawa historical adventure starring Toshiro Mifune. A first-rate a blend of action, comedy, and drama acknowledged by George Lucas as an inspiration for Star Wars, especially in using the point of view of the lowliest characters to tell much of the story. In this case it’s a pair of feckless peasants who continually find themselves over their heads in the events in which they become embroiled.

10. Battle Royale (2000: 9+) So, you’ve probably heard about this movie set in a dystopic future where a corrupt government has a program where teenagers hunt and kill each other? No, not that one. This one. Battle Royale occurs for the usual reason. Teenagers are pissing off the adults, but this time the adults decide to get nasty about it. The government secretly chooses a random ninth grade class, gasses them while they’re happily going on their class trip, and dumps them on a small abandoned island. The worst teacher in the world (played with utter lack of emotion by Takeshi “Beat” Kitano) oversees the contest. Each is given a backpack with a more or less useful weapon or tool, a bottle of a water, and a bit of food. They’re also given a collar that’ll blow their head off if they break any of the game’s rules, or if Kitano feels like it. The contest lasts three days. Last student standing gets to live. Of course, immediate mayhem and chaos ensues.

9. High and Low (1963: 10): Kurosawa, again. Loosely based on Ed McBain’s novel King’s Ransom, a literal translation of the Japanese title would be the more evocative Heaven and Hell. A police procedural starring Toshiro Mifune as the manager of a shoe factory embroiled in a kidnapping gone wrong, and the extraordinary efforts the police go through to solve the case.

8. Vampire Hunter D: Bloodlust (2000: 10): Some of the finest Japanese animation outside of Miyazaki, a good script, and a well-depicted milieu makes for an outstanding film of a future world over run by aristocratic vampires. The ultimate in Gothic Romanticism. 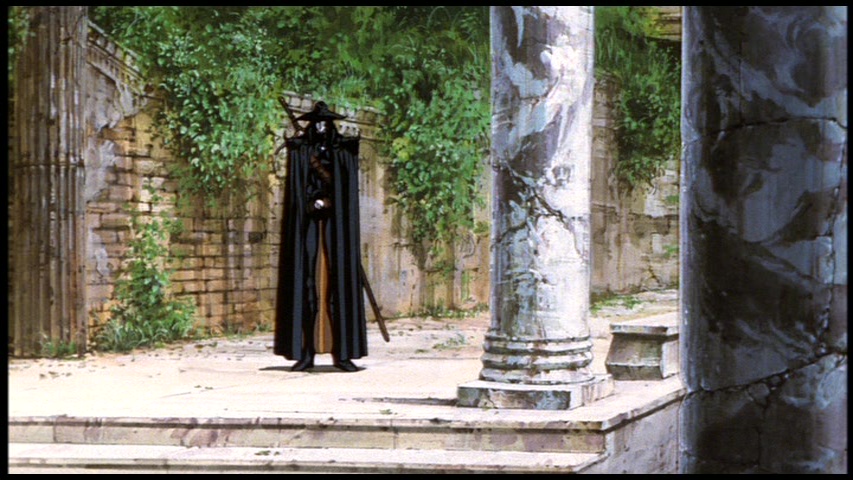 7. Sleepy Eyes of Death (sometimes referred to as the Son of Black Mass) is a series of jidaigeki (historical) novels written by Renzaburō Shibata. From 1963 to 1969, Ichikawa Raizo played the titular character, the ronin Nemuri Kyoshiro in twelve Daiei films, until his untimely death at the age of 37 due to cancer.  All are good, though I found the final two a little too dark and/or loosely plotted. The usual strategy would be to watch these in order, though I would especially recommend the third film, Full Circle Killing (1964: 10), where all the elements of the series really come together. The best of these films are imbued with a strange fantasy sensibility pretty much like High Plains Drifter, where they never come out and say it but you know that something weird is going on.

6. There had to be a Zatoichi – the blind swordsman of the Late Edo period (1830s-1840s) – movie on this list. I’ve seen many of the twenty-six (1962-1989) in the first series starring Shintaro Katsu, who also played the role on television for a hundred episode run in the 1970s, but the particular film I’d like to mention here is Zatoichi (in America The Blind Swordsman: Zatoichi) starring Takeshi Kitano (2003: 10).

5. Stray Dog (1949: 10) Yeah, there’s a lot of Kurosawa-Mifune movies on this list, but what can you do? They made a lot of great movies together. In this one Mifune is a rookie homicide cop who gets his pistol pick-pocketed while taking the bus and the rest is a relentless police procedural tracking it down. I particularly found 1949 Tokyo, only four years removed from the end of World War II, a fascinating setting, . 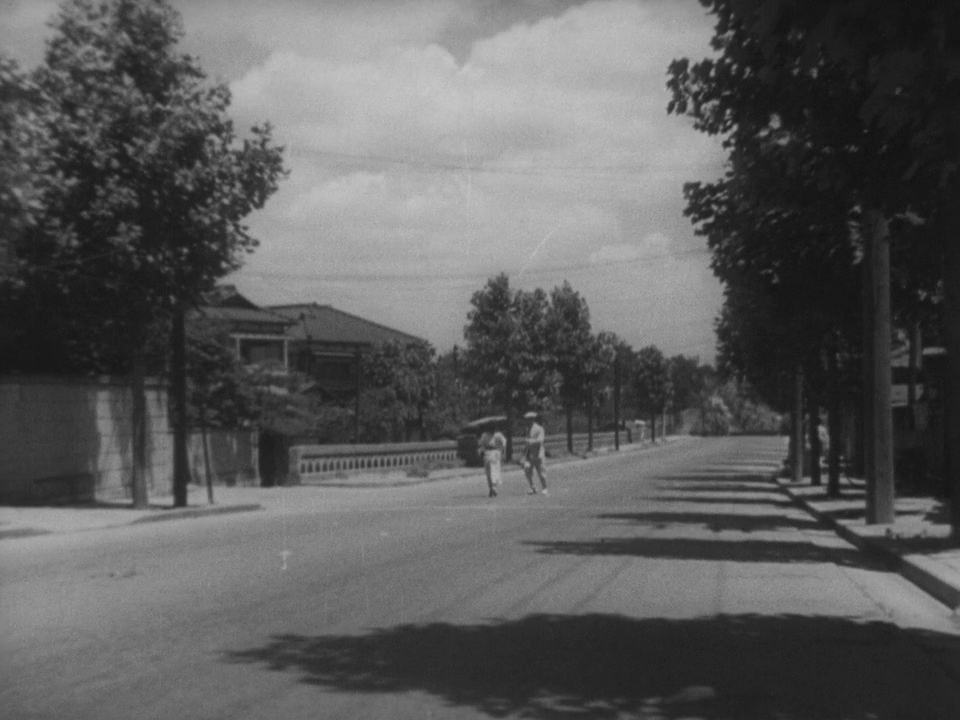 4. My Neighbor Tortoro (1988: 10+) Something completely different. A gentle and charming film, the first Miyazaki I saw and one of my favorites. Beautiful and lyrical.

3. Yojimbo (1961: 10+) Kurosawa states that this film was influenced by film made of Dashiell Hammet’s novel The Glass Key, though the plot of another of his novels, Red Harvest, is even closer. In any case, Toshiro Mifune shines as the disreputable ronin who wanderers into town and takes out the trash. 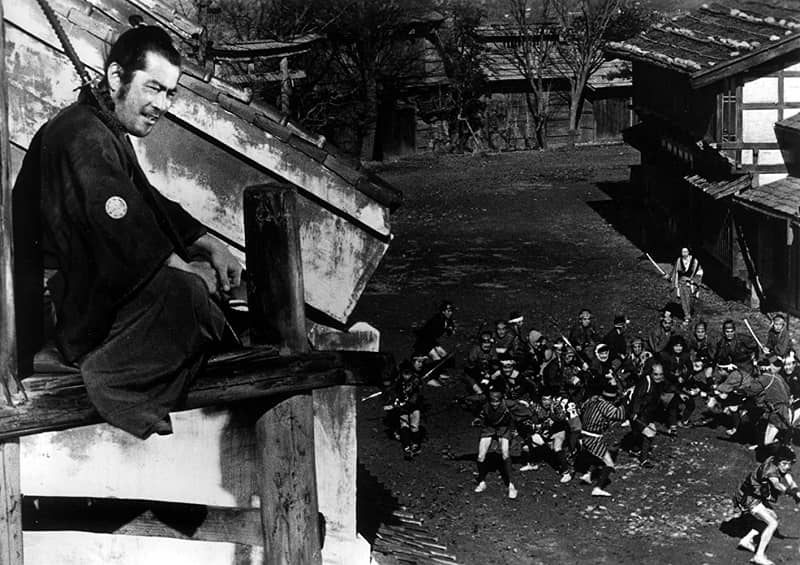 2. Sanjuro (1962: 10+) Kurosawa’s follow-up to Yojimbo, which proved to be such a big hit that they rewrote the screenplay for this one to incorporate the same character, though he chooses a different, but similar non de plum in this one. Mifune also runs in a rather higher level of society, but still takes out the trash in his inimitable fashion.

1. Seven Samurai (1954: 10+) Kurosawa and Mifune yet again, but this time Mifune is backed up by one of the greatest casts ever assembled. You know it’s a hard call, but this is my favorite movie of all time, especially when you consider that it was made only nine years after World War II. You all know what it’s about. It’s the 19th rated movie of all time on IMDB, but what do they know? Fight Club is at #11. 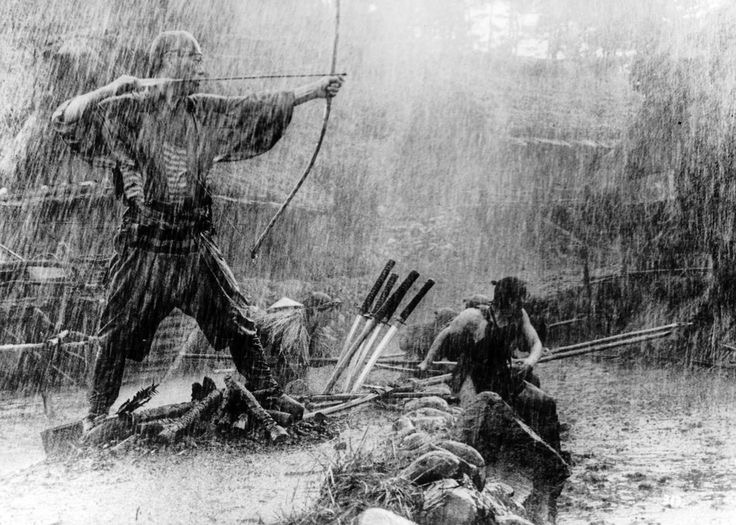 Other Film posts on Black Gate:

19 1950’s SF Movies To Help Get You Through the Next Few Weeks
Son of 19 Movies: The Good, the Bad, and the Weird Edition

I’ve seen it suggested that The Mandalorian owes at least as much to Lone Wolf and Cub as Star Wars does to The Hidden Fortress, I need to get hold of a copy.

Haven’t seen The Mandalorian, as I don’t subscribe to the streaming service that covers it, but I have heard a lot of good things about it.

What, no Tetsuo – the iron man?
The granddaddy of japanese cyberpunk?

I always thought Grand Guignol was more about amoral behaviour and lots of blood.

Maybe surreal body horror? Tetsuo is kind of its own genre.

However, it does leave its viewer with a lasting impression, even if that impression is “WTF was THAT?”. And the music is quite good if you are into the industrial stuff.

Anyway, thanks for that blog post, now i need to track down a copy of K-20 and the Daimajin trilogy …

That would describe TETSUO to a degree, but “surreal body horror” is a pretty good fit, but then I’m not one for labeling. Glad you liked the post. I took a quick look at eBay and Amazon, and was surprised to see that DAIMAJIN has reached a somewhat pricey level (I’ve had my copies for a long time; watch out for the more cheaply priced one on Amazon as it seems to be a crappy rip-off) but K-20 seems in good supply (at least on eBay).